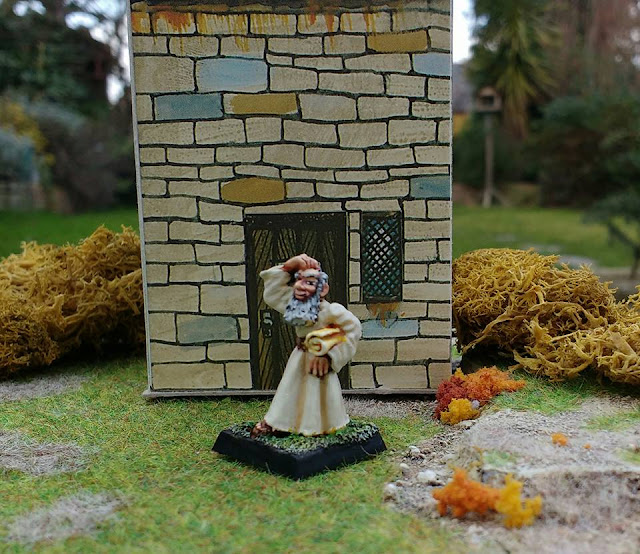 Last post I waffled on about how my next painting project was to be the Talisman Philosopher - and here he is- as I acquired him last weekend in a trade with Stuart Klatcheff and I was keen to get him painted up as soon as possible. I tinkered away at him all week (as it is half-term) and really enjoyed the leisurely pace I set for myself rather than my usual 'get 'em finished in under two hours' style.

This miniature derives from the Talisman range (obviously) released by Citadel in 1985 in support of the 2nd Edition of the game. According to my research this philosophical chap was part of Talisman Expansion and was available in a blister alongside a barbarian and a pilgrim. What a strange bunch?

His was painted entirely with Foundry paints, save an ink wash or two and despite looking rather circumspect, he wasn't as straight forwards to finish as I was expecting. I began work on his face by giving him a 2:1 basecoat of flesh and red and highlighted by adding increasing amounts of flesh to the mix. The brightest flesh tone Foundry do (Expert triad) was then used to pick out the final highlights around the nose and checks, as well as picking out the details on the hands. His eyes were painted black and two smaller white dots were then added to the corners - my preferred method for painting human eyes.

His beard was basecoated in grey and given a dark grey ink wash. This was then highlighted again in layers, adding incresingly brighter tones to the initial mix. I avoided using white to highlight his hair, sticking to the more subtle Boneyard C to avoid him looking too ancient and decrepid.

His robe took me a couple of attempts to get right. I didn't want him looking too white (like the druid I painted a few years back) and again I opted for my favourite ever set of paints - Boneyard. The middle tone was used as a base and washed over with the darker tone. It was then a simple case of working up the highlights through the triad, mixing the two tones together as I worked through them. I added a few drops of water to each mix to ensure the paint flowed quite thinly onto the model and allowed the colours to blend together. I wanted to achieve a colour similar to linen and I am pleased to report that I am more than satisfied with the result.

His scroll was painted yellow and washed over with chestnut ink. I highlighted up with the yellow triad and mixed in a little Boneyard 9c into the final tone to help smooth out the colour and ensure the parchment looked like parchment. Then it was a simple case of using a brown triad to highlight up his belt and sandals. A tiny touch of gold finished off his belt buckle nicely.

Thanks to the joys of winter, there wasn't much natural light to capture him in all his glory - but these pictures will do at a pinch. 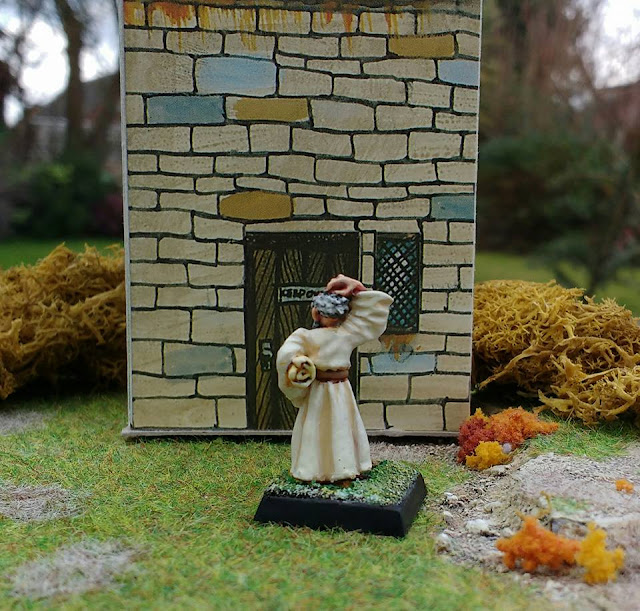