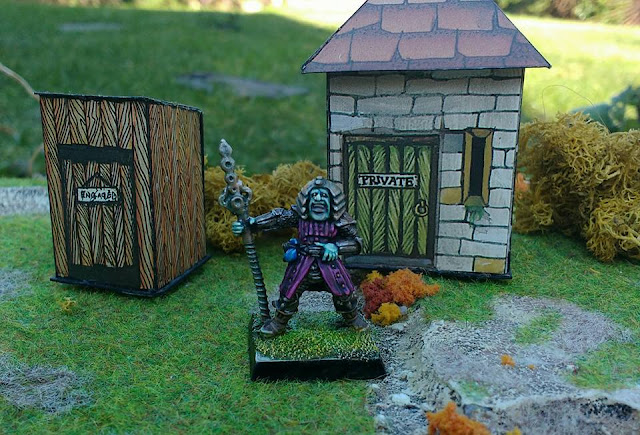 Eager to hear the rattle of brushes in water after the excitement of Lead of Winter last Saturday, I got back to work early Sunday morning and managed to get this figure finished off. He has been one of those 'unfinishables' for a while if I am being honest and has lurked reprovingly at the back of my bureau for some months.

I have had this miniature for quite a few years and have no idea if he was an eBay purchase or the relic of some long forgotten exchange. He has always struck me as unusal as he doesn't seem to crop up very often. Once, in the early days of our flirtations with using Facebook to trade miniatures, some punter popped up specifically searching for him, citing him as the 'chaos judge' and to be fair he does have the whiff of the bar about him. I think it has something to do with the shape of his helmet (careful, Chico!) as from the front it does resemble the ornate whigs that lawyers seem happy to wear when defending the world's nefarious rich.

But after about thirty-seconds research on-line, I sourced the figure to a 1985 flyer you can see below. It turns out that he is a C35 Guardsman, though clearly of the corpulant variety.

The model clearly suffered some damage in my care and the tip of his staff had pretty much snapped away. I filed down the break and pinned it back on fairly easily and undercoated him in white. As he looked rather sickly I opted for a Nurglesque colour scheme though looking at the model now he could probably pass muster in any Slaanesh force too.

I didn't beat about the bush either with the painting, using a variety of simple layered highlights and washes to complete everything from the rusting armour to his long padded jacket. All in all, the perfect model to get my eye back in before moving on to more challenging pieces.

I hope you all like him. Next up, the Talisman Philosopher that I just swapped with Stuart and I am quite keen to get finished. I love wizardy type miniatures you see!