Last time we spoke I promised something a little historical, but still vaguely in the Oldhammer vibe - and here it is! A lovely Bronze Age figure by Michael Perry and produced by the Wargames Foundry. This range has been a dirty little secret of mine for some years now and I have been slowly collecting the different packs, but like so many of us neglected to even pop open the blister pack and get cracking.

Well, that has all changed with the addition of this sultry girl to my collection. For the last two weeks I have gone cold turkey (almost, I wasn't that brave) on all of the prescription medicine I was on and I am now thankfully off the stuff. One of the drugs I was given has recently cropped up in the media (in typical sensational and ill-reported fashion) though they only thing I murdered on the stuff were the weeds in my garden. It seems my seizures and illness were simply side effects of these powerful medicines rather than the urology problems that I was originally suffering from.

Now that WHS (wobbly-hand-syndrome) has passed, I am back at work on my cluttered workstation and hope to be able to post more regularly. But enough of my woes... on to the model itself. Despite having a degree in archaeology I knew very little about clothing in the Bronze Age and was keen to get the look of the figure correct. Little did I know that Michael Perry hadn't simply conjured up a random prehsitoric person in this tiny figure but actually based her of a very significant find that has become known as the 'Egtved Girl'. 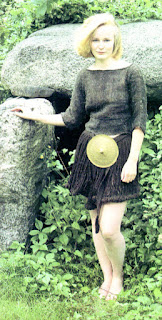 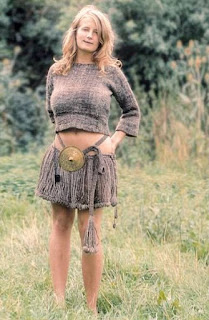 She was a Nordic Bronze Age girl whose well preserved remains were discovered outside Egtved (archaeological custom often names finds after their modern location) in Denmark in 1921. Forensic examination of her remains suggested that she was around 18 years old when she died and was a slim, five foot three in height with short, blonde hair and well groomed nails. She was excavated (if such a verb can be applied to the techniques of the 1920s) alongside the cremated remains of a 5 year old child in a barrow thirty metres wide and about four metres in hight. Sadly, only her hair, brain, teeth, nails and a small sample of her skin has survived.

Her inhumation was interred inside a east/west aligned treetrunk coffin and was discovererd fully dressed lying on a cowhide blanket. Dendrochronological investigation of the treetrunk coffin dated the burial to around 1370 BC - and that is almost certainly the year the tree was felled. She wore a loose bodice type garment, which exposed her midriff, with sleeves that reached to her elbows and a short, string skirt. On her arms were found bronze bracelets and around her waist (secured by a woollen belt) was a large disc ornament decorated with spiral designs and a protruding spike. Dangling within easy reach from this same belt, was a fine horn comb suggesting that preening and postering with a hairbrush was a vital part of a woman's life even then! I am of course being facetious here, as combs are a very common find archaeologically as they were essential for removing the insects that like to set up home in our hair, as well as maintaining the latest styles!

A slender, subtle golden ring adorned one of her ears indicating that piercing was just in vogue then as it is now, even amongst the more extreme grognards I have met (such as Chico.) A small, birchwood box containing an awl, bronze pins and a hair net was found alongside of her head, presumably her personal possessions most suited to the next life, though intriguingly some smaller bones from the younger child were also found inside. Why? Interpreting the past is always a tricky business, and it is hard not to let your own social and national bias effect theory. It could be suggested that the younger child pre-deceased the Egtved girl (especially considering they bear the unmistakable signs of being burnt) if their bones were part of her possessions, though we cannot be sure if they were not indeed added by those who buried her for reasons lost to us. The more romatically inclined may seek to relate the two burials to close family, with the child perhaps being a sibling or child of the Egtved Girl, but such associations are always going to be risky and hard to prove without further analysis. The child may have been totally unrelated to her and could have been a slave, presumably killed to accompany her mistress into the afterlife. Evidence for human scarifice, that most 'Hollywood' of historical subjects, is prevalent in the region in which the Egtved girl lived and there is plenty of scope to suggest that both the child, and Egtved herself, could have befallen this fate.

We will never know.

Analysis of the grave goods yielded further information. Before the coffin was originally sealed, she was covered with a blanket and the cowhide and wrapped carefully in them. Flowering yarrow (a plant which to this day can symbolise protection) was then placed above her body, strongly suggesting a summer burial. Much like 16 year old European girls of today, booze (in this case a beer brewed from wheat, honey, bog-myrtle and cowberries) was clearly part of her life and was deposited on top of her in a bark bucket - which can be clearly seen on the modern miniature, nestled protectively under her arm. Whether or not drinking the stuff in the copious quanities teenagers do today was part of her life, or if indeed the alcoholic drink was some part of the funeral custom of the time, is impossible to say. Though, some modern imbiber has produced a modern version of the beverage for the curious, based on analysis of the recipe and can be purchased here.

Her clothing caused a sensation in the press when unearthed in the 1920s and was seen as incredibly daring in the days of the flapper girl. The outfit, which remains the best preserved example of a fashion style now understood to be common across Northern Europe during the Bronze Age. If you are wondering why the preservation of the textiles was so remarkable, yet the physical, fleshy remains were so poor then let me explain. The highly acidic bog like conditions in which she was buried are often highly anaerobic and the resulting lack of oxygen prevents bacteria from surviving, and therefore decomposing the body. The preservational qualities of bogs are myriad, complex and varied and are far beyond the scope and remit of this blog, but the science is really rather interesting and well worth further pursuit.

The Victorian myth that prehsitoric people's lives were 'nasty, brutish and short' is very unfair but still very much part of the public's perception of the past. Pretty much like the modern powergamer's misconception that any other form of miniature wargaming that doesn't involve army lists and rules loopholes is somehow an affront to the hobby. The isotopes extracted from the Egtved Girl's remains indicate that it is likely she was born and brought up in what we now call the Black Forest region, in southwestern Germany but later moved to Denmark (presumably, but not definitely, due to the marraige customs of the time) with the evidence suggesting that she travelled back and forth between these two locations during her lifetime. How can we know this, you may ask? Well, the answer is actually quite simple: strontium-87 and 86 are isotopes found in the water we drink and can be matched to locations to this day. These isotopes can be stored in our teeth as we grow and can be read much like a tree-ring under extensive analysis in the modern laboratory.

If we can return to her clothing once again and discuss the significance of her outfit a little closer. Were these everyday clothes for people living in the European Bronze Age? Or should we interpret them to be religious vestments worn to celebrate some type of religious observations. Many archaeologists certainly debate this, suggesting that the bronze disk represents some kind of sun worship and the Egtved Girl's outfit could have been worn as part of a religious dance with the shining, reflective bronze surface mimicking the sun's light. There are a number of bronze statues excavated from the Bronze Age that appear to show females dressed in similar clothes, but it is all interpretation.  Of course, anything that archaeologists do not understand is always pegged as having a 'ritual' purpose, so much so as it has become a bit of an in-joke to students of the subject, albeit a painful one for some. On the other hand, we could just be looking at the 'high-street' fashion of circa 1370 BC and if that is the case, things haven't really changed much have they?

As I have already said, we cannot always be sure what colour textiles from the European Bronze Age actually were, though we can have a jolly good guess. After studying numerous replica outfits from Denmark I stuck the the brown look you can see on the figure, though to create a bit of variation between the string skirt and the bodice I opted for a paler tone for her upper half. Unusually for me, I undercoated this figure in dark brown and washed her over with a dark brown ink before beginning work. Each colour was then worked up using my usual method of adding increasing amounts of Boneyard to the base until I was happy with the final highlight. As with the blue horror I painted recently, colour harmony played a part in all the tones save the bronze of her waist disc and her eyes.

To conclude, this historical miniature experience has been a really enjoyable journey. What started out as just another figure from a blister pack turned into a fascinating research project and a challenging paint scheme. Thankfully, I have the remaining figures in the range to finish (including a dancing version of the Egtved Girl) and all are under various states of completion. If you are interested in learning more about the European Bronze Age there are loads of resources out there that a simple Google search will make available. In my researches I did stumble across a rather atmospheric and illuminating video on Youtube that is well worth a watch to help better understand the world of the Egtved Girl and our European ancestors.