There and back again... with a blue horror! 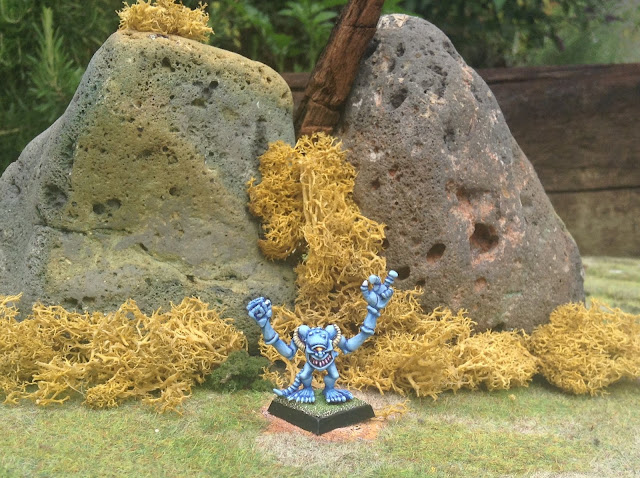 Well met once more brave grognards of the lead! It is a good feeling to be speaking to you once more here on the blogosphere and sharing this charming (if such an adjective can be applied to daemonic entities) Kev Adams blue horror from 1989.

My health declined from March onwards as I needed a nasty operation. To cut a long story short, after the surgery I developed complications and was prescribed a series of medicines: sadly, these caused me to suffer a massive siezure which sent me to hospital. Though well enough afterwards to return home, I continued to suffer further seizures, hallucinations and other general unpleasantness until I was diagnosed with a severe allergic reaction to amitriptyline.

I am now recovering, thankfully, and should be back to my normal self in a few weeks time. Having spent the past three or four weeks largely in bed, I was keen to get back on the battlefield and take on a miniature or two. Obviously, I was concerned that my illness would have had an impact on my painting ability, but apart from loosing my alarity with paint I was able to knock out this grining horror in three or four leisurely hours.

I so enjoyed working on him that I have fished out the other blue horrors in my collection and will be setting forth painting them up over the next week or so. If you are interested in my recipe for this model it was really quite simple. I used Foundry's Sky Blue A as a base coat (over a white undercoat) and washed over with the old 1980s blue Citadel ink, undiluted. Once this was dry, I repainted the skin of the horror with Sky Blue A and added pure white gradually to blend up the highlights until I was satisfied that the model 'popped' to quote Warlord Paul.

I used colour harmony on the teeth and horns, adding a tiny amount of Sky Blue A to the Boneyard triad and simply highlighted up, using far more white on the final coat for the needle like teeth. Using the classic '80s purple ink (I know they are not the best quality-wise, but the colours they produce so envisage the classic era that they are well worth tracking down) I prepared a watery glaze and washed over the teeth to give them a slight contrast to the flesh.

The eye was achieved in a slightly different way. I first picked it out in pure white before painting the orb of the eye in orange. Two yellow highlights were then added (again by adding pure white) and the eye was finished off with the same purple glaze used on the teeth.

Very simple, easy and effective for my first model in many months. Here is a rear shot, worthy or the Ole Dirty Boye himself, Chico (it is even slightly out of focus!) I actually painted this long after the front half of the model, so it doesn't quite match the paleness of the front view, but no matter. I have also been working on a number of historical miniatures from the Perry's. They are very similar in style to Citadel that they feel quite familiar under the brush. I only tinker with them, a guilty pleasure really, but I hope you don't mind me posting these here in the future, as I have no where else to show 'em off! 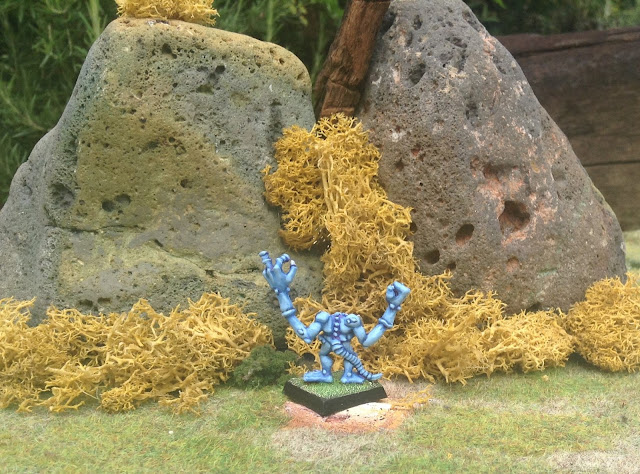