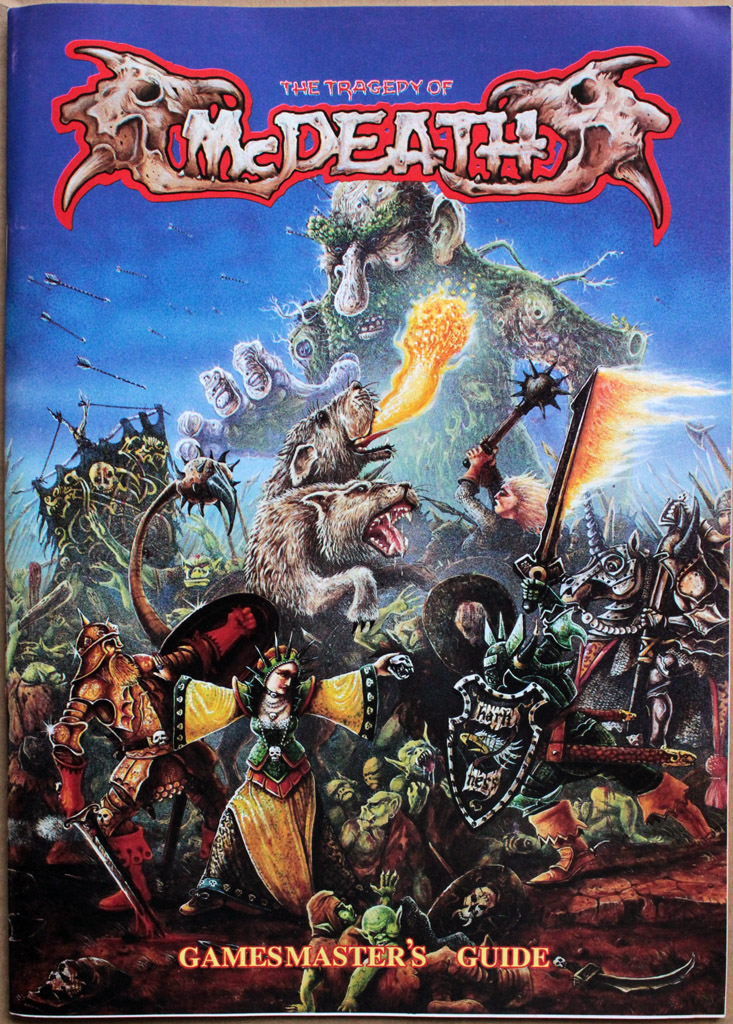 This blog post has been a long time coming. I have been thinking about writing it on and off for several years and I guess today just happens to be today! It has been inspired by my quest to acquire all of the McDeath figures (something I have yet to achieve, as I am still missing the giant model and Sandra Prangle) and my passion for recreating this wonderful Richard Halliwell scenario.

Those readers out there not over familiar with the McDeath set may not have ever lain eyes on the artwork for the card counters that came with the box set. Old hands will be well aware of the classic era of cardboard cut out models. Many '80s games came with them and McDeath was no different. They provided an opportunity for cash strapped gamers to use the scenarios without the correct forces in lead.

Now, there were loads of card counters in the book and I have scanned a small sample here to illustrate my point. 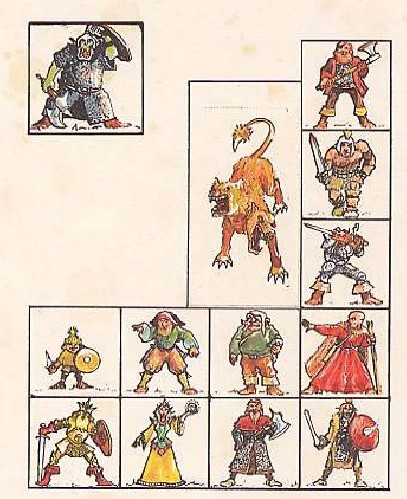 Now the first thing that will strike you if you are familiar with my McDeath project is how similar many of the colour schemes are to my painted models. This is not coincidence as I always sought inspiration for my figures from the original artwork. If I liked the way the art looked - I copied the colour selection and if I didn't, I chose the scheme that best suited me.

What struck me working with the source material was that a great deal of the models looked identical to the artwork, almost as if they had been drawn from life. Just look at Mogro Neckbreak in the artwork above and my finished example below. It is very clearly the same model with a few positional differences. 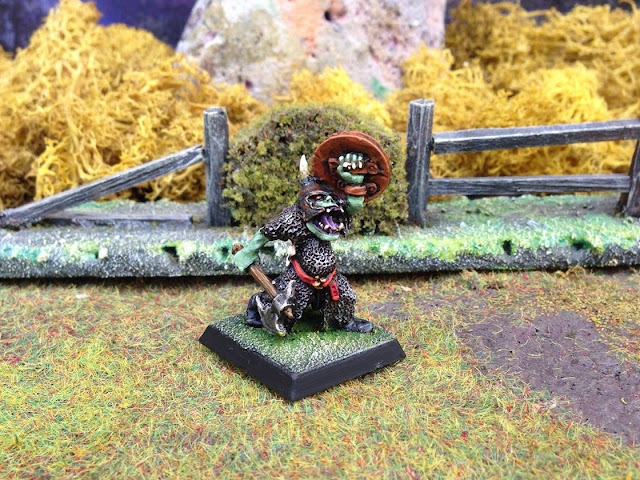 Spot, Lady McDeath's fearsome hound, doesn't look enormously similar to the figure I use but I know for a fact that the different pre-slotta models were sent out to purchasers back in the 1980s, and the artwork on the card counter looks very similar to the models in the range. So no surprises here.

Take a look below and compare with the top image and make up your own mind.

Juggo seems to have followed Alice into the rabbit hole and mistaken the 'Drink Me' bottle for hard liquor as he has had a serious case of 'The Shrinks' when you compare him to his original card illustration. Yes, that is him top right. The original image is clearly a human figure (and more on him later on in this post) while the 'official' model is of course a dwarf.

This got me thinking 'why the change?' A fluff mix up? The disappearance of the original figure? I guess we will never know. What we can be sure of is that some of the illustrations are bang on, while others are a million miles off the mark. Are there other models out there that may have one day been intended for the McDeath scenario? It certainly got me thinking. 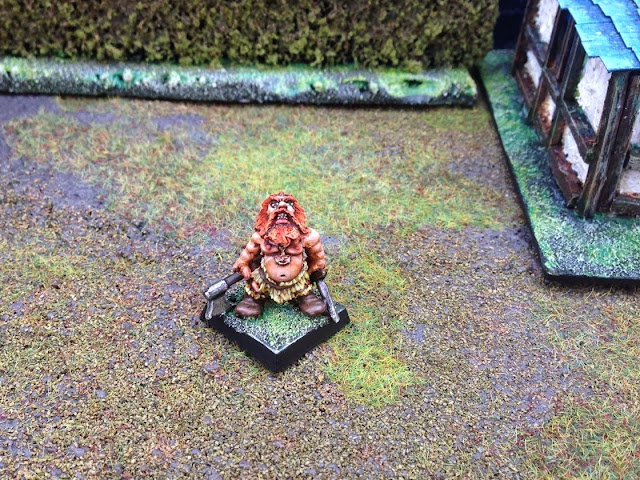 Fergus, that muscle bound thug of the McEwman clan, looks identical to his cardboard equivalent, his is just drawn from a different angle than my photograph below. Obviously, it is the same figure. But if Fergus survived the design process unscathed why not Juggo? And to make matters even more confusing there is another trollslayer figure out there in Citadel collecting with Juggo on the tab!! Can the real Juggo please stand up? 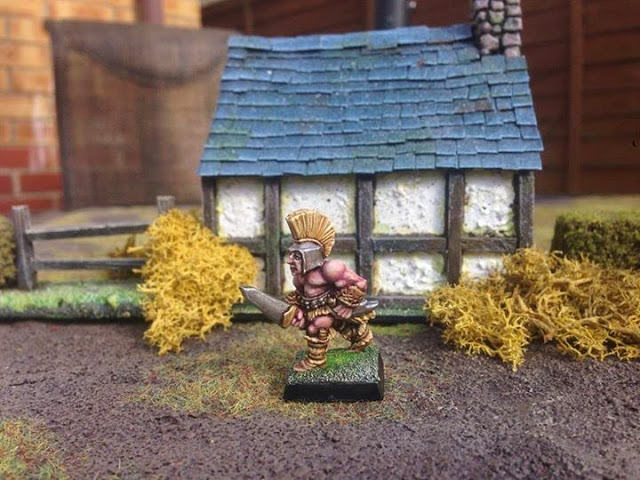 Julia doesn't appear on the cut out scan I shared above but the figure selected for release matches her closely. You can see that it is clearly her in the artwork if you go and look. Dokko, positioned bottom right on the cardboard counter image, again looks strikingly like the model released to represent him. Problems arise again when we take a look at Donaldbane. Compare my painted figure with him on the card counter, I have circled him in red. 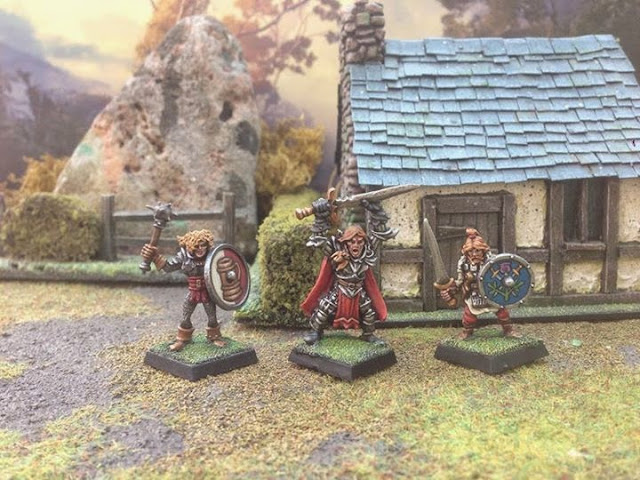 It's clear as day that the two designs are utterly different, though similarly armed. Again, that question raises its head. If Julia and Dokko are bang on the money, then why not Donaldbane? 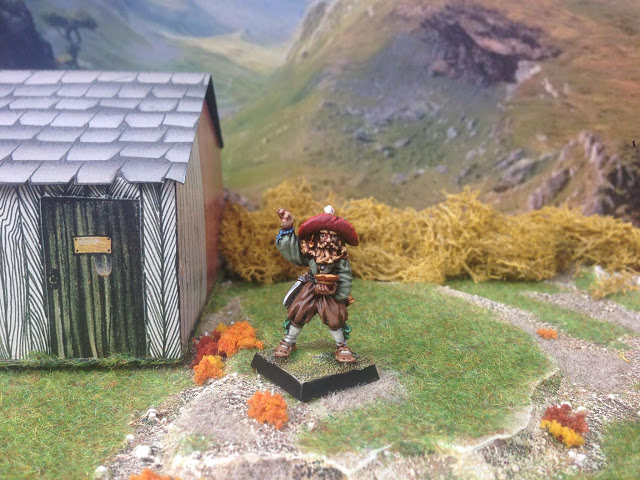 Though McWrecker is posed differently in the artwork and lacks his magic bowl it is very clearly the same figure, or indeed a variant of the model released. The differences are not so stark as they have been with Donaldbane and Juggo. Glancing at Brooben it's plain to see that they are near identical, almost as if drawn from life. 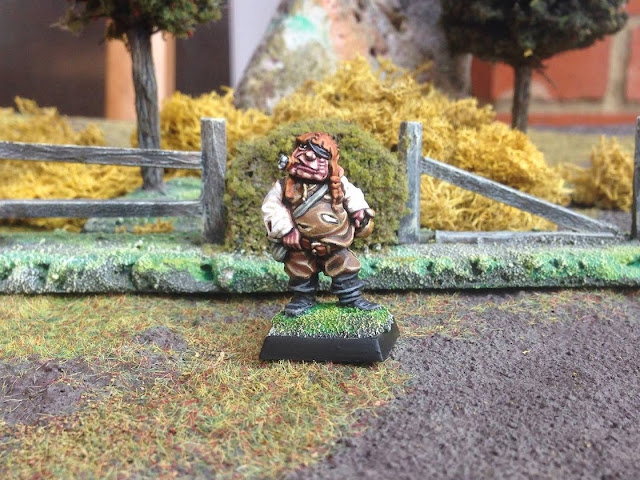 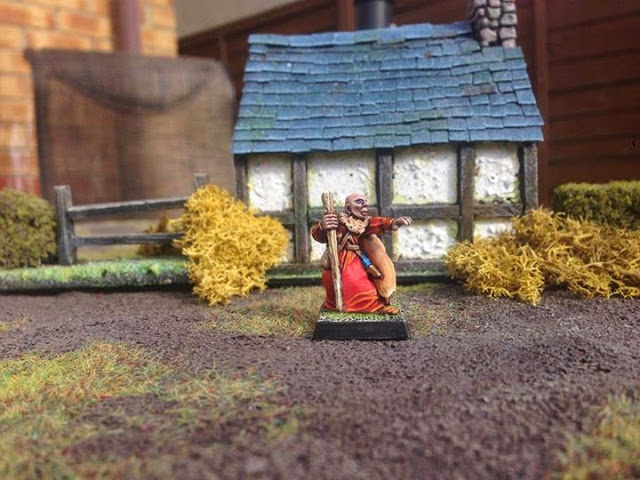 As do the iconic Lord and Lady McDeath, beyond a few minor differences. 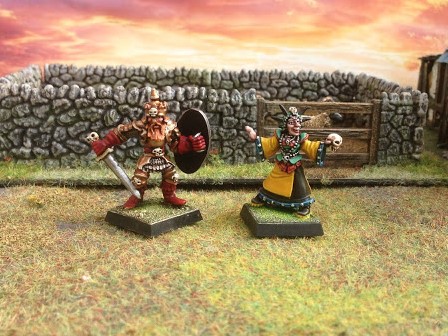 Things go awry once again with the halfling, Raybees, who looked completely different to his card counter version even though Banquo matches pretty strongly. Take a look, I have circled the card version of Raybees in blue. Why the difference? It is certainly intriguing if you are a collector and a fan of minutae like me. But surely there couldn't be any 'lost' figures out there I hear you ask? This is surely just the rambling of a man who has sniffed one to many jars of Dettol in his life. To be honest, I would heartily agree with you if it wasn't for one thing... 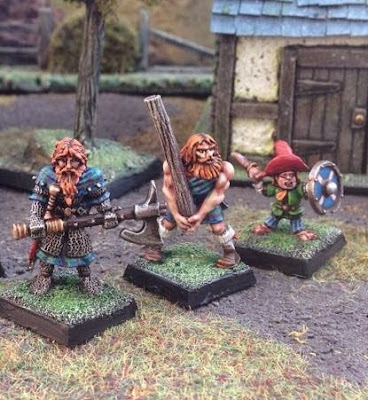 I have found an exact match for the original Juggo illustration, minus an eyepatch - the woodcutter from the villagers/rangers/townsfolk set! Compare the two - I am quite correct am I not? They even share that most essential of '80s fashion items (see Arnie's Commando film for further reference) - the chainmail vest! 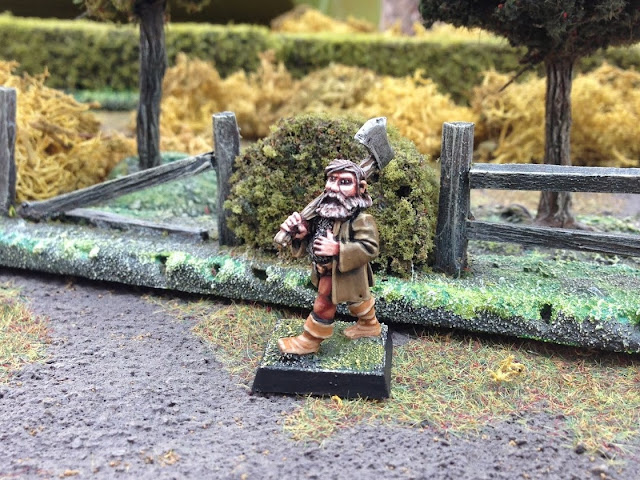 This discovery leads on to another question. If there is a clear match to the original Juggo picture why not the two other examples?

Have a closer look at the original artwork for Raybees (in blue) and Donaldbane in red. As I am not an exhaustive expert on every Citadel range, particularly the pre-slotta stuff, it could well be that these models are 'out there' just as the original Juggo is. Anyone recognise these designs in any actual released models? If so please do drop me a line as I would love to have my suspicions confirmed, or crushed utterly!!

But even with the irregularities of Raybees and Donaldbane left on the table, this story isn't quite complete as there is another character mentioned in McDeath (albeit very, very briefly- you really will miss him if you blink) who has a card counter to represent him.

You can see him on the far right circled in red. I have heard in several McDeath collecting circles that there is a zombie model out there that resembles this illustration very closely. I have searched the ranges in hoping of spotting this model but have failed utterly.

Do you recognise him?

So esteemed members of the Oldhammer Community. Can any of you help unravel my conundrums?

Are there really 'lost' scenario figures out there for McDeath?