Return of the Mighty Avenger: A second interview with Bryan Ansell 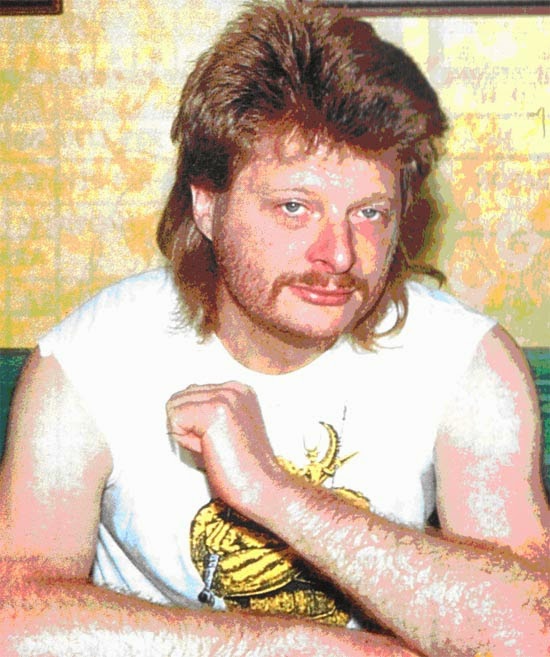 1,000,000 page views, more than that now you are reading this post, deserves some sort of recognition. And what better than a second chat with the man behind it all, Bryan Ansell, the visionary responsible for Citadel's early days and owner of the Wargames Foundry and Stoke Hall.

Unless you are new to this blog, you will know that I have been carrying out a series of interviews with many of the creative minds behind the massive success of Warhammer in the 1980s. Artists such as Gary Chalk, Tony Ackland and Tony Hough have discussed their work and influences, we have heard from members of the 'Eavy Metal team via Andy Craig and the man who ran them, Phil Lewis. Design Studio stalwarts Rick Priestley, Mike Brunton, Andy Chambers, Tim Pollard, Paul Cockburn, Phil Gallagher and Graeme Davis have provided us with the behind the scenes detail that many of us find so fascinating. Kev 'Goblinmaster' Adams shared his stories about life as a miniature sculptor during the period, Jamie Sims spoke to us about the Asgard Days while Guy Carpenter provided us with lots of insight to life in the retail part of the business.

Its been quite a journey... are you ready to go on one more?

I have been lucky enough to meet Bryan a few times, and I have been luckier still to get a bit of a guided tour of his stately home - including the enormous cabinets of his miniature collection and the incredible room with the painted Wayne England murals. To walk through those corridors and gaze in wonderment at objects you have studied for over twenty-five years is a peculiar experience I can tell you. Last summer, I had the opportunity to speak to Bryan again in detail about his time running Games Workshop and this interview is the result of those discussions.

I have been saving it for a special occasion!

RoC80s: For many, many years one of the more infamous things associated with your tenure in charge was the 'SOD OFF BRYAN ANSELL'  in White Dwarf issue 77. Care to share your side of the story?

BA: When I took over running games workshop all those years ago, the first priority was to close down the London office.  All they did was publish White Dwarf, distribute imported American products and complain that Warhammer was puerile. We had taken over all other publishing duties at Citadel some time earlier. Space was expensive in London and Games Workshop was extraordinarily overstaffed. However, things were moving along nicely in Eastwood and at the Nottingham Studio and we felt that we would be able to find useful work in Nottinghamshire for any or all of the London staff who wanted to move.

In the event: ten or so of the London staff came to us.

The White Dwarf staff didn’t move up.  This wasn’t entirely a surprise, as they had savagely resisted our attempts to put Warhammer material into WD.  Despite the quite obvious fact that the only thing keeping Games Workshop rolling was our awful fantasy battle game. I suppose that “sod off ” is the sophisticated London gamers equivalent of “thanks very much for the offer: but we’re going to have to pass this time.”

Unfortunately, we did have to fire a number of the ex-London staff for stealing not long after they joined us. Mac Coxhead was in charge of one half of the factory shop floor at the time, and would randomly check departing staff for hidden lead with his metal detector. However, we did gain the services of Jervis Johnson and Lindsey to de la Doux Paton: both of whom were to contribute greatly to Games Workshop’s future.

Lindsey is now married to Rick Priestley of course.

RoC80s: Your miniature collection has become rightfully rather famous in recent years, did you spend much time with the 'Eavy Metal team during your days as Managing Director?

BA: I’m afraid that I didn’t have a great deal of contact with the figure painters.  I probably didn’t go into their room more than ten times.  Phil Lewis took the figure painting (and the photography) in hand and worked with Alan Merret to make sure that all went well.

Alan was the man who held things together at the studio.

RoC80s: The development of plastic miniatures was something you worked long and hard on in the 1980s. How did you go about moving from a metal casting process to a plastic one?

BA: I worked with John Thornthwaite on the plastics.  John had been in charge of plastics at Matchbox.  At the end of Matchbox, John was left single-handedly holding the company together.  This was the time of the Falklands War.  Matchbox had moulds for the very same jump jet, helicopter and warship that were getting a terrific amount of publicity in the news media .  John had his remaining staff working round the clock and they had filled the Matchbox loading bay with enough kits to keep the company rolling; however it turned out that the business had been somehow split into a number of separate independent parts.  Apparently the part that should have funded the shipping had run out of money and john’s kits never left the loading bay!

I think that Matchboxes metal cars survived in a new guise and provided a livelihood for ex Matchbox staff, but the plastic kits end went down. I ran into John at a Military modelling event.  He had started making his own military vehicle kits.  He came to work with us.

This was when we were still in Newark.  I was only running Citadel then. Steve and Ian were keen to do a game using our new plastic capability that could be sold into the toy market.  I think that they designed the game themselves, it was a dungeon adventure in about 60mm scale.  Mostly they were sold in the Games Workshop shops and Beatties.

This was our first experience with plastics.


RoC80s: The iconic plastic kit of the time were the RTB01 Plastic Space Marines. Were these an easy process to develop for plastics or something that took time to perfect?

BA: When John delivered the first of those plastic models I was very disappointed.  The models had visible blocks of unnecessary plastic all over the place.  John explained that they were there so that the models would come out of the metal mould without taking damage from undercuts.

We had a fairly heated debate.

I felt that if our metal models could be made to roll their way out of our quite hard rubber moulds without greatly imparing the sculpt, then these quite hard plastic models should be equally capable of rolling out of his metal moulds without resort to ugly filling. Some of you will probably remember the small sprues: Drastic Plastic etc. that we produced in our first experiments with plastic undercuts while sorting matters out.

I think that we produced our first plastic shields and perhaps bases while we were still in Newark. Our first proper plastics were that first box of Space Marines though.  My direct involvement with the detail of plastics manufacture ended with their arrival.  I think that we were all completely astonished that we had pulled it off.  We had not put the studio together that long before and we all felt that we had put something special together with the miniatures, the content of the Rogue Trader book and that remarkable edition of White Dwarf.

I expect that the project (perhaps alongside Space Hulk) was a highlight of a good number of the participants working lives.

Also, it brought us mighty Wayne England: who on reading the Rogue Trader White Dwarf, gave up his career in the packaging design industry to come and work with us.

Where Bob Naismith and Alan Merrett came in was in pulling the processes together. We would sculpt a miniature just as we normally would.  Then we would photograph it and blow it up in size (I think it might have been to eight times its size) and that image was used as a template for making a huge clay model.  We would then make a resin negative of the huge clay model, which would go away to one of John’s former colleagues from Matchbox, who would use a pantograph in the resin negative block, to guide him while he chiselled away a cavity in a steel block that would then be actually be used to manufacture the plastic version.

I think that another one of John’s colleagues from Matchbox ended up with their plastic machinery.  It was him who would actually inject the plastic and produce our finished sprues.

It was a long process making the big clay models.  The clay/wax mix (the same as used for making full size models of new motor cars) was hard and uncooperative.  Available sculptors and other volunteers would sit around a big table passing the wax models round.  Alan and Bob would participate. However, Alan’s role was within the studio: where he had many other responsibilities with regard to sculptors, miniatures, publications and artwork.  Bob’s responsibilities were outside the studio to a significant amount and involved dealing with the overall communication, pantography and the steel moulds.

RoC80s: We have been discussing the famous plastics that helped launch Rogue Trader: Warhammer 40,000 but what of the game itself? Did you have a feeling it would be the success it grew to be during the game's development?

We all had high expectations of Rogue Trader, we already felt that it would always be with us. We were keen to push on.

We were confident that Space hulk would also do well: both because of its close association with 40K and because we had confidence in our overall plans for the game, I saw it as a very important complimentary product .  Richard Halliwell was in the country at the time [back from Africa I think]  and we brought him in to do the heavy lifting.  We already knew that we wanted the corridor cards and the alien monsters.  Hal got stuck right in and did a very fine job .  We were also very fortunate to have Wayne England to do the floorplans and the artwork. Wayne was taken by the concept and the game system. Soon he was producing 'Large Numbers Of' extra corridors and organizing the studio staff to play lunchtime games every day of the week. The extra corridors ended up in White Dwarf.

By then we could tell that Games Workshop was going to continue to move steadily forward and we felt that we were in a position to do almost anything we liked (within the limits of hobby game industry of course). The weight of our attention was falling on 40K, but I don't think that that was greatly at the expense of Fantasy Battle or our other projects. 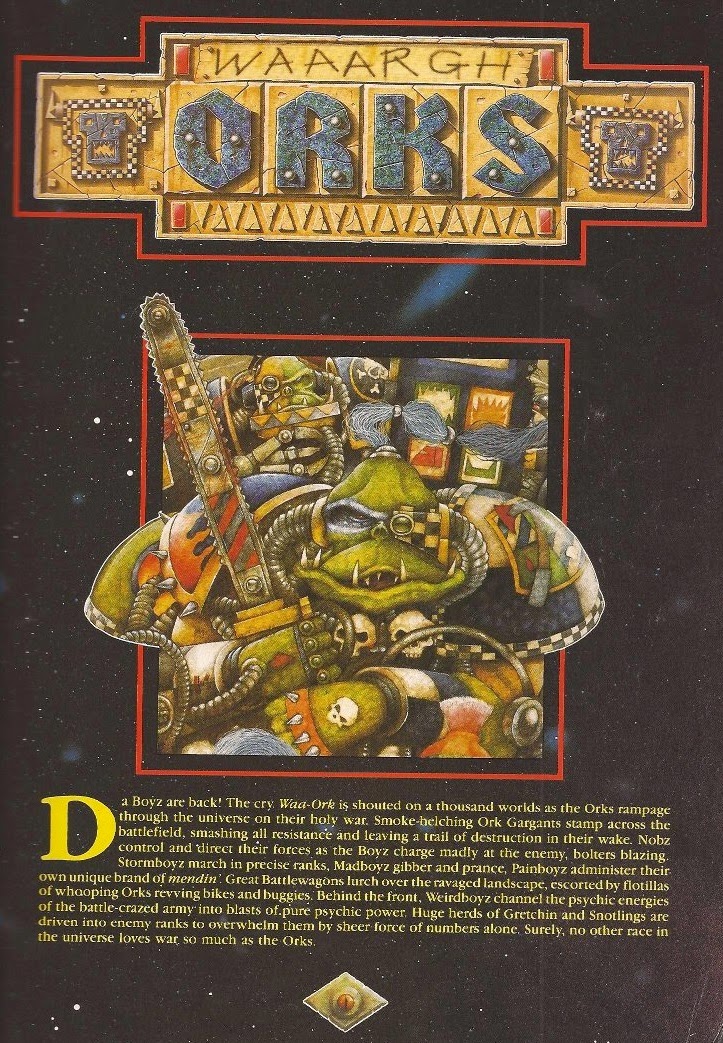 Roc80s: One of the last things you worked on before leaving were some of the ork books and these are very fondly remembered by fans. Would there have been more if you stayed on?

BA: I thought that the Ork books were a marvellous creation.  If I had stuck around we would have produced similar books for all the 40K and Warhammer races (not necessarily with that many volumes though) and kept them 'Permanently in Print as Paperbacks'. The Warhammer world could have developed into a splendidly textured alternative reality for gamers to explore.  All they would have to do would be to pick up a book and walk right in.
Posted by Orlygg at 21:19