When you think of the great artists who produced work during the Golden Age of Games Workshop, you would probably name John Blanche or Ian Miller without much thought. Tony Ackland and Tony Hough probably wouldn't be too far behind either, nor would John Sibbick. But one name that is probably not going to be vibrating around your brain like a bloodthirster with a hangover, is Stephen Tappin.

I have long been a fan of his work, largely due to the sheer number of bizarre and horrifying images he contributed to The Lost and the Damned but up until recently, it wasn't really aware of his 'name', if you know what I mean. He was just 'the bloke who drew that picture' to me, which on reflection the other day is a bit of an oversight on my part. Intrigued by what I discovered when I dug a little deeper I found myself typing his details into Google to see if any further gems would surface. I mean, was he still working? Or had he disappeared from the ether like some other names we could mention in Warhammer's past? 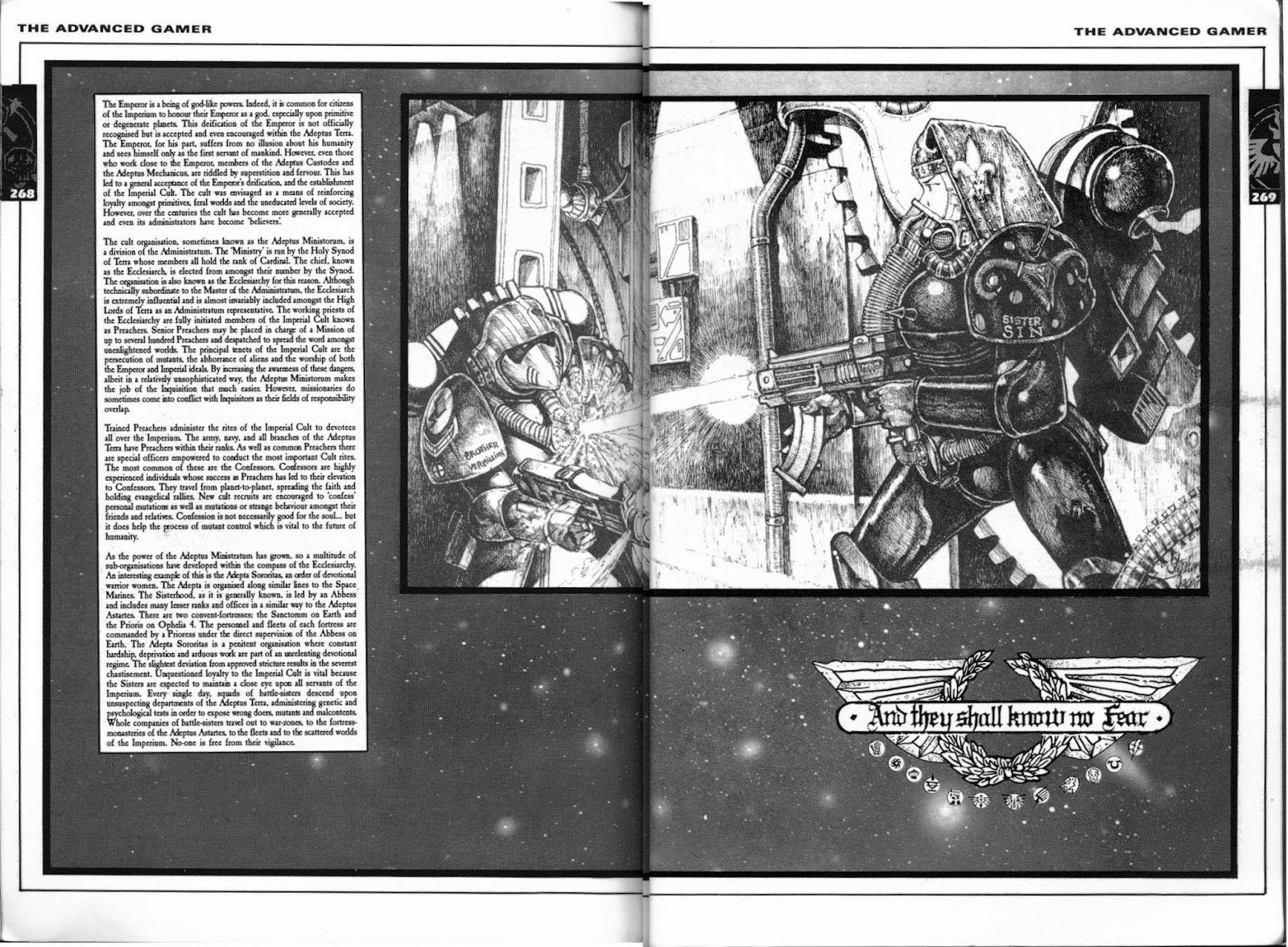 The first page of my search through up a bit of a shocker. Sister Sin! One of the most controversial images produced for Rogue Trader, and one that the fan-boys still argue about to this day. Is she a female Space Marine in power armour (two models of which were produced in the 1980s) or any early Adeptus Sororita, or something else entirely? I have nothing further to add to that discussion as I know from research that many of the artists producing artwork for Rogue Trader had no idea whatsoever what many of the model range would look like. Tony Hough told me that when he came to draw a Space Marine, the design boys still hadn't quite decided on what the legs would look like - so he just drew what he thought was appropriate!

I would imagine that something similar lies behind Sister Sin, and though I was aware of the famous image, I had no idea that Stephen Tappin was the artist behind it. 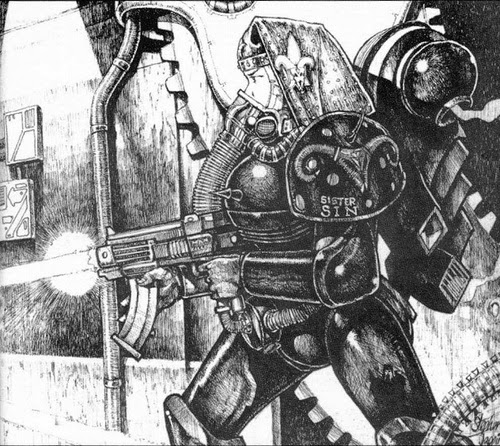 Now I mentioned this to someone online recently and they really did not agree with me at all, certain that is was Martin Mckenna who created the artwork. I started to doubt myself actually, not that I said so, as just because it says somewhere online that this piece of work is by a particular artist, doesn't make it true. Thankfully, a careful study of the image revealed to Stephen's signature on the bottom right of the picture.

Can you see it too?

Now as far as I can tell this piece of work was produced in 1987, when Stephen Tappin was working as a Freelance Illustrator for the Maggie Munday Agency (which still seems to exist if you follow the link)  while completing his training at the Canterbury College of Art and Design. He graduated from there in 1990 and seems to have continued with his freelancing (producing a great deal of work for GW in the process) for a couple of years before joining the company properly in 1992. 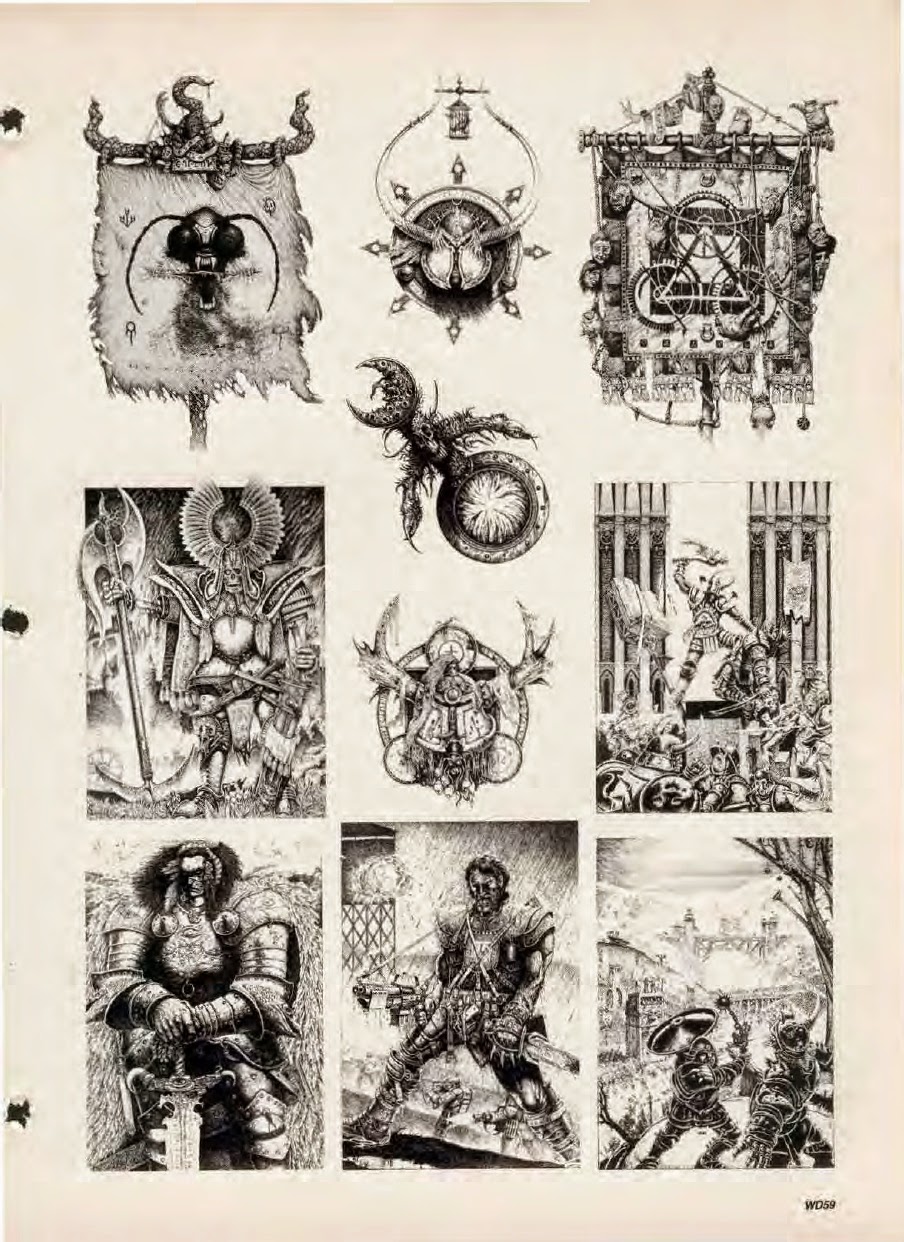 Stephen remained there for the next couple of years, leaving in 1994. As I said, in the years between graduating and joining GW proper, he produced a huge amount of freelance work for the company, most notably for The Lost and the Damned but he also contributed materials to Warhammer Siege and other projects of that period. And some of that work is presented here, taken from one of the artists specials that White Dwarf used to occasionally publish: Illuminations.

Looking at the scan above, you will probably recognise the two banners at he top of the page from actual painted examples in Bryan Ansell's collection. One is a Nurgle design and the other a Slaaneshi job. But what came first, eh? The illustrations we see here or the painted examples stuck to the poles of standard bearers? My money would be on the illustrations, but you never can tell, can you? 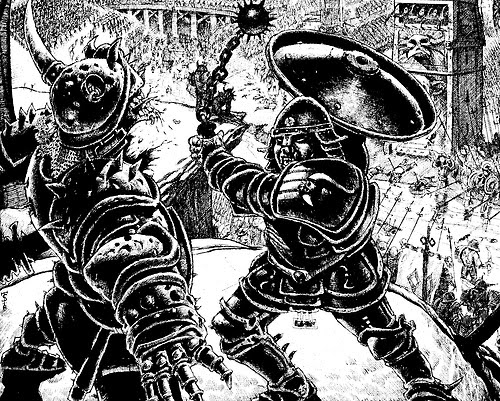 One of my favourites from the spread of images above is this one. It depicts two chaotic looking warriors, in the day when these things didn't actually have to be closely aligned, ending a combat somewhere, no doubt, in the realm of chaos. It has shades of the famous Harry the Hammer picture that was used on the first edition of Warhammer and was recently found in a toilet in Stoke Hall.

I really like this style of illustration. One that seems to have been a popular style in the Design Studio in the 1980s and early 90s. The scratchy almost woodcut-like qualities of many of the pieces of art endow them with an ancient and archaic vibe which results in the background to the game seeming much older and deeper than it actually is. 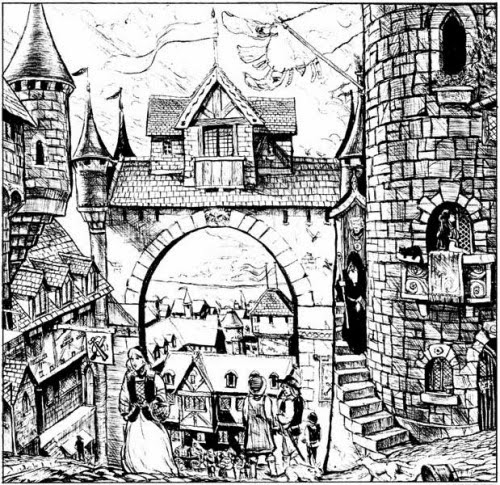 Here is one of my favourite ever Warhammer illustrations and another one I didn't know was by Stephen Tappin. There is so much promise in this image, the promise of adventure and the infinite possibilities that the Warhammer world can suggest the gamer. It is also understated - which is how I imagine the Empire. None of the grim, spike strewn morbidity of later interpretations, but a colourful cod-fantasy world totally unaware of the awful horrors that lurk in the darkness to destroy them. Which makes the horror all the more horrific!

The beauty of this is in the detail. The cat on the ledge, the windowbox, the wizard type strolling down the steps, the buildings in the distance and the drying washing (tiny fantasy pants included) blowing in the wind. That gateway suggests a thousand different adventures and stirs the imagination in the way that CAD designed multipart kits cannot. 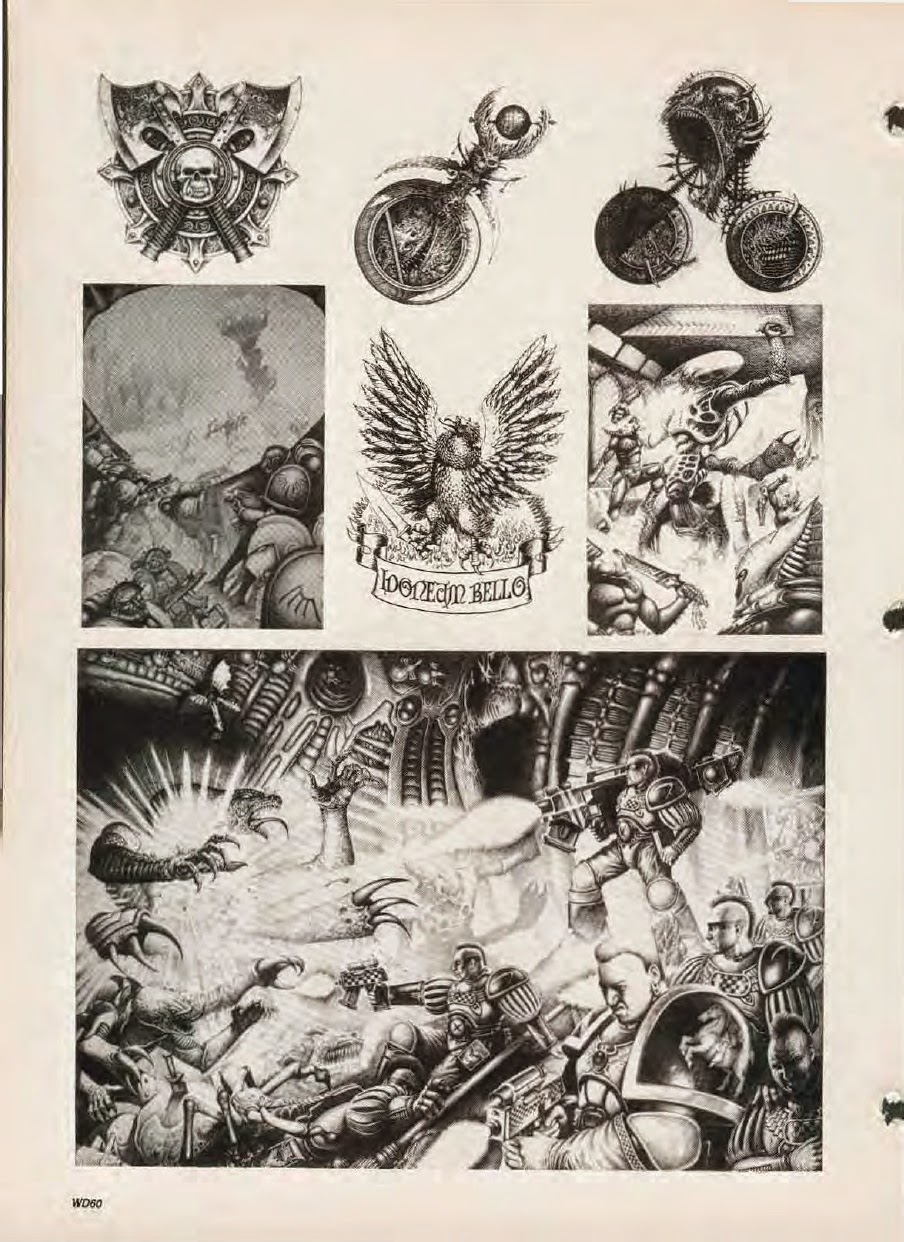 Looking at these illustrations leads me towards Advanced Space Crusade, a game I had in the late 80s and literally played to death. Like Space Crusade, its not a game you see discussed much these days but I am sure its time will come again. There is something rather unsettling about those early tyranid designs isn't there. Always loved the boneswords!

But what of Stephen Tappin after he left GW in 1994? Well, thanks to the internet it was a simple matter of using the search engine once more to uncover a little bit more of the story. If you are a British comics fan you will probably know the answer already - 2000AD! He did four years there in a freelance capacity, working on a range of different strips, including Judge Dredd, Slaine and the old GW favourite, Rogue Trooper! Then in 1998, Stephen switched to working in the field of matte design for film/advertising/musical promotion and remained there until the present day, working for a variety of different companies until the summer of last year when he joined Industrial Light and Magic as a concept artist.

Perhaps to work on the new Star Wars films? 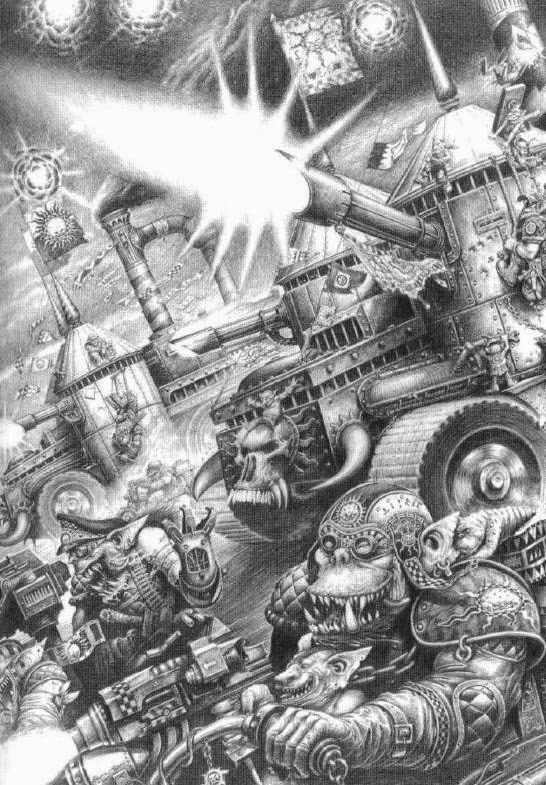 He certainly has the experience for such a job, having worked on recent 'blockbusters' like The Edge of Tomorrow and the rather silly title, X-Men: Days of Future Past among others. What really made me smile though was this image, lifted from his personal website, and one that will be very well known to British readers of this blog. 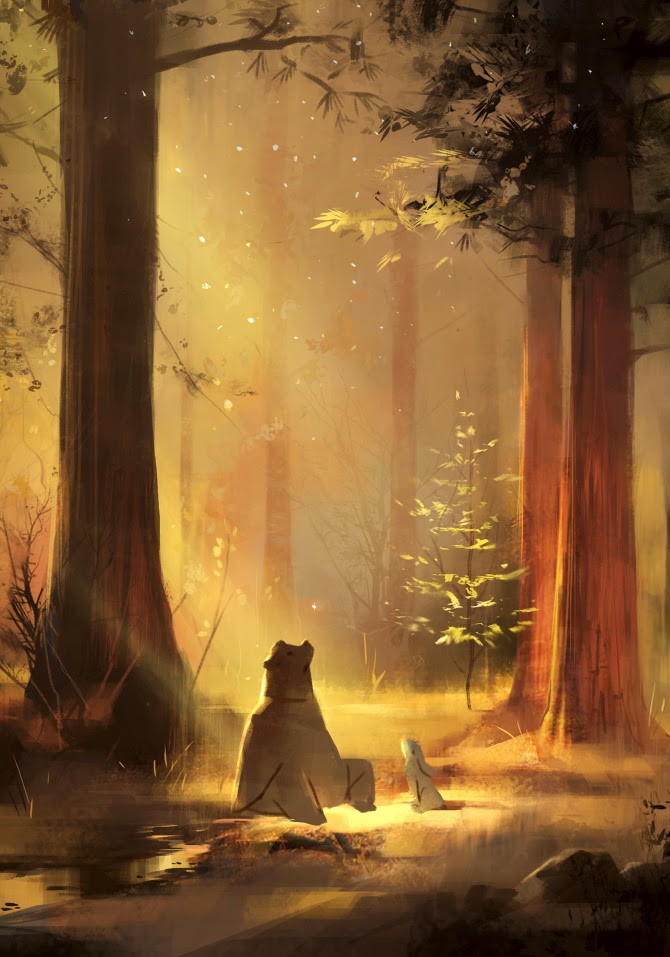 Stephen Tappin, the man behind Sister Sin and so many other classic Games Workshop art was behind that iconic piece of advertising for John Lewis two Christmases ago! Can anyone else sense the hand of Tzeentch at play?