A Warhammer Bestiary: Were 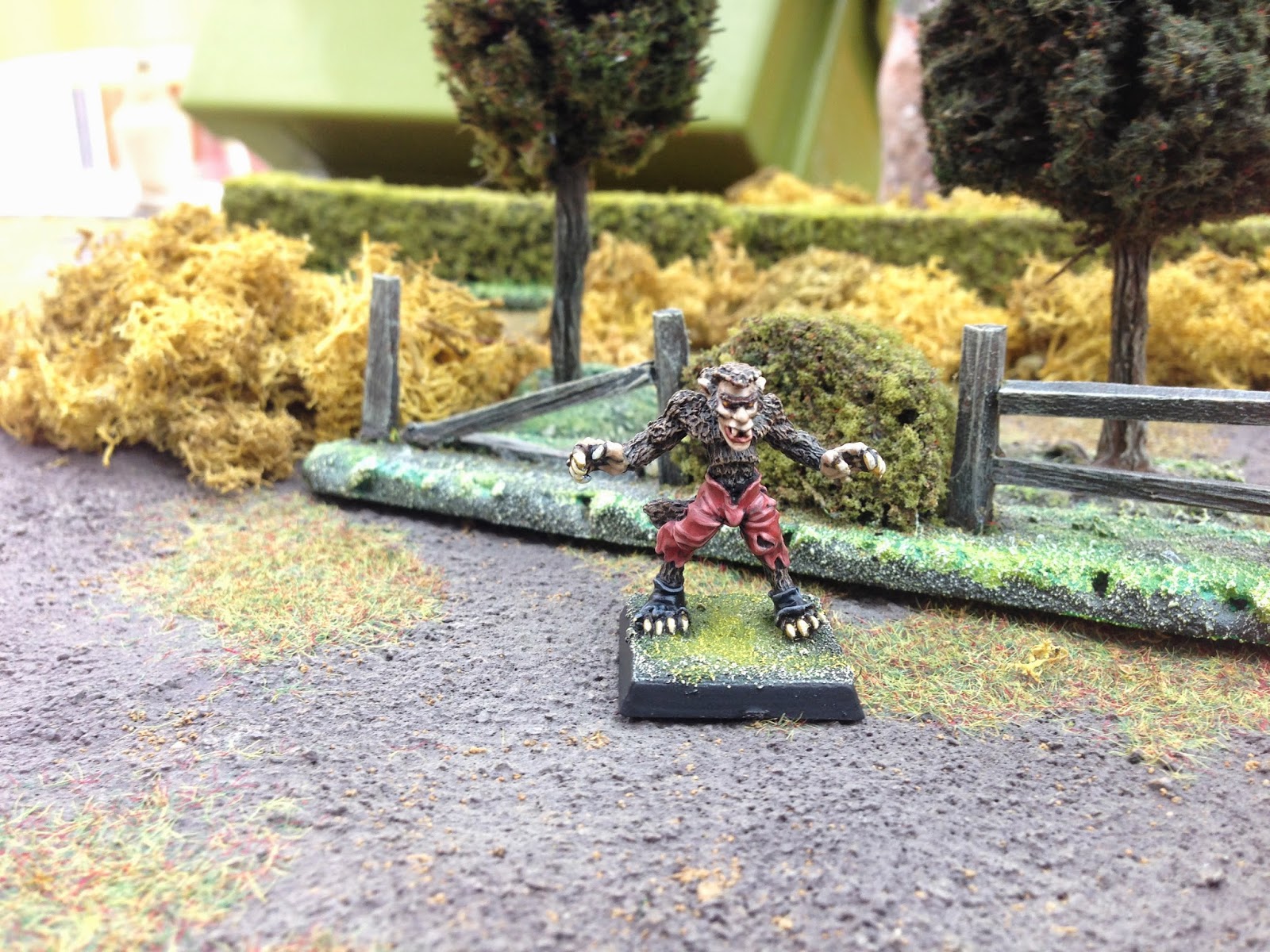 Here's my latest painted figure. A Night Horrors werewolf. Now, I am sure that many of you are familiar with the Night Horrors range as it is really rather collectible, not to mention home to one or two rather pricey models. I have heard it said from others that this particular range is rather difficult to complete but I couldn't say for sure if this were true as I have never had any real problems getting hold of any of the models in the collection.

Werewolves are rather rare in the Citadel Miniatures world. I cannot actually think of many suitable models for representing them. In fact, I more modern times they have been removed altogether from the background, of at least it was so when I was still reading the fluff. With the speed and reversals of background change in the last ten years they may well have an entire army book out by now!

Unusually for a living creature, the werewolf has become linked to undead armies. I have always found this rather strange as, despite the bestial urges, weres are ultimately alive. During the 1980s, the alignment of weres in Warhammer was rather ambiguous. The Bestiary remarks that they are neutral beings, and just as likely to be kind as they are callous. The choice of their behavior is up to the GM or players, though of course the more beast the were becomes the more likely he is to devolve into a giant wolf, with all the animalistic urges such a creature must act upon.

I like the way the rules suggest you use the were. Transformations to wolf man need to be forced by the characters will and a 6 needs to be rolled in order for the change to take place. Being in close proximity to violence may well change this to a 5+, while hand to hand combat will allow a player to use a 4+ to ensure change into a wolf man. The rules are really rather interesting and I really do recommend having a read of them if you have a copy of WFB3 to hand.

Of course, then there is the threat of transforming into the unpredictable giant wolf. A creature likely to attack friend and foe!

All in all, the weres are a rather complex unit which have a strong bond with the Norse, though are not found exclusively there. The background suggests that many woodcutters and forest men are secretly weres, living peacefully in the forests of the Empire and ensuring that their changes harm nothing but the wild animals of the woods.

This was a fairly simple paint job really. Ink washes and drybrushing were the orders of the day when it came to completing the wolf fur. I found this took quite a bit of work to get the right tone but achieved it by switching from adding white for the highlight to adding Bleached Bone. The trousers were done using my normal method, as were the torn apart shoes. The eyes were dotted yellow and the lips were painted. I have found that when doing mouths that mixing in the skin tone with red or purple produces a better result that just using paint straight from the pot.