The Daemon Prince and the Woodcutter Scenario Report: Part 1

Welcome to the first of my Oldhammer Scenarios that I hope to share with you in the coming months. If you are coming to this report fresh, you may want to have a quick scan through the background to the scenario here, though doing so is not necessary. In fact, you may well want to stay on this page to avoid the spoilers that that article will inevitably bestow upon you.

A clearing in the forest, about half a day's travel from the Imperial town of Drakberz. A shadowy group of figures secret themselves alongside a thick patch of brambles and observe the serene landscape before them. A single cottage, with a crumbling stone wall to the rear, stands among hundreds of tree stumps. Thick areas of bramble growth spot the land here and there, competing for light with the odd tree. A dusty track, the Old Forest Road, runs past the building and branches off to the south.

A female elf, obviously the leader of this expedition withdraws a crumbled letter from her belt. Cracking open the starched pages she re-reads her instructions...

News of our victory at Darkspume will have no doubt reached you by now. The time to move the coven grows near and we must rejoice in that fact. However, there is a danger of complacency if we fail to act accordingly. We are now free to move westwards through the depths of the forest as our enemies are now scattered, but time is short. They will rally in the days to come, no doubt gaining strength as quickly as we bled it from them. So M has ordered that the perfect sacrifice should be moved by the end of this moon.

Your task is to clear the path through the forest to the east of us. You will be familiar with the Old Forest Road from our earliest times together. The place is much changed now and is bitterly contested. Followers of the Bloody One and the Father of Flies have fought each other for many years for possessions of the crags, glades and clearings. Our journey will be the swifter if these rivals are distracted.

You are to find the shrine of Gloth'as'skar, an ancient statue dedicated to our lord. The shrine consists of a craven image, gouged from stone, and is lost somewhere along the Road. Supplied with this letter is a preserved heart. This and this alone will re-activate the shrine and cast our Lord's power and influence across the land. This power, if properly directed, will further disrupt our enemies and allow our safe passage.

I have little aid to give thee apart from the knowledge that a simple woodcutter dwells near the shrine. According to our spies, he knows the lay of the land like no other and will be a good place to start in your search. It is likely that the shrine is protected by enchantment, most likely illusion, though the heart will allow what cannot be seen to be seen once again.

Additionally, I have supplied a ring for one of your followers. It contains a petty illusion spell. I am not privy to the blessings of your followers but I expect that few can past unnoticed amongst the non-believers. This ring will remedy that. Slip the band on to a finger, and all the uninitiated will see is a common peasant man. Use this tool wisely.

Find the shrine and re-activate it. Be on your guard for our enemies and the creatures of the forest.

Do not fail our master. 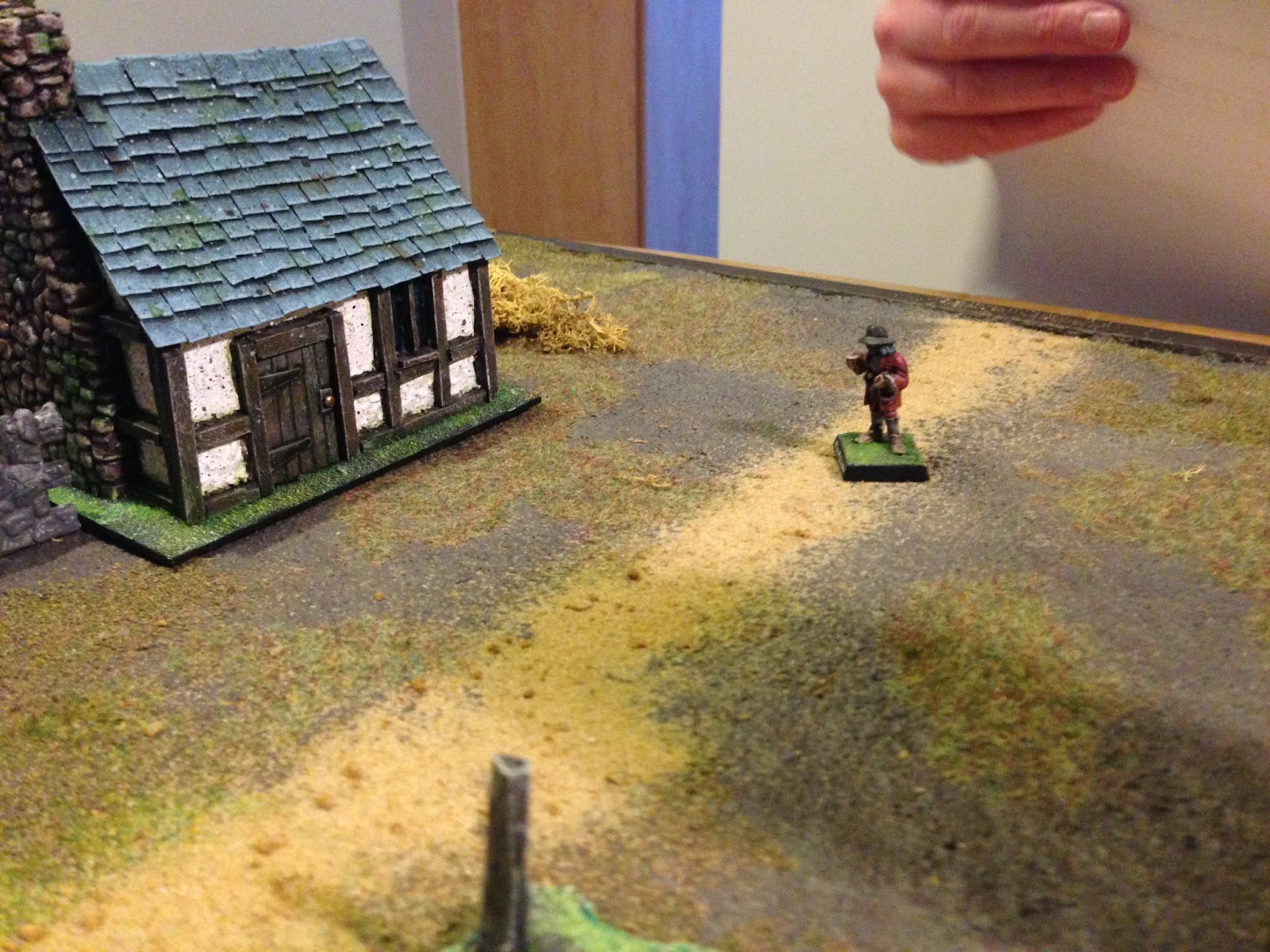 Slowly, a single figure strolls from the forest's shadows and plants their booted feet upon the dusty soil of the road. Small clouds of flies circle his head in the lazy way of insects. He stops to observe the cottage, though no immediate signs of life are spotted. Stepping off of the road, the figure makes his way around the side of the building leaving the flies to endless circuit. 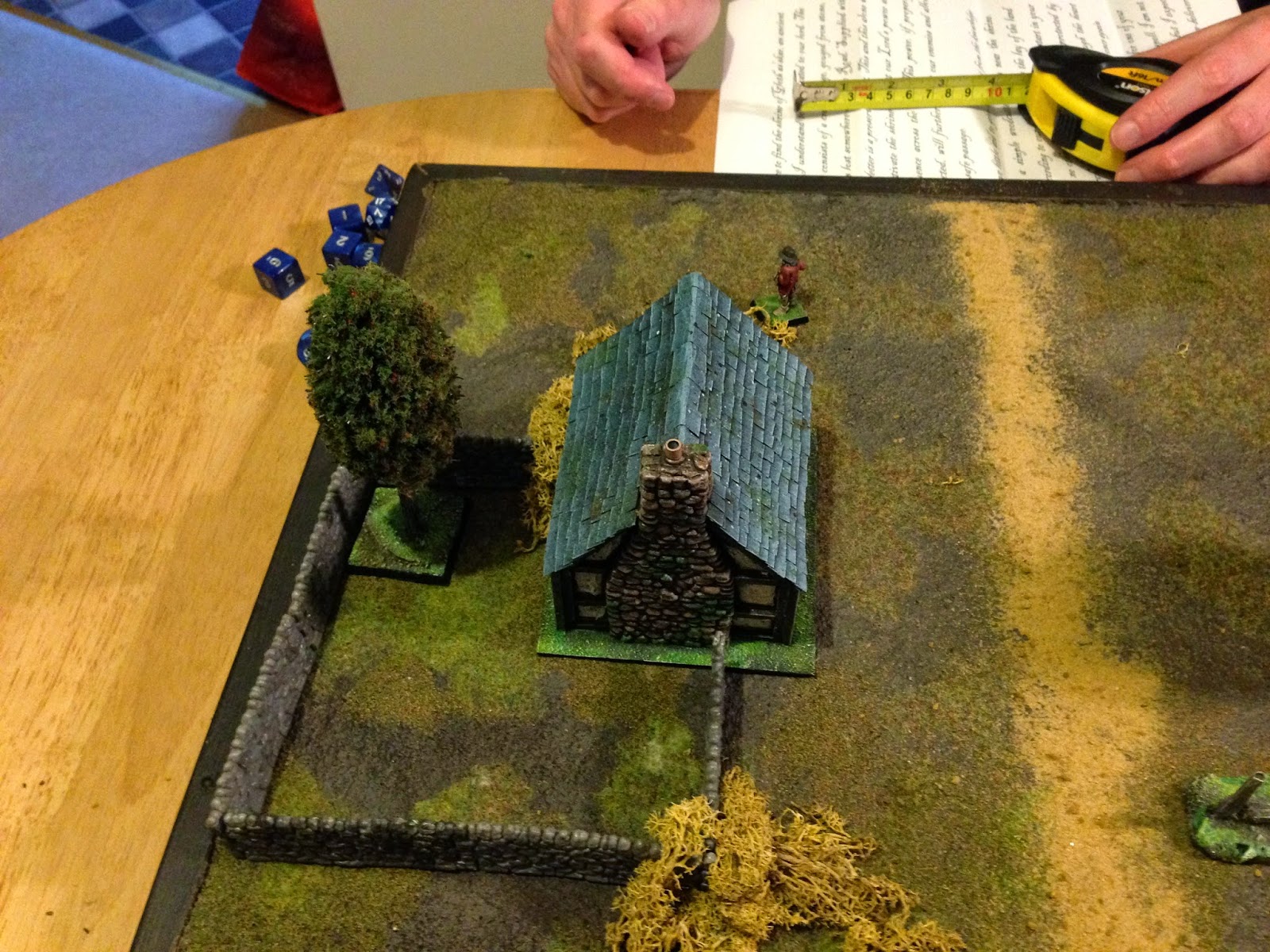 Carefully, the figure considers the cottage. There is something odd about him, though a thief he is not, for only the most foolish of their ilk would dare to be seen some openly. He pauses to sniff the air, as if trying to sense for something,while his idle fingers toy harmlessly with a unadorned silver band on a finger. The sound of someone chopping wood behind the building can now be heard. 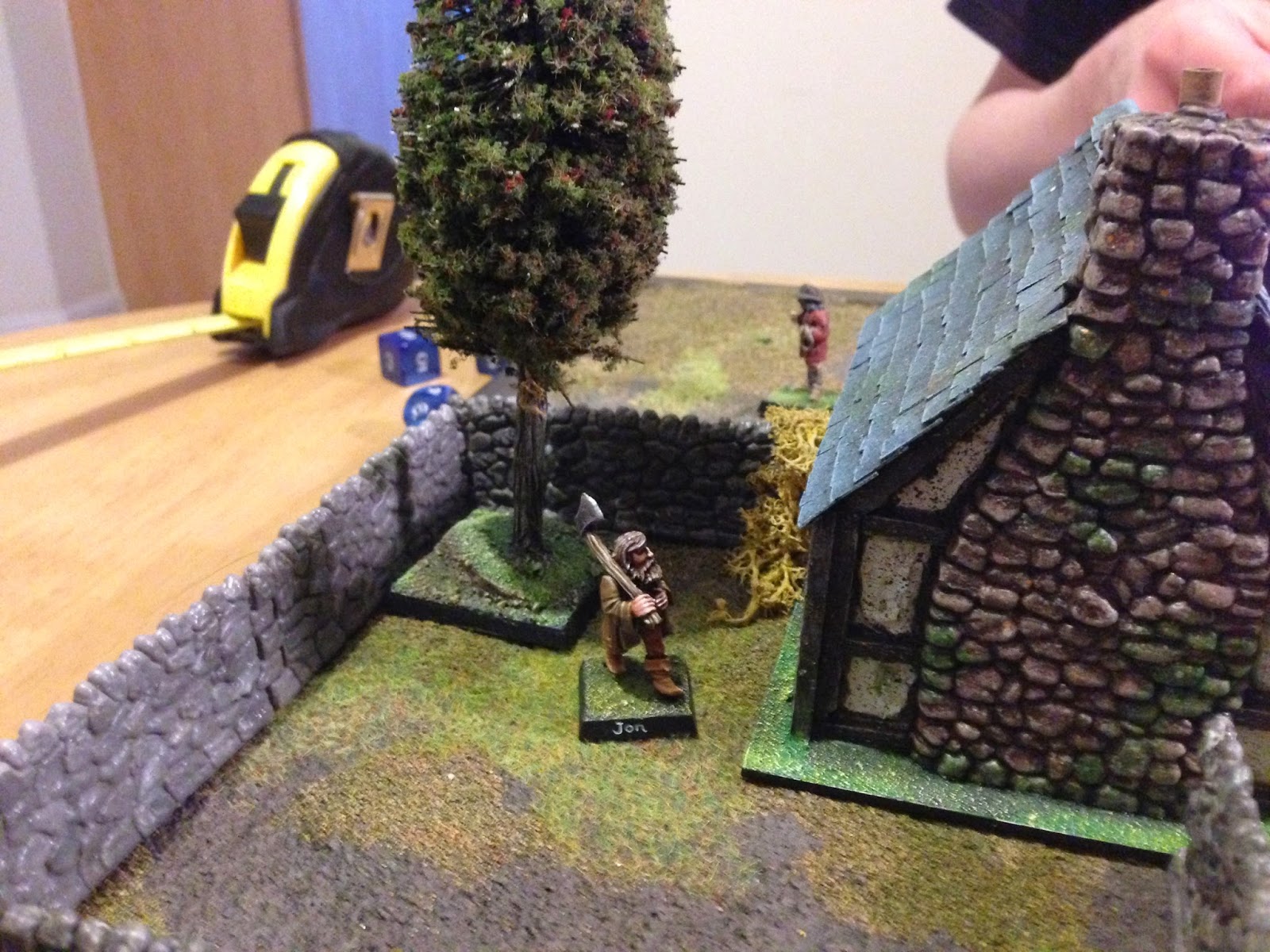 The figure advances with interest. Within moments, he has turned the corner of the building and spotting a single woodcutting chopping wood for a unseen fire. Observing the woodsman brings little information beyond his age and bearing. The woodsman is middle aged, with greying brown hair and a bristling beard. he looks up, his yellowish eyes narrowing as he notices the stranger by his garden wall. 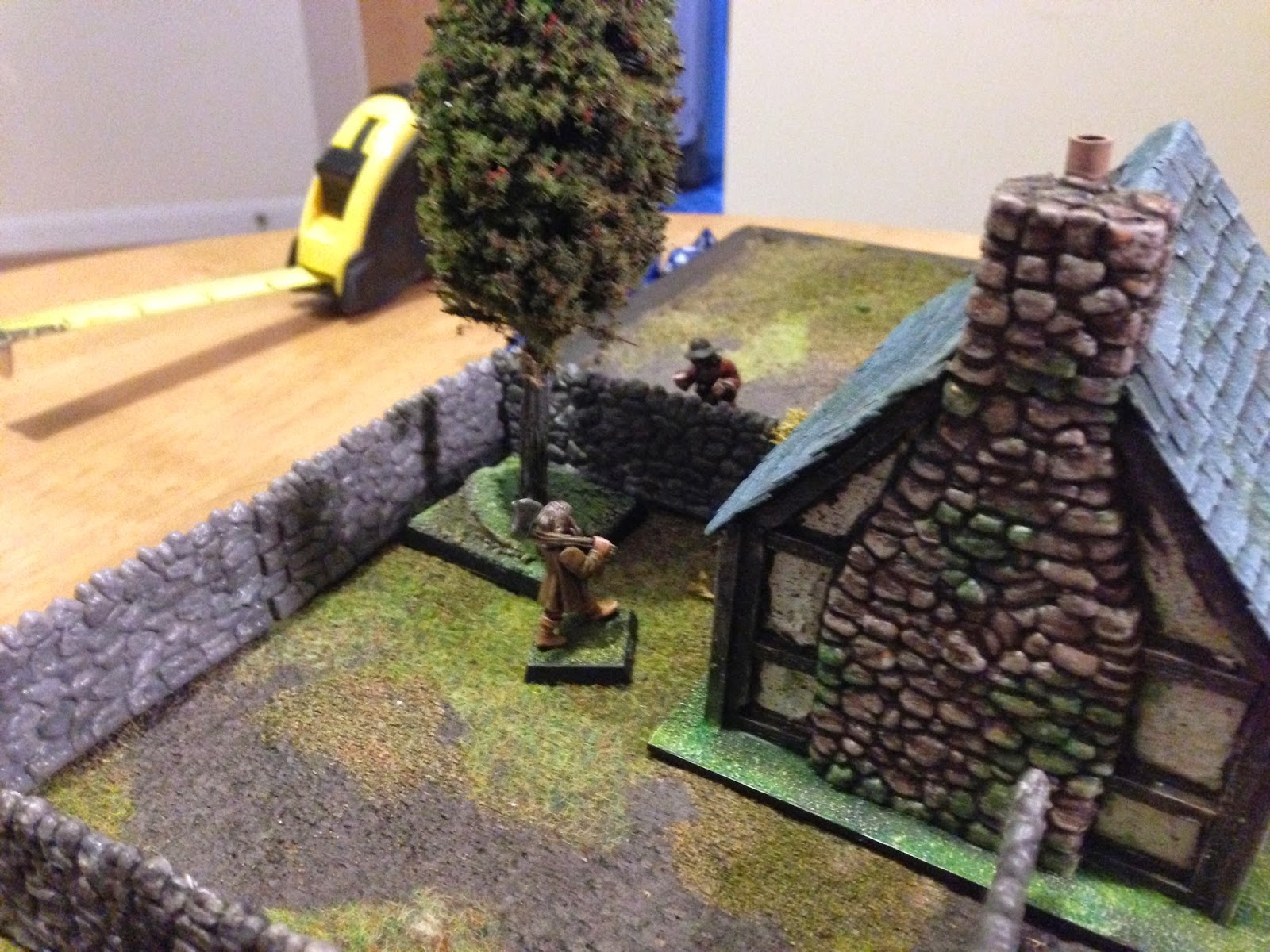 "Good afternoon," the figure states, as if in way of introduction, "you aren't aware of any shrines in the area are you?"

"Shrines?" The woodsman considers, resting a burly arm upon his axe haft. "Why yes. To the south there lies a shrine to Morr, people with us forest folk when we have needs of it. Further south sees a shrine to Shallya too. Can I ask why you ask?"

Ignoring the woodsman's pleasantries, the strange goes on. "How far would the journey be to these shrines?"

Blinking his displeasure at the rudeness of this fellow, the woodsman answers nonetheless. "Why, three or four hours for Morr and several days for Shallya!"

The stranger considers this for a moment. "Very well," he states, touching his hat in a gesture of thanks, "have a good afternoon." 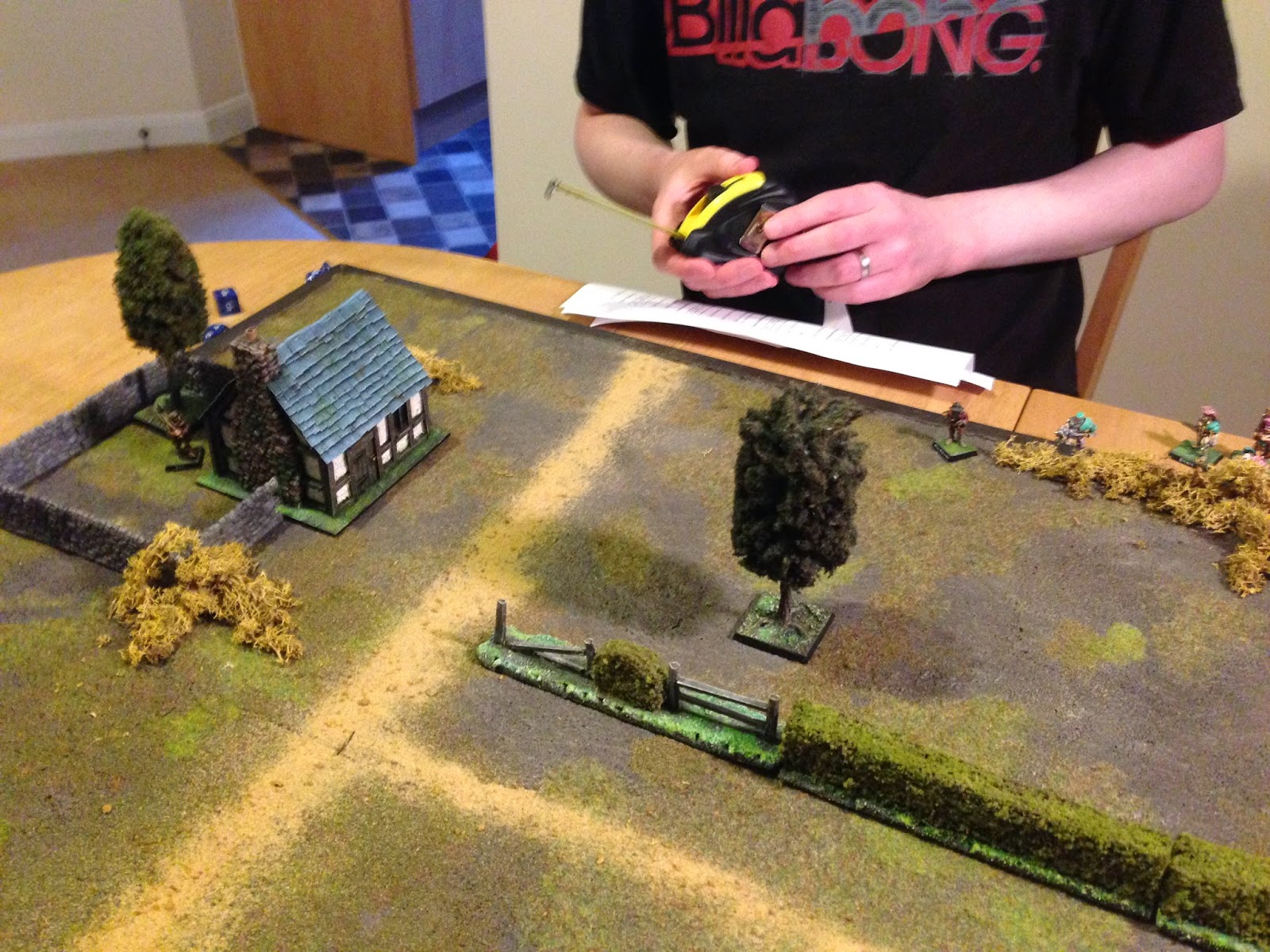 Strolling with a purpose now, the stranger sets foot once more upon the road and heads north back into the shadows of the forest. Minutes later, he re-emerges and resumes his journey along the road. If the woodman had been watching from his cottage window, he would have wondered perhaps and the change in gait with the strangers movements. Before he had moved like a scholar, with slumped shoulders and interested eyes, but now he seemed to move as a warrior, straight backed and alert. 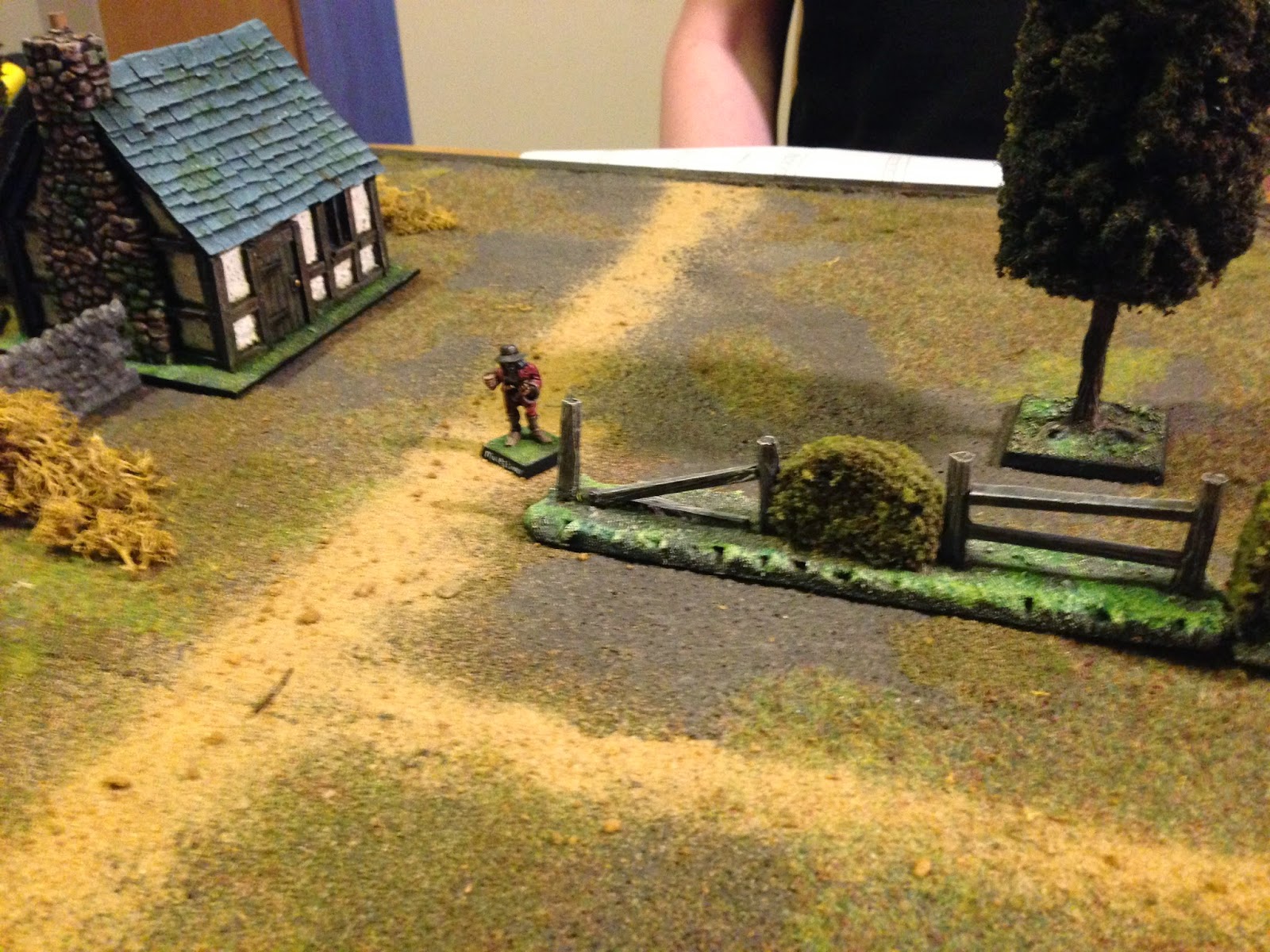 In a few strong steps, the stranger is past the cottage's frontage and begins to turn a corner past an old rotting fence. Now and again, he stops, as if looking for something amongst the bushes and trees. Confusion seems to dog his steps, almost as if he is unsure about the object he so obviously seeks. 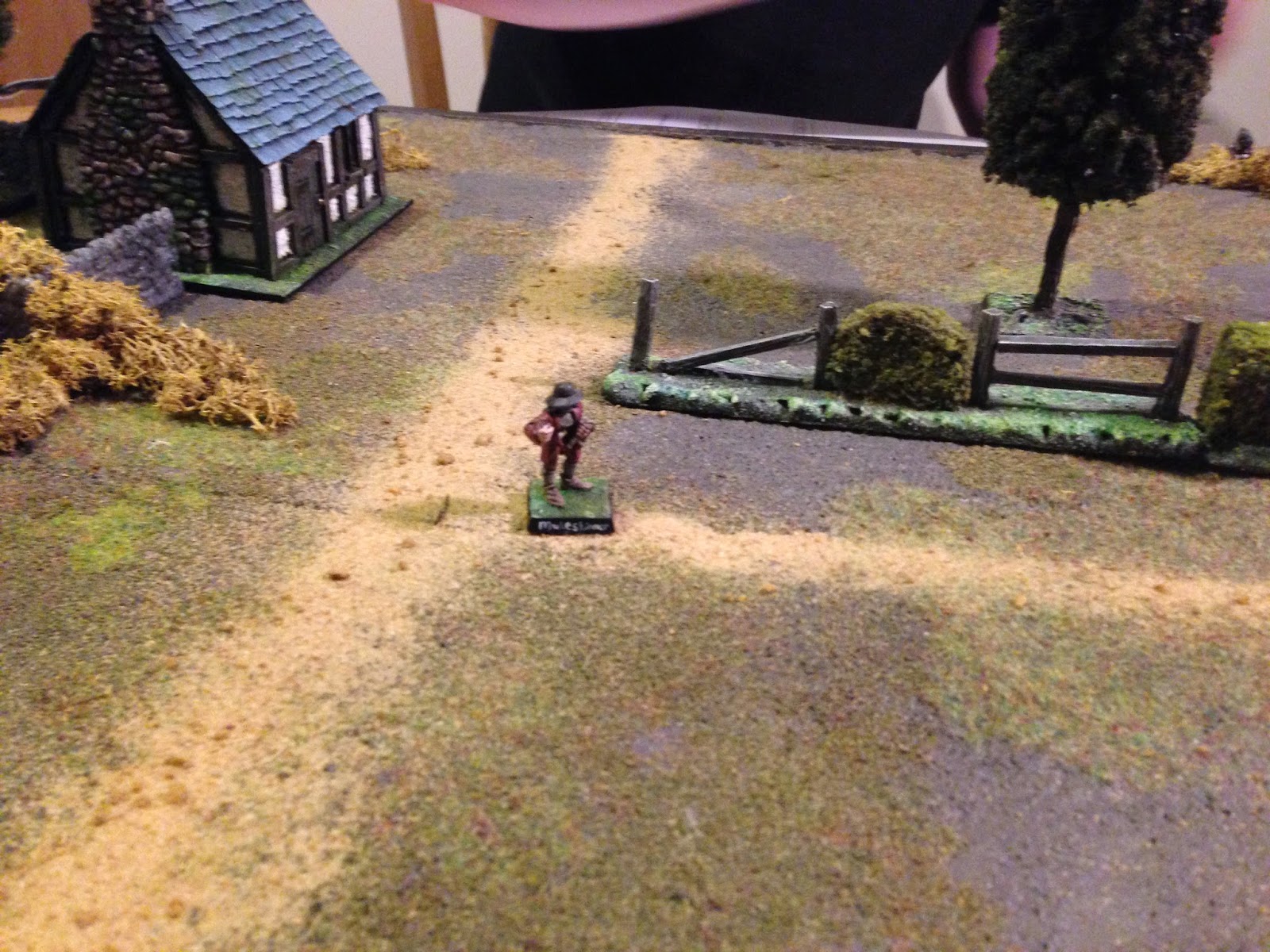 Reaching the fork in the road, the stranger opts to take the smaller path. His feet have only trudged a few steps when the strange freezes. His limbs stiffen and he becomes motionless. A sinister feeling nags at his stomach, as if he were being watched... Studied even. And not by something human! His steps faulter under this instinct, and the stranger casts his head about wildly looking for the source of this feeling.

Then, he senses a new danger. The bushes behind him seem to writhe with life. A rugged, animal stench wafts from the treeline beyond the bramble growth. The sound of leather creaking and harnesses tinkling can be heard faintly. As can the snapping snarls of what sound like... wolves! 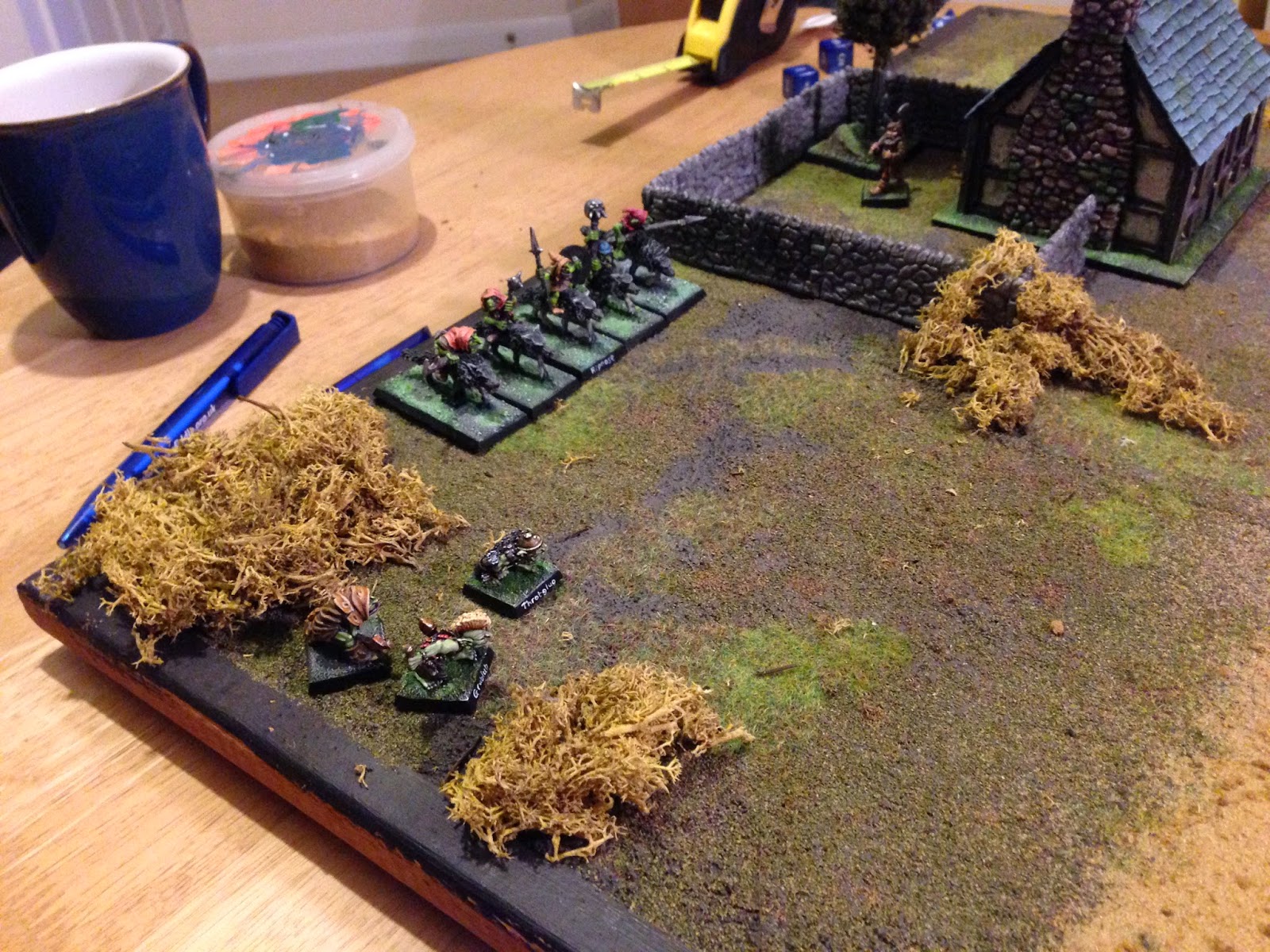 Wolfriders burst forth from the shadows of the forest. Five wicked goblinoids mounted on vicious, snarling animals. They appear armed with all the random weapons of these cruel greenskins. Emerging from the bushes nearby, sneak three goblins on foot. Their faces are just as twisted and nasty as their kin on the back of the wolfs.

The stranger sees steam rising from the mouths of the wolves. Though, rather oddly, the goblins don't seem to have noticed him yet. Making a sprint for the hedgerow, the figure starts to make himself scarce.

As if on cue, each goblin produces a grimy, glass vial from somewhere beneath their clothing and knock the contents back. Their eyes seem to bulge and their jaws constrict with the taste but a new determination begins to glow in their eyes. A determination that seems out of place on the faces of these cowardly creatures. Shadows spread across the road to the north as a warband emerges from the undergrowth. pinks, pastel greens and purples clothe their bodies and two, twisted beastmen guard their flanks. These are obviously followers of a forbidden god! Sadly, the forests are full of them. If an observer had keen eyes, he may very well have made out several other figures in similar hues sneaking among the trees. Obviously, there is more to this warband that are currently stepping forth upon the dust of the Old Forest Road.

Meanwhile, the stranger struggles to cross the hedgerow and get out of the line of sight of the goblins. Despite the goblinoids being some close by, something stops the figure from his panicked scrambles. Something that encourages his to slowly turn and look behind him! 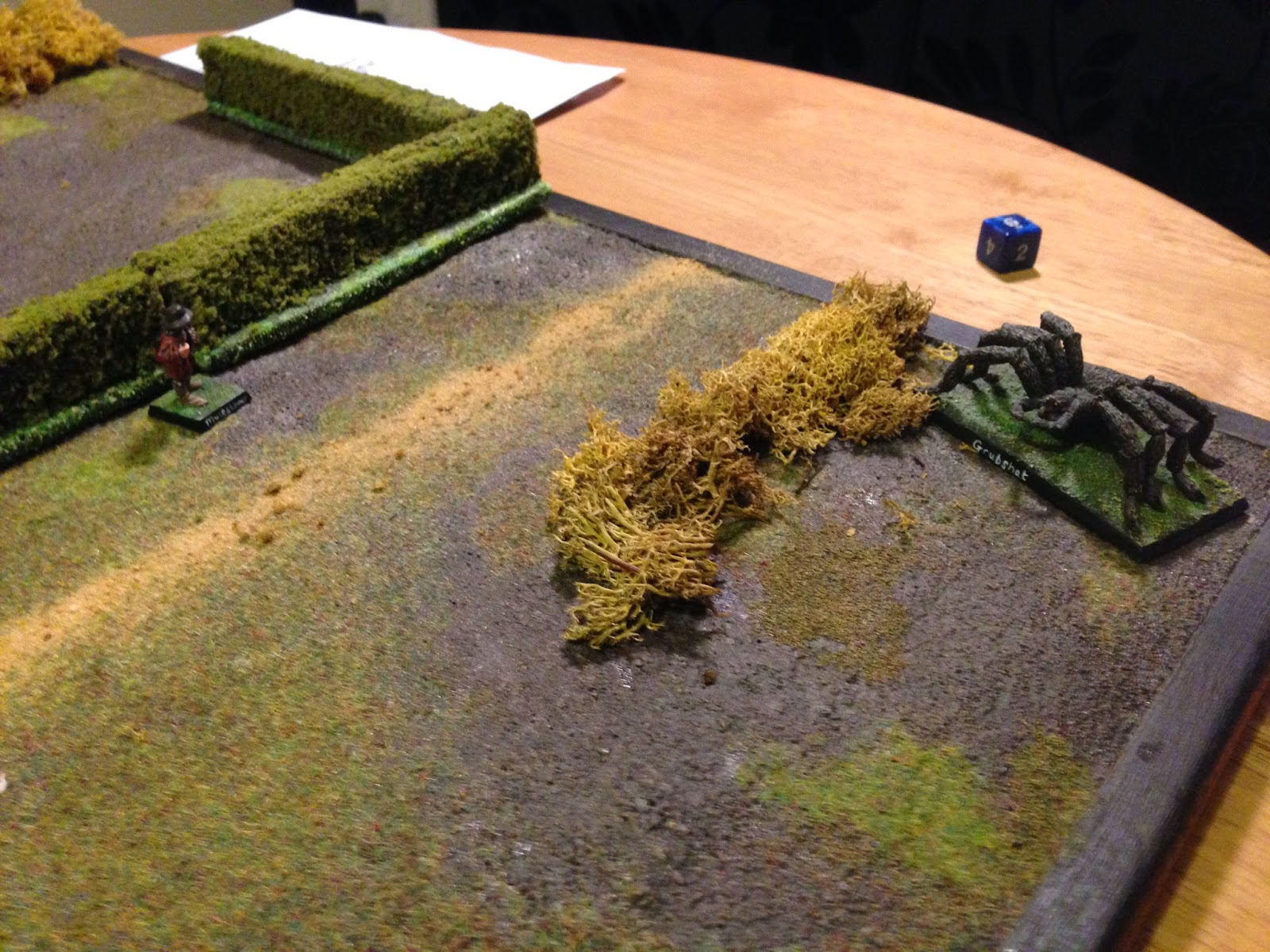 A giant spider! Dumbfounded, the stranger cannot help but watch the enormous creature crawl from its hole and begin to flex its mandibles in the afternoon's sunlight. Is the thing hungry? Terrified, the stranger continues his made scramblings to clear the hedgerow. 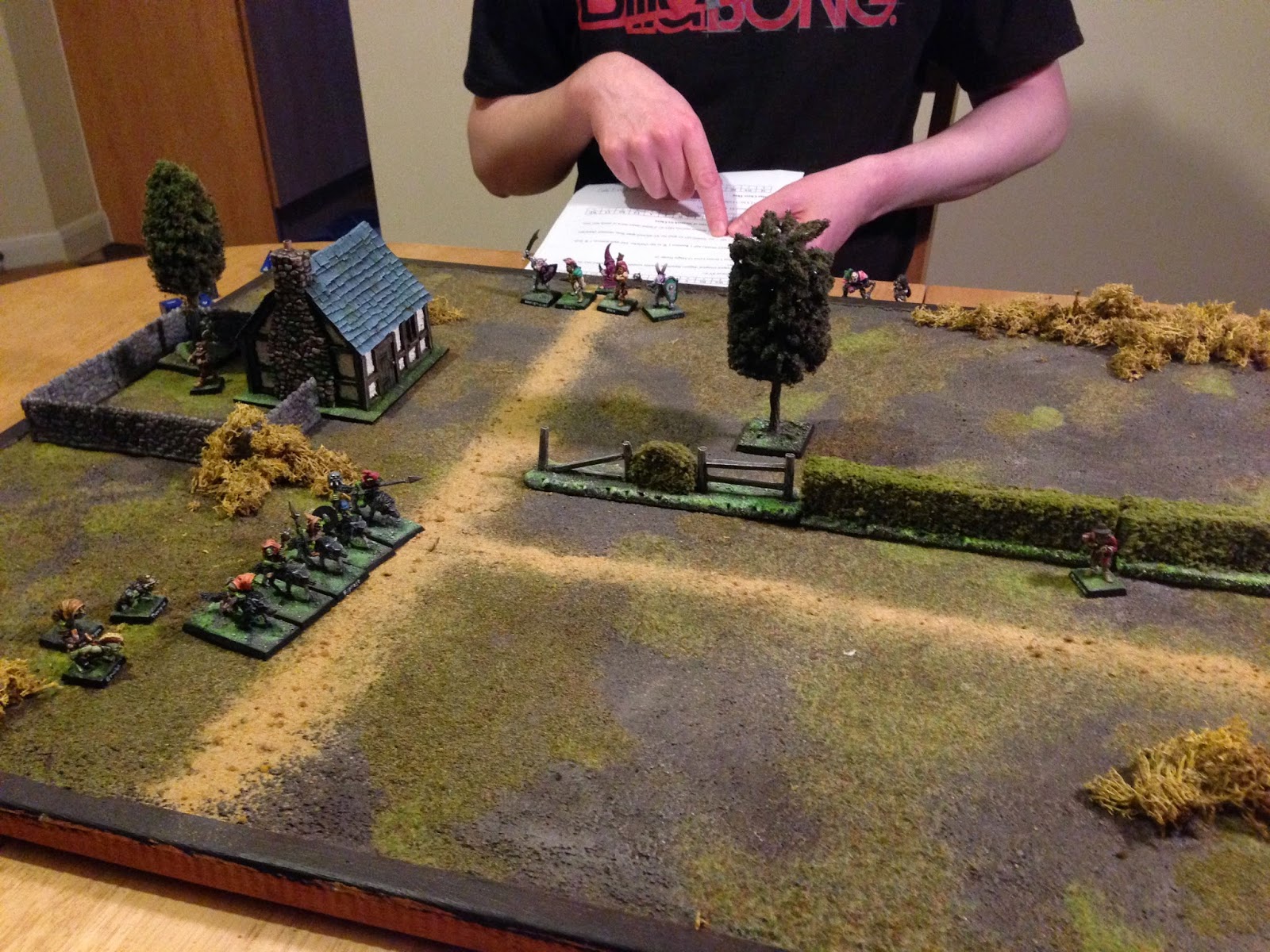 Spotting the arachnid, the goblin leader let's loose a warcry! "Snotz! Snotz! Snotz! Before launching his animal forwards, promptly followed by his companions. With an insane glee smirked across their faces, the wolfriders begin their charge towards the repulsive creature. Their remaining kin sneak forwards towards the crumbling stone walls of the woodcutter's garden.

Evil flickers on their eyes.

To the north, the chaos warband stop dead in their tracks. This is not what they expected. With practiced grace, their draw their weapons and drawl themselves together into a closer formation....

END OF PART ONE. PART TWO CAN BE FOUND HERE.
Posted by Orlygg at 04:42