The Daemon Prince and the Woodcutter Scenario Report: Part 3 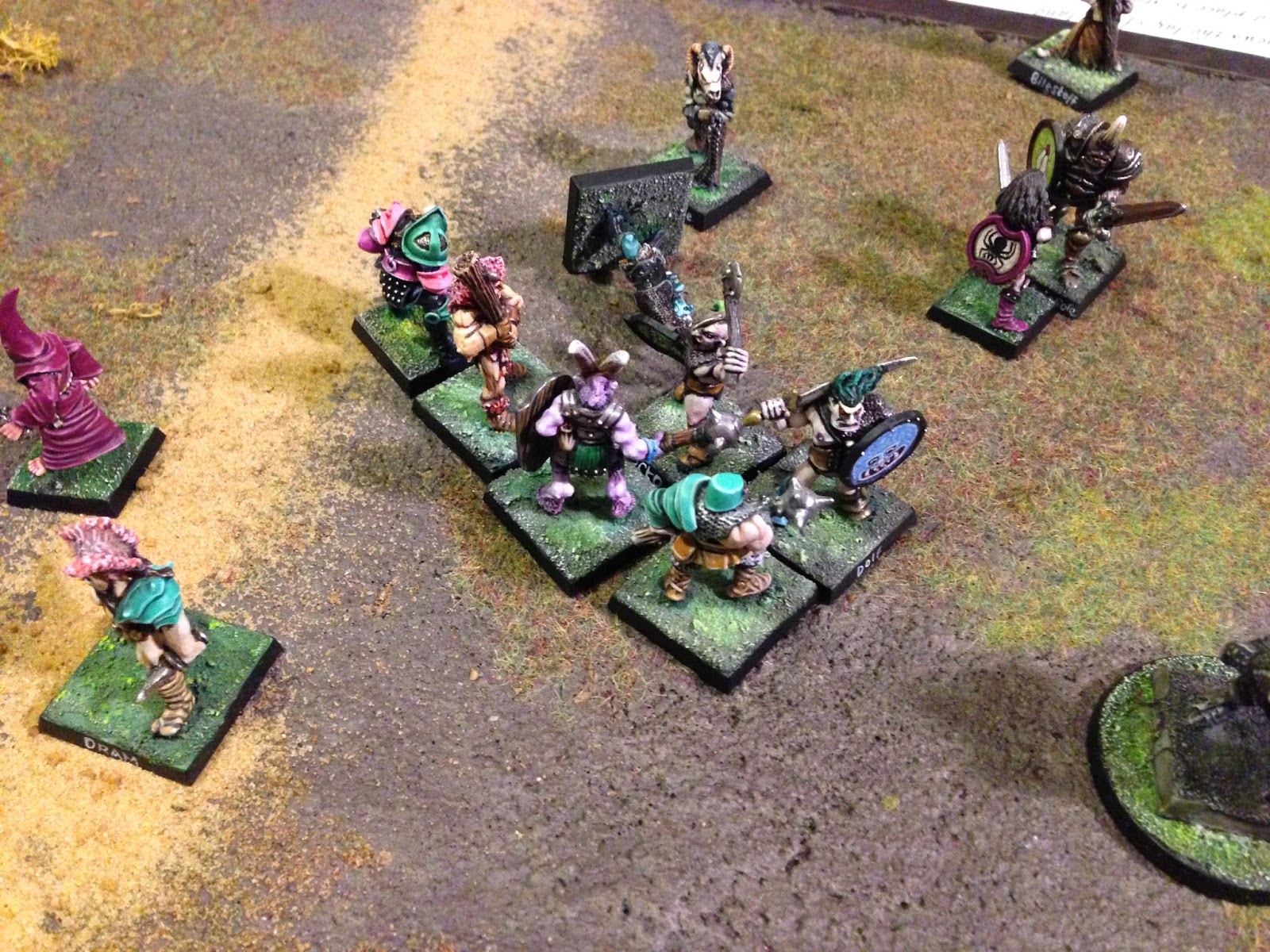 The melee continues in front of the cottage's weather beaten beams. Having stopped the Nurgle charge, the Slaaneshi forces begin to fight back, felling a pale skinned thug and pushing his companions back. Behind them, the struggle between the two champions remains a deadlock. 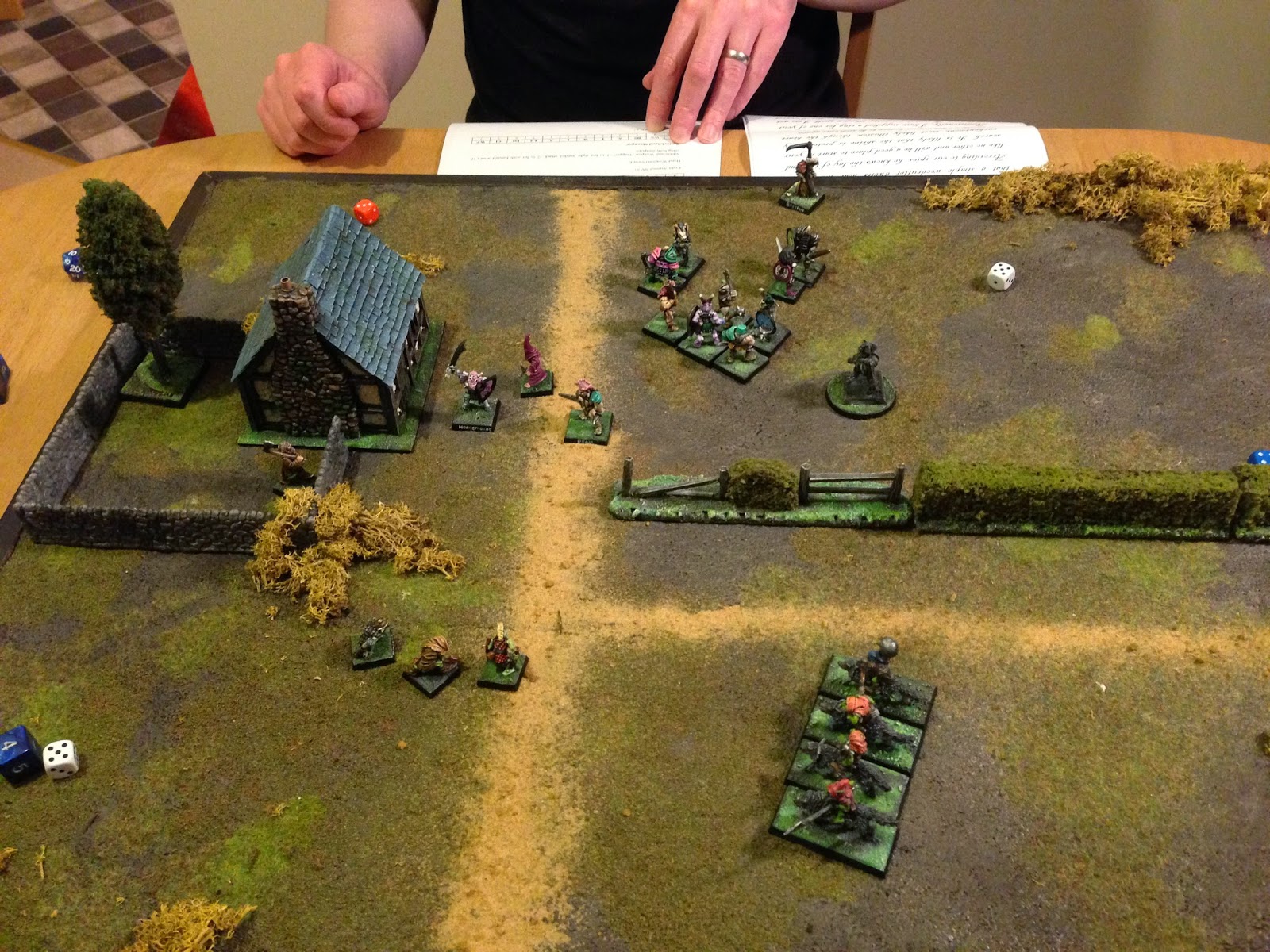 As the flail wielding warriors meet and clash the surviving goblins begin to move across the clearing to regroup by the road. Their wolves can smell the fresh blood that has been split to north and snapped eagerly at their bits. Their new leader, Grombottle, is puzzled to see a strange statue in the place of what he was sure was a tree before their charge. Only, the statue seems to be crumbling... And from within, a devilish red light can be seen... 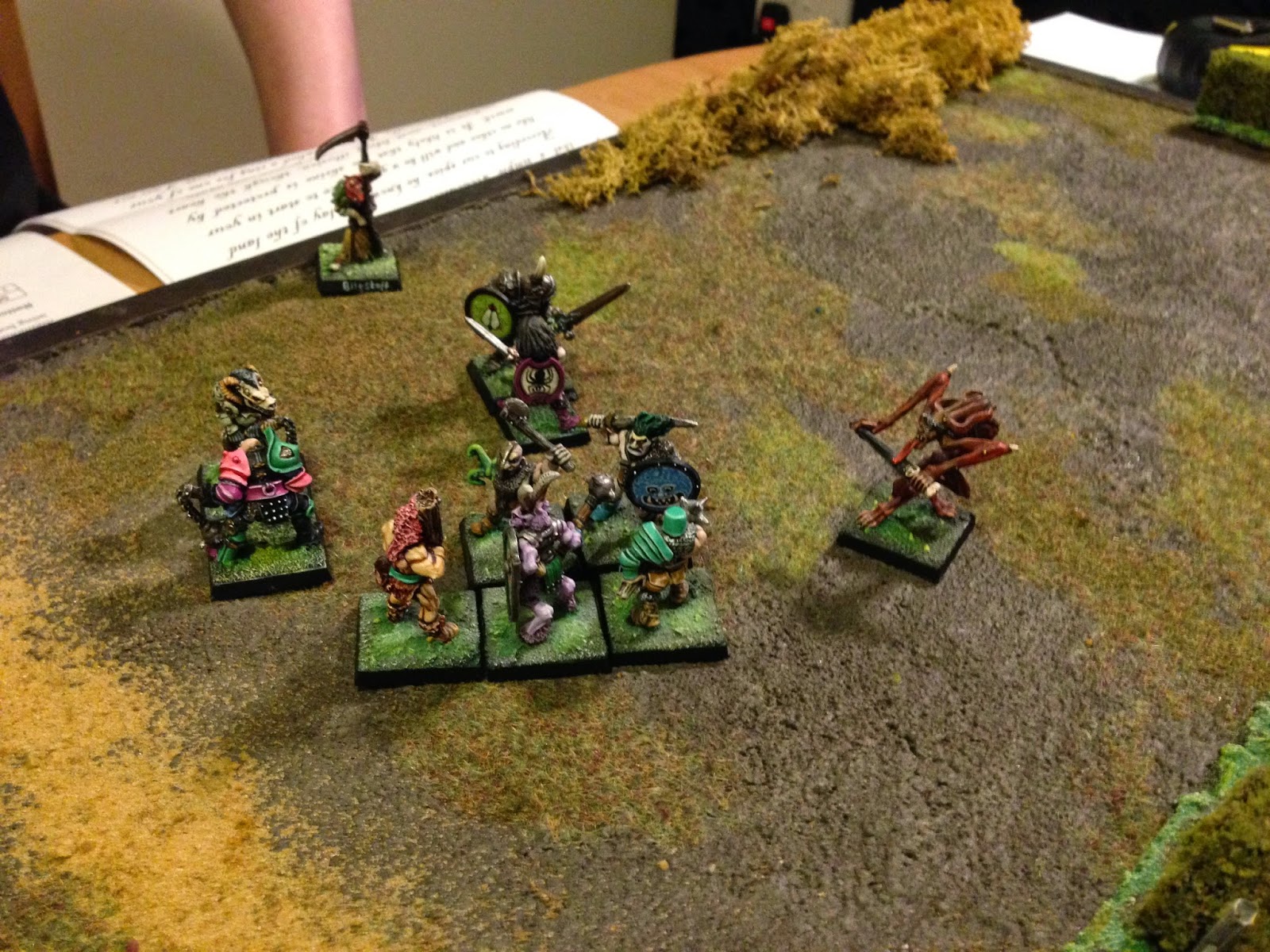 With a bone crunching crack, the statue implodes to reveal the twisted form of a Bloodletter! The daemon of Khorne springs forth inspiring terror in all who witnesses its daemonic birth. Spotting followers of the hated Slaanesh, the daemon becomes frenzied and attacks the closest fighter. 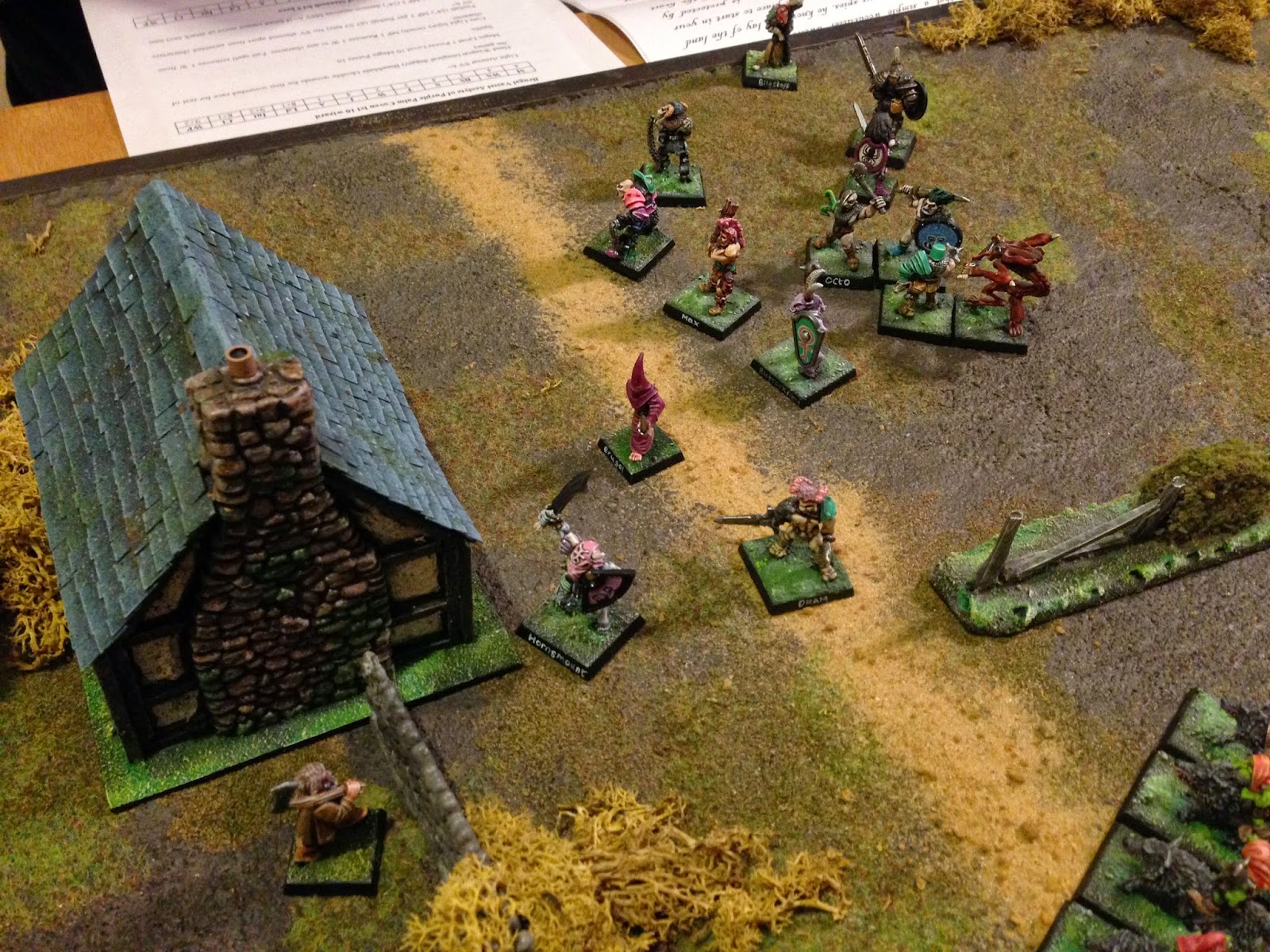 Fear is a powerful force. Despite their familiarity with the creatures of chaos, followers from both sides flee in terror of the daemon. Their panic spreads to the goblins, who save for a single soul rooted to the spot, run for the safety of the woods. Voight's nerve fails him and he too retreats back into the woodland. The few chaos followers who master their fears turn to face the daemon, eager to fell the creature and attract the attention of their dark patrons. Nurgle or Slaanesh, they fight together. 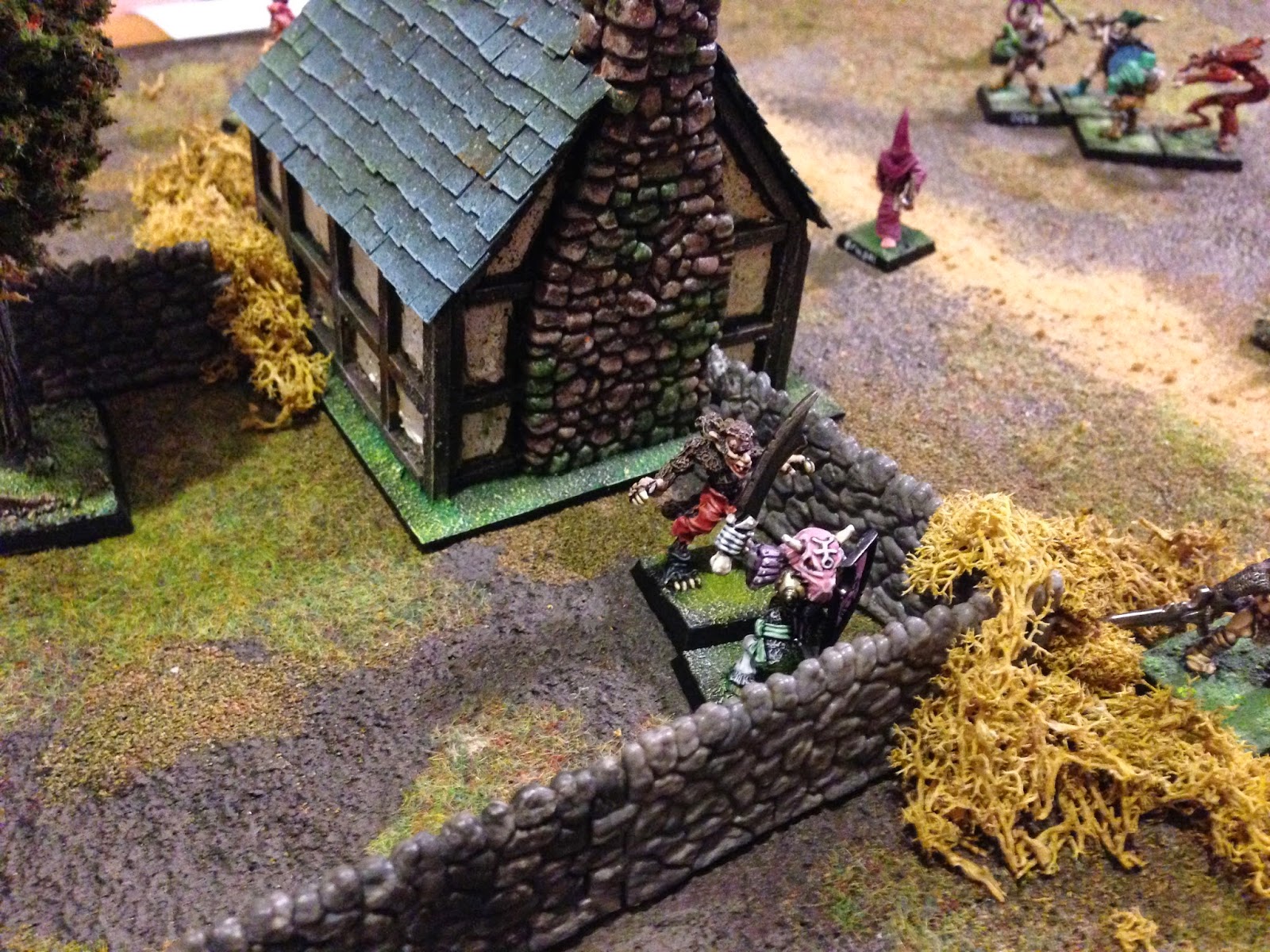 Meanwhile, a panicked beastman of Slaanesh scrambles over the woodcutter's wall. A terrifying change overcomes the human. Hair sprouts through his skin, his face twists into that of the beast! Jon is none other than a werewolf. Enraged by the invasion of his garden, the were lashes out at the beastman but fails to connect with him as he flees. The beastman scales the second wall and is away. 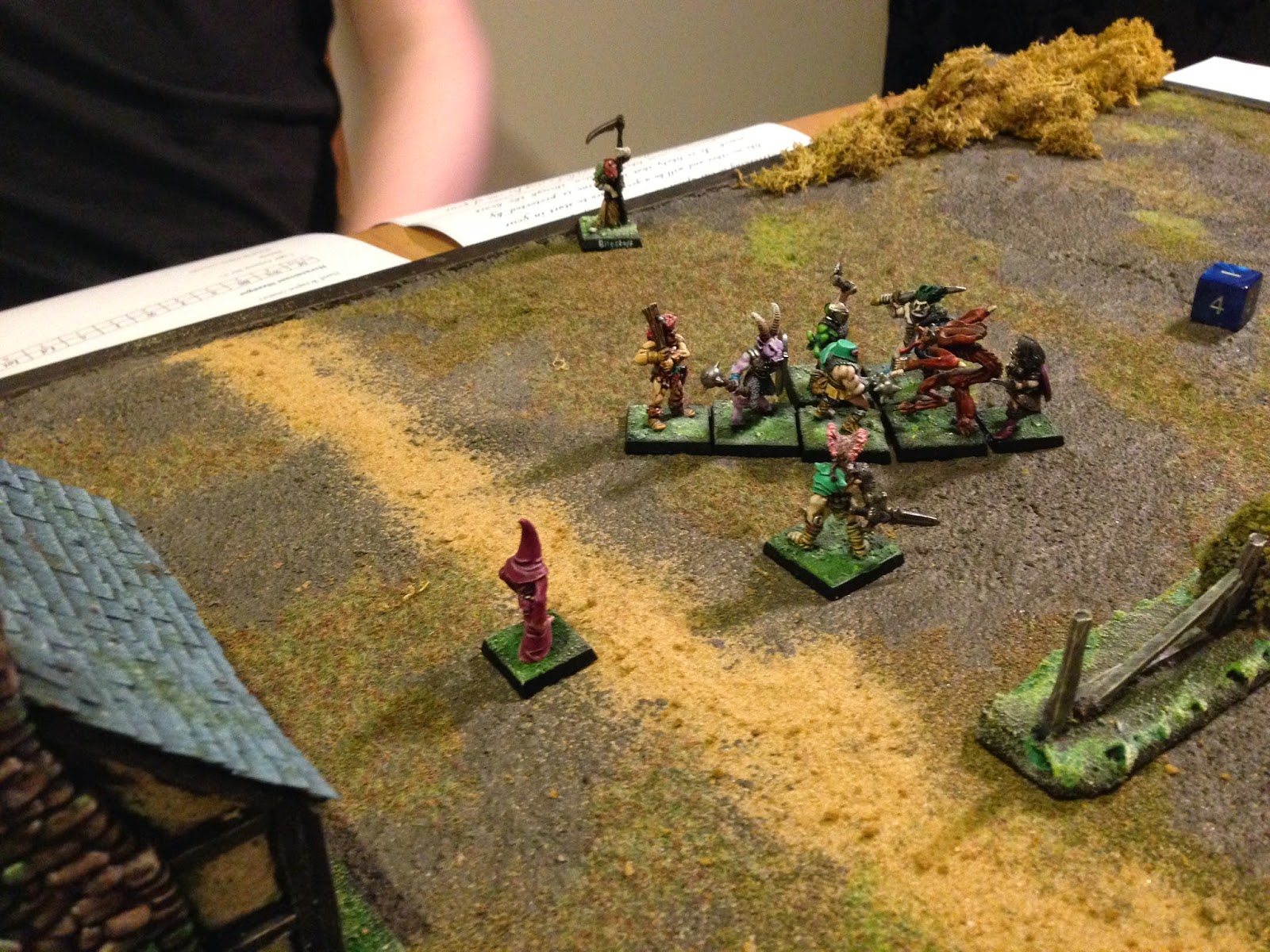 With the panic over, the motral fighters of both sides engage with the daemon. The bloodletter lashes out with his teeth and hellblade but fails to even land a blow on the mortal with the green helmet. The thug, Felix, parries frantically with his weapons and defends himself with almost inhuman bravery. Slowly, his fellow mortals begin to surround the daemon but Felix has been noticed by his god. 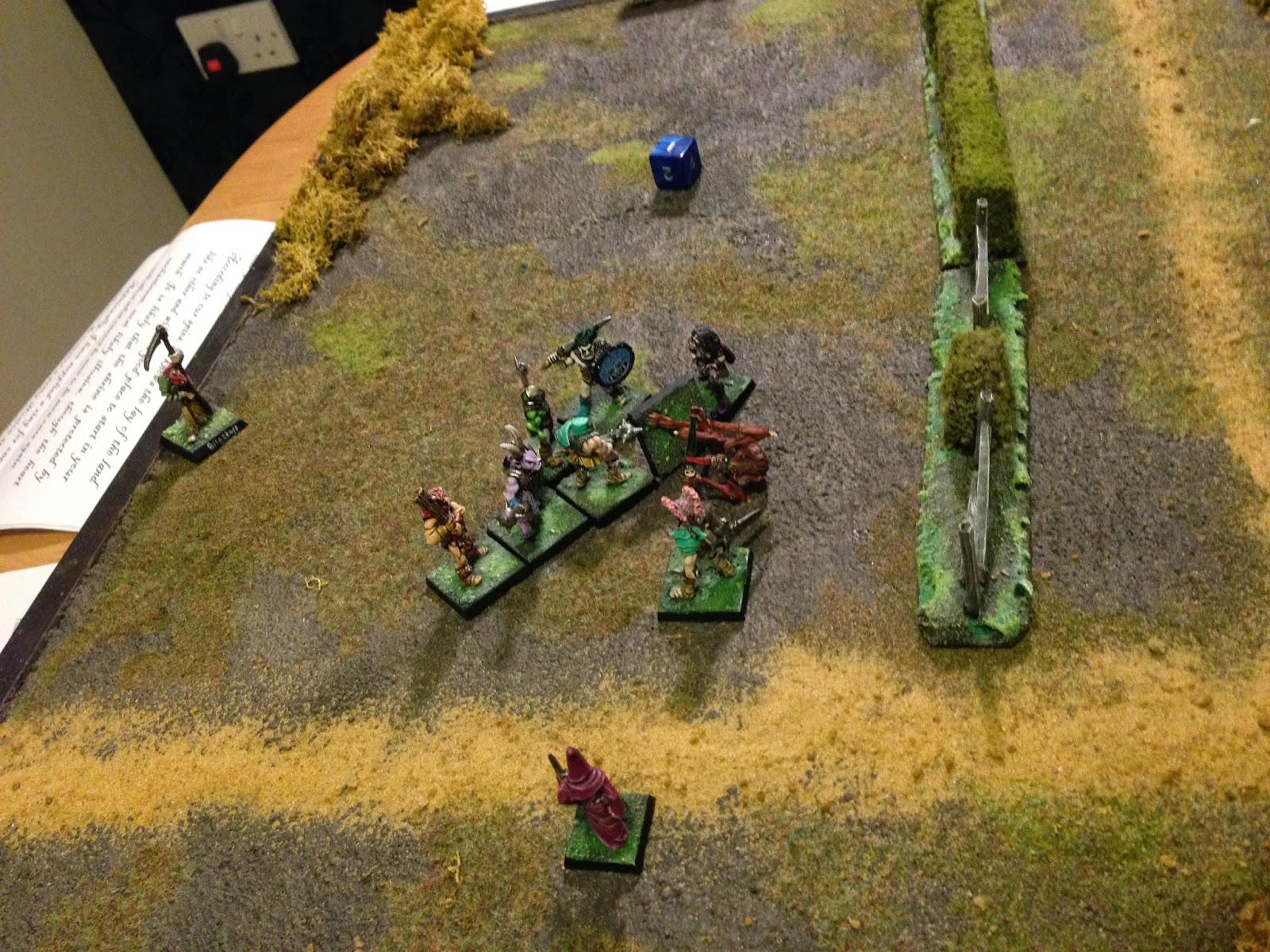 Feeling the eye of Slaanesh focus on an underling, leaving her actions unacknowledged, Blandidir strikes out with her magical blade. It finds its mark! The daemon's daemonical protection cannot withstand the blow and the entity retracts back into the warp as quickly as it came. 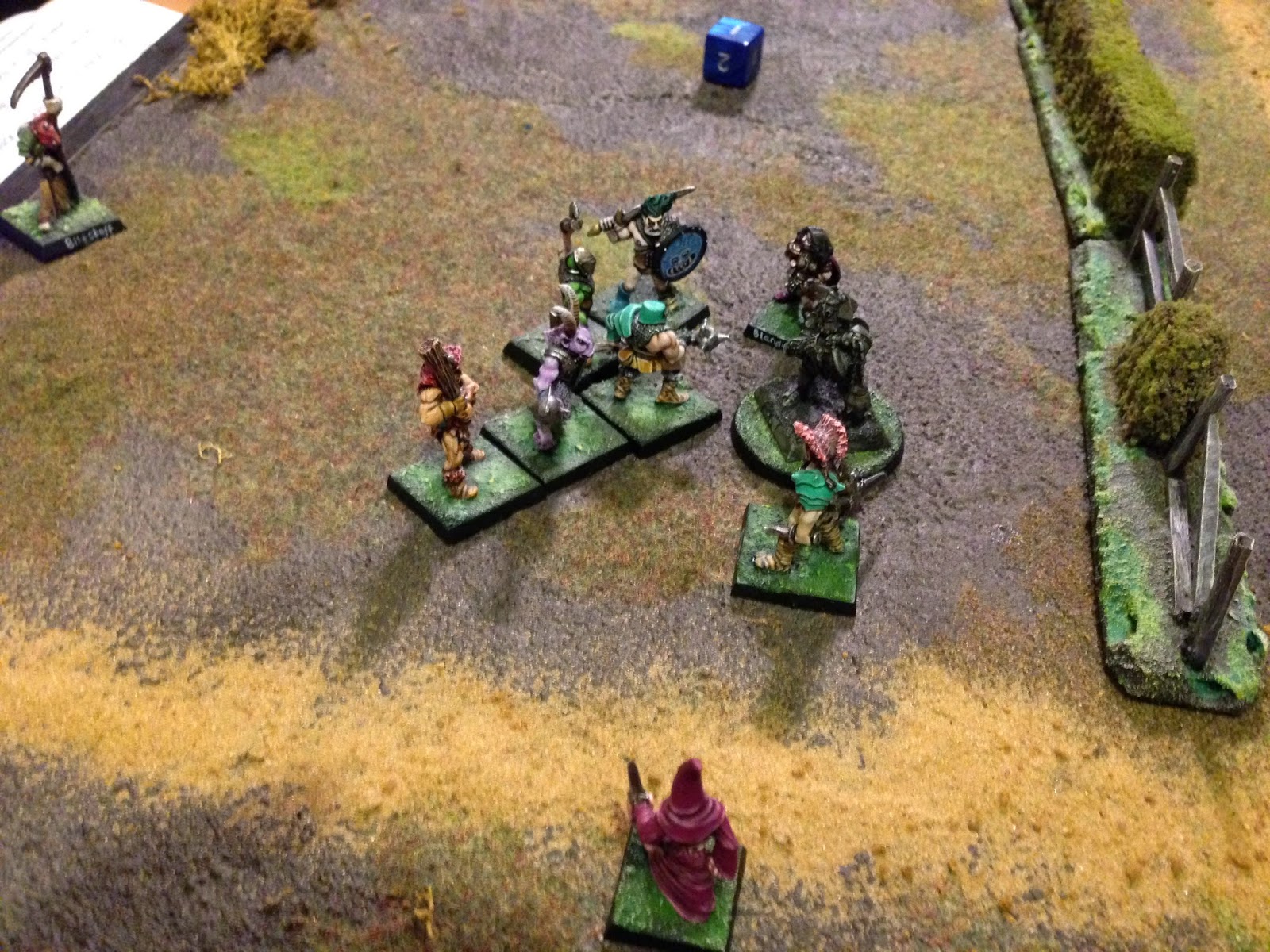 Leaving in its place the cursed statue. Brugal Vassel realises that the daemon is bound within the statue once more.


"This is no shrine to Our Prince," he declares, "but an abhorrent entrapment of Khorne! This is a place of worship of our enemy not our Lord! 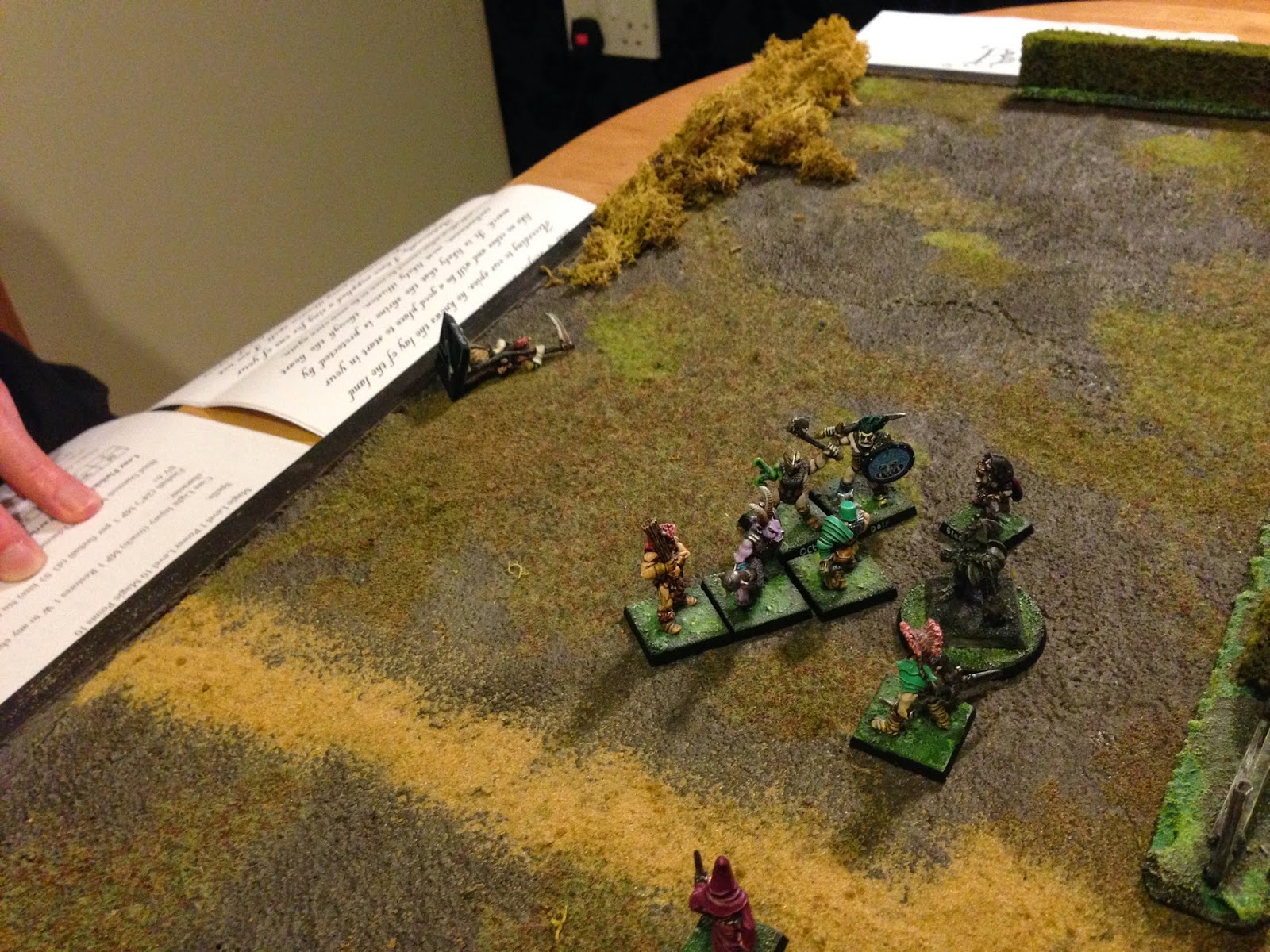 Rage boils inside Brugal at the trickery. Somewhere there is a traitor to their coven. Someone keen to see them unwittingly do the Blood God's work. His anger boils up into a flaming fireball spell. Brugal unleashes it at the Bilestaff, the Nurgle sorcerer and strikes the cancerous magician down. 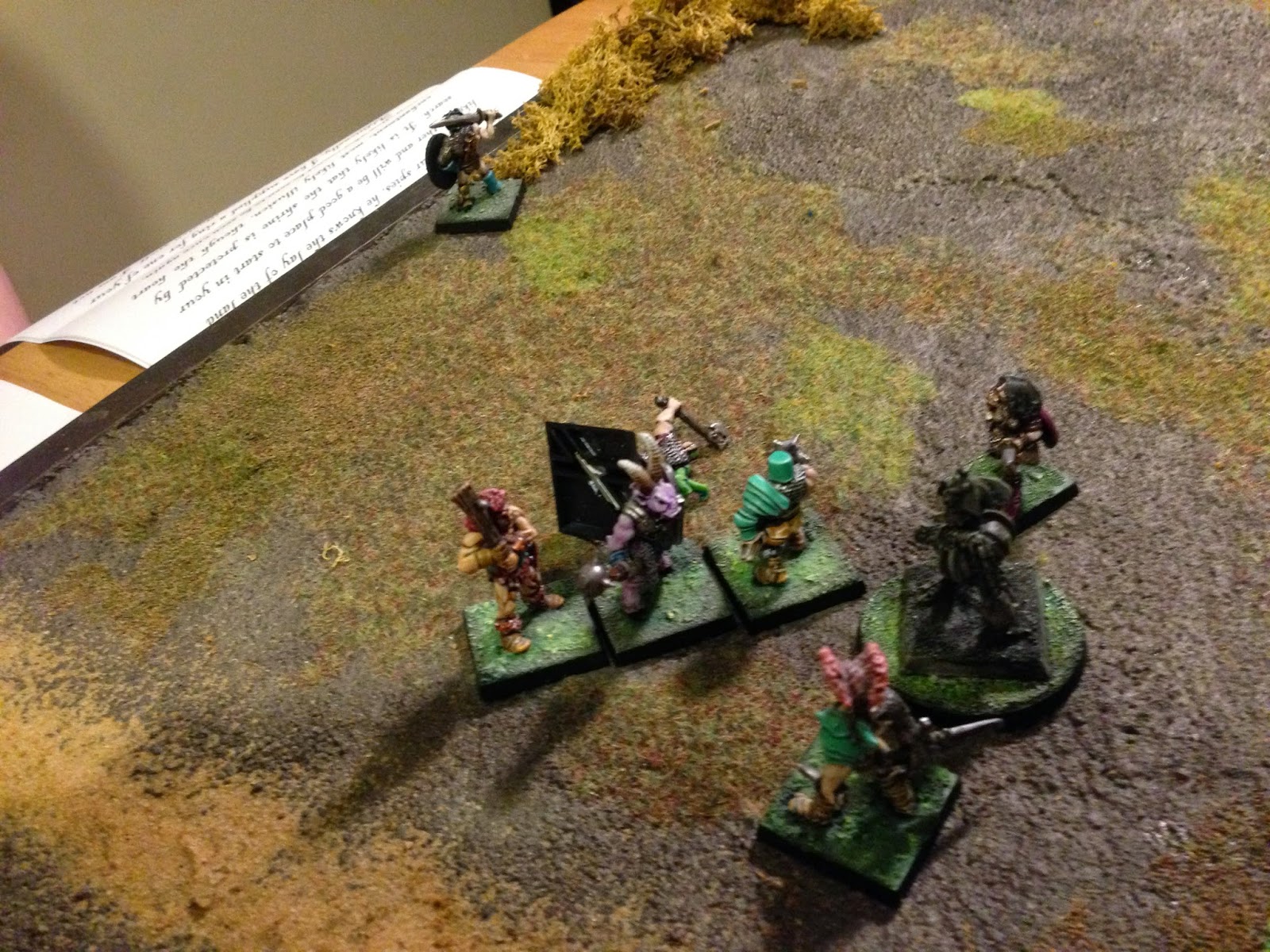 As the powerful mage collapses, the remaining Nurgle forces loose heart and flee. One is cut down while the other narrowly escapes a second fireball attack form Brugal. 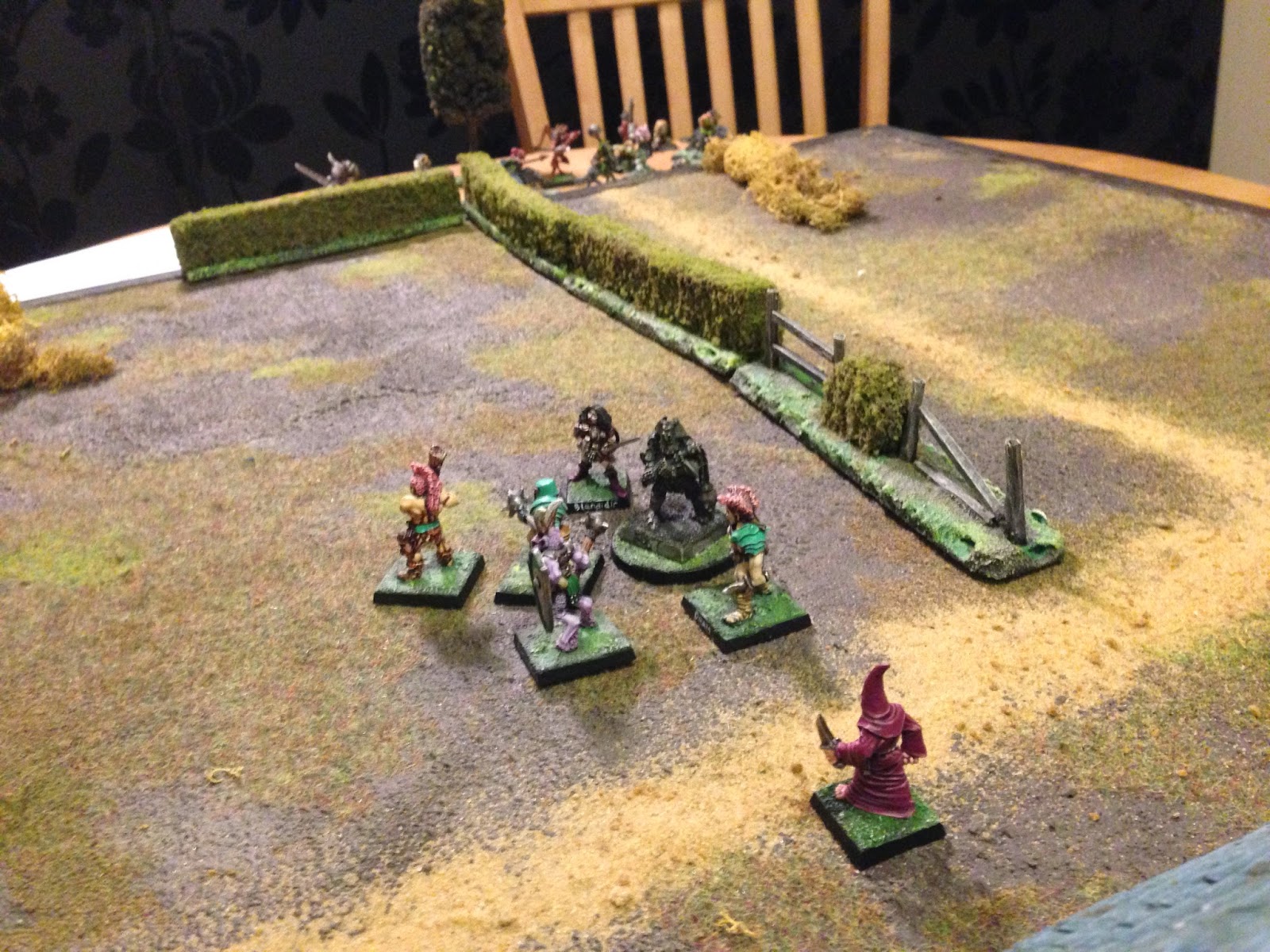 At the end of the skirmish, Blandidir controls the clearing with most of her warband. There is little left to do but contemplate their betrayal and to seek answers elsewhere. Slaanesh, pleased with what he has seen this day rewards the coven well. Felix, for his bravery fighting against the daemon and not suffering a scratch despite its frenzied attacks, discovers a set of giant fangs begin to protrude from his jaws. Perhaps in recognition, or indeed mockery, of his engagement with the daemon. Blandidir feels her god's attentions flow through her body with delightful spasms and pains. Her strength is much increased, despite her outward appearance. This gift will not doubt be enough to ensure no stalemate next time she meets the Nurgle champion, Voight in open conflict.
Posted by Orlygg at 04:43