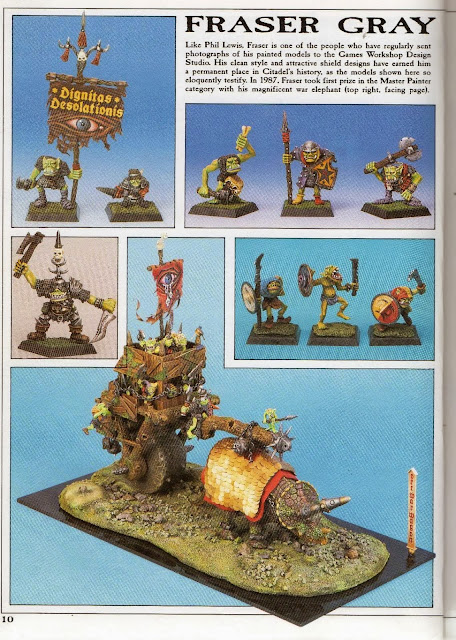 Last September I started work on tracking down Fraser Gray, the unique and mysterious miniature painter who dominated the scene in the mid to late '80s, even winning the first GW painting competition, then called The Master Painter! I spoke to a several people who knew him back in the 1980s, and others who have met him in more recent times. What I learnt through my investigations is that Fraser is a deeply private man who is still producing models of great skill in the genre of military vehicles. If you want to read more about my search then look here with Fifty Shades Of Enamel.

One things was certain. He preferred to remain anonymous.

Just when I thought the hunt was over and nothing more could be learned about the man who I (and many others consider to be) the Greatest Miniature Painter Of All Time I received some correspondence from ex-'Eavy Metal painter, Andy Craig. Now Andy is very well known to members of the Oldhammer Community on Facebook, and contributed a memorable (and highly popular, if page views are anything to go by) interview to this very blog. If you missed out first time around or fancy a refresher, his interview can be found here. 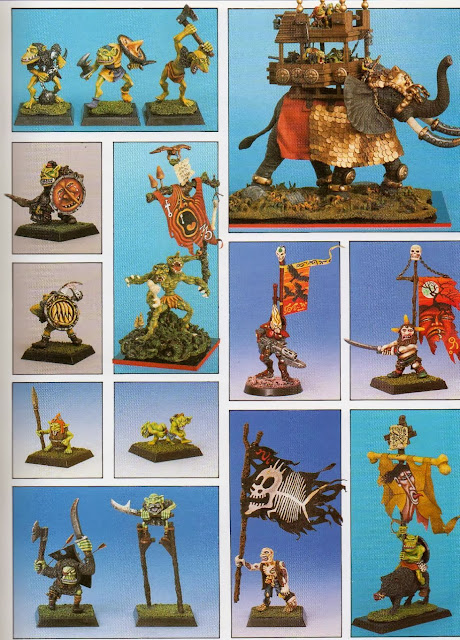 A few weeks ago, Andy dropped me a line to explain that he had been sorting through his home when he had discovered the letter he referred to in his interview. Not surprisingly, considering twenty-five years have passed, the letter was rather fragmentary and fragile but Andy was anxious to share what he had found with the Oldhammer Community. The reason for this would soon become apparent.

Andy filled be in with a bit of background about how he a Fraser became friends. "That letter was sent to my home address," Andy told me. "Fraser often visited the Studio, but he was a bit of a shy guy. He really took an interest in my work and asked me many questions regarding how I painted certain colours. We became good friends." 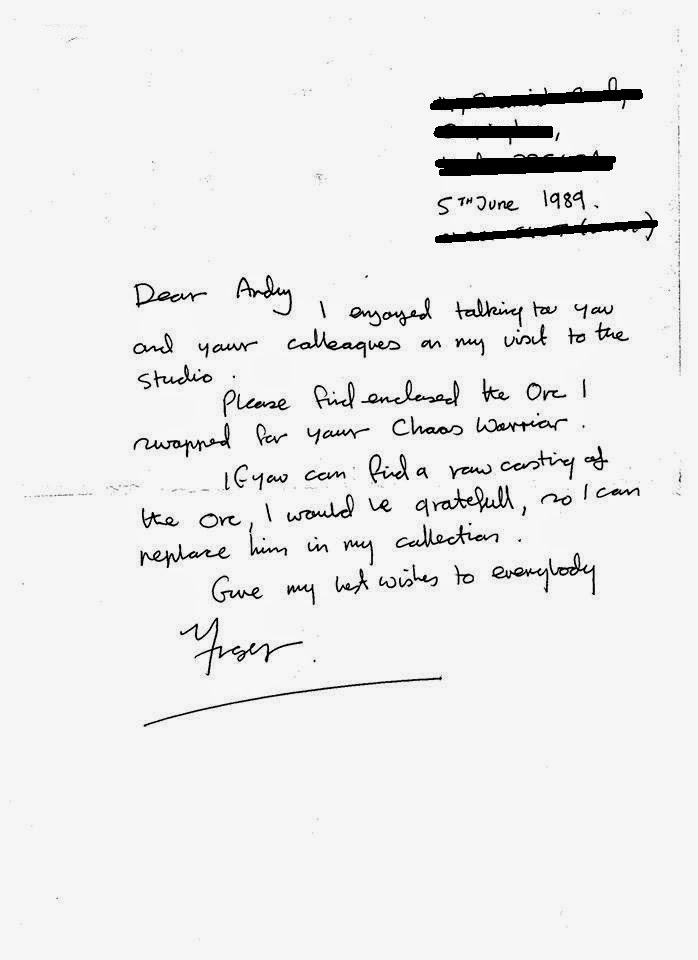 Here we have the covering letter that Fraser sent to Andy. He remarks about how much he enjoyed his visit to the Design Studio. The letter goes on to discuss the miniatures that the two had shared, and I really must ask Andy if he still has the orc! However (and this is when things become very exciting for the Citadel Historian and Old School enthusiast) attached to the letter was a three page document that described in detail Fraser Gray's approach to modelling and painting. It really is a remarkable document that details how Fraser used to work and produce those incredible painted models.

And here it is, unedited and presented to you via Andy's scanner today. I have taken the liberty of commenting on each page underneath with added information that may (or may not) be relevant to the enthusiast. 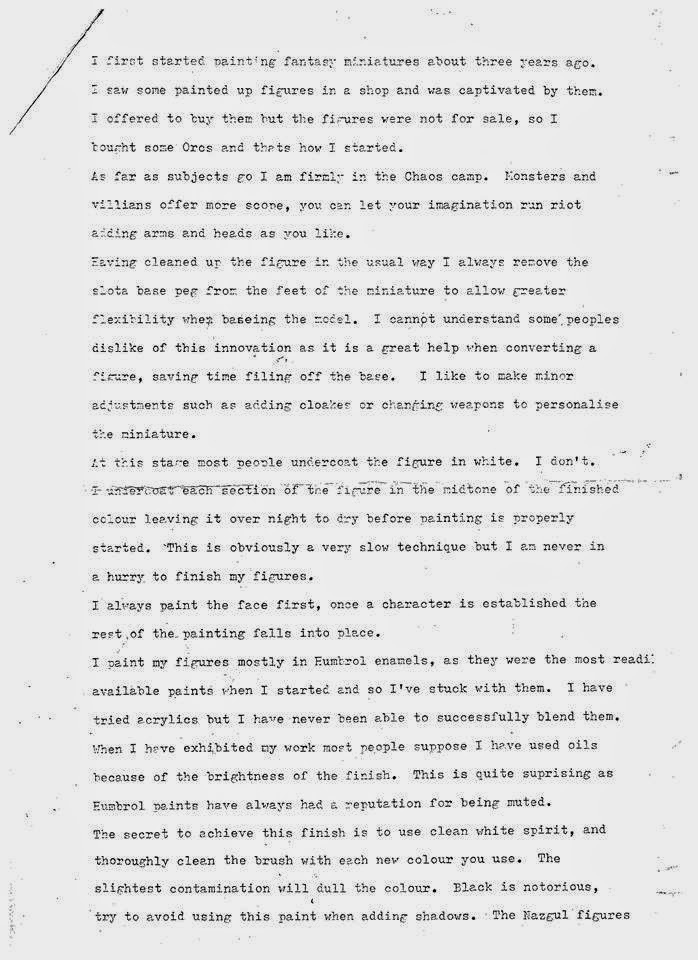 Fraser refers to the once familiar sight of painted miniatures in fantasy shop windows. You think GW stores are the only such place you'd see such things? You'd be quite wrong. From the mid '70s, through to the later '80s there were many, many independent fantasy/roleplay shops all over the country. They nearly always resided in the rougher quarters of the towns they inhabited and seemed to groan with stock, not surprising really as they were often tiny cramped spaces. Oh, but the blister wall was a thing to see! Quite often, you would see a handful of painted models in the window were often for sale. In fact, I remember visiting the GW store in Southampton in 1989 and being amazed that they offered cash for well painted models!

He goes on to explain his collecting ethos. Chaos and evil creatures due to the possibilities that they represented. One of the funny ironies of 21st century gaming is that these so called forces of chaos have been the most generic form of fantasy.

The recent innovation of the slottabase is also referred to here. Unpopular at the time (and never copyrighted by GW) the humble slottabase was only a few years old when this letter was written. It is interesting to read that Fraser removed these to provide greater flexibility in the basing position. Personally, I have always been loathed to removed the tab as I feel it is somehow damaging the model. I tend to alter the bases themselves now, after all, plastic is easier to cut that metal.

It is interesting to hear Fraser comment about conversions. He was clearly an advocate of the weapon swap! 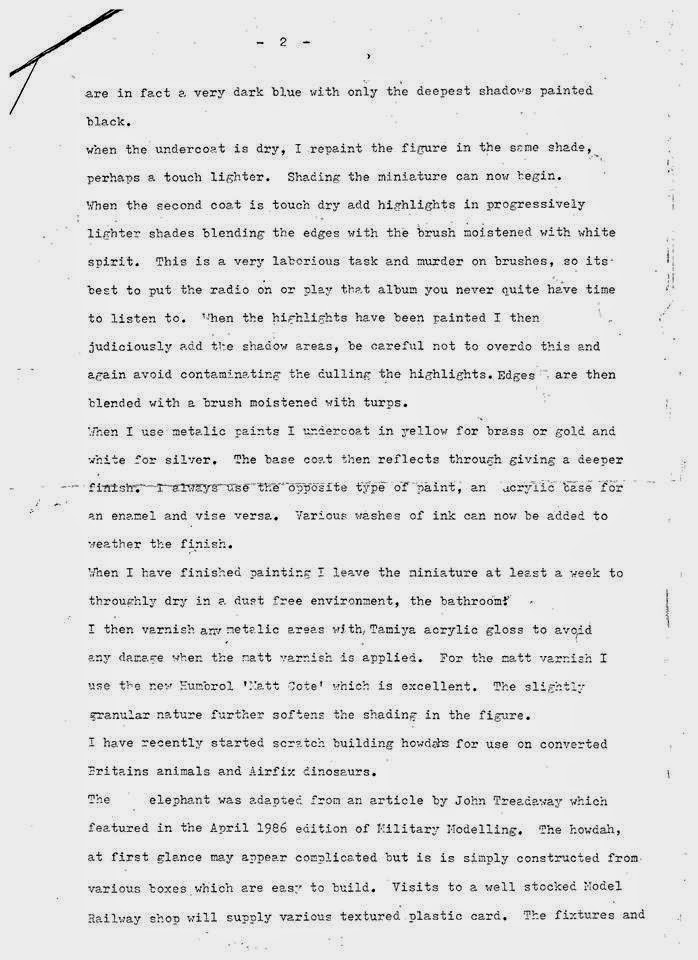 Some excellent advice there about painting with gold and silver and certainly something I shall be trying in the future. I had never thought about using a yellow basecoat for gold, its really rather intriguing.

Reading through these words, it strikes me about how patient Fraser was. After all, his preferred method of painting models took hours to finish and up to a week to dry! Serious commitment like this must be a sure sign of genius like types!

Additionally, Fraser goes on to discuss how he had just started scratch building howdahs, and the elephant he discusses can be seen at the top of the second image at the start of this article. I love the idea of building armour plates from hole punch leftovers. Again, that is an idea to be stolen and used! 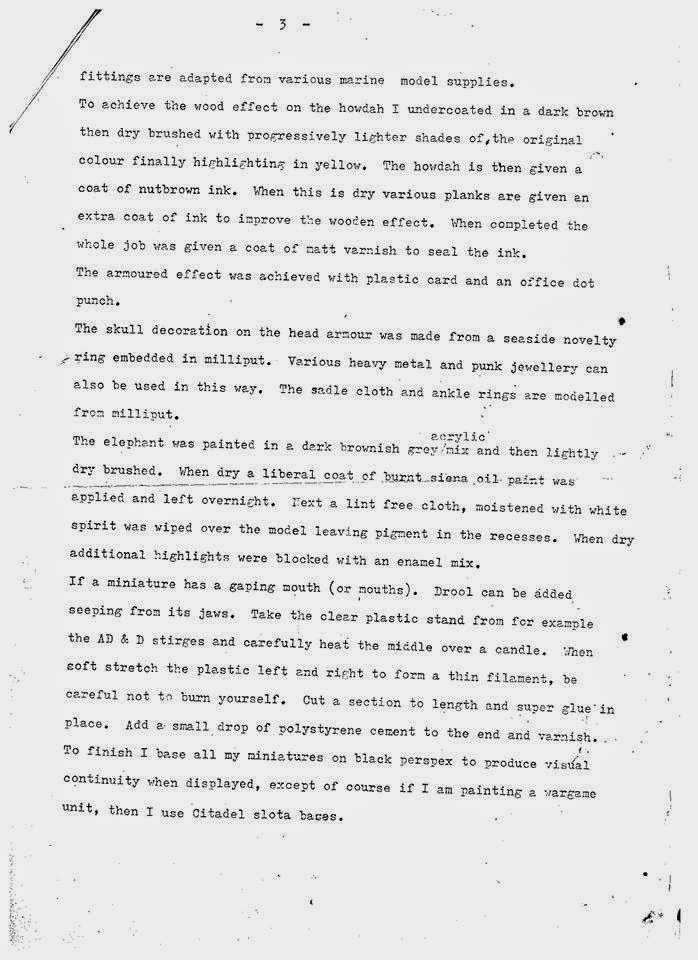 The method described to make saliva is a new one on me and again something that I am itching to try. I wonder if modern plastics will react in the same way as those of a quarter of a century ago?

His last sentence is an interesting one. Fraser talks about using perspex bases for display pieces, and if you scroll back up to the second image (the one with the elephant) you can see a couple of examples of this style of basing. What's curious is that Fraser states that Citadel bases were used for his 'wargames' figures. Does this mean he actually played Warhammer Fantasy Battle with thses gorgeous models? What a battle report that would have made, eh? 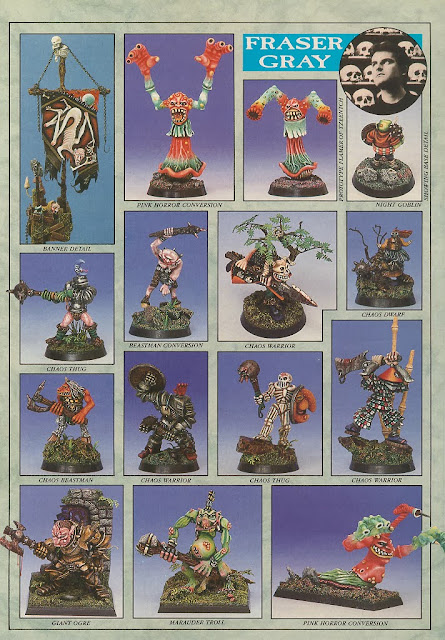