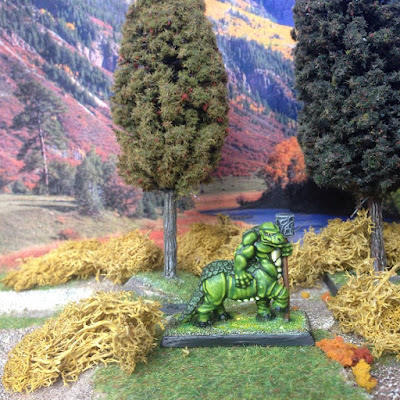 February is rarely inspiring here in England. The weather being generally wet, cold and grey skied. This morning seems to be a slight exception, with a brightish light flooding through my window and shining across my parlour room table. I am not the only one up and about either, for gunshots roll around the village as somewhere, someone enjoys a late winter's hunt.

Having been successful in an entirely different hunt, I recently acquired a long longed for model - namely the limited edition single cast zoat, one of my favourite ever figures, for a very reasonable price. The trouble was that the miniature had been very poorly treated by a previous owner and the detail was very badly clogged up with white primer. The model required a long soak in a Dettol solution to shift the worst of the build up, but I was unable to remove all of the paint before starting work. I used a series of very thin layers of white to successfully prime the model before starting work and looking at the completed piece, I don't think too much detail was lost. Where I did have concerns, I used additional shading to 'cheat' nature and create the depth the figure requires.

This figure was painted entirely with Foundry's excellent paints, though I used lots of colour mixing to create a different tone of green I used last week when painting my snotlings. I used a chestnut brown to mix in with the dark green base and created each highlighting stage by adding increasing amounts of mid yellow. I was hoping to achieve a more lizardlike look with the skin. 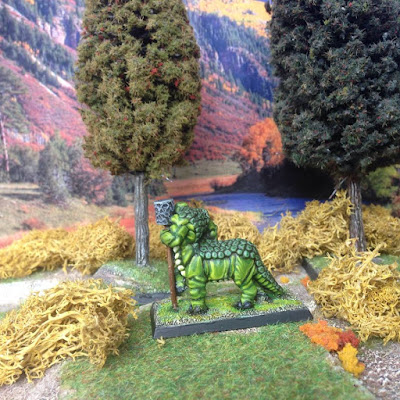 Looking back, I much prefer the look and feel of this version of the zoat. The pose seems more regal and grand compared to the lumpen, ugliness of the two part zoat released later on. Having painted the later example I now know which one I'd use in a small skirmish game. All in all, not my finest work but not a bad result for three hours painting yesterday morning and twenty minutes basing today.

I wonder what whimsy will select for me to paint next?

Email ThisBlogThis!Share to TwitterShare to FacebookShare to Pinterest
Labels: Zoat