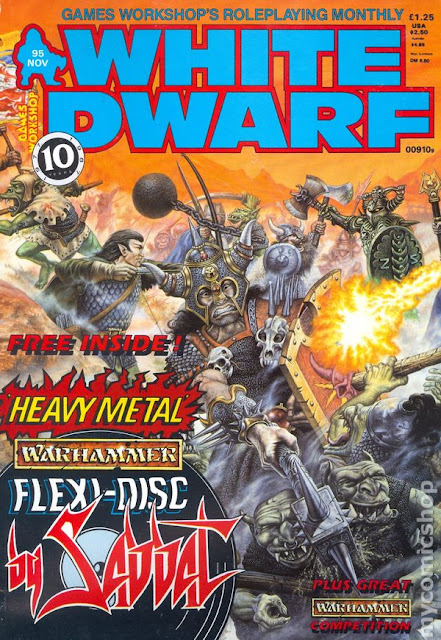 There are a great number of ways to collect classic Games Workshop stuff. For starters you could just amass unpainted lead figures and keep them in bags in your house - not even worrying about cleaning, basing or painting them. Some people go further - such as my friend Stuart - and collect as many of those miniatures as they can mint in the blister packaging.

Then, of course, there are the publications themselves. The 'literature of Warhammer' if you like. For most, I would imagine this would involve chasing down real copies of all of the hardback rulebooks and supplements that Games Workshop published in whatever period excites you the most. You could go further and collect the magazines, flyers and novels too.

Like any range of collectibles there is that small subsection of the more unusual things to locate for your archive. Copies of Black Sun, or the Dwarf Flasher or one of those amusing GW staff Christmas cards that you occasionally see. Quite the strangest has to be the Flexi-Disc from White Dwarf 95! 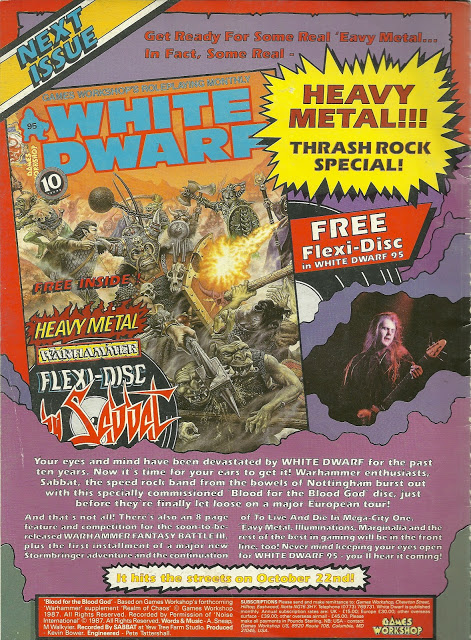 It's arrival between the pages of the World's Greatest Roleplaying magazine was hardly unexpected. As you will have seen above, the issue was advertised before hand with a supporting release date - which is something rather unusual for White Dwarf at this time.

But trying to find a copy of the magazine with the Flexi-Disc intact is becoming a bit of a challenge now. I was lucky. I bought mine in the years before there being an 'Oldhammer' and nothing could be found on the subject of older Citadel products online beyond a couple of White Dwarf archives and a Wikipedia entry or two. I had just got back into gaming with then forth edition of Warhammer 40,000. I had done Warhammer to death in the previous decades and fancied having a go at something a bit different. I read widely, absorbed the then new 40k novels and absorbed all I could about this newer universe.

But there was something lacking. Even in the silver age of Phil Sawyer's White Dwarf and so I slipped online during my lunch breaks at an NQT and decided to buy up old White Dwarfs I enjoyed as a youngster. Not knowing where to start, I chose issue 90 and proceeded, in order, to buy and read each issue as a supplement to my 40k gaming and collecting.

My first true issue of the magazine was WD 108, so I was keen to explore the eighteen months or so of GW I had missed before finding the hobby in 1988. It was quite the journey. The magazine was very different from what I remembered and starkly so when compared to the magazine I was buying off the shelf at W H Smiths.

The Flexi-Disc add certainly took me by surprise when I first saw it. This was SO far away from the GW I knew - one that would happily go toe to toe with the greasy thrashers that made up the ranks of Heavy Metal fanatics it was quite refreshing. 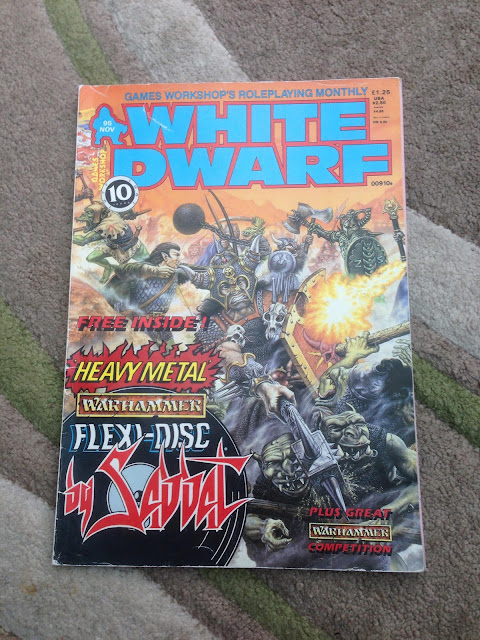 And here is my copy. There is a wonderful article all about how the disc came to be on the inside of White Dwarf. If you are interested - have a look here at my Warhammer Rocks article I did some years back. In short, it seems to have been all Bryan Ansell's fault, as according to the article he decreed one day that it would be a great idea to have a giveaway disc in the magazine. A chance meeting with John Blanche at a Slayer gig, saw Sabbat being offered the chance to record a song inspired by the developing Warhammer Mythos.

That song was to be 'Blood for the Blood God'. 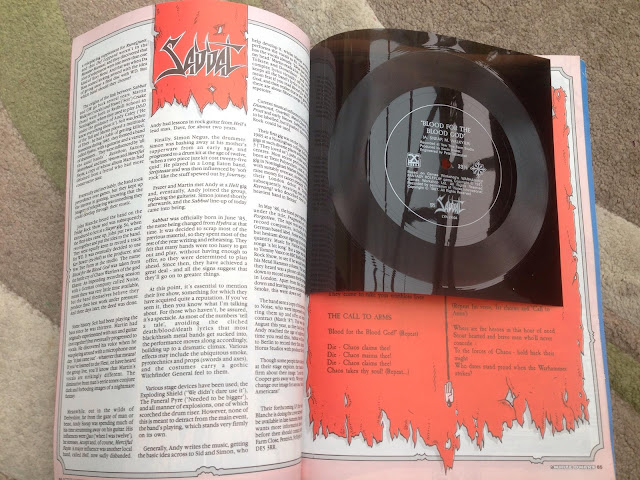 If you are lucky enough to have a copy of this magazine, or can find one today with the disc intact, then you are holding an unusual piece of Warhammer history. If you look above, you can see that the disc itself is even marked by the symbols of Chaos and Khorne. Nice!

Of course, you could be cynical here and question why the disc was done in the first place. After all, its shares space in a magazine that sees the launch of Warhammer Third Edition too. A game that had been incredibly successful for Citadel, and one that would go on to conquer the world. Was the plan to draw in those crazed metallers once more? It's certainly clear that there was once a very strong link between Heavy Metal music and roleplaying/fantasy wargaming. They were, believe it or not, the target market for the games and magazine - little Timmy was nowhere in sight.

Still, its an enduring and intriguing footnote in the history of Warhammer and one that many people are unaware of perhaps due to the far better known 'Realm of Chaos' album by Bolt Thrower.

And if you are interested in what the song sounds like then give this YouTube link a click. Some fan of the song has put together a video using various images (some of them of our period of interest) and supplies the lyrics too.

All together now... Blood for the Blood God!