Night of the Living Lead III: Jeremiah O. Lygg and his hired goons 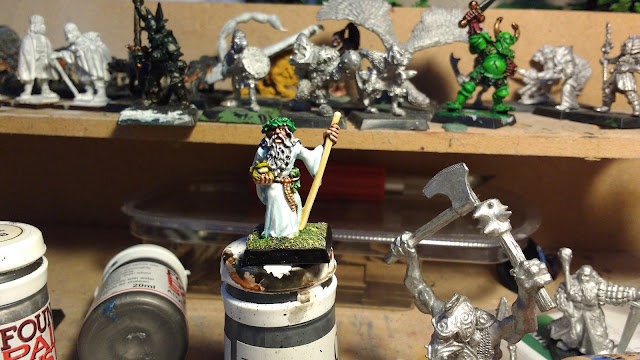 Good evening all! I have managed to put together a nice little warband for tomorrow's game at the Wargames Foundry and the leader is this; one Jeremiah O. Lygg, the rather dubious druid. It is fair to say that he isn't a good druid - more a dishonest one - but he was great fun to paint. He is part of the old Citadel C series from 1987 but for some quirk of fate was never actually released. You can find an unpainted example of the figure here at Solegends if you are interested.

I won him in a painting competition last summer at BOYL3 and he has been sitting around for ages in need of painting up - so I took the impending game as my cue to get him finished. Sorry about the crap photo - but by the time I had based him the light was gone and I had to resolve to using a desk lamp - which washes out most of the colour. I will take some better photos of him and his 'hired goons' tomorrow.

He will be leading these gents; Paulus, Chico, Stefan and Ratter on a perilous adventure down an abandoned gnomish mine.

Deep in the mines at the dead of night, a grinding sound. But the sound of the rock being hewn is not the work of the miners. None of the gnomes of the village of Thingwall have been down the mine in days. Nobody would dare, not since several of the miners went missing. Some were found days later with their throats slit and their blood spilled on the floor in the shape of a pentagram. Others have simply disappeared.YOU are an adventurer, called upon by the Duchess of Thingwall to help the little people in their hour of need. YOU and your band of companions have been asked to investigate. Who or what has caused the disappearance of the miners? Who or what is producing the strange grinding sound in the night?Beware. Not all is as it seems in the village. Who can be trusted? More importantly, what's in it for you? And how can you be sure that the other would-be 'investigators' aren't involved in the murders and disappearances themselves?An adventure for small bands of warriors (3-5 models) using the Warhammer 3rd edition rules. 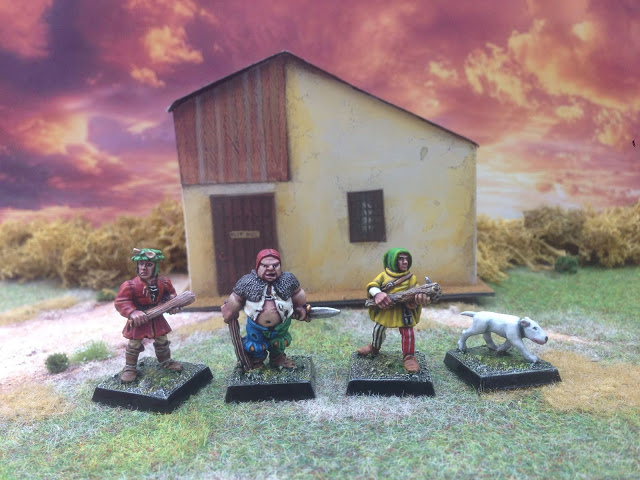 And here they are, in a much better picture I took in the summer.

As always with these scenarios, and you can expect a full report on all the goings on Sunday, we all had to draw up some background for our forces for Richard, the GM, to play around with. Here's mine:

"Oi, that's my bacon!" Chico blustered, grabbing Paulus' wrist and squeezing his flesh until the greasy meat was released back onto the filthy table. Paulus gave his fellow footpad a hearty shove and leaned back against the slime-ridden wall that held up the abandoned farmhouse, the smirk never shifting from his lips.
"Calm down you two," Stefan mumbled, "I have nearly got the lead up to temperature and need you rapscallions in your places. These coins won't forge themselves."


Chico picked up the stamp Stefan had left on the workbench. Next to it were the cooling piles of the previous hours work - piles of ersatz coins any fence would be proud to shift. He peered at the tiny writing that curled across the face of the coinage.
"What king is that supposed to be?" He asked for the hundredth time.
Stefan sighed, and told him.
"McDeath."
Three ne'er-do-wells, Chico, Stefan and Paulus, are busy doing what they do best - forging coins and running up debts. They are just about to complete work on a huge order of 'McDeath' groats when there is a sharp knock at their door. Sure that their whereabouts were secret, the three footpads are startled and reach for their blades in panic. Before any of them can react, the battered door creaks open to reveal the thin, wiry frame of Jeremiah O. Lygg - the dubious druid of Dunststadz.
"Good evening, there is no need to be alarmed!" The druid said, his deep voice filling the room twice over. "Do settle down Gerald!"
Chico looked at Paulus. Paulus looked at Chico.
"Who's Gerald?" They asked in unison.
"I need your help once again," Jeremiah went on, ignoring (or perhaps, not hearing) the question. Adventurers are needed to clear a mine to the South and there are, well, reasons why I need to be there. Reasons that are not open for discussion... Do sit still Gerald!!"
Baffled, Chico peered around the room to check that there were indeed only four of them. Who the blazes was this Gerald?
"I can pay," the druid went on, "and in Imperial silver too!" The old man's eyes looked over the fraudulent coins on table with indifference. "Do you still have that old hound, what was he called? Fatter?"
"Ratter." Paulus corrected.
"That's right!" The druid exclaimed, adjusting the pouch at his side. "I have need of his nose - stop that Gerald! We shall meet beneath the sign of the crow at dawn. Don't be late."
With the words spoken, the druid turned to leave. "Come on Gerald, let's go home," he said to the large, green toad that curled up on his palm, it's yellow eyes glinting evilly in the gloom.
Posted by Orlygg at 10:46

Email ThisBlogThis!Share to TwitterShare to FacebookShare to Pinterest
Labels: Night of the Living Dead III