Seeing the wood for the trees 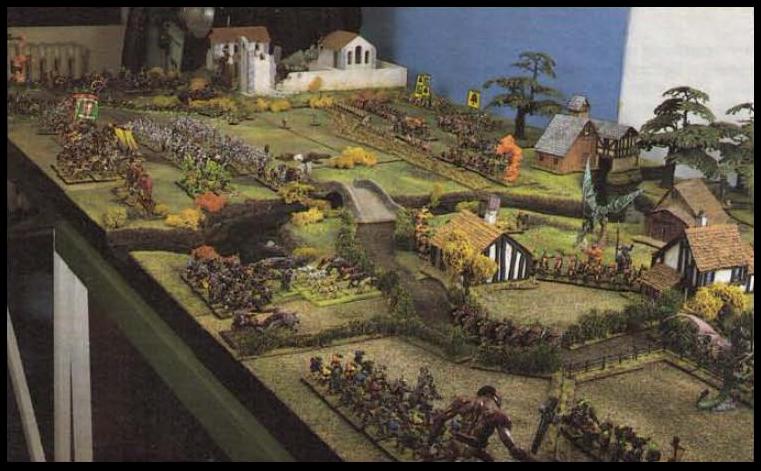 Bah! It has been a few poor weeks of Oldhammer for me. A mixture of going back to school, family weddings and other unavoidable events has meant that I have done little but undercoat my nurlglings in white, basecoat them and brush over a depth wash. A poor show indeed. And with the coming week looking no better I was in a glum place indeed yesterday, trapped as I was away from home.

I was away with the family in North Essex. I took with me (as a last minute occupier) my Warhammer Third Edition rulebook, with the intention of flicking through it during the dull moments in the hotel room. The image above always impresses me during moments like these. The famous photographs of the 'The Duke's' terrain circa 1987 can stir the soul of even the most jaded wargamer and put all of our feeble efforts to shame even with the wealth of modern modelling technology at our disposal.

It is my dream to do something like this one day, on the same scale, as I have said before. The buildings are obviously versions of the Townscape buildings, though I am not sure if these are well doctored card versions or carefully made balsawood and card replicas. Does anyone know? What ever they are, they fit together very nicely and produce a gaming space that looks like a real place. Not silly random hills, or skulls, or rivers of blood here. Just a thing of beauty.

The trees always fascinated me. I can remember looking at them back in the 1980s and wondering how the Duke made them. My father was a railway modeller and I was used to the idea of making everything from scratch because that is what he did. I was also no stranger aged 10 to the dreaded 'Railway Exhibition', where I was exposed to a great many layouts with all manner of trees.

I never saw any as great as the Duke's though.

I can also remember trying to recreate something similar to what we can see in the picture with sticks and moss from the woods. They looked great, at least to my young eyes, but my mother wasn't best pleased when she saw all the dirt and twigs that came into the house alongside my brilliant new forests.

So they went in the bin.

I have toyed with making trees of my own, and they have appeared in many of the photographs I have taken of my own models. These I constructed form my son's old milk bottle brushes, and they were simply cut to shape, sprayed black and coated in PVA. A quick dip in the flock and they were away. And here they are in this old photograph from a few years back. They are quite effective, and they are really rather cheap to make when you think about it - not that I would want to make many of them though, as they are rather dull to construct. I forgot to mention the trunks - I added greenstuff to them and modelled on some bark effects in case you were wondering.

Still, they are not a patch on the Duke's. 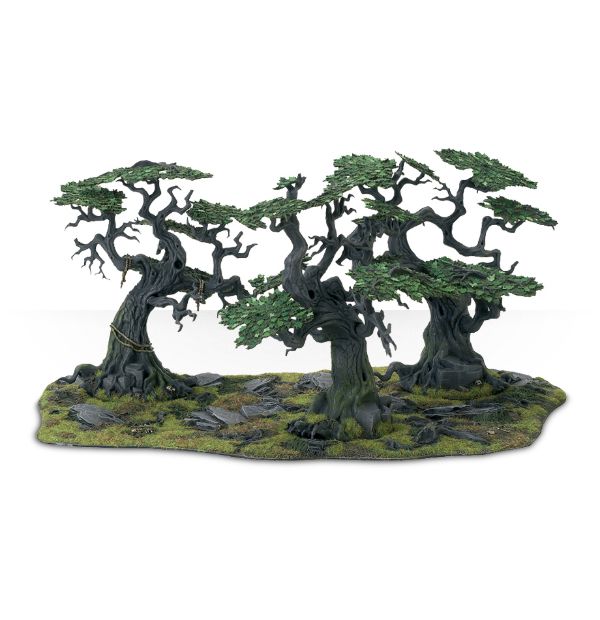 Let's not forget that Games Workshop produced their own trees too. As you can see above, it was in the familiar guise of the plastic kit. I think these were probably the last thing I ever bought from them before I went retro. They were well sculpted I suppose, with a useful base which allowed you to remove the tress if you so wished. But the leaves looked flat and naff, and if you wanted a larger patch of forest on your table you' have to fork out a fair bit of cash and paint the same three trunks a fair bit. But that's modelling I guess.

Whatever. They were okay, but they weren't a patch on the Duke's.

I was left to wonder, as I often do, of the day I'd be able to have the space and time to build a mighty table of my own as I wandered around the town we were visiting. I had a bit of time off, so I had taken the kids down from where we were staying and out to the shops. The event not being 'my family' as such, I was pleased to have a little time to myself. I noticed one of those junk/antiques shops that every old market town in England seems to have, and ushered the children inside. They are usually worth a few minutes distraction and you can occasionally find cheap books or toys that interest the children.

Catching my eye amongst the bric-a-brac was a glass display packed full of agricultural toys. Tractors, combine harvesters, cows, farmers, fences and so on. And there, alongside a giant plastic 1970s barn were the Duke's trees! 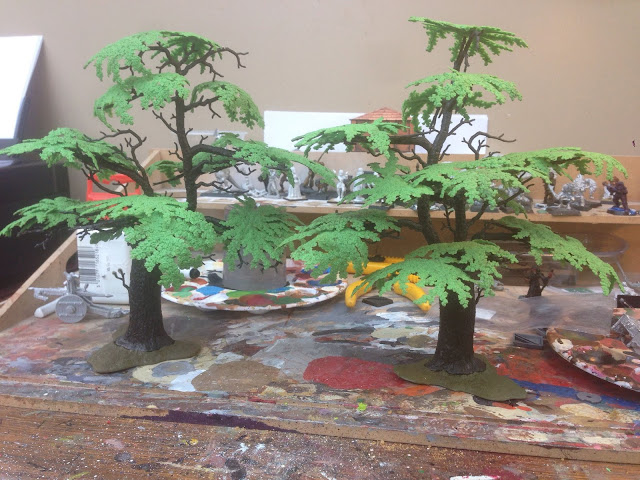 So I bought them. 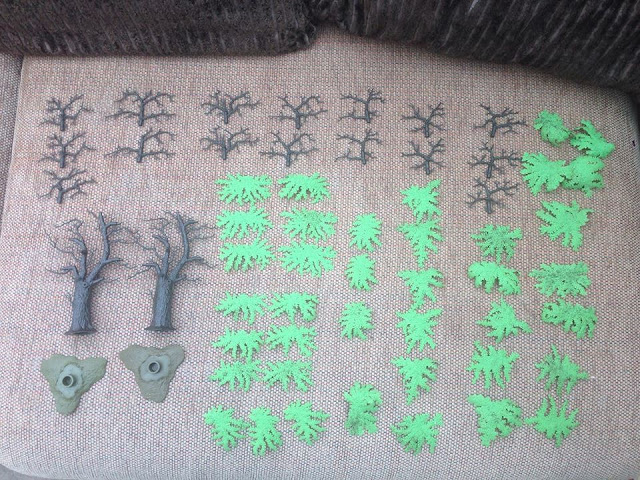 I had no idea that they were commercially available and were, in fact, toys. They were produced by Britain's and are quite collectible among fans of the brand. So collectible that the shop owner wanted £20 for each tree. A quick glance on eBay's sold listings proved the shopkeeper correct, only that seemed to be for the mint boxed versions and the two I found in the shop didn't have boxes. Nor were they complete, and one was damaged. In the end, I managed to haggle him down to £15 for the pair and very pleased was I too. The trouble was, they stank. Musty is not the word and the wife was moaning in the car all they way home today about their smell. I have since washed them up in warm water and washing up liquid and they seem more pleasant to be around.

Laying the parts out to dry, I was amazed by the detail and variation the models provide. For example, there are seven different types of branch that can be attached in various ways to the trunk and a large number of different foliage pieces. I have spread them out for you to see above you. 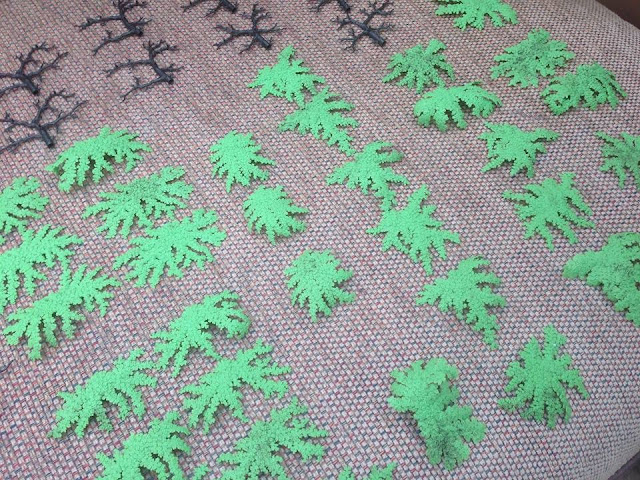 I am really pleased to have found these, especially as eBay seems a pricy place to acquire these excellent models. They are quite the best tree kit models I have ever seen, and when you consider that they were probably designed and produced in the 1970s its even more astonishing. They are brilliant. What is more, the shop keeper threw in some other bits from other Britain's trees for free when I explained to him what they were for.

It seemed, that he had been a Warhammer player back in the 1980s. A small world indeed.

Now all that I need to do is find the time to construct these properly (using glue) and get them painted to a decent standard. They are huge when put together and easily tower over my tallest models, just like an oak tree should. I heartily recommend chasing a few of these down if you have the coin. One thing bugs me though. No matter how well I put them together or how well I paint them...

They won't be as good as the Duke's.

Email ThisBlogThis!Share to TwitterShare to FacebookShare to Pinterest
Labels: Scenery