Mighty Empires or Messing Around With Tiles! 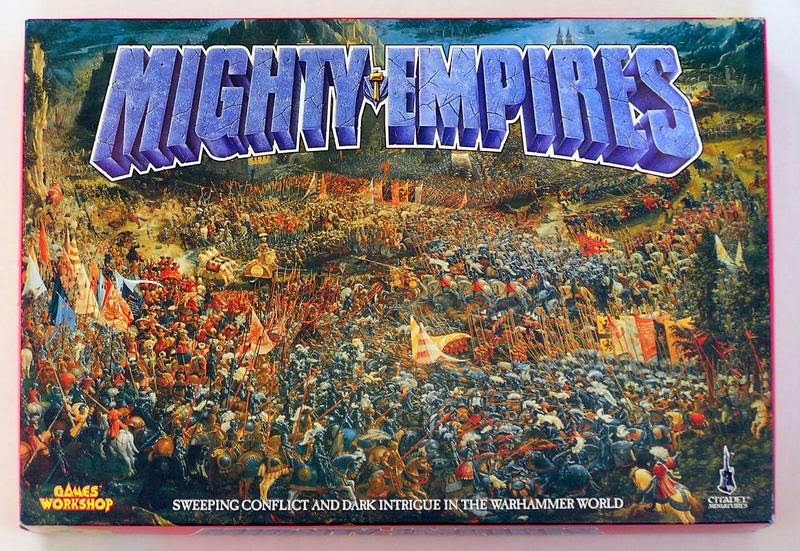 I never seem to do much actual Oldhammering in the winter months. I think its the wet, cold weather and the lack of bright natural light here in England that sends me scurrying to the sofa in the evening rather than to the workstation. My miniatures and things just collect dust, waiting (much like me) for those warmer evenings when your paint will actually dry in a reasonable amount of time and there is abundant light to aid in the photography of your work.

I am going to a Warhammer game in Nottingham next month (more on that in a later post) and will need to scrabble together about four minis for the session. Sure, I could pluck a few painted examples from the Welsh Dresser next to me, but pride drives me forwards enough to bring along something new, despite my cold fingers and the bleak evenings.

But more on that later. Today's subject is Mighty Empires. Not the re-release of a few years ago (along with the 40K version, Planetary Empires) but the original big boy from 1990. 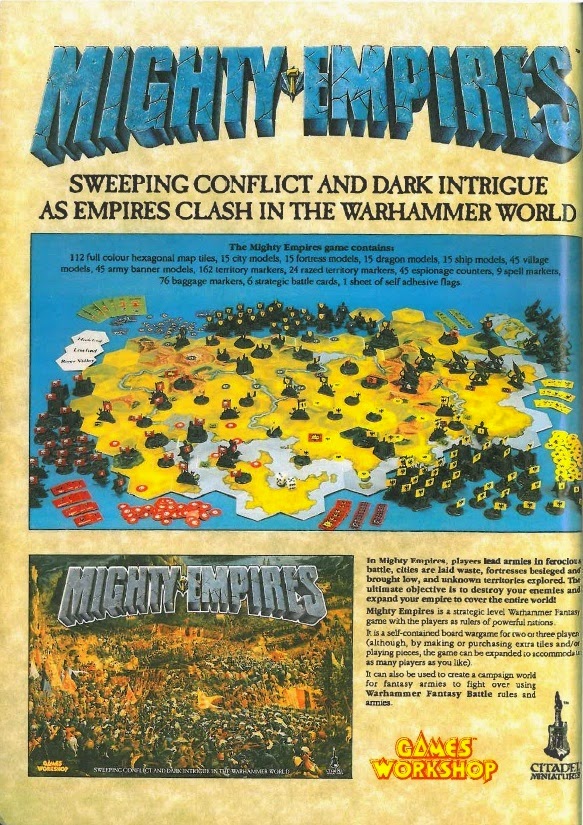 Over the years I have met a number of people who didn't realise that Mighty Empires began life as a Big Box Game. But it did, and has the curious privilege of being the final one during Bryan Ansell's tenure as Big Boss of GW, though that is still tenuous, as during this period negotiations for the sale of the company were underway and his influence over the studio was on the wane. Still, the product followed in the lines set down during the 80s period of GW in a way that later Big Box games, such as GorkaMorka, did not. By this I mean almost frustratingly wordy and complex.

Even so both games are a million miles away from the throwaway disregard surrounding the development and release of Dreadfleet.

This post begins with the classic 'box shot' (steady, Chico!) and follows on with the full colour advert for the game that was put out in the early 130s of White Dwarf. All the elements of what later gamers would recognise as Mighty Empires are present - the hexagonal tiles, the plastic miniatures of towns, cities and the like. But the game itself was very different.

At this point it is probably worth pointing out that this is the game I know next to nothing about. I never played it back in the day and to this very morning, I have never actually seen a copy of the thing with my own eyes. When it was released, my interests in Warhammer were on the wane, largely due to the obvious tone shift away from the Games Workshop that I knew, though the looming influence of the Commodore Amiga was also playing a part. So this post is a bit of the research project for me.

So then, in a nutshell, what was the original Mighty Empires all about?

Like its younger cousin, the basic world map is put together using the hexagonal times supplied with the game. Many of these tiles represent different geographical features - from mountains, to rivers to coastlines. Players then begin the game in ownership of a few tiles of this game world, upon which they can create their capital cities and so on. Then, using a points system, the players can generate 'banners' or to put it another way, actual armies with which to do the actual fighting with. As with all strategy games, there are advantages and disadvantages to generating larger and smaller (in points terms) banners. The players then take turns to move these banners around the map, seizing territory, triggering random events, discovering new settlements and eventually, the other players.  Unlike the rather simplistic 'fight everyone' view of more modern Warhammer games, diplomacy seems just as powerful as aggression here, as does subterfuge - with plenty of rules for spies and assassins to spice things up!

Despite not really knowing anything about the game, one thing always stuck in my mind. The artwork chosen to grace the box itself. I have spoken to a number of people who had brushed off this image as just another Games Workshop battle scene, only one without any magic. But in truth, the artwork chosen isn't from GW at all and remains, as far as I can tell, the only historical piece of art ever used on the GW product. You see the original painting is by a chap called Albrecht Altdorfer (and who could create a more Warhammery name than that?!) and is said to represent the Battle of Alexander at Issus.

Here is a better look... 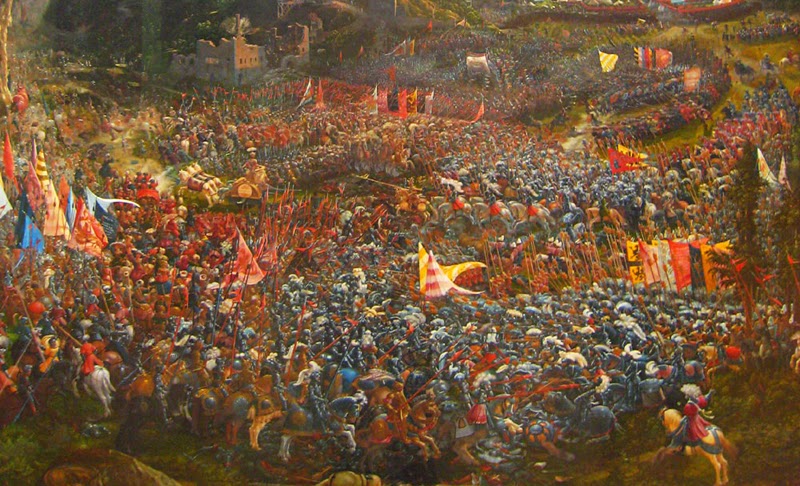 Now thankfully there was a wordy (as was the fashion back then) article about the game published in White Dwarf 132 (I think) and was scribed by the very reliable Rick Priestley. It goes on to give quite a lot of detail about the thought-processes behind the game and a little of the development cycle. Rather than quote from the text and produce some lengthy waffle about what was written, I present the extracts below. 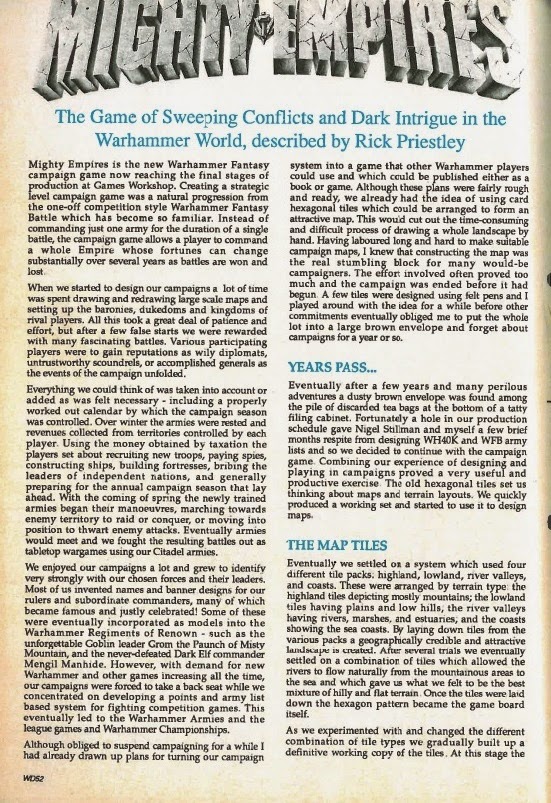 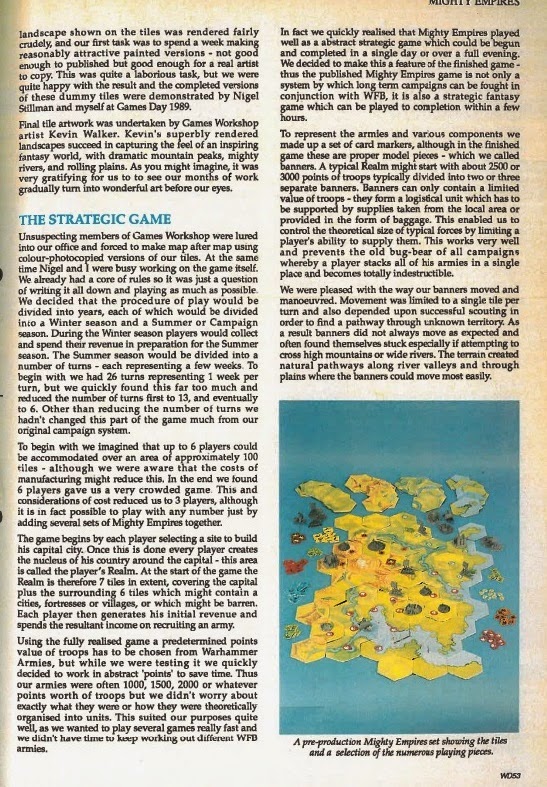 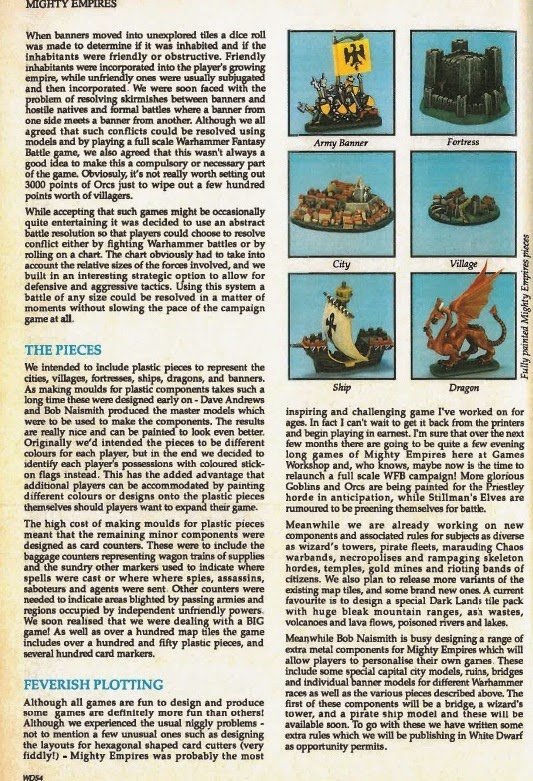 Now let me stop you there, because this page gives us a few painted example of some of the original models that were produced for the game. As I understand it there were a large number of plastic components produced for the boxed game and GW later produced some additional pieces in metal. Which is pretty much what they did with the later 21 Century version of the game. Here we can see some of those initial miniatures painted up by the then 'Eavy Metal team with some fairly naturalistic colour tones really. I am particularly impressed with the painting on the City and it makes me want to book a family holiday there!

As with many games of this era, additional rules and bits and bobs were included in GW to supplement the game you just bought. Mighty Empires had a few of these included over the next few issues of the magazine and I present another one of those here for study as it gives us a further indication about the extra models that the Citadel forges would soon be churning out. Also of interest are the extensive rules concerning the Wizard's Tower, which provide a wealth of interesting old school ideas for retro-minded gamers everywhere. 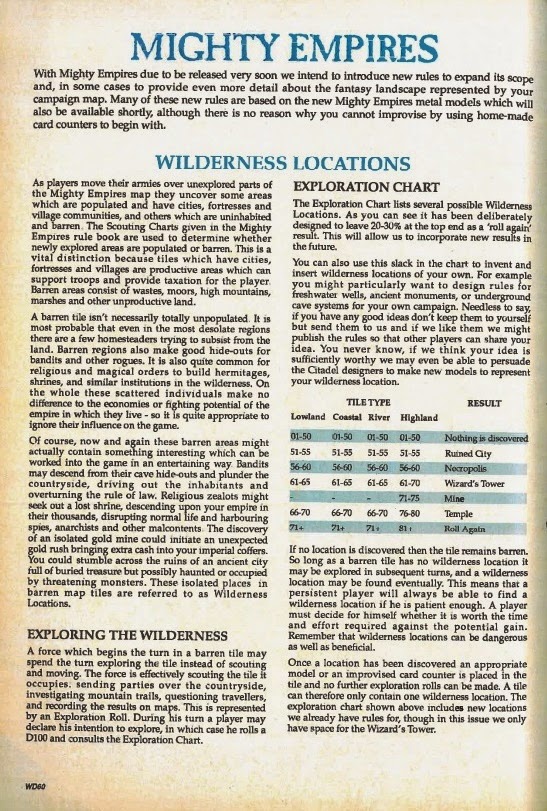 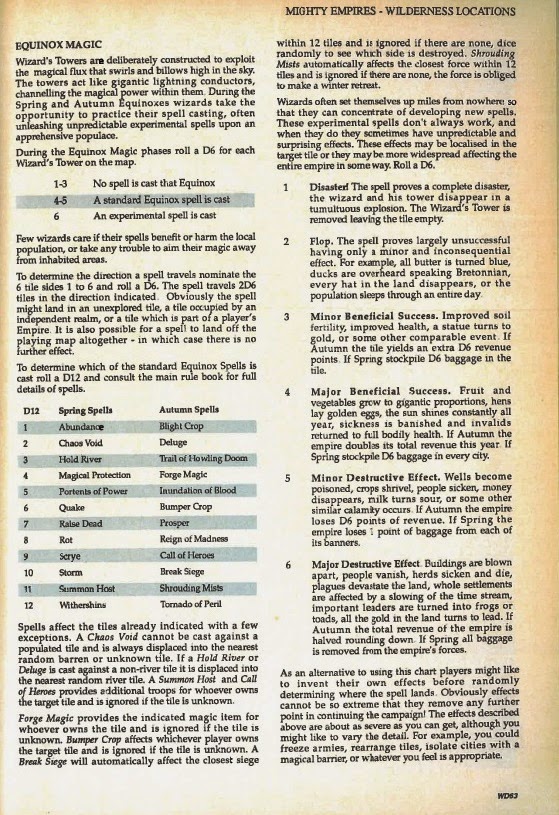 To conclude, the original edition of Might Empires looks to be something I would one day like to get my hands on, though this is really for the completist in me. My own preferred style of gaming (and one that I feel isn't really that well understood by many people who approach Oldhammer style scenarios) is the narrative game. I cannot see Mighty Empires being all that useful for encouraging or supporting these small scale skirmishes but I am sure that its sweeping scale could provide different types of games on an epic scale.

Having a quick look at the markets, its seems that this Big Box game is slightly higher in price than games such as Bloodbowl or Dark Future from the same era. The average seems to be about £80. The price tag suggests that there is style quite a bit of interest in this version of the game out there, though due to the sheer number of parts presented in the game, finding one that is 100% complete is probably a challenge.

Well, what are your thoughts on this game? Did you own it back in the day? Do you still own it? Was, or is,Mighty Empires a game worth playing? If you have an opinion - please share!