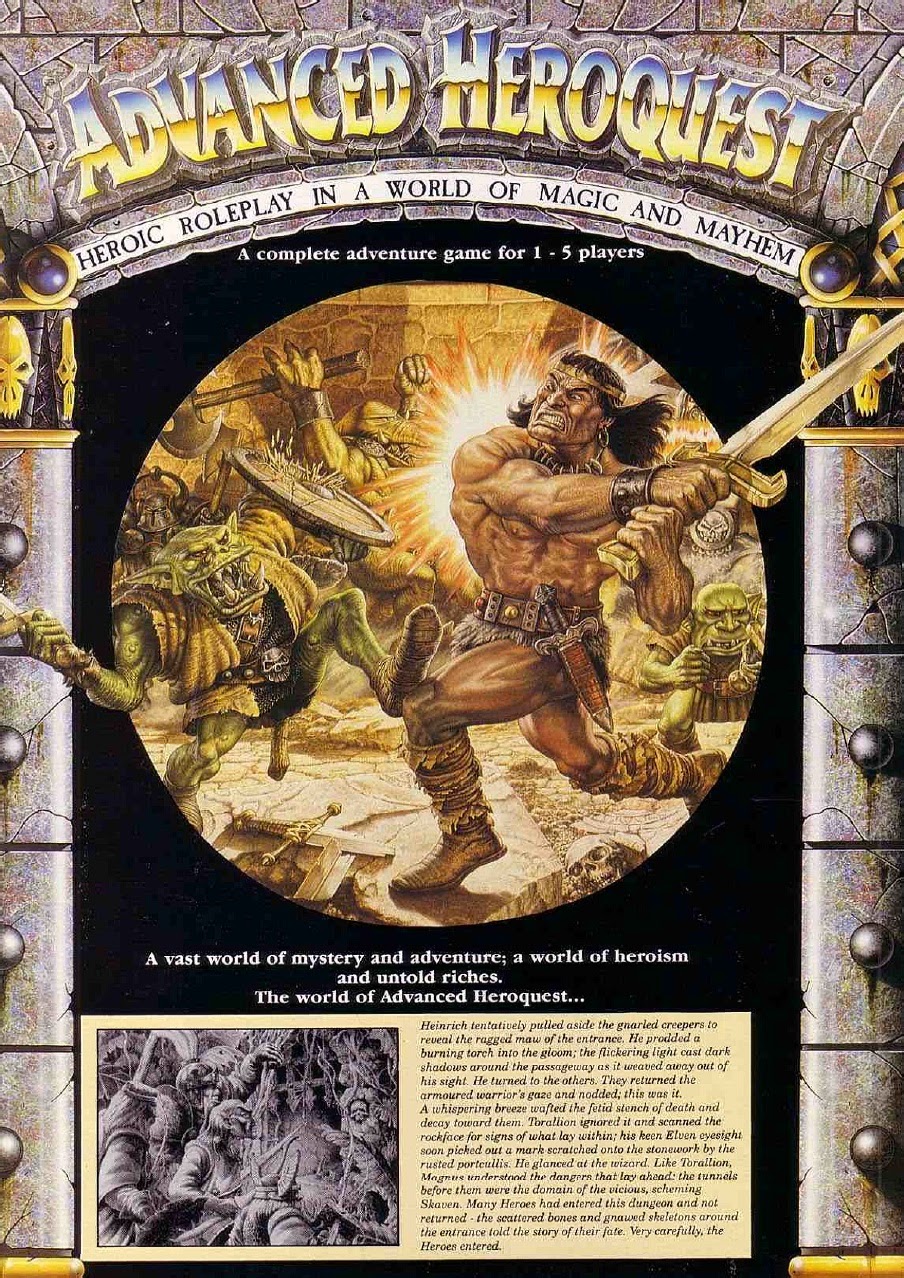 Advanced Heroquest. What a game! Even after all of these years, it is still a firm favourite of mine for many reasons. The miniatures, the playing pieces, the ruleset, the background and not to mention the numerable scenarios published in WD over the following few years. If memory serves, I only played it a handful of times (with my stepbrothers) but those few hours were enough to sear a firm attachment to the game that remains to this day. Sadly, despite many efforts, I have yet to get my hands on a decent copy of the game and enjoy it all the more as part of the Oldhammer Scene.

What follows is a look at the material published in WD 118 in support of the games release. As a cursory glance will show, there was a great deal common with this game with its more famous sibling. The four heroes (barbarian, elf, dwarf and wizard), a playing surface that allows for almost innumerable different dungeons and a series of adventures in the grim world of perilous adventure! In fact, the only thing that Advanced Heroquest lacked was the plastic furniture! 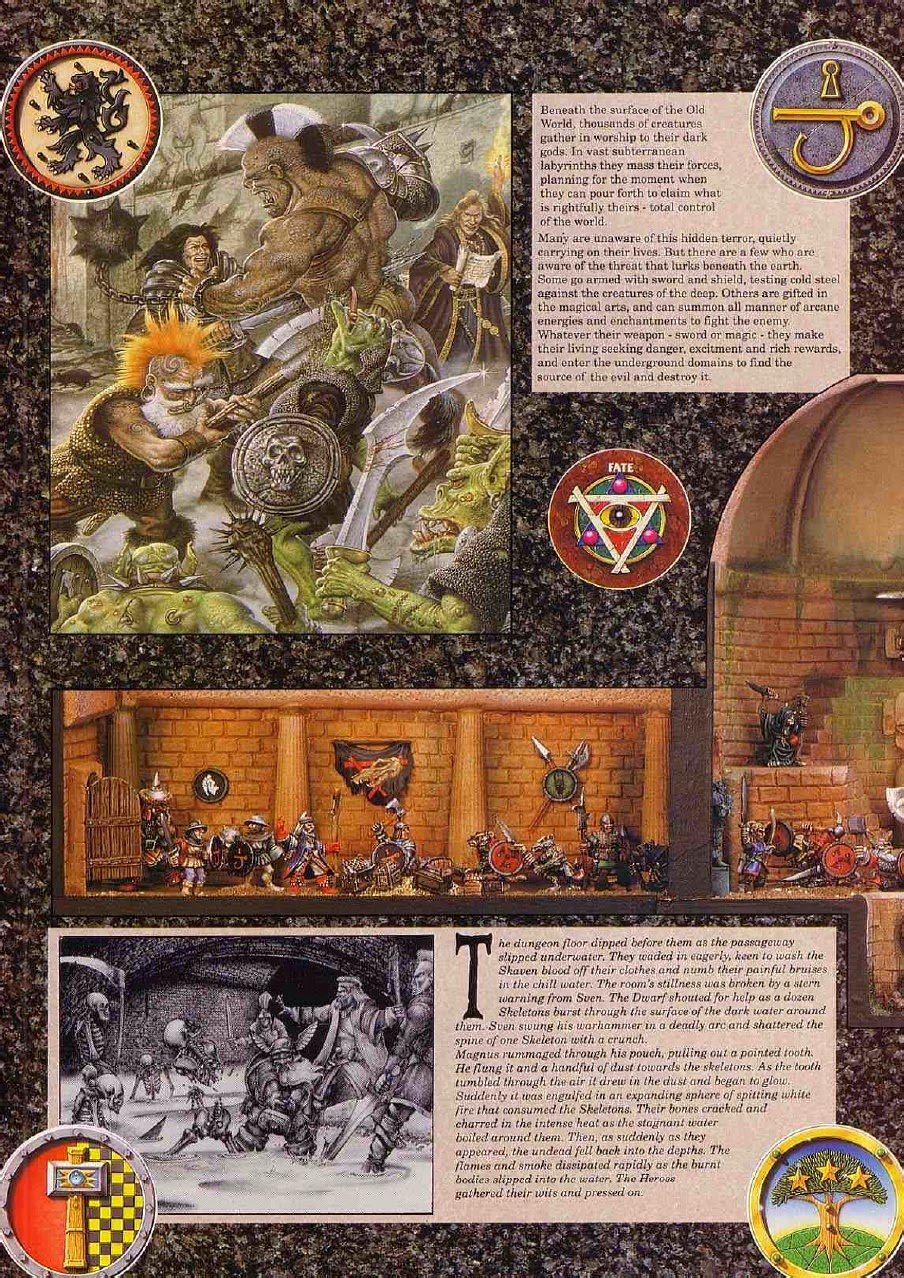 The game looks more adult than Heroquest. And this is certainly true when you start delving into the background material, which has a lot more in common with WFRP than WFB. A quick scan through the artwork and narrative presented in this article shows are far darker tone to the game. As with many products released at this time, many of the pieces of associated artwork came from the massive stockpile of images that GW had at its disposal. Gary Chalk's shield designs and the beautiful pen and ink drawings are new though, and look just as magnificent as we have come to expect. In my book, it was this high quality art alongside high quality miniatures that sold these sets and still makes us love them today. 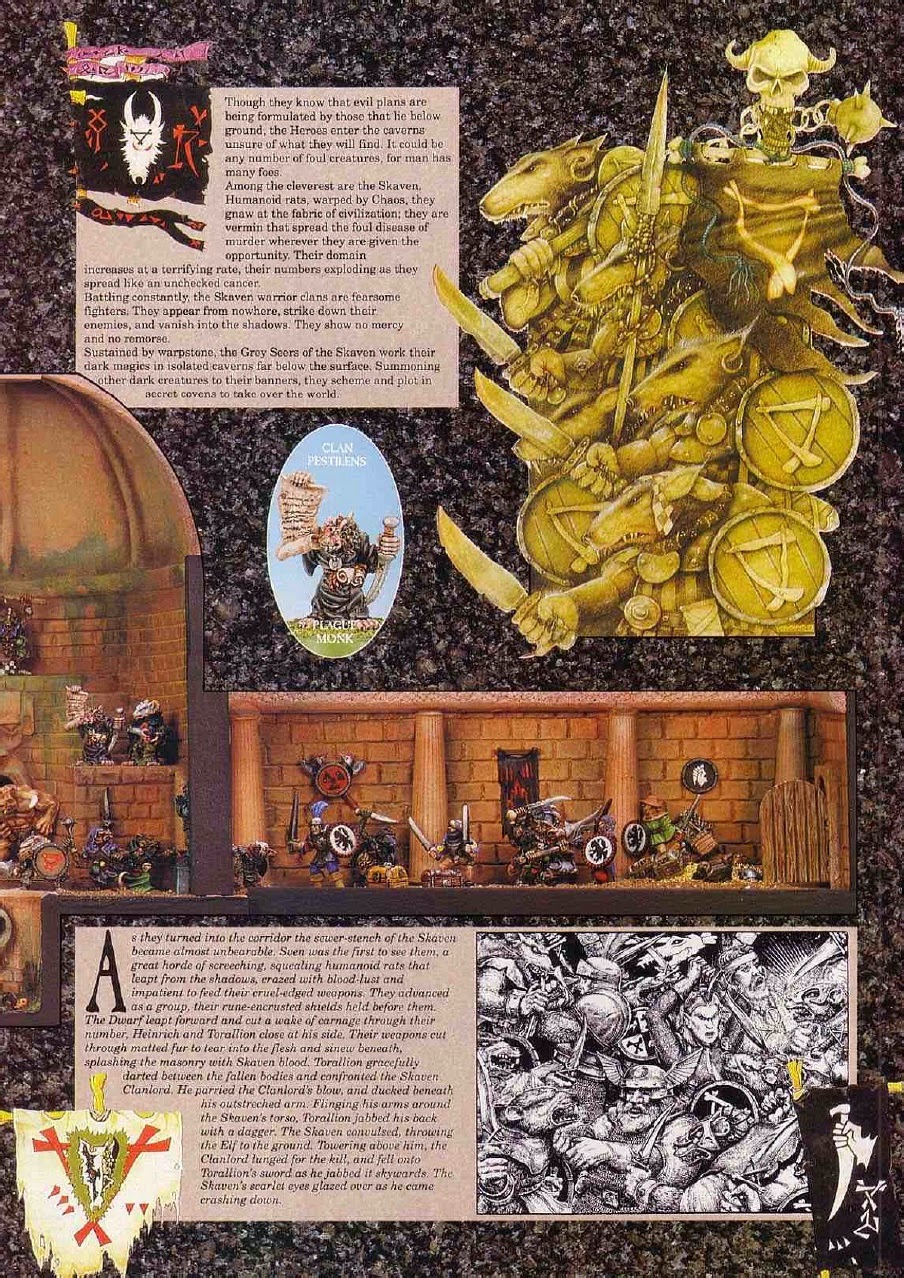 Many of you will recognise the famous Advanced Heroquest diorama that was put together, if memory serves, by Ivan Bartlett. It makes great use of the wide range of metal and plastic Citadel miniatures available at the time. As each model is a single sculpt and not part of a kit, apart from the few plastic models used, the diorama has an very different feel than many we see today, which are more a journey of familiarity rather than an adventure of new discoveries. One of thing worth noting on this page is Wayne England's crayon illustration of skaven to left. Very evocative that piece of art! 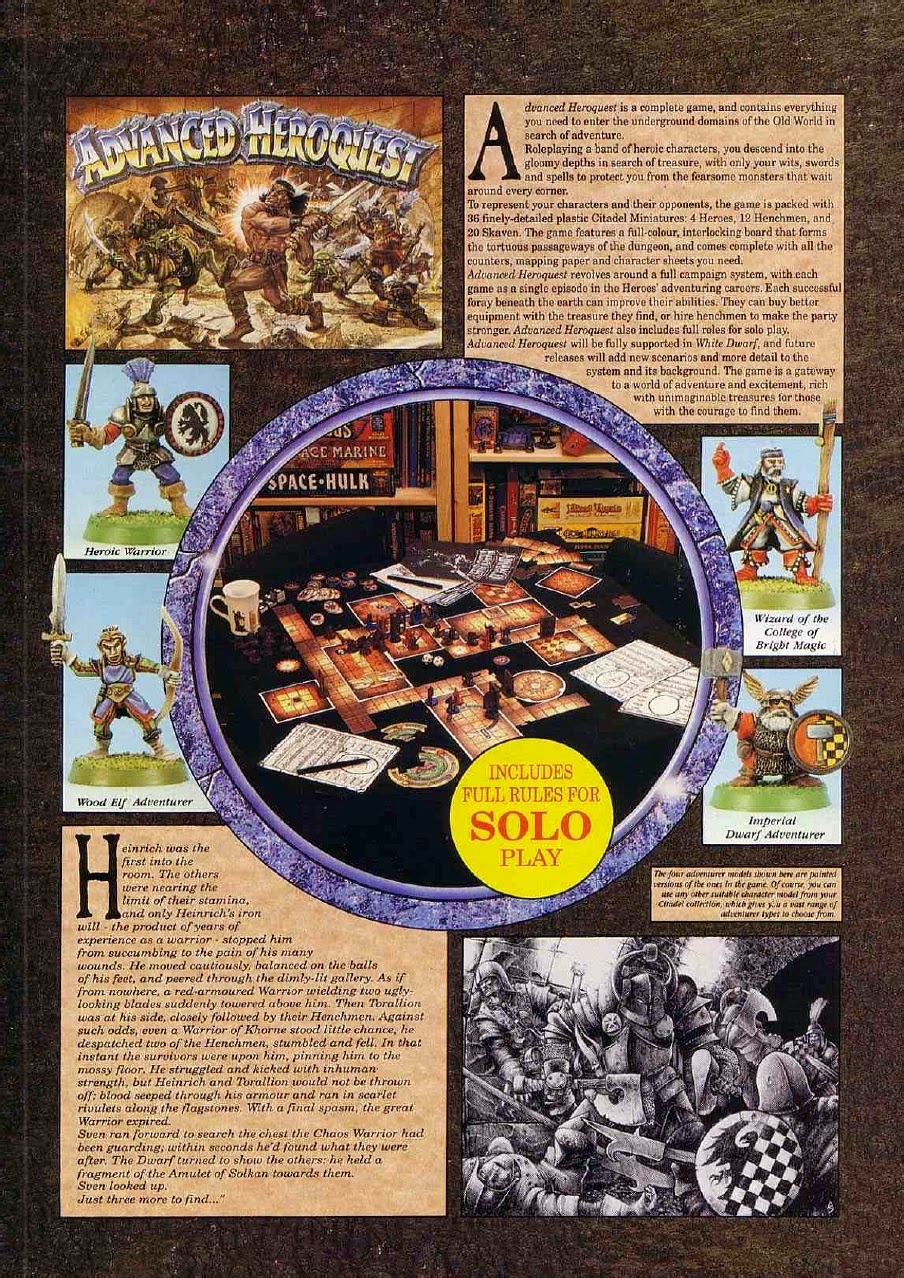 A big draw to games like Advanced Heroquest were the Solo Rules, advertised here with a giant yellow circle. As many of us gamers were still quite young, or lived miles away from other enthusiasts, rules like this made it possible to play out these games alone in the safety of your bedroom. I can recall many happy hours inventing my own dungeons before laying them out and gaming away using the original Heroquest set. 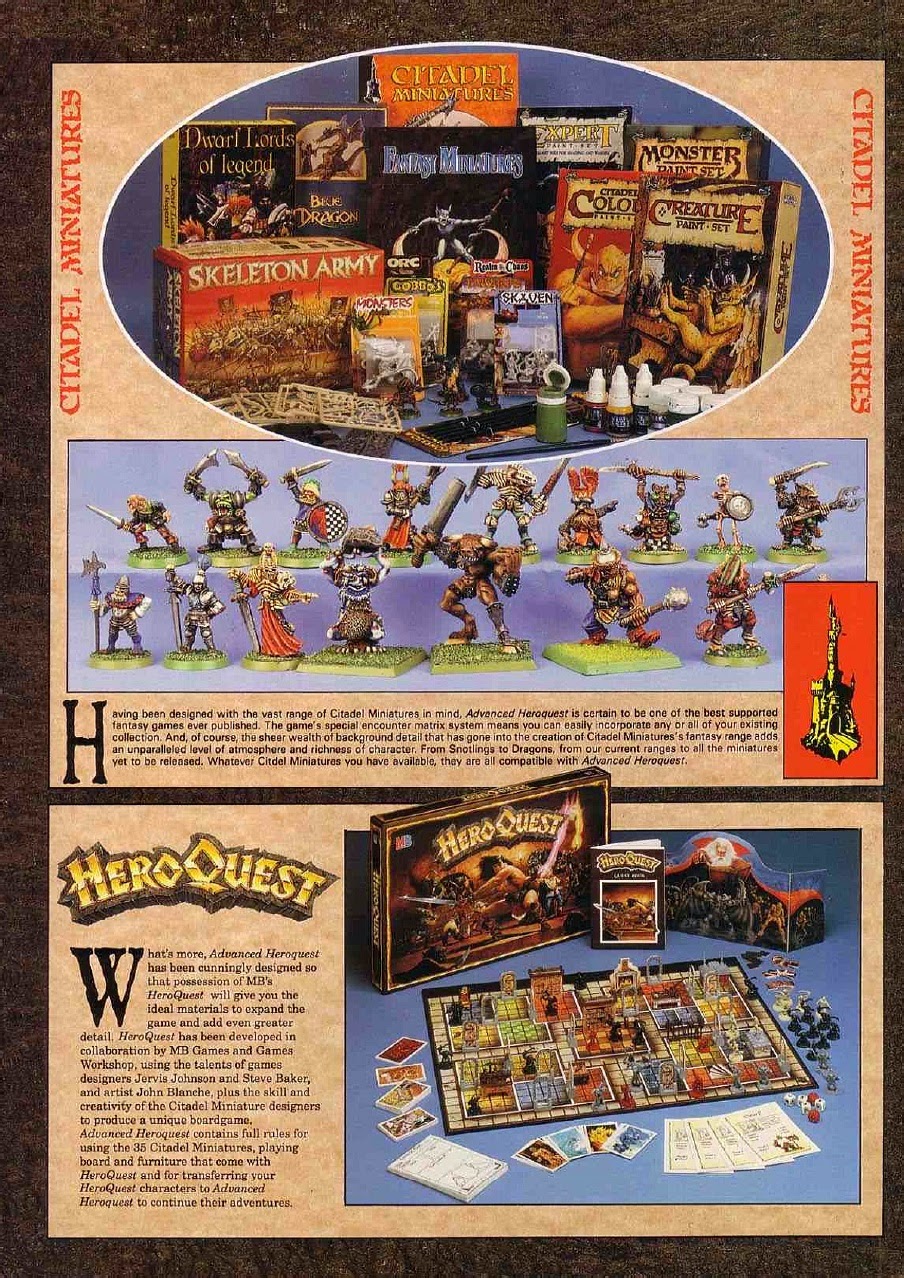 As with many products released in the late '80s, Advanced Heroquest was fully compatible with many of the models produced by GW. In fact, expanding the game with your own collection was positively encouraged by the game, and the cardboard cut outs of monsters and daemons secreted in the box only encouraged you to chase down the models and paint them for real.

Super keen eyed readers may well spot a familiar miniature in the selection above. It was part of my previous post. Can you spot which miniature I am referring too?