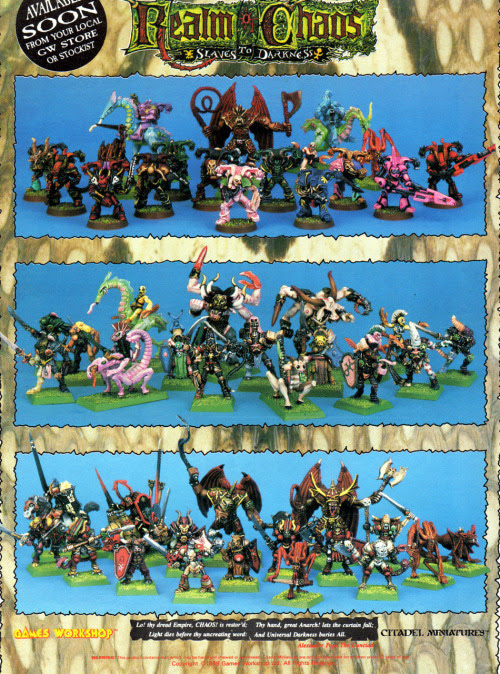 As many of you know, there are major plans afoot which should see some kind of Old School event at the Foundry in Nottingham this summer (most likely late August). One of the components of this would be a celebration of Slaves to Darkness' 25th anniversary. Many in the community have suggested using the rules in the book to create Khorne and Slaaneshi warbands, collecting the original models and the pitting the forces against each other...

And I must say, its an excellent idea! Having a lot of experience playing with the warbands rules, I have put myself forwards as the organiser/GM overseeing this part of the event. I have two fully painted warbands to bring to the table already!

One thing that such a contest can never, ever be is a tournament!

So don' t expect one!

The rules for warbands were designed as a miniature RPG to be played between friends. The concept is one of the futility and damnation of following a chaos god. The chances of success are remote and attributes can have a positive or negative effect on your forces...

So those of a nervous 'armylist' disposition you may want to look away now because there is NO ARMYLIST to pick your forces from! Just a long series of d100 and d1000 charts. And these can be as random or as deliberate as you like. If you want, you can roll off on the charts and create your force as the Chaos Gods intended, or you can be more selective, picking the forces you already have in your possession or that your are most interested in fielding.

Can I just remind you, that in RoC there is NO BALANCE. It is very easy to create an extremely powerful force, just as it is easy to produce a force that wouldn't last twenty minutes against a force of lazy, shortsighted hobbits.

So some kind of order is going to have to be introduced so that all those involved have a great time collecting, painting, and ultimately, gaming with Slaves to Darkness miniatures and rules. Let's start with warband composition.

1. Creating your Champion of Chaos

Your very first job is to roll off (or pick) a race for your Champion. A quick look at the STARTING PROFILE TABLE just throws up the number of options that you have; everything from a chaos dwarf to a zoat.

2. Once that is done (and you have a dwarf, human or dark elf) you need to roll off your starting stats. In our experience, standard profiles don't make good champions. They die far too quickly and just do not 'feel' like the champions that they should be. I recommend a level 10 or level 15 hero or wizard as good starting point, so don't bother going about rolling for one (unless you want to, that is...) 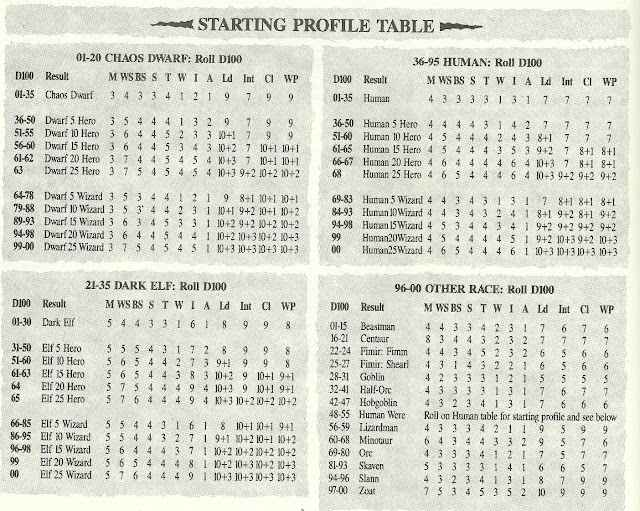 3) Next up, you will need to give your new character a name and background. Who is he, she or it and what are they doing roaming the Chaos Wastes. Their first reward is automatic (chaos armour for Khorne champions and a Willpower increase for followers of Slaanesh) however, I feel you should be able to pick an additional reward at this point, either a chaos steed or a chaos weapon (the nature of the weapon to be rolled off on the day) Additionally, you will need to establish your first attribute. If you are unsure what I mean by this, have a look at the table below... 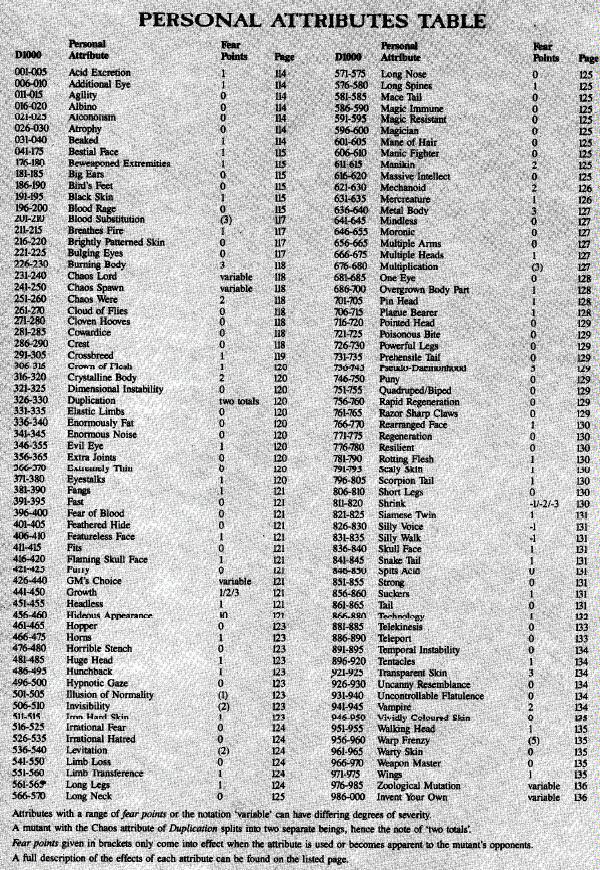 Yes, there are a very large number of attributes in RoC. Some are merely cosmetic and make challenging conversion projects, while others have a positive or negative effect on a champion. This system is obviously very easy to abuse and its simple to just pick the most useful and powerful attributes to 'beef up' your champion. This is, however, quite the opposite to the spirit of the game, isn't it? I feel that those of us interested in creating and gaming with these warbands should pick one negative (or cosmetic) and one positive (improves stats) attribute. I feel that this is the most sensible thing to do and should bring some interesting flavours to the games.

4) Finally, you need to create your retinue. This, in my opinion, is the most exciting part of the game. Rolling off is totally random, and the way I like to do it as it takes your collecting into a strange and previously not expected direction, though just picking the troops you have available to you is also acceptable. Again, this system is open to abuse (lets all just pick a dragon shall we..?). I feel that a little direction will help here so;

This will give just a starting point for your band. Most likely, you will have about 10 or so models now and it should be pretty simple to collect and paint those models between now and the summer when Oldhammer day takes place. All you have to do is share your warband as you build it. We would all love to see them develop. 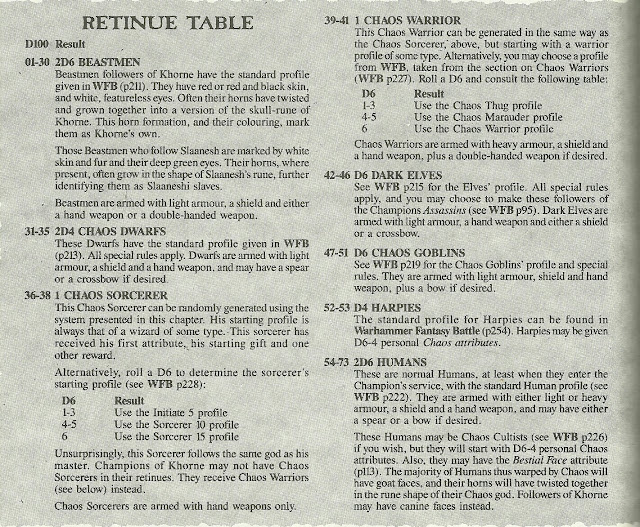 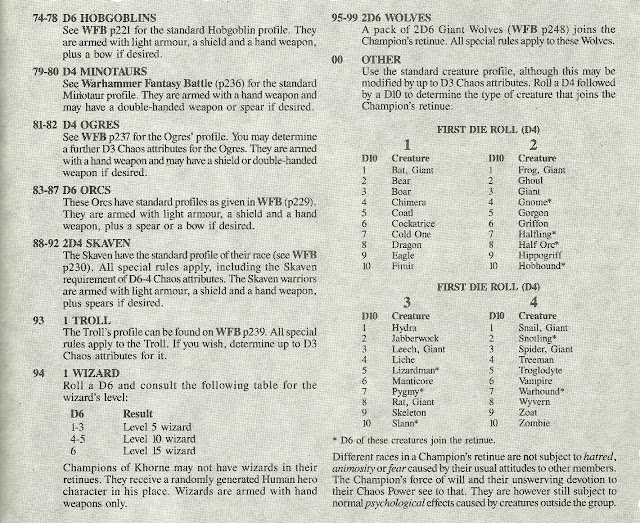 This will give just a starting point for your band. Most likely, you will have about 20 or so models now and it should be pretty simple to collect and paint those models between now and the summer when Oldhammer day takes place. All you have to do is share your warband as you build it. We would all love to see them develop.

Right, let me have a go shall we... If you want to take part (and your using dice rolls) it would be interesting to see what players rolled off. Here's mine...

So I need 8 thugs, 8 beastmen, a chaos warrior and the champion model itself. I'll avoid taking a steed and take the gamble on a chaos weapon on the day. Well, I have all of these models and they number less than 20 models to boot!

On the day, simply turn up with your warband and stats (more about that later) and we will organise some games. Either one on one encounters, or something on a larger scale (which I would prefer) with all the Khorne warbands on one side of the table and all the Slaaneshi ones on the other. A simple scenario (with private objectives for each player) and a battle to wipe the other faction off the board.

Does that sound like something you'd like to take part in? Well, let us know - it would be nice to get some dialogue going between players, share the development and histories of our champions (perhaps even create a few early rivalries) and exchange details and resources.

Who's up for it then?