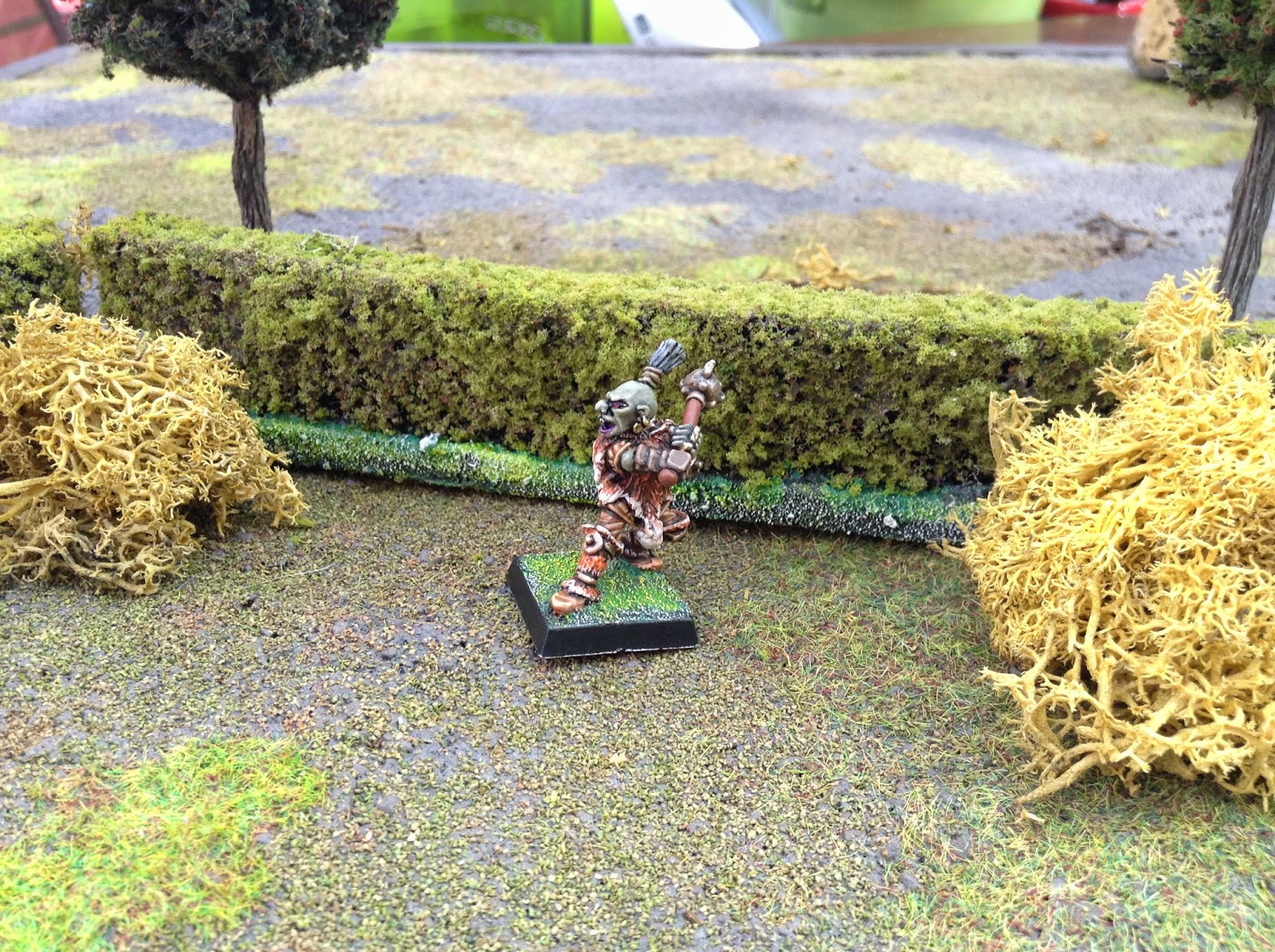 I am back at work now and I no longer feel like I have Slaanesh's right stiletto stabbing me in the throat every time that I swallow. I am sitting at my desk in my 'Oldhammer Area' typing this with a pile of unpainted lead and a load of wrapped up trades that I STILL haven't got to the post office! Apologies if you are waiting. I am a bit crap!

I have just finished tinkering with the next miniature in the Warhammer Bestiary project though, and have produced a half-orc this time. Yes, I have spelled that correctly, a half-orc. Things such as they existed back in the day, and the background was very clear about their origins. Half-orcs were cross breeds between humans and orcs, goblins or hobgoblins. Quite how 'the breeding' was actually done is left to the reader's imagination but what really interested me about their background was not the hint of rape and woman stealing (presumably by the goblinoids, because it would be a desperate man indeed who'd plot to bonk a goblin surely?) but the fact that evil half-orcs (yes, you can choose their alignment in WFB3) can lead goblin units, even armies but, and this is a great but (particularly for colourful narrative) they can also lead human units.

Well how about that for an interesting gaming scenario? A half-orc leading human troops against a goblinoid threat!

I had one half-orc model in my collection and it was this rather dynamic looking chap dressed in furs. After stripping him down and releasing him from his twenty year sentence of enamel paint I promptly set to work on him. 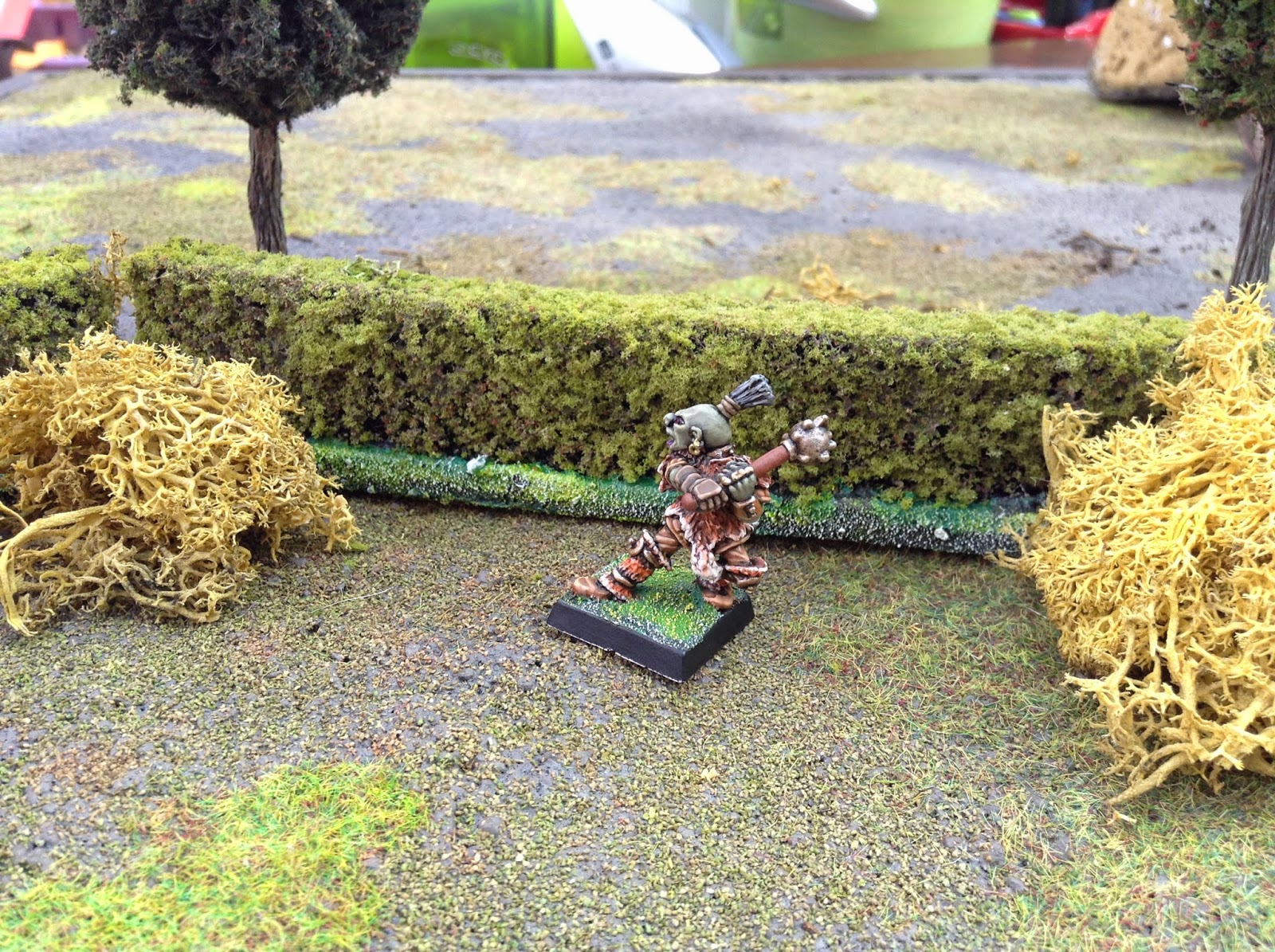 Not only does this model have a great pose, its also very interestingly attired. Padded (almost Native American style) armour with animal skins over the top. I assumed that they may have been intended to be wolf pelts but I interpreted them as fox fur and had an rewarding time trying to do justice to the orange tones required. He has a primitive, survivalist feel to him and there was something about fox fur that rang a creative bell.

He was painted using my usual method. White undercoat, basecoat, homemade ink wash and then layering up to the highlight for each of the base colours. The mace head was achieved by good old ink wash and drybrush. Originally, I used drybrushing to bring out the details on the fur by found the finished results rather flat and boring. Instead, it tried a more 'painterly' style and dabbed the colour on here and their (using fur as a reference) before drawing the colour out with ink washes, again dabbed on. I left the edges and tail of the skin pretty much white to help give the edge some definition. 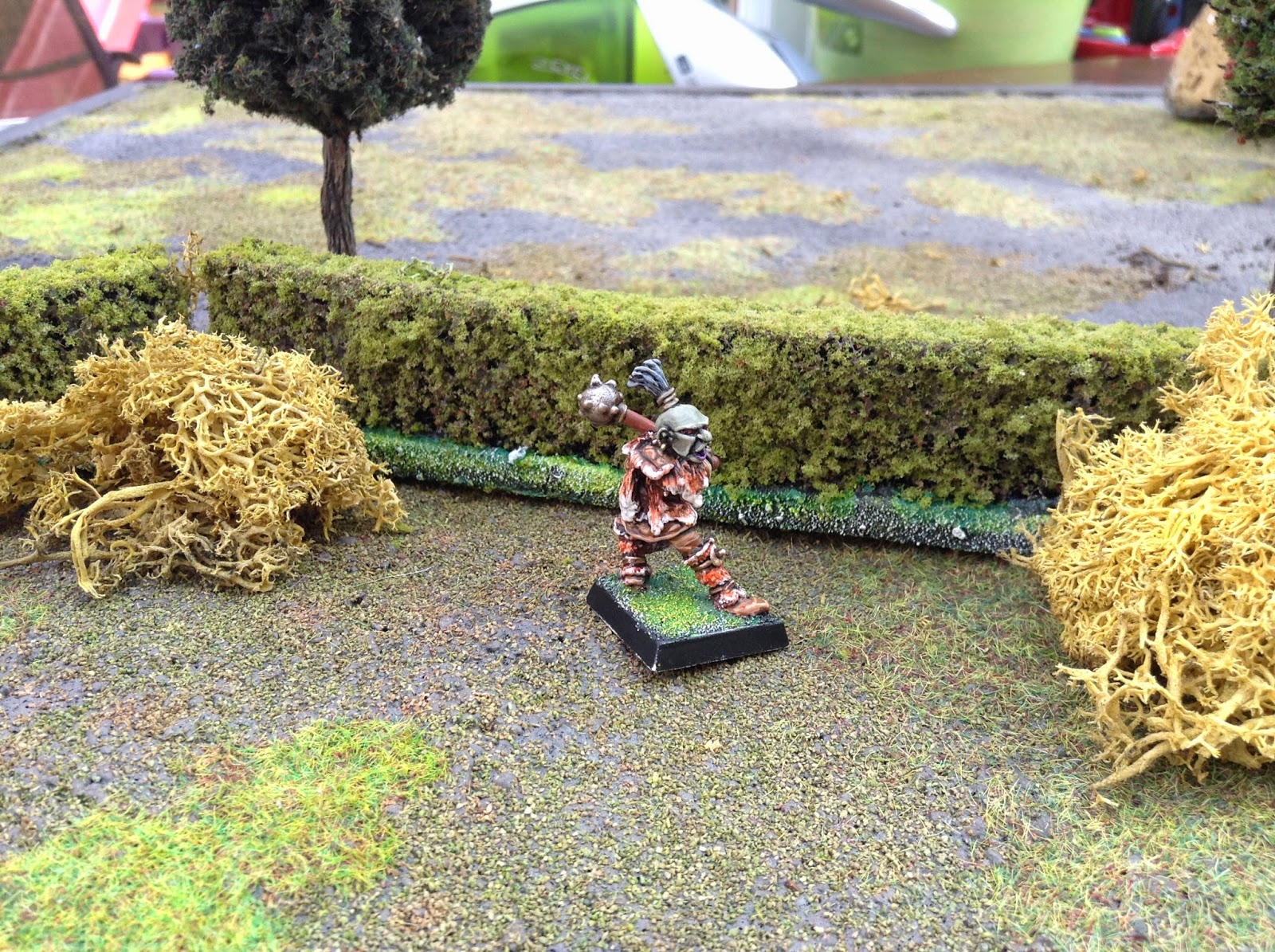 Finishing up with the flesh I opted for a much darker green, created by mixing in dark fleshy brown (he is after all a human/orc mix) and then highlighting up with Bleached Bone being added to the mix. Red eyes and a purple lip finished off the 'look' suitable for one of orcish ancestry.

I really enjoyed this one, though he was in all fairness probably the hardest paint job I have had to do so far. I did however learn an interesting fact about hair on goblinoids. There has long been this debate about whether or not orcs and goblins should have hair. These days its a resounding NO but the background in WFB3 is clear. Any goblinoid with hair is in fact a half-orc (the term is a blanket that covers goblins, orcs and hobgoblins without distinctions) so those early gobbos with mohicans and what not are really just crossbreeds. Obviously, post 1992 when the background was geared towards a younger market any such allusion to rape was promptly removed. So half-orcs died out as quickly as goblin hair.

Anyway, onwards and upwards tonight. Another goblinoid next - a hobgoblin. Now where did I leave that orange?