The Sins of a Citadel Collector: Dettol Jars!

I have a guilty secret.

Something the wife knows nothing about.

I wonder if you have such a secret too?

I am a Citadel Collector and I have gone three days since I last went on eBay.

Despite putting myself on an online bidding ban, I still seem to be receiving packages in the post. How could such a thing be possible? I am finding myself having to intercept the postman with a 'anything for Number 10?' on the way to work to avoid the Power That Be finding out about my guilty lead based secrets. Truth be told, I now have a huge amount of lead and I am beginning to become confused about what exactly I have. This tells me I need to stop collecting and start sorting and painting.

Secondly, I have another shameful secret tucked away in the kitchen well away from the Wife's eyes. Three Chinese Takeaway plastic containers full of Dettol soaking miniatures. Well, there were three, now there are two, as I set about cleaning the contents of one of these this morning. After an hour of frantic washing up liquid lubricated toothbrush scrubbing, I was left with this collection drying on the kitchen work top. 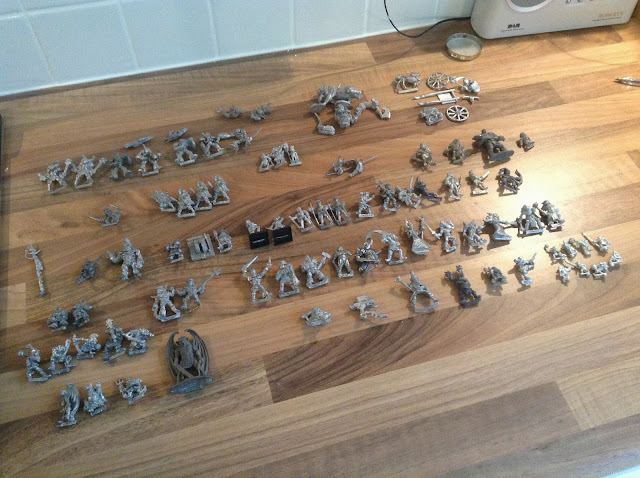 What can you make out observant reader? What surprised me was the stuff I had forgotten I had. Including a dragon ogre and an early 80s Balrog or Balgorg as they were known in the Warhammer Mythos.Some of these models have been in the mix for over a year, and a number of these models have a sticky feel to them. fresh Dettol will have to be the order of the day here, or the fabled Fairy Power Spray which I have never found on the shelves of my local supermarket.

But cleaning woes beside, finding this lot amongst the brown sludge makes me wonder what treasures I have forgotten in the other two containers!

Anyone else guilty of such shameful secrets I wonder?