One thing I have always been keen to do here at Realm of Chaos 80s is collect good quality old school Citadel coverage and present it to you readers. As the Oldhammer Community has grown, its has become rather scattered and spread out. There is no central point, though the Facebook Group and the Forum act as hubs of sorts. Due to this, I feel it is important to share and support the sterling work done by other old school fans that doesn't, perhaps, get the coverage that it should. When I find a good article, I share it! Simple as that! I also like to promote the blogs of other enthusiasts world wide.

Well today I have had the pleasure of reading two excellent interviews from two different blogs. I present extracts from those interviews here, with links to the blogs so you can continue your reading pleasure if you so wish. As I would imagine you will want to. Or, indeed, you could just cease to read my waffle and scroll down to reach the handy links as read the articles as they were intended.

Either way, its win win for me. Of course, if you have an article or blog that you would like promoting then just drop me an email and I will see what I can do.

Just make sure that you click on the 'followers' options so that the two author's readership grows as they deserve! I WILL be checking too! (:

Anyway, over to axiom and his interview with Citadel sculptor, Bob Naismith.


axiom: It's probably fair to say that you’ve had a fairly decent innings in the sculpting game! How did you start off sculpting figures and begin in the industry?

BN: Well I did conversions and painted figs (airfix etc) as a teenager (who didn’t?) and started painting wargames figs when I was about 17. This was through an outfit in called Wargames Publications Scotland. They asked me to try my hand at making masters. A samurai I recall. They liked it and I liked getting paid so…

BN: So I made figures for WPS for a very short period then disappeared off to art school. When I finished I started a company (Naismith Design) with a couple of friends from WPS – we made quite a lot of 28 and 15mm historical ranges and I also made hundreds of naval models for Navwar – who were also in on the Naismith Design enterprise. After I think about three or four years I ended up chatting to Bryan Ansell and the result was that I started work for Citadel in 1981 I think.


axiom: You contributed to a significant number of Citadel fantasy ranges; Fighter, the licensed Advanced Dungeons & Dragons range (I counted over 50 figures in that range alone) and the iconic Fantasy Dark Elves. Could you tell us a little bit about your contributions to these ranges and how you got a reputation for sculpting evil Elves?

BN: Well in those days making model soldiers was a very fast and furious game. Citadel would publish several codes of miniatures per month – sometimes 150+ masters. Even with a team of sculptors that was quite hard to achieve. The main codes like fighters, wizards etc was a staple and we would usually end up specialising. I had a dabble at most of them. Every now and then one sculptors style would ‘fit’ with a specific code – the dark elves seemed to do that for me and I made quite a few. I still have an army of them if anyone wants to make me an offer!


The dark elf look was derived from art by John Blanche and Tony Ackland for the most part but once the look was set it was easy to go forward without it.

On the other ranges – I was for a time in charge of the other sculptors (apologies guys!) and during this time I was responsible for making sure that Bryan Ansell had as many of the codes that he needed each month to satisfy the sales teams. The upshot of this was that I had to generate extra models from existing used masters (conversions) and the codes show that – ie same body/different head etc etc. 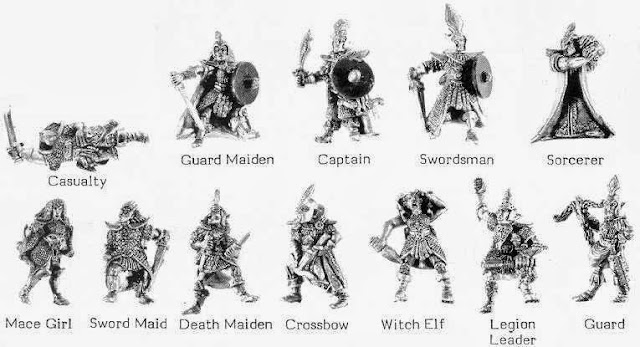 Whoah! Hold your horses... If you want to hear more from Bob then I am afraid you are going to have to visit axiom's blog, Magpie and Old Lead. There you can discover all about Bob's views on Rogue Trader, the plastic technologies pioneered by Citadel and what Bob did after he left Citadel.

Oh, and while you are there, don't forget to follow axiom's blog as it deserves a much wider readership. I have just joined his site so I do hope you follow my example.

The second of the interviews I have uncovered deals with the double Slayer Sword winning mega-painter, David Soper. David was interviewed by Kaleb Hordes, author of Oldhammer in the New World. I have written about this blog before as Kaleb hopes his site to become a focal point for the Oldhammer Movement in the USA. Back when I first wrote about his blog, he had no follower's gadget but thankfully kaleb has seen the error of his ways and included one, so you to can follow his output in the future.

Anyway, here is a taster of what you will get on his blog.


[OITNW]: From reading your blog, you left the hobby for a while and rediscovered your passion. Your Nurgle Predator tank was the highlight of the last of the old school Fantasy Miniatures books. How did you get into miniatures originally? What was the timeline, and how long were you out of the hobby? And what allowed you to rediscover that passion?


[DS]: I became aware of miniature painting through playing fantasy role playing games like Dungeons and Dragons. It must have been some time around 1980 after a group of my school friends came back from a trip to London where they’d visited the (one and only) Games Workshop store in Dalling Road. Amidst all the goodies they bought back was a small collection of metal miniatures, a mix of Citadel and Ral Partha as best I can recall. From the moment I clapped eyes on those tiny dull grey figures I was hooked! I absolutely knew that this hobby was for me.
I’d already developed a strong aptitude for art but my work had a tendency to get bogged down in lots of tiny tight detail. I sensed that here was a hobby where I could direct all that obsessiveness to good effect. It would also have the unexpected benefit helping to free up my painting and drawing style enough so that I could progress with my studies and work towards a place at art college. 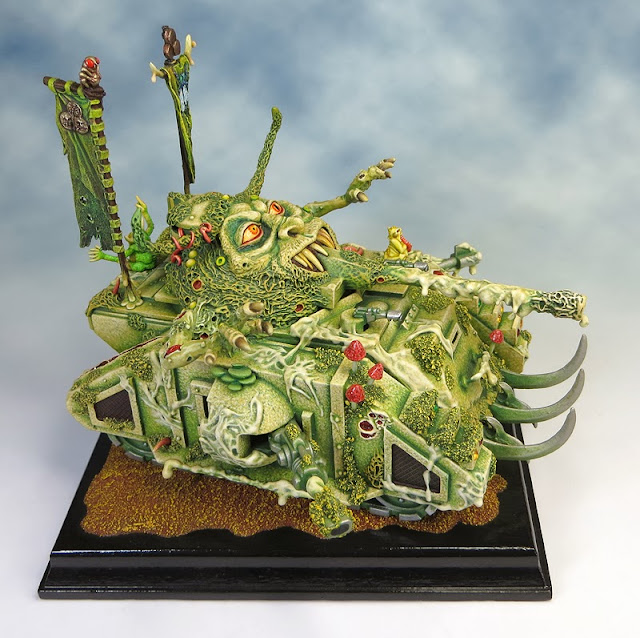 Feeder links to both blogs can be found below too!