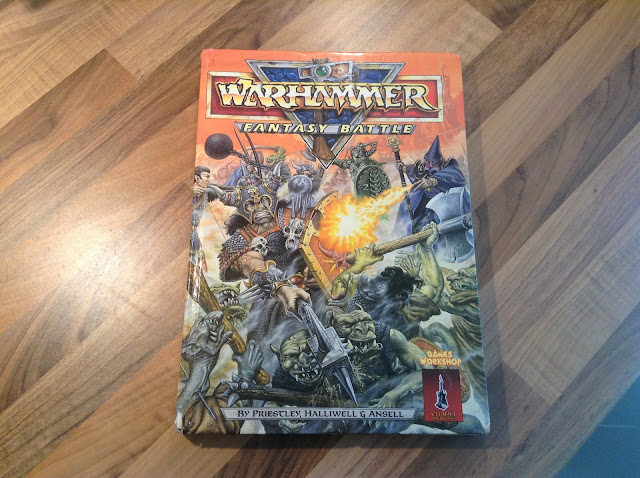 I have been inspired by the comments made by many of you on my previous post. There I was, with my tongue squarely in my cheek of course, making fun of the fact that, sometimes, we spend a little too much time on eBay buying lovely lead models that perhaps we don't really need.

Still, there is noting quite like the buzz of getting something cheap. Or waiting for the victorious purchase to arrive in the post. Or even the quiet satisfaction of restoring the miniature to its virgin glory with a mixture of antiseptic solution and washing up liquid.

So an outright ban would be unproductive and, probably, unenforcible anyway. So what to do? I have been feeling somewhat dissatisfied of late with my painting. This is most likely due to painting up rank and file miniatures to a time limit. For me, I love to have no restrictions on how long it takes a miniature. They should take as long as they take. But going at a perfectionist's snail pace is unlikely got get many models finished. I wanted the chance to paint lots of varied Citadel Old School models and practice my skills a little in the process. Forget army building or unit construction.

So I had the idea of painting a model for each entry in the Warhammer Fantasy battle Third Edition Bestiary. This would allow me to explore my collection a little, inject variety into the painting schedule and allow a little choice eBaying all at the same time! But like all challenges, there need to be a few rules to keep things on track and interesting. 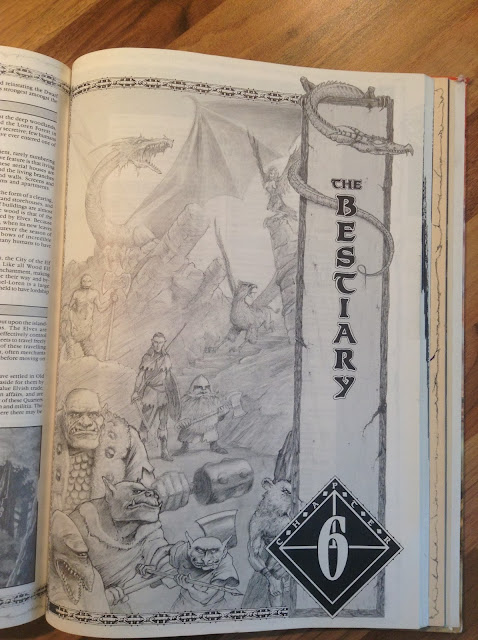 After a little bit of thought, I decided on a few guidelines to get myself going. Here is what I am suggesting. If you can think of anything that I have forgotten or have improvements and suggestions, please do make them!

1) Models need to follow the alphabetically published Bestiary as seen in WFB3.
2) Entries with variants need a separate model for each variant e.g. dwarfs or elves.
3) Miniatures chosen need to be Old School Citadel, or from an appropriate manufacturer if a model is unobtainable through rarity, expense or the fact that none were made.
4) Where ever possible, the selected model needs to have a shield, banner or opportunity for freehand painting as this is a skill I am keen to develop.
5) Each model needs a distinctive base, with a theme linked to the race depicted, that will still fit in with my style of basing. 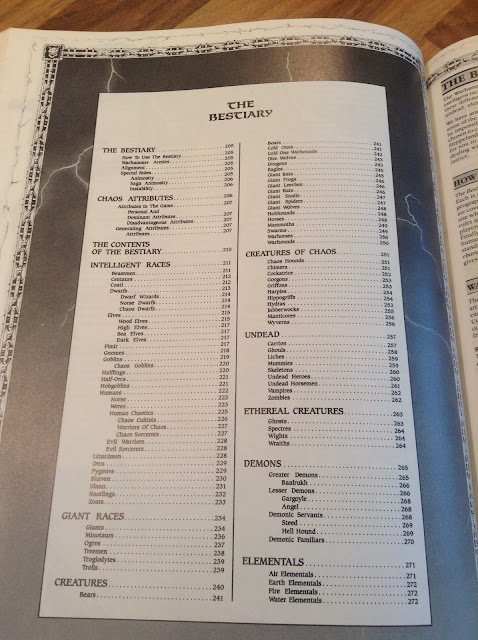 Once the guidelines were clear in my mind, I pulled my copy of WFB3 down off the shelf and flicked through the sections until I reached the Bestiary. I cast my eyes down the entries to soak in the first handful of models that I would need to source, prep and pant: beastmen, centaurs, coatl, dwarfs (Imperial, Norse and Chaos) Elves (Wood, High, Sea and Dark) and Fimir. So the first batch would amount to eleven models, from which I own examples for all but two; the Fimir and the Coatl.

So I am 'officially' allowed to keep my eyes open for Fimir and Coatl models! So if you spot anything likely, please do let me know in the comments section of this article! 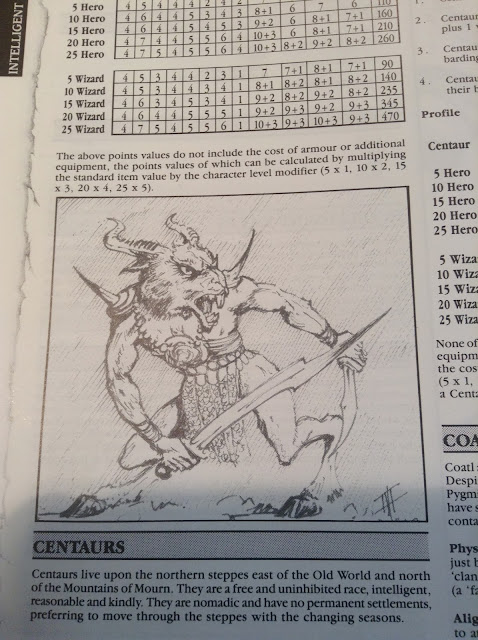 I had a look at the entry for beastmen in WFB3 and it was illustrated with the neat little pencil sketch seen above. I have painted loads of models in the vein of this picture before as the beastman has become associated with the goat headed half man for some years. Though, there was a time when the beastmen where a lot less defined and Citadel produced some truly wacky models for the range. I decided to select a model between the two extremes, and chose the Rhino headed model below. I have always felt that there has been a group missing from RoC and WFB - and that group are mutants. They exist in WFRP and there are plenty of mutant models out there but they are not true beastmen. Rhinoman reminded me of this gap and brought fond memories of Steve Jackson's Citadel of Chaos back as well.

Here is the model pre-clean up. Something that struck me when I was sorting through my models were the amusing tag names. BEEFMAN, BAESTMAN and (as was on my model) BEESTMAN being just three of the different spellings I uncovered. 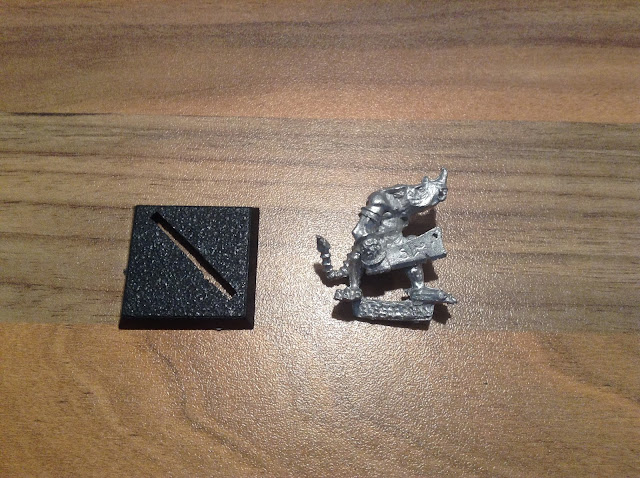 The model was different to the beastmen that I had painted before. Shorter and squatter with a real animal connection. He looks like he is snorting and ready to charge forwards with that meat cleaver brandished above his head! Crucially, the miniature also had a shield tag so attaching one should be simple. I will just need a little thought to consider what design I would paint on this chap's shield.

Anyway, I am off to clean and prime this little rhinoman. He needs gluing to a base, the base sanding and a good dry undercoat before I can begin the process of painting him. The night is fairly young, and I hope to get him finished as soon as possible.

Speak to you all when he is done.