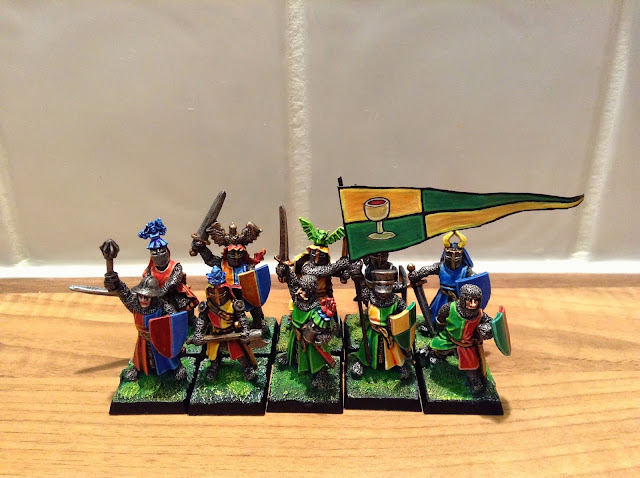 With the paint station metaphorically red hot at the moment I was able to finish off a unit of Bretonnian foot knights yesterday. In truth, they are part of a far larger unit, as I have a second rank of five to complete and a further eight models in the range to purchase. Though you will recognise these as Citadel Feudals, they are in fact modern Foundry castings picked up at Salute in April. For models nearly thirty years old, the quality of the sculpting and casting really stands up well today, though they are obviously much smaller than modern human sized troops produced by Citadel. Not that this actually matters, as people's heights vary in reality so why not in miniature form, and when the models are painted up and on a battlefield you really cannot notice anyway! 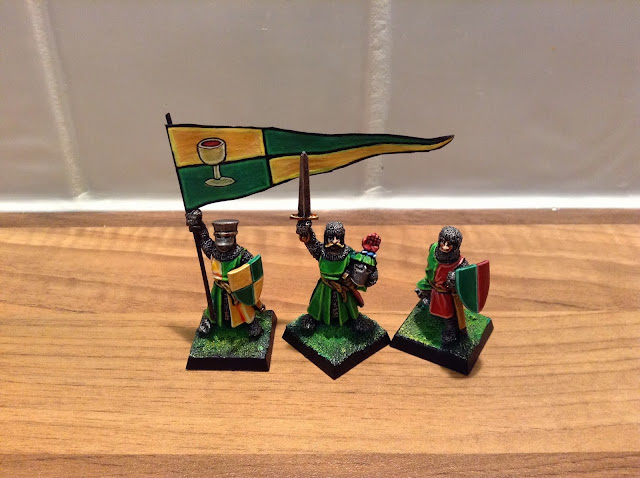 I had a go at a quick conversion to provide a standard bearer. Just a piece of brass rod replacing the old mace weapon. I need something to place on the top of the banner pole but have yet to decide. I though a severed head would do, but these knights look too prim and proper to be carrying around trophies of that nature - so any ideas would be appreciated! The chap in the centre with the droopy moustache is the unit commander, and he is a lovely, lovely model. I had fun exploring the uses of the Old School Citadel ink set with these miniatures, mixing in different amounts of inks with the base colours to create bright, vibrant shades that, to me anyway, seem appropriate to flamboyant knights. The banner was a quick, thirty minute experiment with flags and seemed to work quite well. I had no real plan with what I wanted to achieve, apart from I wanted results quickly. I am quite pleased with the end result, as the flag has shades of stained glass windows about it. 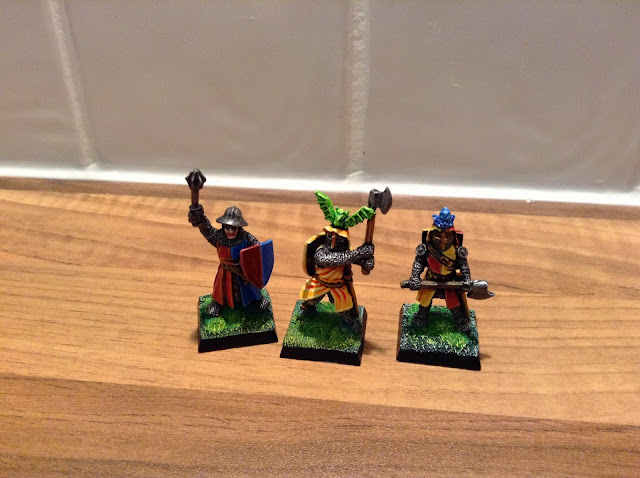 The centre model this time will be the Unit Champion. A bloke with a large axe is a good depiction of such a character don't you think? As you can see, there are some lovely variations to the figures and I didn't feel the tug of dull monotony as I painted these, as I did with the Nightmare Legion. My particular favourite from the range is on the right of the photograph here. A moody axeman indeed! 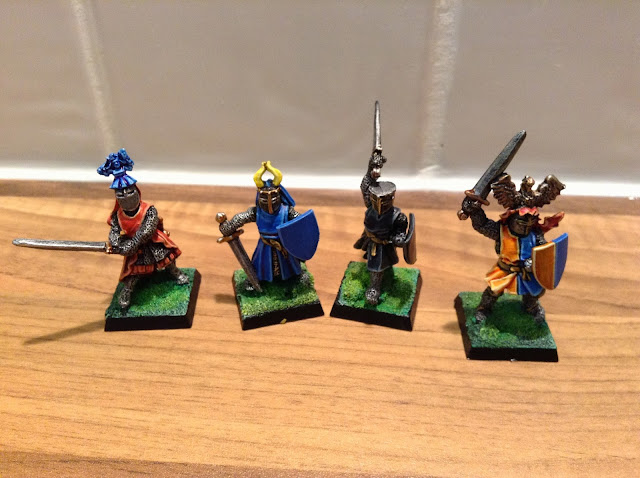 The final four models painted so far are another good example of the range of poses available in this series. When it came to colour scheme, I knew it would be easier to paint the entire unit in the same colours, and I was indeed tempted to do this, but I wanted to play around with colour so opted to make each knight different. This was great fun but was time consuming. Background wise, I want these knights to represent a 'free-company' of knights with no actual lord, so they use their own personal heraldry. This way, its simple to ally theme with any good forces narrative wise. They will also then fit in to my Old School Bretonnian army as a nice big unit among the Lords other retainers.

A Bretonnian army indeed! I remember when I started out this blog in February 2012. I had this idea of painting an army for each of the forces arrayed in Warhammer Armies. This was before the whole Oldhammer Community thing 'happened'. There were about four or five of us really, painting and collecting these old miniatures, and one thing that was fairly obvious back then, was how difficult the human forces of the Empire, Norse, Nipponese and Bretonnia would be to build. The models on eBay were of limited supply and expensive. Now, all four of these armies can be 'bought' off the shelf from Bryan Ansell's Foundry, in the original Citadel form too!

A couple of years ago this would have been impossible! If you are interested in the Bretonnian (or Baron's Wars) range, its can be found here and bought for £80 odd quid. Which is very, very cheap for an old school Oldhammer army I can tell you.


While you are visiting the Foundry, why not have a snoop around the other ranges as there are some fantastic little models that you can find. Just look at these brilliant mushrooms! Wouldn't they be perfect for Nurgle or Goblinoid forces?