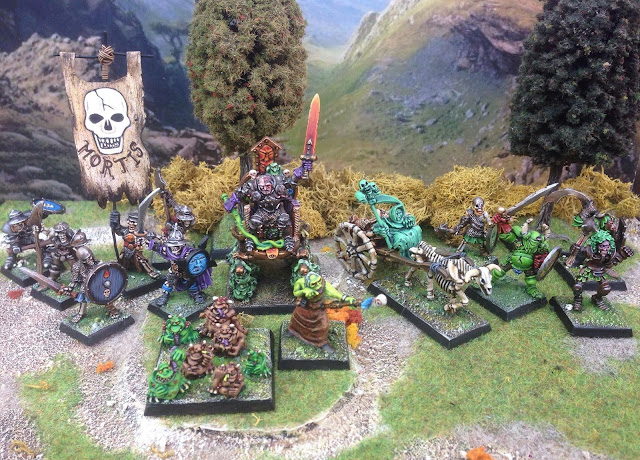 It may be the closing hours of April, but I have managed to complete a further two models for my Nurgle Warband. Can you spot them in the photograph above? As you can see, I have finally got my act together and grouped together all of the models I have painted thus far int o single frame. They barely fit onto my tiny gaming board now, so future shots will have to be done on one of my McDeath boards!

I haven't yet given the warband any background, and the force is currently known as 'Nurgle Army. There aren't a great deal of models in it, are there? But such is the nature of old school chaos armies where a single model can cost in at around 100 points! 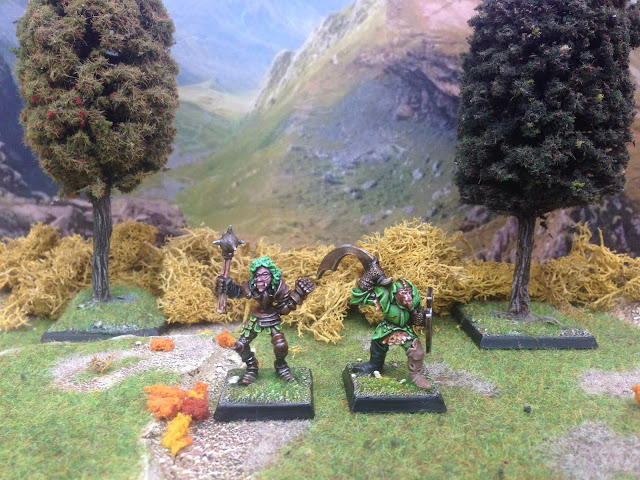 Here are the two new additions and as you can see they are both old Citadel chaos warriors from the 1980s. The model on the right is fairly nondescript really, and there are a number of variants of this model around. I would imagine that he would be a tad tricky to rank up in a large unit swinging that huge scimitar like that, but there was something about the pose that appealed to me. To help tie the model into the general Nurgle theme I used a pale green for his armour and fairly drab colours elsewhere on the model. Speed painting techniques helped bring him up to speed fairly rapidly this morning and despite the rush, he holds his own against the second model I have here, and she is everything but nondescript.

Female warriors are a rare sight in any wargames armies - for obvious reason, and though examples can be gleamed from the pages of history, in reality they were very, very few in number. I guess that is so in the quasi-historical world of '80s Warhammer too. This model has a rather odd history in my collection. I bought her years and years ago as part of a job lot but she was smeared with layers of black that no amount of Nitro-Mors could remove, so as you would imagine she languished at the bottle of a Dettol jar through most of the Oldhammer revolution. I rediscovered her recently and the many years she spent soaking in the stripper seemed to finally shift the black gunk. Upon cleaning her up properly, I found that for some reason she had been cut in half! I nearly lost her upper body down the sink! 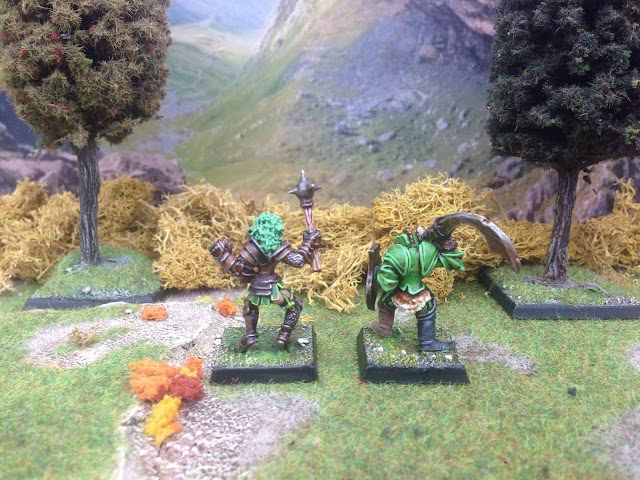 But with some nifty pin making and a little glue, she was easy to repair. As time was a premium I basecoated the entire model with brown paint and whacked over the top a couple of ink washes, first chestnut and then an orange/brown. Highlighting the edges of the armour with a dark silver was enough to give the impression of rusty plate male and I used a sickly purple to pick out the facial features and upper thigh. As green acts as a cohesive colour for the warband I decked her out with a few fancy green leather straps around her waist and tarted up her hairdo with a nice green rinse.

She took me about ninety minutes to complete, bar drying time for the washes. 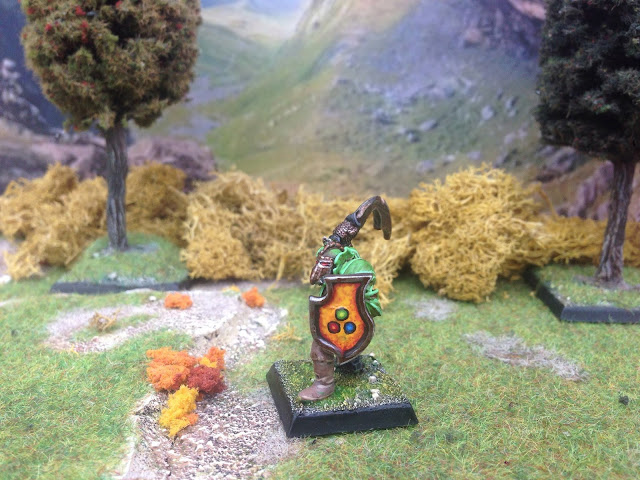 The first warrior required a shield and I threw this together quite quickly. Initially, I quite liked the design (it is based on the three coloured grinning faces from the rear of the palanquin) but in retrospect I think it needs something more to liven it up. Any ideas welcome!

So, not bad for April, especially considering other months. A Nurgling base weighs in at 30 points and the chaos warriors 75 points apiece, giving me a grand total of 180 points for this month!

I need to put myself through the stress of moving house more often it seems, with output like this!