Hello one and all!

Some of you may have been intrigued to know the reason for my absence from the old school scene, well I have been on my holidays (with wife, kids and in-laws) to Spain and have had not touched base with this blog, my Facebook group or the Bloodforum for many days. Having a bit of time away from work and hobby is always a good thing as it gives you the time to reflect on how things are going with your collecting and painting. I spent a week or so in Jaeva (or Xabia in Catalan) pondering how best to draw my Khorne army to a close, what to do next and if the many people I met or walked past, or sat next to, were secret Oldhammer fans. Perhaps I should have worn one of my t-shirts?

I didn't do any hobby. Though I did toy with the idea of taking some paints and miniatures with me, though the hassle of shifting the basics across the world was too great. I did read Zaragoz though, which was quite apt as the story was set in Estalia. I intend to do a post about the novel in the near future.

However, I was quite busy up to the point of holidaying and thought you might be interested to see what I have been working on. Namely, the final unit for my Khorne army, a monster of an eBay steal and a shield or two. So without much of a furtherado, let's have a look!


As I was saying earlier, I spent quite a bit of time toying with the idea of what to do next. The challenge of working on the giant spider was a real eye-opener for me, so I thought about painting up a menagarie of monsters as a next step. Off the top of my head, I own a giant bat, a chimera and a manticore. All interesting pieces to work on. Then there is the 25th anniversary of Slaves to Darkness. I've just spent six months with a mortal Khorne force and fancy a daemonic Slanneshi legion. Or there is the human army I was contemplating, probably an Imperial one.

To help with this I am after some specific models. After my first tumble with the world of trading, I've got loads of wonderful miniatures but nothing I can make a decent unit out of. These are what I am after. I am open to trades but would prefer to buy outright. This is what I am after, can anyone help? 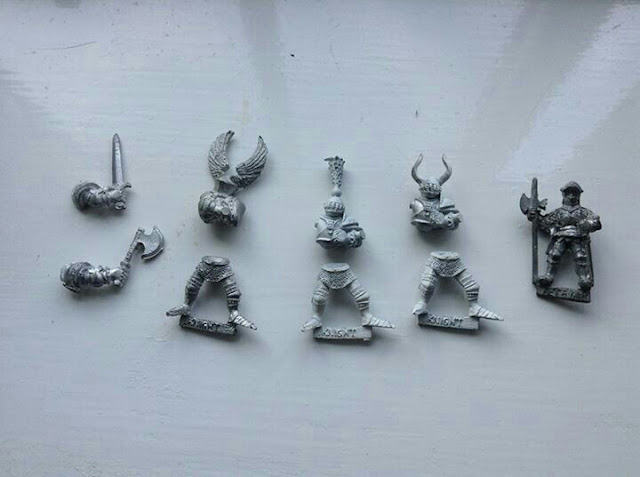