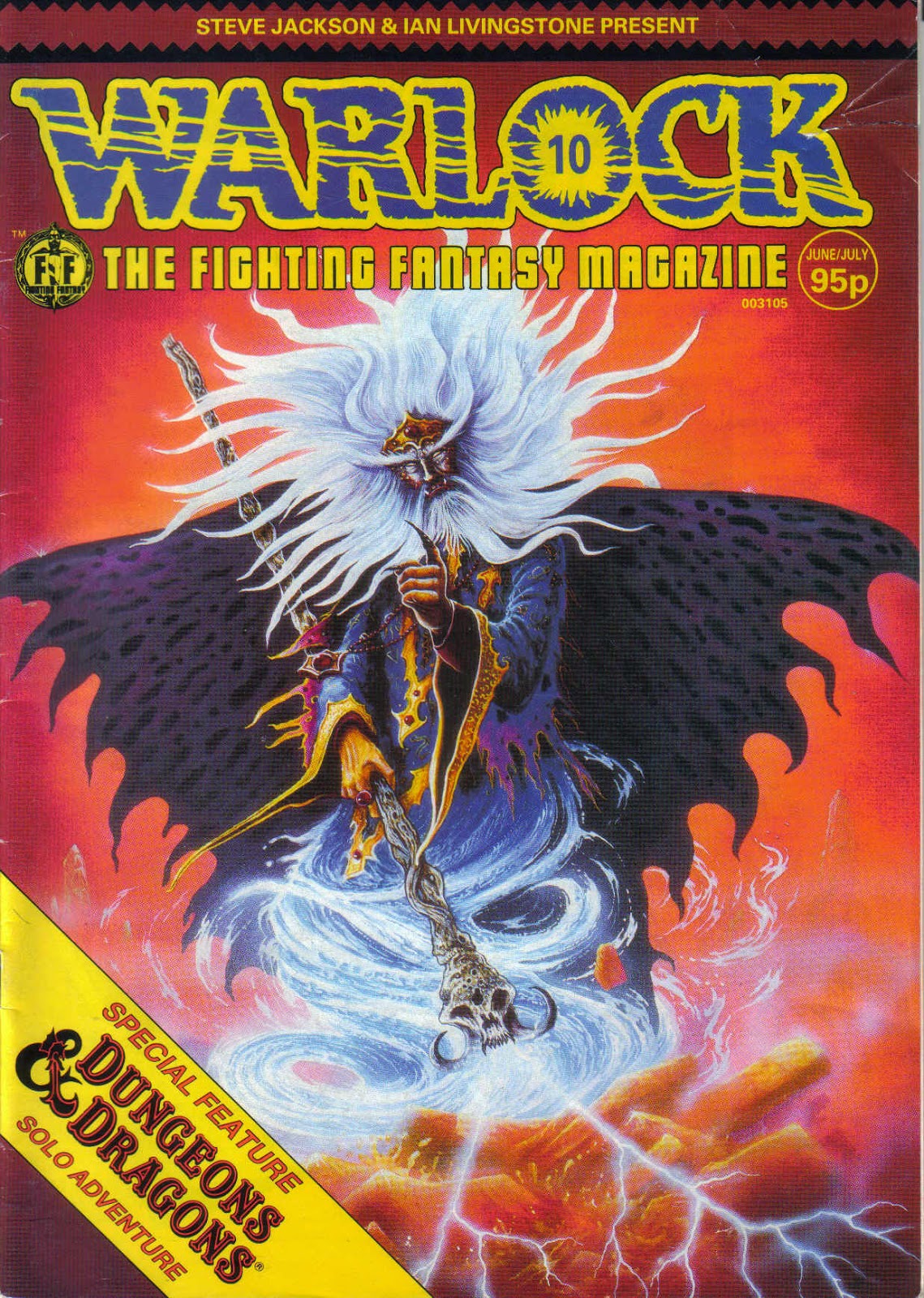 The other day I posted about Graeme Davis' 'Fields of Battle' rule system that was published in Warlock Magazine in the mid 1980s. Now if you don't know about Warlock Magazine, it was really just a White Dwarf for Fighting Fantasy and shared many of the same writers and staff. Its earlier editions, up to issue 6, where Penguin publishing affairs really, and the Games Workshop crew didn't really take control until after that issue. And it shows, with an increased focus on Citadel products and the 'Warhammer Hobby' as it later became known.

One of these later additions to the magazine was the Metal Mayhem page, which was essentially a colour presentation of painted models from the Citadel team. Sadly, this article only ran in the last three issues of Warlock - which ceased publication after issue 13 if you didn't know! But we have been left with three colour pages of rarely seen Citadel models, some of which I have only seen in these series of articles. So I am rather pleased to be able to take a closer look at them with you. 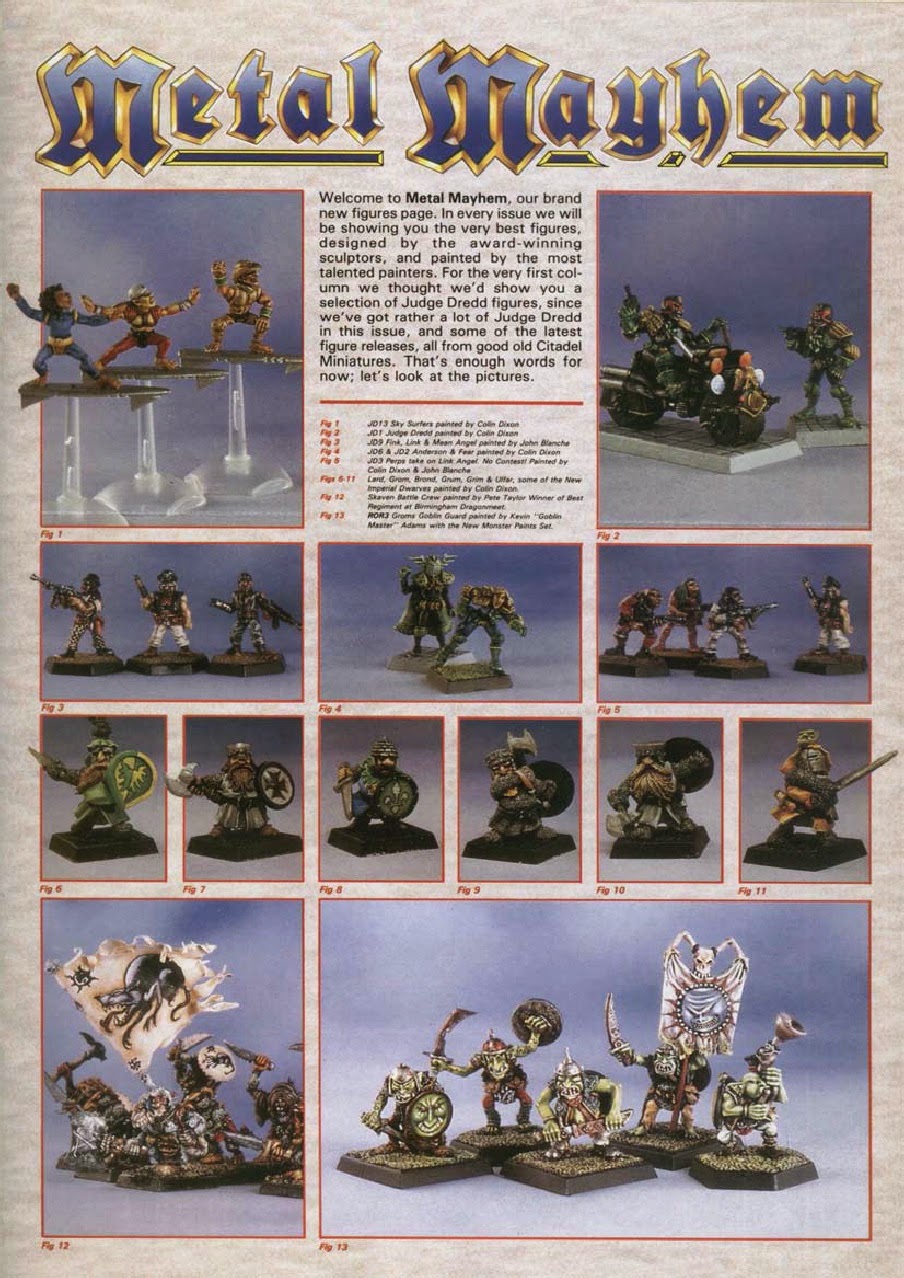 Judge Dredd fans will certainly enjoy this first page, as it contains a series of painted models from that particular Citadel Range. The models seen at the top of the page were all painted by Colin Dixon, who was Citadel's first ever full time miniature painter, with able assistance for John Blanche. In fact, some of these models I have never before seen painted up and its a real treat to see them here. Starting from the top left, we have three Sky Surfers, which I have never seen painted elsewhere, and they have suitable comic book style paint jobs. I can't say I know a huge amount about these particular Dredd characters but I do have some vague memories from the 1980s about them in a comic book I bought.

Things get a little more interesting when you look at the trio of models below them. I am pretty certain that the painted Link model was on display in Bryan's cabinet at this years Oldhammer Weekend and I am fairly sure the Mighty Avenger pointed him out to me as being painted by the great John Blanche... but then again it could all just be some chaos inspired dream... I am pretty certain that the two painted models (other Angels if I recall correctly) that flank Link have not been seen published in colour before. So its nice to see them.

Following on from that we have a couple of painted Judges (Anderson and Fear by the looks of them) by Colin Dixon, again I am sure I have not seen these painted examples before, and this pattern continues on an upwards trend with some Perps and Old Judge Dredd himself, on and off his motorbike.

Underneath we can see some fantasy models and the first batch, dwarfs, are part of Colin Dixon's Imperial Dwarf range. A couple of these I recognise from earlier 'EMs and from the old Citadel Ads but there are a couple that seem new to my eyes. I rather like the colour schemes and shield designs on figures 6 and 7. The skaven here a rather interesting as the caption tells us they were painted by Pete Taylor (he of the enormous Fimir army and appearing in Warhammer Armies fame) and seem to have won a prize at the painting competition at Dragonmeet that year. I really rather suspect that these models are part of that massive skaven horde he lords over in the aforementioned book. Nice to see them close up I am sure you will agree.

Finally, we he Grom's Goblin Guard by Kev Adams. I love Kev's '80s paint work and he was clearly better at dabbing on the Goblin Green than many of the 'official 'Eavy Metal team'. These are much more well known figures, and that standard bearer has appeared more than one in White Dwarf, and other places, over the years.

I wonder if he still has them?﻿ 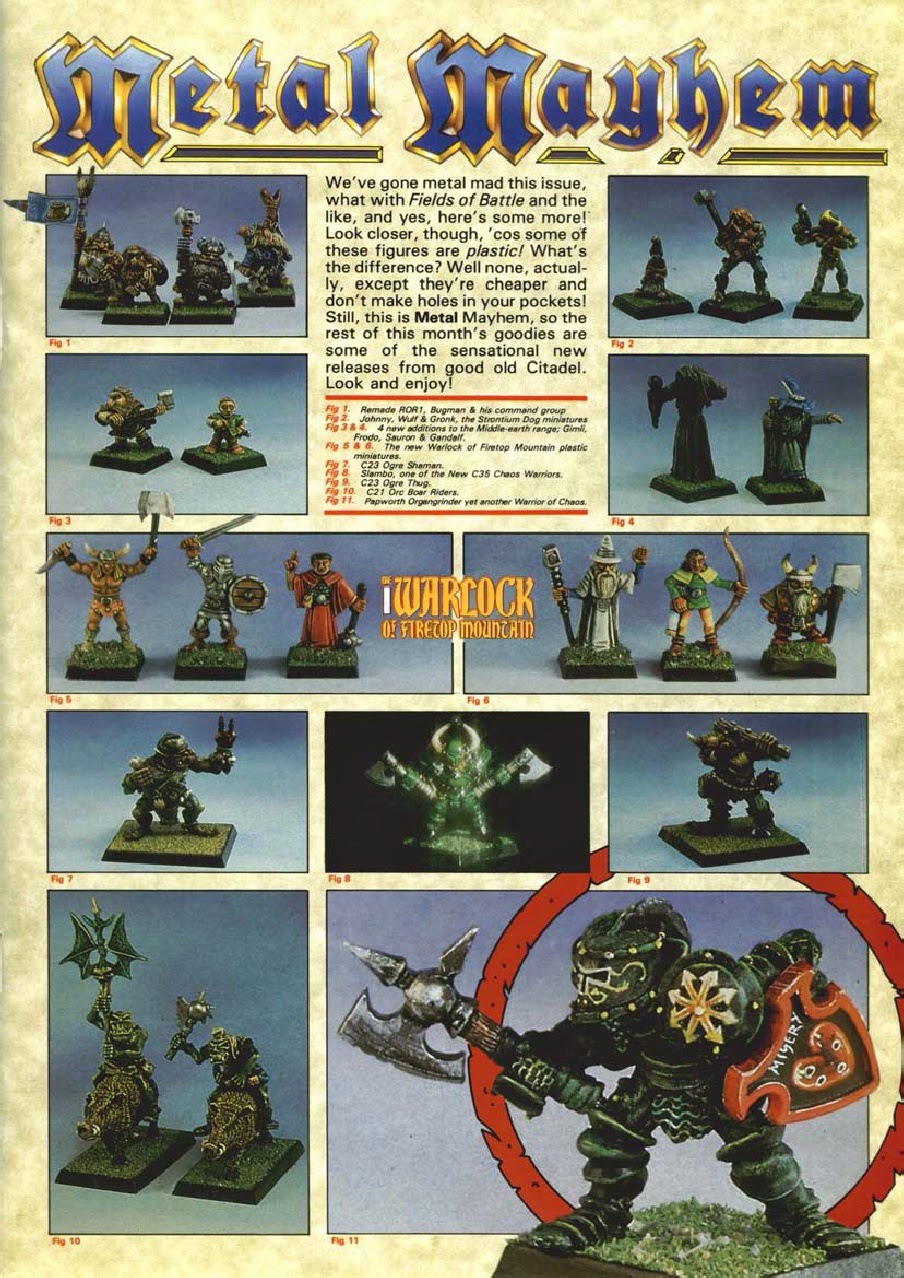 The models shown here are larely lifted from 'Eavy Metal articles from White Dwarf, even down to the red ring around that Chaos Warrior which I am pretty certain I have seen in WD. Starting from the top left of the page again, we have the second edition character models from Bugman's Rangers, some Lord of the Rings characters, Slambo (in green) two Jes Goodwin Ogres and some lovely Orc Boar Riders. The stand out pieces here have to be the painted plastic Warlock of Firetop Mountain miniatures, which I cannot say I have seen in COLOUR before. Though whether these are metal masters or actual plastic models is open to debate. Looking at those models with my experienced eye I would say they were most likely metal, but if I am wrong it just goes to show how good those plastic models were. ﻿ 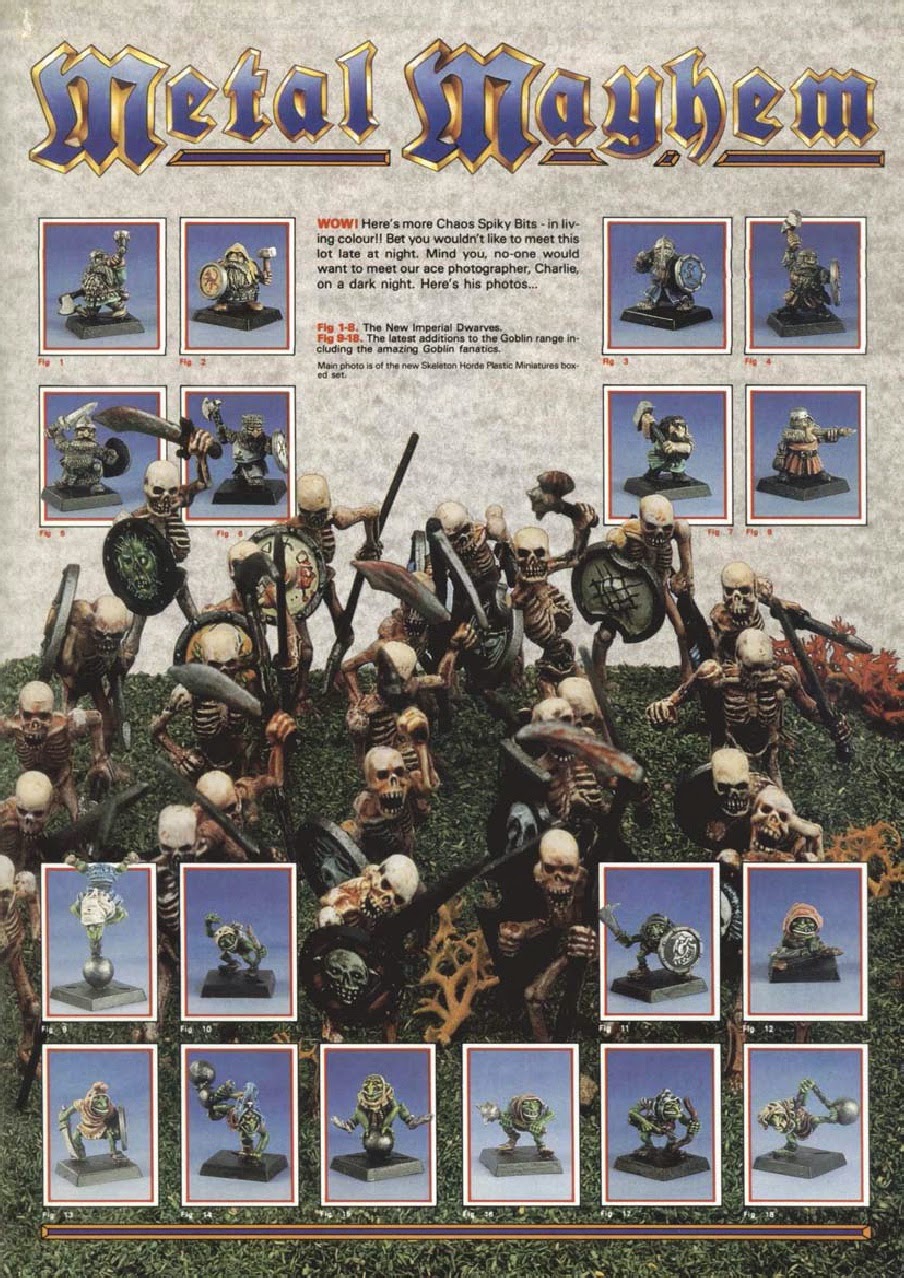 The final page looks like very little effort has gone into any form of journalistic comment. Its not surprising really, as these images come from the final issue of Warlock, when things were winding down somewhat. The page depcits more of the new Imperial Dwarf range, most likely painted by Colin Dixon, as well as the absolutely brilliant goblin range from the mid 1980s. I have a few of these models in my collection and they are great, great fun! The definitive goblin fanatics get a worthy mention. The Skeleton Horde were obviously released around this time, hence the big photographic push here (there was an advert for them later on in the magazine) and they remain the best plastic skeletons ever produced by anyone.
Go buy some if you don't already own them.
On thing this final article does through up is the name of the photographer. Phil Lewis is more famous for being Citadel's lensman during the Golden Age but I haven't heard of a Charlie before. Any old timers out there have any notion about who this Charlie may have been?
Onwards and upwards.
Orlygg.
Posted by Orlygg at 05:54