Shadowking: An interview with Tony Yates

Many of you who attended BOYL '13 or '14 will no doubt remember Tony. A very passionate wargamer who has been involved in the business of fantasy and science fiction wargaming since its early days. I asked Tony if he would be willing to have a quick chat about his involvement and recollections as well as having a look at his collection of miniatures, many of which he has made himself. A prolific blogger, Tony runs his own site showcasing his work. You can find it here at Shadowkings.

Right, over to Tony!

RoC80s: What were you first steps into wargaming, miniatures and the general fantasy lark?

TY: Easy, it was the comics and books, with thier fantastic science fiction worlds, that we had at our fingertips back when I was growing up. My first books were Starship Troopers and the Princess of Mars, after that I got hooked on all of Michael Moorcocks many novels. I also loved the characters that appeared in Marvel Comics adaptations early on and DC Sorcery too, Though I also read some European comics that I had to translate. The French ones were not bad but the Italian ones were much better, with lots of lots of memorable actionpacked battles. Reading these inspired me to wargame. My earliest miniatures were Airfix plastics, with my first box a ACW artillery set my dad bought me when I was really poorly one week.

RoC80s: How did you move from being a fan of the genre to becoming involved in the embryonic British games industry?

TY: I sent Bryan Ansell some art I had created as he had started Asgard and he invited me to meet him so along I went, I think the first picture of mine he used was the skelton halberdeir I was chuffed to death, Later, we becomes friends as our intrests in fantasy and comics were similar. I did art for Laserburn Combat 3000, the Reaper Fantasy rules and its supplements, Then at citadel I did the Spacefarers and the concepts for the Star Trek miniatures line, The chaos warriors box set wth sepearte heads were also based on my concepts I think and helped I write the rules published in White Dwarf!

I used to send Bryan anything I did actually!

RoC80s: You worked on many of the illustrations for Laserburn and Reaper back in the late 1970s and early 1980s. What are your memories of the development of these games?

TY: I first met Rick Priestley when he was running Citadel's mail order and I ended up doing some artwork for him for the Laserburn project. I was also involved with the 'Death World' supplement he did with Richard Halliwell, I always enjoyed chatting with Hal as he was full of ideas. Though the Death World stuff never really saw the light of day, being involved in all the enthusiasm was fantastic. I even contributed a few ideas! For example, when Laserburn and Imperial Commander were being developed, I upped the 'power armour' to 'dreadnaught armour' and suggested the use of conversion beamers. One idea we had that never did take off was the 'cartridge gun!' This was a weapon that could fire anything - explosive flare, smoke, armour piercing rounds the lot!

I can remember being shown the first two models that the Perry Twins made, a large orc and a smaller one I think, which were both fantastic in my eyes. Nick Lund of Chronicle I had met and knew before he went to work for Citadel. I spoke a few times with Nick Bibby. Also, I can remember the layout to the original edition of Warhammer and a table full of John Blanche's art. As I said before, Rick Priestley was always a good guy and great to talk too, much like he is now. Big Tony Ackland had great pages of art for the books and WD. All the studio staff always liked my stuff so I came away happy!
RoC80s: What about sculpting? Some of us Oldhammerers have seen your work online and at events. How did you get started here?

TY: Well I first tried when I made a Conan in plastic when I was 13 from an Airfix Tarzan set, but I say this hand on heart that Bryan showed me how to make miniatures with milliput and then green putty. He always helped and encouraged me, and was kind enough to always cast my pieces, so I owe that all to him,
I also had the privilege to watch him making wargames figures. I saw the first work the Perry Twins sent to him and many others. I had a very good basic knowledge of anatomy leaned through my art and comic illustrations that I had done. So I had some idea of pose and look I would spend hours with milliput on the dollies Bryan sent me. My biggest inspiration then was a line of 54mm Wild West cowboys Bryan had converted for the table top games rules he helped write. The line of perfect characters and poses really blew me away.

RoC80s: Eventually, you began to work at the Wargames Foundry. Which particular projects did you enjoy the most?

When Bryan moved back to Jersey, I spoke to him many times on the phone and sent him art work and we had long talks about toy soilders, When he returned to Nottingham, I remember one day I rang him and he said we need a concept artist. I said, 'can I have an interview the next day?' I went to the factory and well I got the job! The following week, I went to work with Kevin adams on the mercenary orcs he made there. I also worked with Mark Sims on the Vikings (which became the best sellers), then the Nymphs and Reverant Elves. I provided further concepts for the High Elf range and the Tomb Dwarfs, the Mountain Dwarfs and the Street Violence settings and ideas along with pictures and concepts for the Amazons. And a lot more besides!

Next up, I present a mere fraction of Tony's astonishing collection of wargaming figures. These really are just the tip of the iceburg as Tony really does seem to have a model of everything. Many of these miniatures have been converted or sculpted by Tony, but so wide and varied is his collection its hard to state who made what. If you recognise something please drop me a line in the comments and I shall update the captions at a later date.

Just a final word to say a big thank you to Tony for taking the time out talking to me over the last month or so. Enjoy his work. 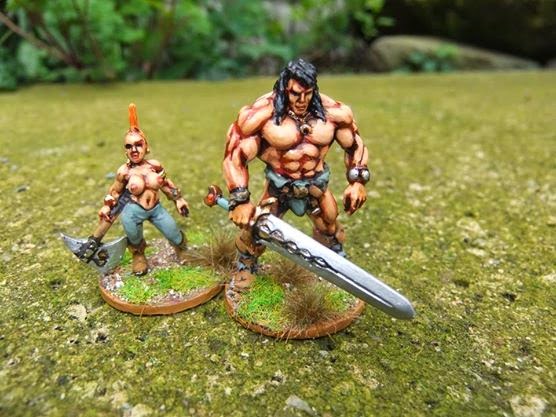 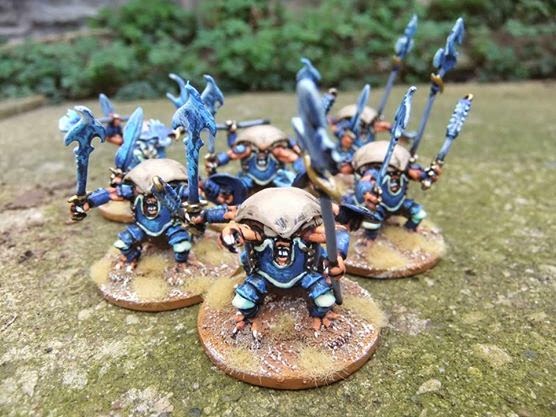 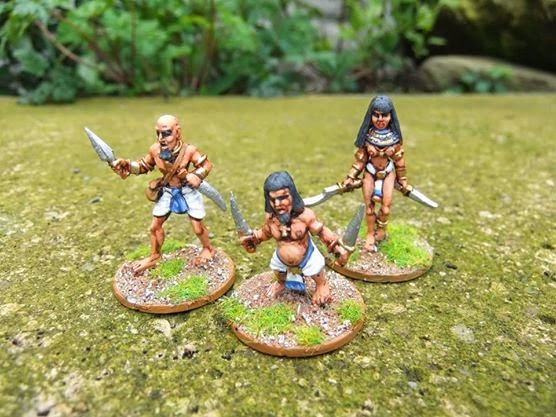 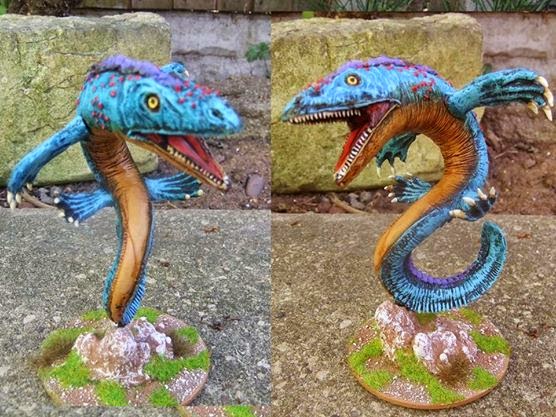 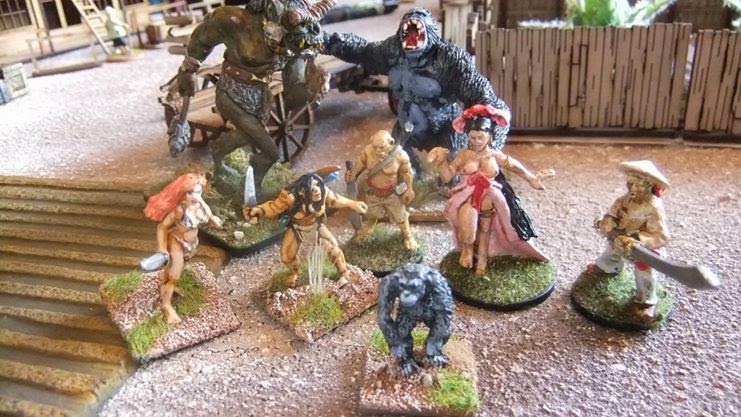 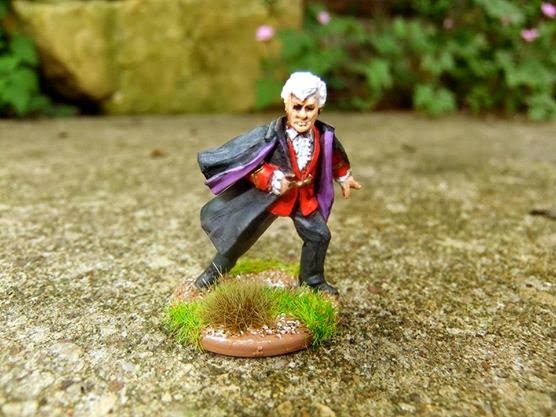 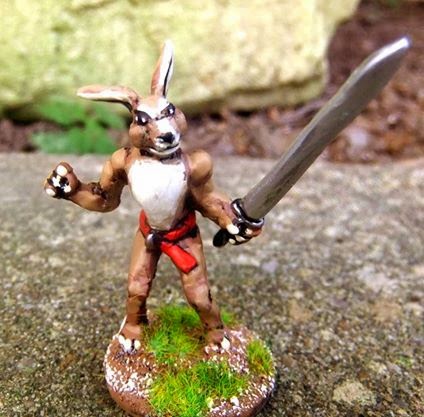 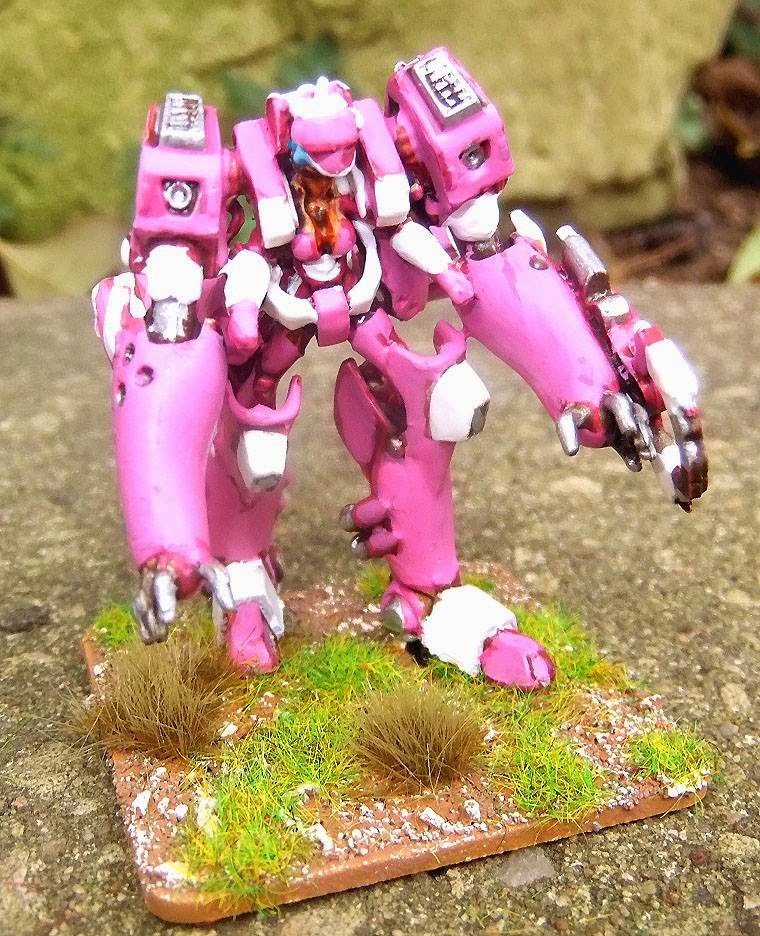 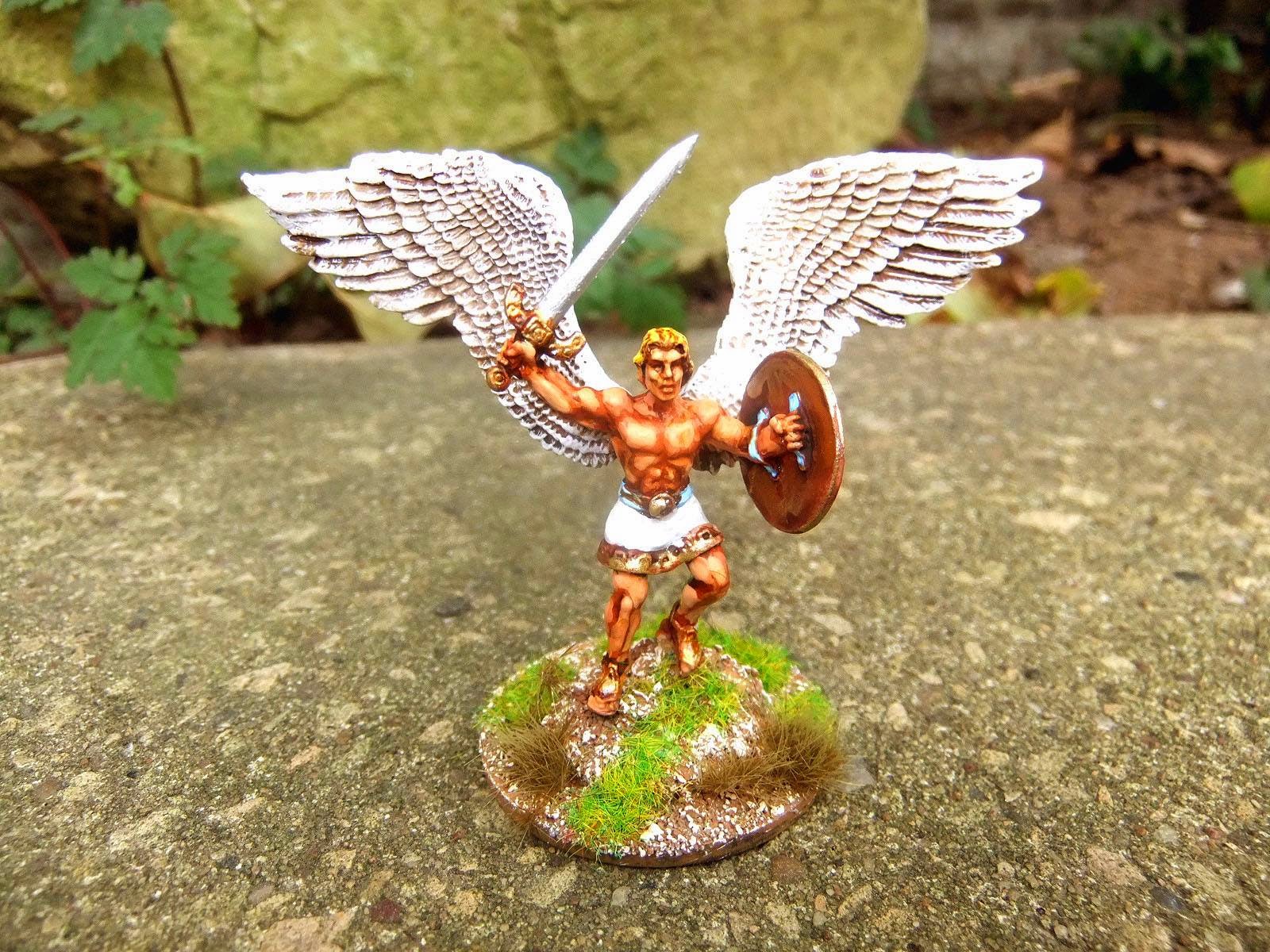 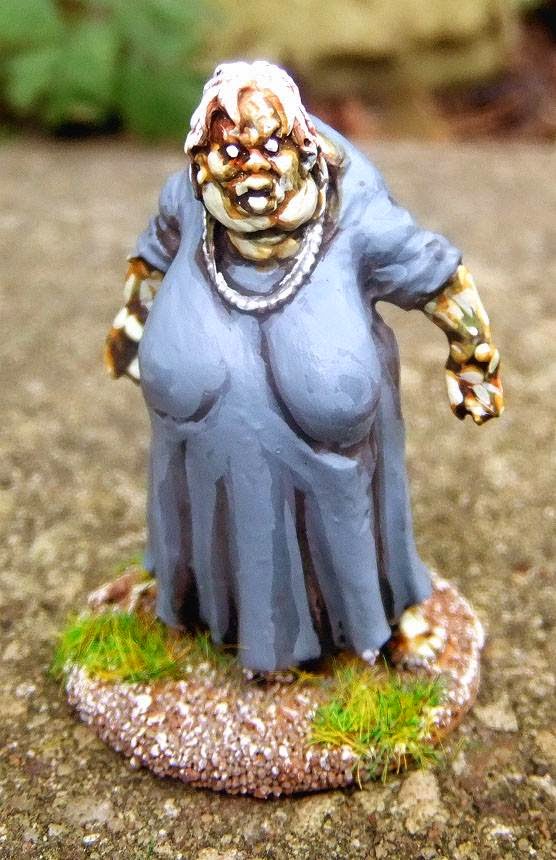 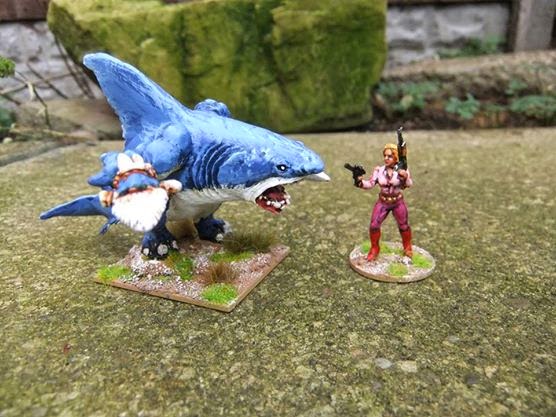 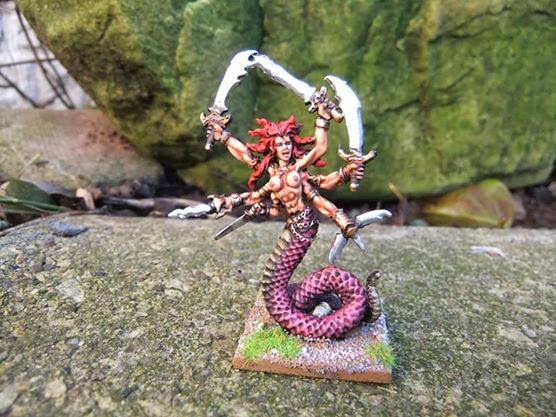 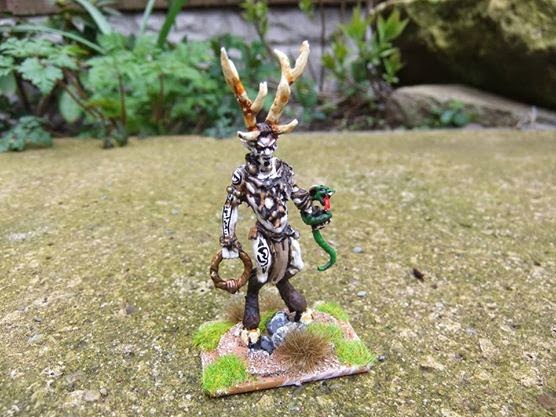 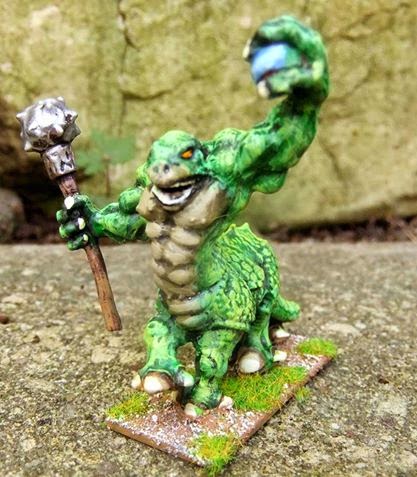 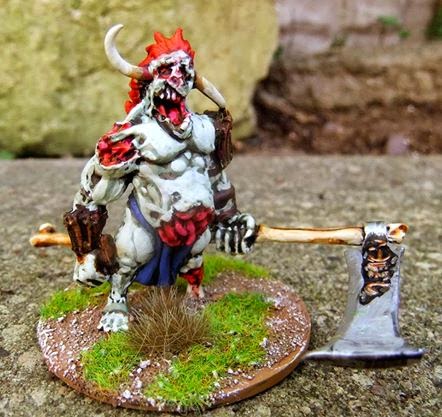 Be sure to head over to Tony's blog, Shadowkings, and give him your support by following him. Be sure to spend a fair bit of time going through his collection of miniatures as there are some real corkers in there!
Posted by Orlygg at 03:40