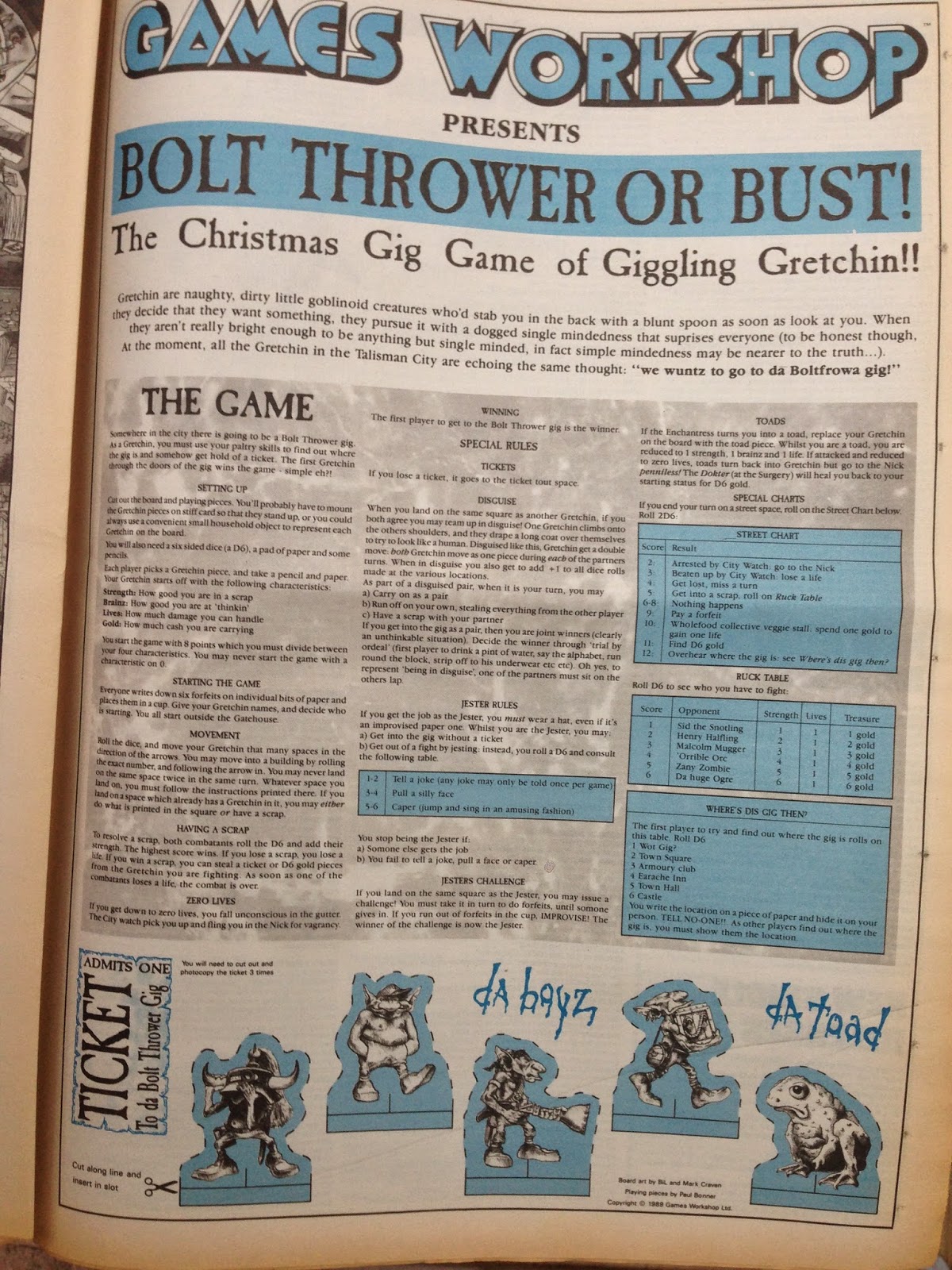 How about this then? A genuine lost GW game from Bryan Ansell's golden age of the later 1980s. As far as I am aware, there is no record of this on any other website on the internet, nor have I seen it referred to elsewhere in any other vintage publication. In truth, its an advert disguised as a game (to advertise a GW sponsored Bolt Thrower tour in 1989/90 mostly likely) and in this age of articles disguised as adverts, its just goes to show how far GW were once willing to go to get their product out to the masses.

Where did I uncover this strange slice of history? Well, it all comes done the generosity of one of my benefactors. A thoroughly decent Englishman called John Clarke who gave me a rather ancient photocopy of this article alongside a mint Ambull miniature - for free! Such generosity is becoming a staple of Oldhammer gaming and I hope it shall long reign. I will take this opportunity to publicly thank John here and I can also say that he hopes to send me some photographs of his massive collection of old school lead some time in the future. He has shown me a few of his photographs and lets just say I think he has one of the biggest collections of 1980s LotR in the world, and really needs to be seen to be believed!

Anyway, the old photocopy he gave me had a few clues to the providence of this forgotten game - namely the corner title of SOUNDS December 23/30 1989. What was SOUNDS magazine (1970-1991) you may well ask, especially if you are one of this blog's many overseas readers. Well, once in the UK there was a 'trinity' if you like of very serious musical newspapers - these were SOUNDS, Melody Maker and New Musical Express. Now SOUNDS was quite influential and coined terms such as 'Britpop', gave Nirvana one of their first ever interviews and launched the seminal Kerrang! magazine. Sadly, the paper folded in about 1991 due to the parent company selling off all of its news titles.

With the date and name of the paper I approached a friend who is involved in British music equivalent of Oldhammer, only instead of the focus being on British fantasy gaming, they get excited about old British musical bands that everyone else has forgotten about. I inquired after the issue in questions and after a week or two was directed towards an eBay lot. A few quid later, and the newspaper was mine. 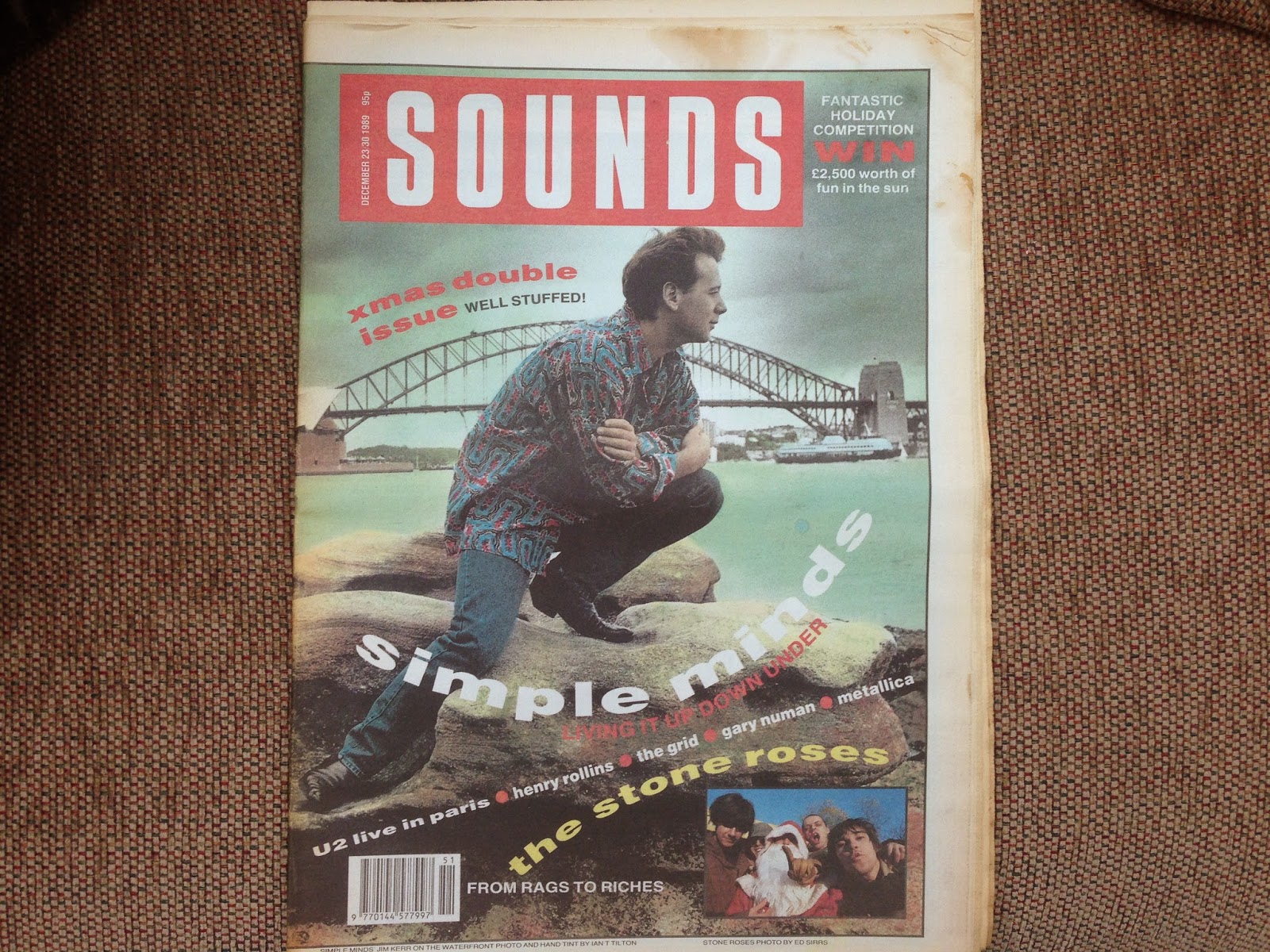 And here it is... A quick glance at the front page just goes to show how long ago this was, as does a peer through the back and white photographs within. The fashions are very memorable indeed! Anyone else remember the Grid - I think they had a bit hit with 'Swamp Thing' at one point! 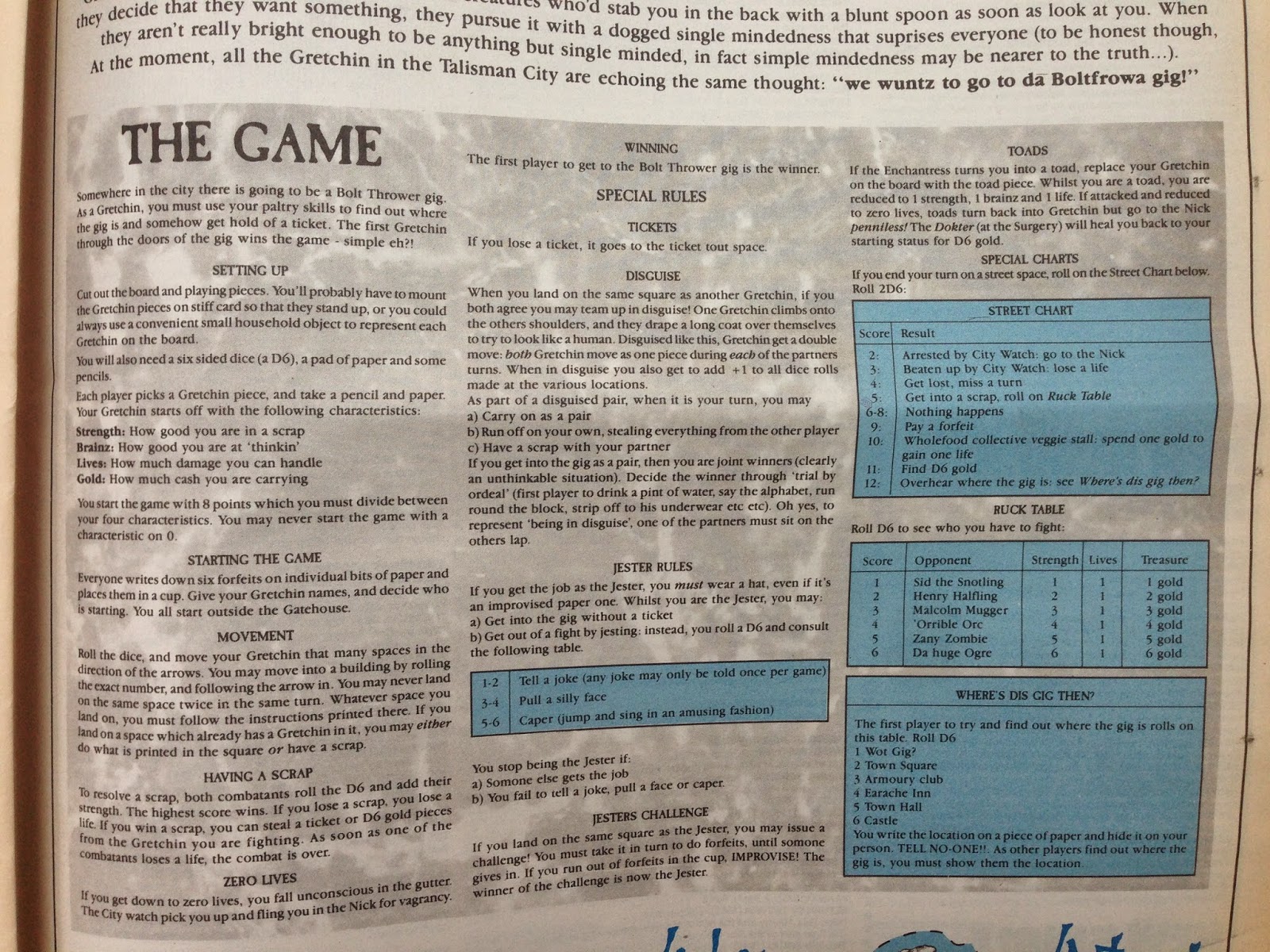 Now the game itself has a very simple premise. There are a bunch of goblins who want to get to a Bolt Thrower gig but have two problems to contend with. One, they have no tickets for the show. Two, that have no idea where the gig is taking place. So, in order to deafen their eardrums with the grinding sound of Bolt Thrower's death metal (I bet that World Eater is a favourite track of those gobbos!) they need to go on a mad-cap quest of goblin inspired Talisman.

Have a quick read through of the rules above and you will see it has it all. The basic rule set of Talisman with additional 'goblin' rules. I won't spoil them for you and shall leave you to study the photograph. One thing I shall state is my pleasure at seeing new random tables. I love random tables! 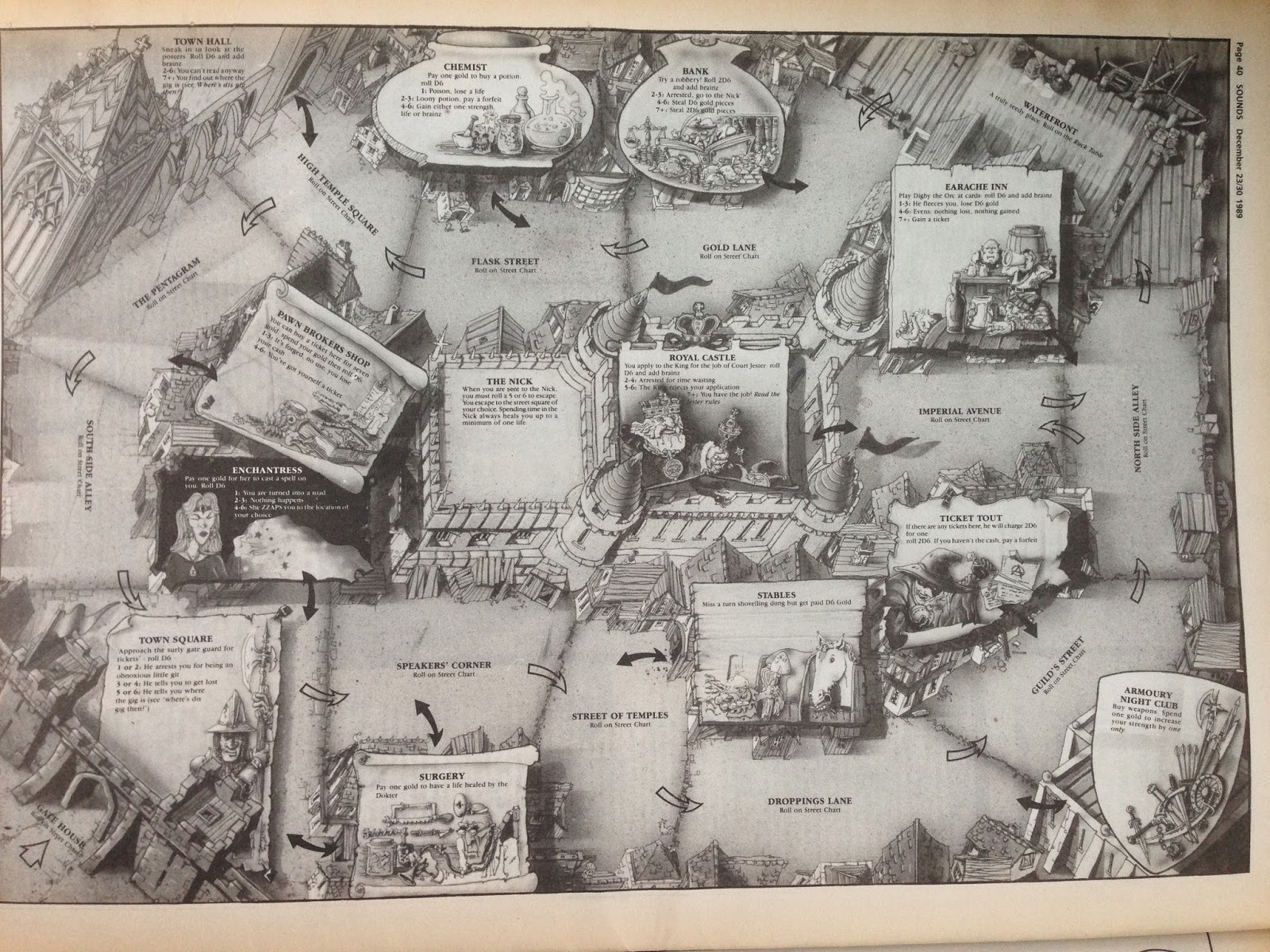 There is even an A3 playing board, which is sadly in black and white - though studying the work of art, its obvious that there was once a colour version. It was designed and produced by classic GW stalwart, BiL, who was aided and abetted by Mark Craven.  Now due to its size, its rather a challenge to scan but I have taken a series of digital photographs of it, one of which can be seen here. I would love someone to 'colourise' it if they can, and I expect that there are a number of readers of this blog with the skills to do this. If you are interested in having a go, just email me at realmofchaos80s@yahoo.co.uk and I can send you some better photographs or whenever. I know that Blogger reduces the quality of an image when you upload it.

You see, I feel that this game has plenty of potential for playing at a future Oldhammer Event, hopefully BOYL '15, and has 'hotel bar room game' written all over it. After a few beers I think it would be a good laugh to try it out, though I dare to think of the types of forfeit that some of the characters I have met as past events would invent! 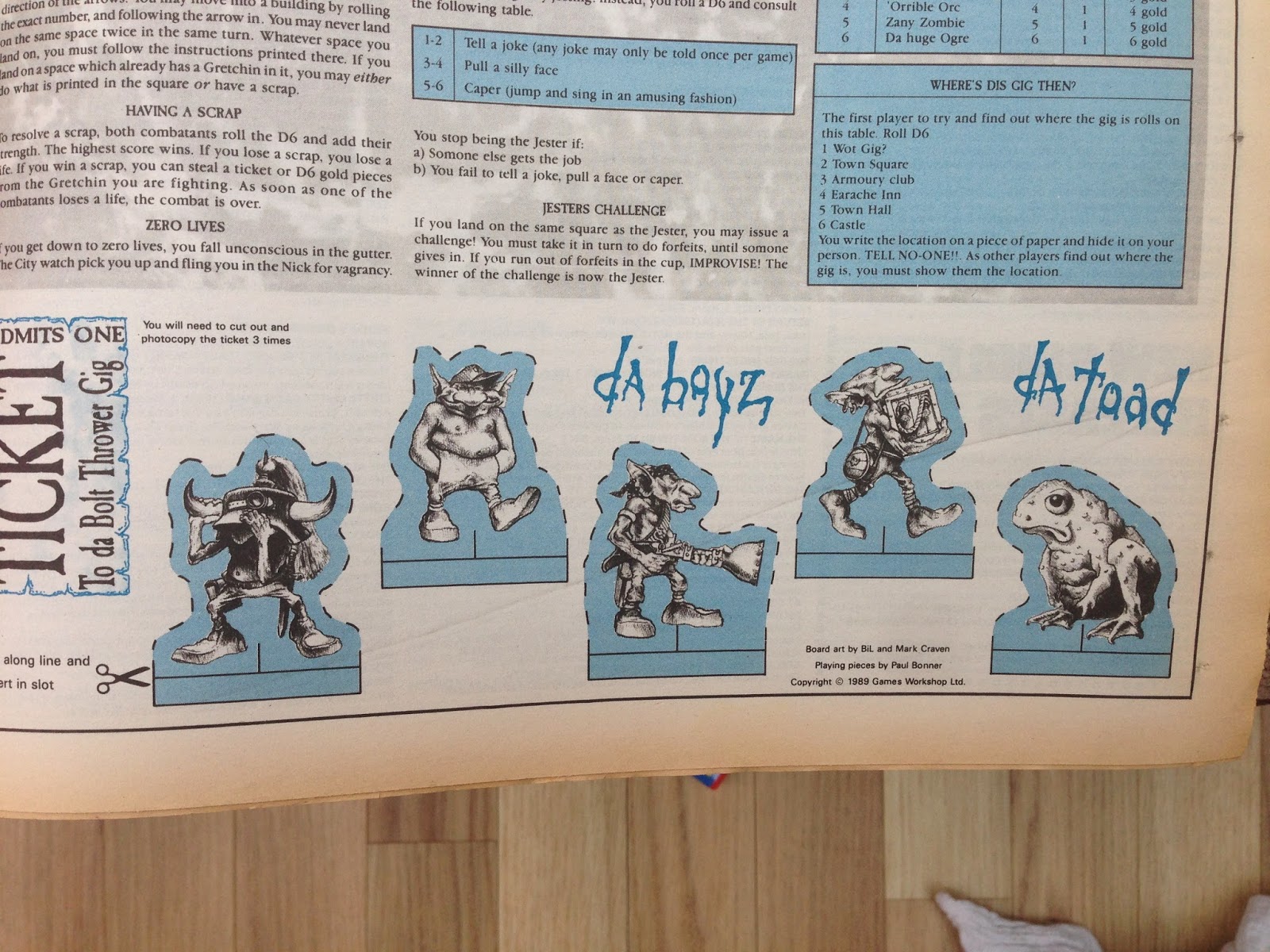 In true talisman style, there are even some cut out counters to use to play with. Again I am hoping that one of you could colourise these in some way, as by judging the images I have reproduced for you here, they may have once been in colour. The illustrations of the playing pieces were done by the one and only Paul Bonner. There is even a Bolt Thrower gig ticket

In conclusion, I left hoping that we can restore this game for the 21st century, and hopefully get to play it. It also leaves me wondering what other curios from the GW's past may be loitering around in the most unusual of places...