The Grand Plan: Ode to Heroquest

What a fantastic product you were!

I used to have a rather battered copy but I lost it when changing schools, it had been an idea of mine to do a 'Heroquest' club for 9-10 year olds but my then head didn't have the vision. I imagined that I'd be planting the seeds of future gamers and keep the wargaming hobby secure into the next generation.

As I type this, I am a mere two weeks away from meeting my second child. She is to be born via C-Section due to the complications my wife has been suffering since February. This got me thinking about Heroquest once more.

You see, Heroquest was a classic game! A true gateway to Warhammer Third Edition. What made it so special is that it stood on its own. The campaign was interesting, the rules were simple yet addictive and you got everything in the box you needed to play. With a little effort you could easily invent your own dungeons (and indeed I did, to challenge my sister) and the expansions added a little more flavour to the game.

Many people have said 'why doesn't GW re-do Heroquest?' but my understanding of the situation is that the rights of the game remain with MB games (or whoever owns them) as it was designed by one of their employees. All that GW contributed was the background, the artwork and the miniatures. So sadly, we are unlikely to ever seen a re-release of Heroquest.

Still, there are plenty of copies about out there. I sold bucketloads. 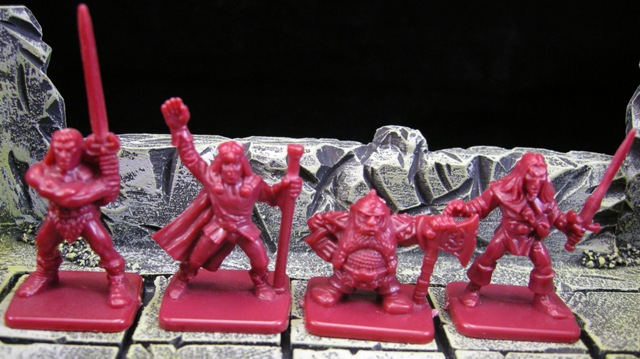 How many hours did I spend pushing these figures around the table? I still think they are fantastic sculpts for early plastic miniatures.

So what makes me think of Heorquest at a time like this? Well, it all comes down to my 'Grand Plan' of having an army for each of the 3rd edition races in 5 years time. Why 5 years? Well, my son will be 7 and I feel that is old enough to play 3rd Edition with me. A game in action. I remember the thrill of opening the doors and entering rooms. What would be in there? Hopefully not the gargoyle!

But what about before? Surely a gateway game such as Heroquest is going to be essential in 'turning my children on' to wargaming in general. After all, my sister really enjoyed the game so my not my daughter too?

With this in mind, I need to add a complete set in very good condition to my list of wants. For a decent price of course! Then I have to paint up all the miniatures (and the furniture) in bright, late 80s McVey style!

Anyone else play this game back in the late 80s/early 90s?

Does anyone else own a nice painted copy they could share some pictures with us?

Before I leave you, I'll share you this video for Youtube. You may well have seen it before but I'd not watched it for twenty plus years so I felt that readers of this blog may well enjoy it too. I found two versions of the clip.

Email ThisBlogThis!Share to TwitterShare to FacebookShare to Pinterest
Labels: Heroquest