Inspiration is a singular thing.

It is sudden, spontaneous, unexpected and, sometimes, downright impulsive. It is also a two way street. Thantsants has recently posted over on his blog detail of his 3rd Edition Orc and Goblin army. A very good read it was as well and I am sad to say that I am more than a little envious of his collection, especially the war machines.

What really caught my interest, however, was not what Thantsants had, but what he didn't have;

Namely, 'wants of a leadish nature'!

Before you deny it (and I know you will if your anything like me), we all have these little wish lists in our head. Late night scourings of eBay do little to relieve the niggling desire to own those castings, only expenditure (or the sure knowledge of spousal disapproval) holds the hand in check. By this I don't mean everyday purchases; the rank and file of 3rd Edition, character models or publications. I mean the 'bobby-dazzlers', the 'dog's-bollocks' and the 'badger's-nadgers'- the BIG acquirements that we all dream we will find for 99p one day, and pat ourselves smugly on the back once the transaction is complete and we're ripping off the bubble wrap!

So what are my wants? What would my killer acquisitions be? I suppose a countdown of my 10 most wanted would be a suitable method of expressing my own dark, deranged lustings for lead! 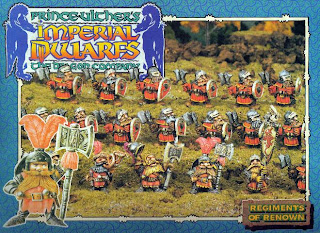 First off are these two lovely box sets. I own all the other second edition run of these regiments but do not own these beauties. I bid and I bid and I bid but I cannot seem to win. Why do I want these beauties? Not only are the two sets practically an army but they are wonderfully sculpted and are very evocative of the era.


9: The Zoat with the Staff

I adore this model. Lovely positioning of the body for an early sculpt. I think that it was a limited edition and have never seen it for sale on eBay or anywhere else for that matter, but I've seen plenty painted up on blogs so they must be out there somewhere!

These turn up regularly, with MASSIVE prices despite that fact that in the game, they're a bit crap! I heard somewhere that Nick Bibby sculpted them as large monsters when really they should have been 28mm, hence the discrepancy with the rules. Still, people love them and I've heard they have turned up again in Storm of Magic. For the completist in me really. Terror in the Darkness was the first roleplay adventure that I ever read. The mighty ambull has stayed with me ever since. One of the few models that crossed between 40k and Warhammer. Not really useful for gaming but a must in any serious collection.

Now were getting down to the sets and miniatures I really, really, really want. This is a must for any undead fan because it is a whole army in a box; troops, horsemen and a chariot. I'd want it on the sprues mind- tell a lie, I'd want two copies; one to build and one to keep mint!

Some time ago I made a startling confession; that I'd never painted an orc. Well to rub salt into that particular wound, I've never painted a dragon either! What's this I hear you cry, a fantasy gamer who hasn't painted an orc or a dragon- is there something wrong with you!? Well, I've painted an orc now but dragons have been left out in the cold. Of all the citadel dragons this one is my favourite. It even came with a little (hopeless) knight to fight it! Wonderfully 80s too!

We can all dream. I dream of having this model painted and ready to lead my Orc and Goblin 3rd Edition army. No many of these about (at least not that I've seen) and I'd probably want it boxed too. I love the way the model is designed; coiling with its talons slashing forwards. Don't like the colour scheme in this image though! I'd paint it red! 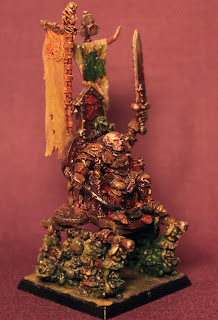 This is the only model on the list that I once owned but I foolishly sold it. I am sure you have similar stories of bad decisions made on eBay. I'd like this kit with all the riders; the one shown in the image above, the Nurgle sorcerer and the 40k rider too. One of my favourite ever models from citadel and I'd love to paint mine up as well as the example given here!

I'm no fan of the Marauder miniatures. To me they typify the chunky hands/clunky weapon style of 4th/5th etc edition Warhammer. Still, the fighters, dwarves and some of the orcs are fantastic sculpts. Towering over them (if you pardon the pun!) looms the Marauder giant. A wonderful, wonderful model! Too me, its pure Warhammer; from the beer keg, the tattered clothes and the Jesus sandals. So many elements of this sculpt appeared in the current plastic GW giant (though it lacks the character) shows its still an influential model today. And, its metal! Imagine how that beast would feel in the hand once painted and based!

Ah! The Holy Grail of citadel miniature collecting. We have all heard the rumours; it sells for thousands, blah, blah, blah. I've seen one for sale on eBay. It had a a reserve price of God knows what but it never reached that. I think bidding stopped at £200. Considering that there was only one on, you'd have thought our fellow lead fanatics would have been whipped up into a frenzy. Hopefully, one day I'll get my hands on this kit and do it justice with original citadel paints; despite the fact to no background or rules were ever released for it.

Well, here is my wishlist of lead wants. Do you own any of these beauties? Or do you too lust after these lead lumps?

Or perhaps you have your own wishlist of citadel miniatures?

If so, I'd love to hear from you! After all, as I said at the the beginning of this post, inspiration is a two way street.