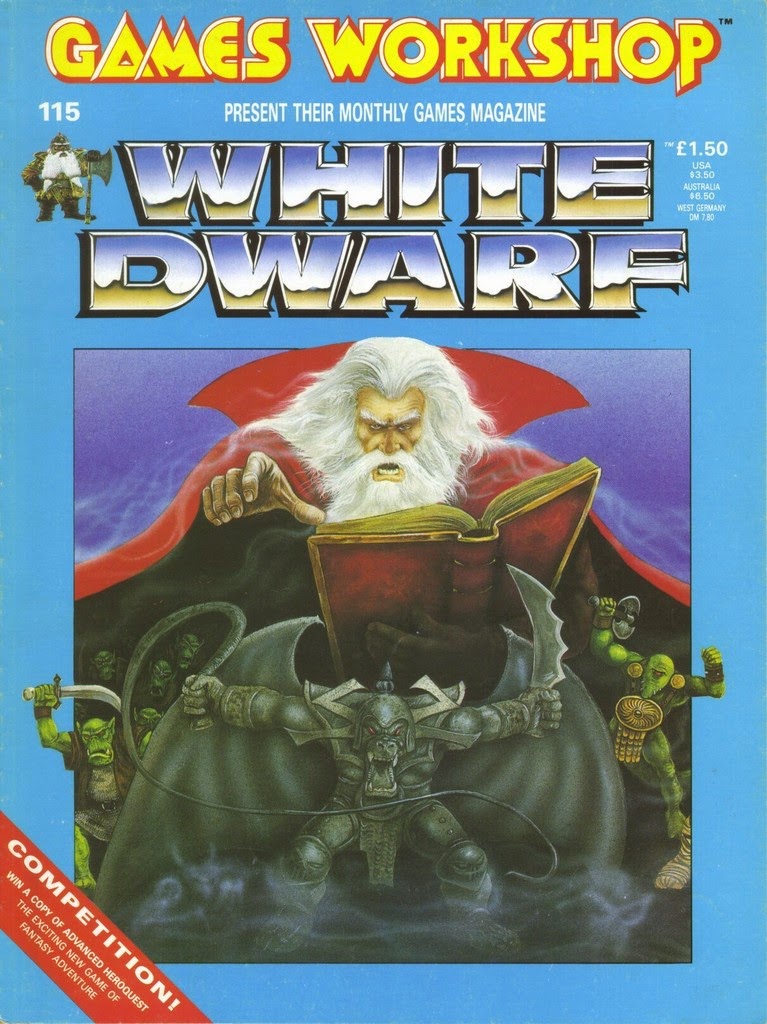 In the last few posts we have been exploring the releases and articles from White Dwarf 115. As we have learnt, this was to be a very important issue in terms of the Warhammer Mythos as it contained the release materials for Heroquest, as well as a taster of Advanced Heroquest.

I doubt that no other game has ever allowed so many young gamers to cut their teeth on a miniature fantasy game, and I seriously doubt that another one ever will. Heroquest transcended Games Workshop, Warhammer and the Fighting Fantasy crowd to become a game that all the other kids seem to play too.

In that issue, just like every other at that time, were the fabulous 'Eavy Metal pages. These were always my first port of call when I bought the magazine each month, largely because it was one of the few ways of actually seeing the miniatures that Citadel have produced in the past with a catalogue and, of course, due to the fact that they were all expertly painted.

As a youth, I would spend hours gazing over the paint jobs wondering why I couldn't get my goblin to look like the one Darren Matthews painted. In fact, I still do, especially over Ivan Bartlett's Nurgle Beastman. Hey, there is a funny concept isn't it? Actually being able to recognise a particular painter's work just by looking at it - no generic techniques or colour schemes here. Such was the amount of time I spent gazing at these painted models I began to recognise each of the 'Eavy Metal painter's hand in the models. Could something like that be said for today's models? 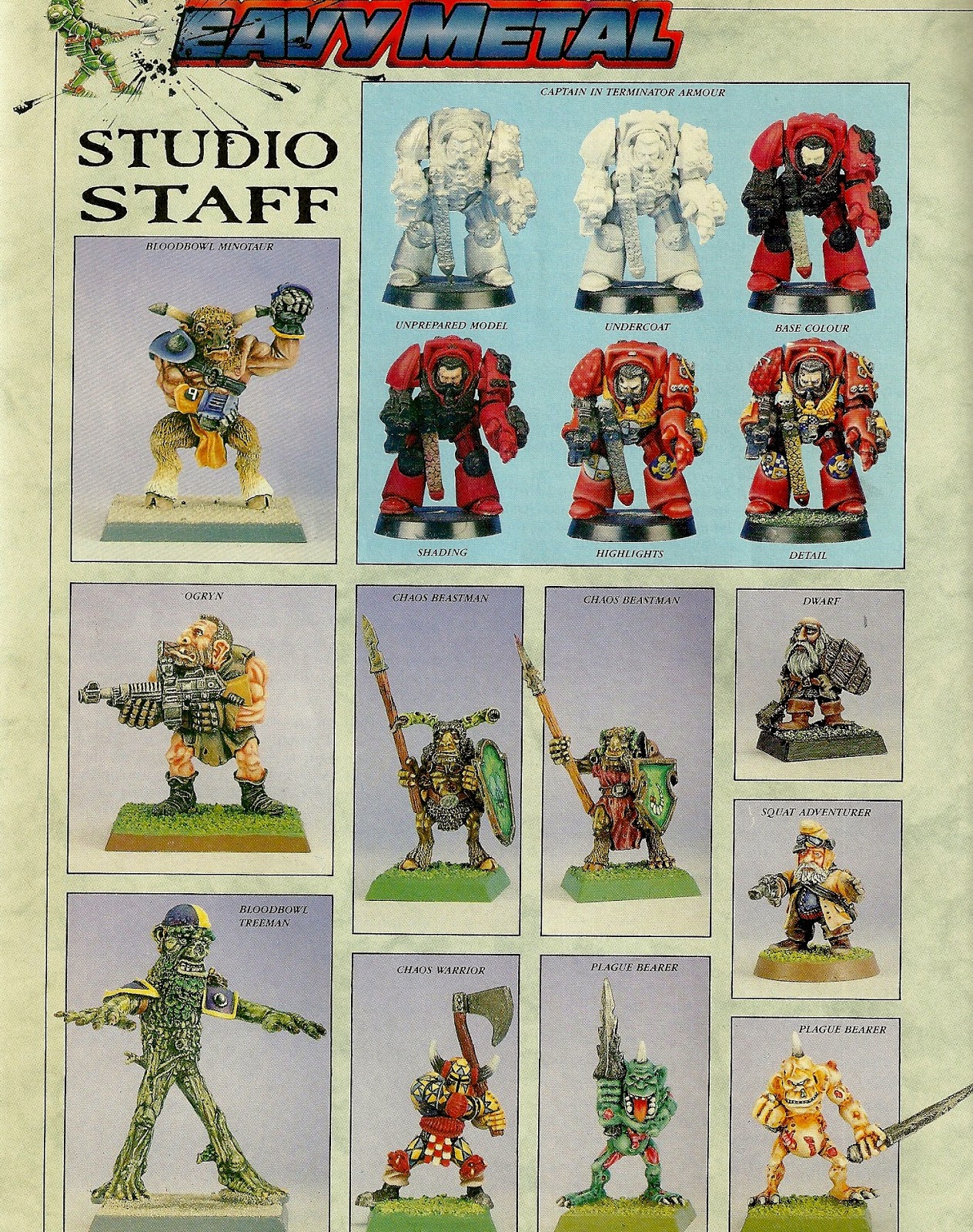 Some nice examples of late '80s Citadel reside on this first page. The two plaguebearers on the bottom row were at the Oldhammer Weekend at the Foundry last summer. Incidentily, the green one was painted by Oldhammer's own Andy Craig! The colours used are bright and brash and certainly don't have any of the dirty brown monotony of many a more recent plagebearer paint job. The treeman to their left also follows this rather bright approach with a lovely green tone over much of the body. The blue and yellow really offset this and make for an attractive figure. Bartlett's Nurgle beastmen, complete with excellent shields, reside centre stage and just go to show that decent finishes can be made of Olley's sculpts for this period - something that I must admit I have struggled with in the past. The we have two dwarfs, an old classic with the shield and axe and a more modern (well, then anyway) Squat Adventurer, which I am not sure ever saw a release. Anyone know? The chaos warrior on the bottom row is a bit of an enigma too, and I a pretty certain that this model never saw release either, though I have long suspected that it may be a conversion. Mike Mcvey's hand can be seen in the brilliantly blended Bloodbowl minotaur too. 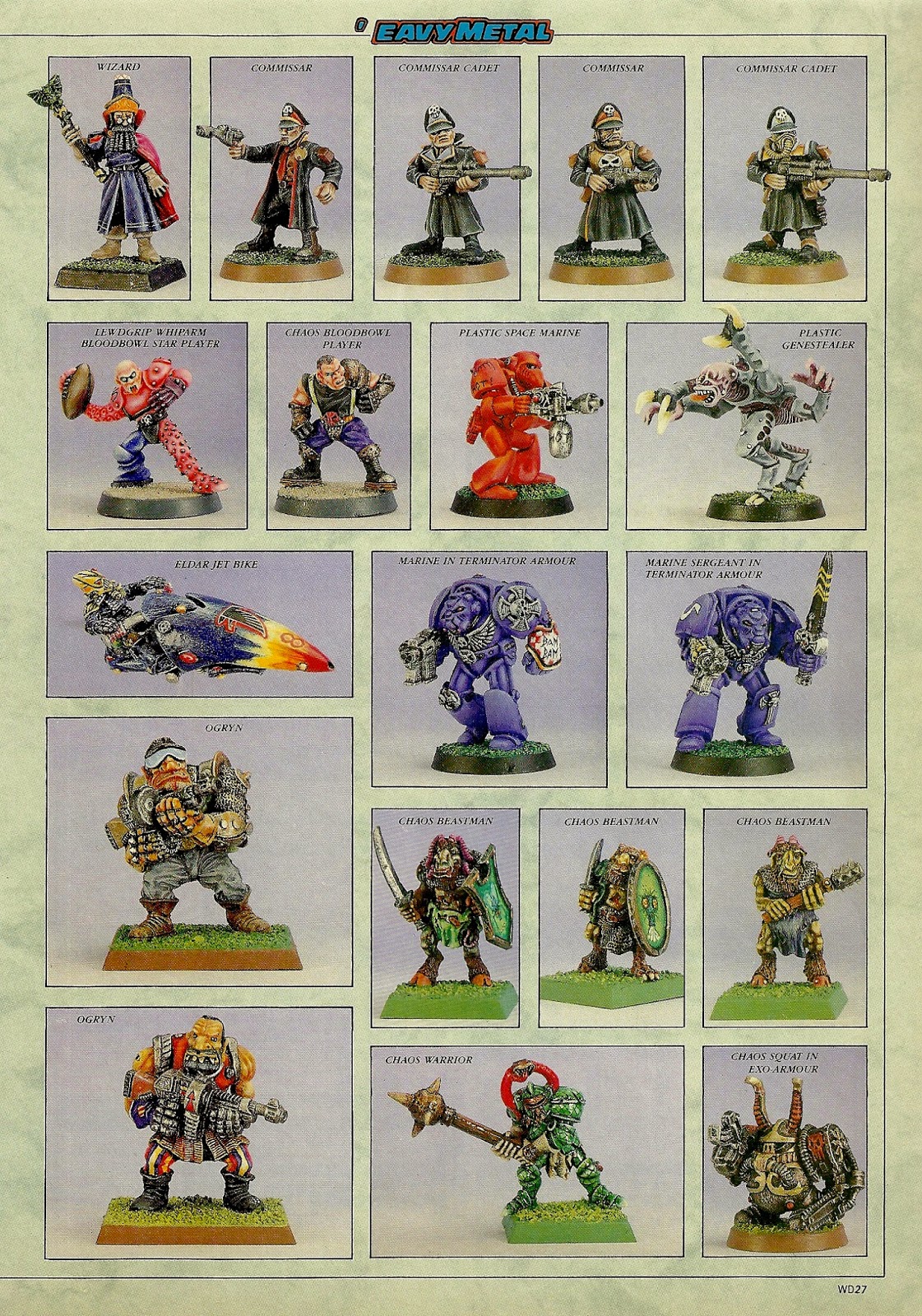 More from Andy Craig here, with Lewdwhip the Bloodbowl star player, which can be found in a later issue as a stage by stage, similar to the terminator captain on the previous page. More of Ivan's chaos beastmen appear here too and make you wonder why they were all included on the same page! What strikes me here is the huge variation in painting ability. The intricate painting of Bartlett can be found alongside some pretty basic stuff (like the bottom row Ogryn) but all were deemed 'good enough' for White Dwarf! This always encouraged me, as my wild daubings didn't seem so bad when compared so some of these models. 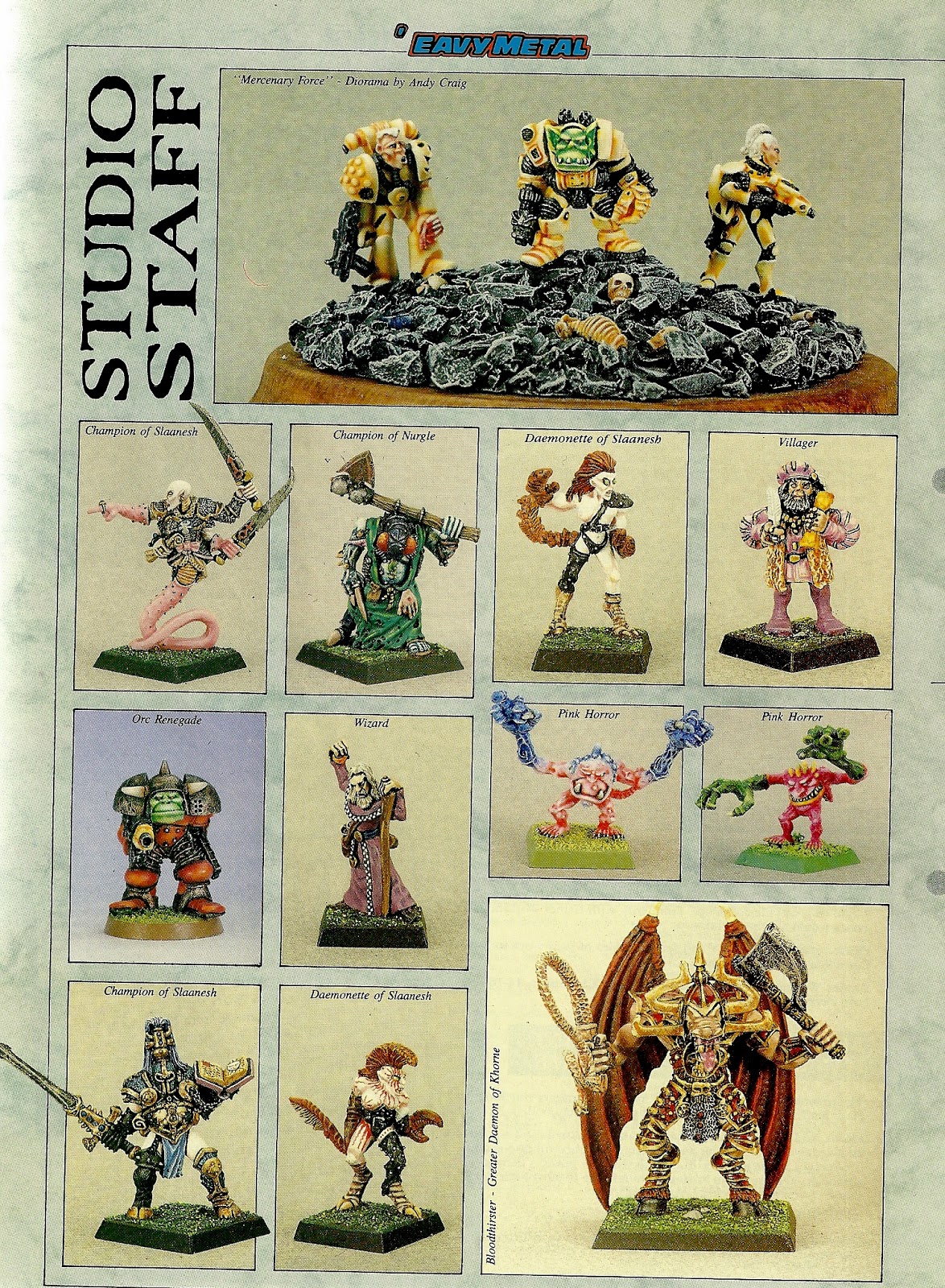 Andy Craig's diorama at the top of this article is now very well known and would have been his entry into the next Golden Demon competition had he not become employed by GW before it could be entered. There is some truly inspiring chaos work here; particularly the two tone Horrors of Tzeenth that are just begging to have their colour schemes stolen by one of us in the near future. Keen eyed basing fans will notice that my own classic basing style was inspired by many of the models you see here, notably the chaos champions and daemons above. Yet the dark green bases are published alongside the more traditional goblin green jobs and a rather modern looking base on that Bloodthirster. 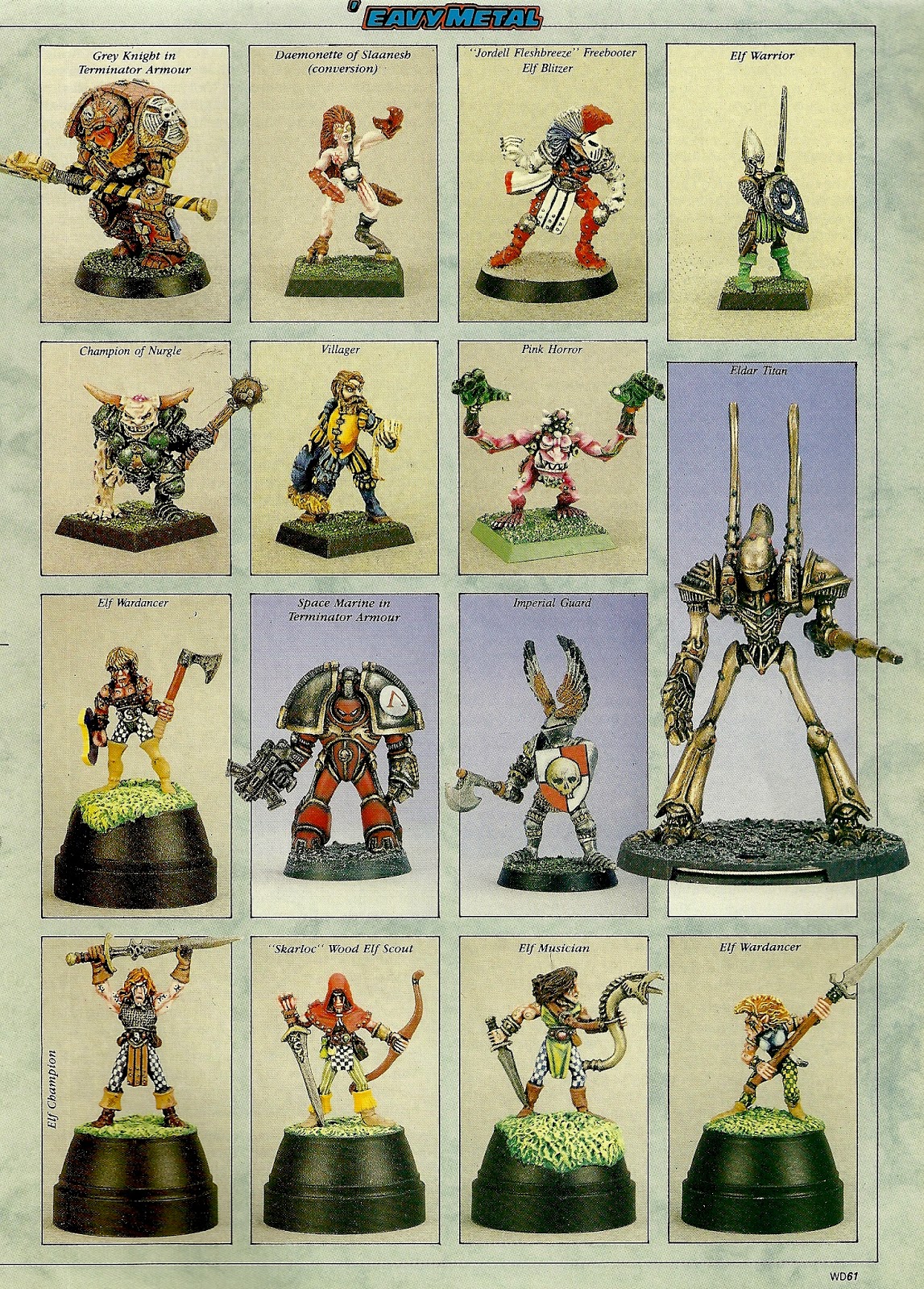 The final page of Studio staff stuff from this issue has a rather eclectic selection. Bloodbowl, chaos, elves (including those remarkable Skarlocs) with the addition of a random villager (very nicely painted, mind) as well as a mark one terminator and a beautifully designed Eldar titan. And to think, all this creativity was less than five years old! Yet more was to come!

So, do you have a favourite piece here?