The Enemy Within: Shadows Over Bogenhafen Character Miniatures

Having just finished a small group of elves as part of my Warhammer Bestiary project, I am keen to start another painting challenge. Of course, I could just get cracking on the Fimir which is next in line, and well I might, if it hadn't been for the sudden arrival of Johann in the post. As you can see from the image above, I now have the full set of the Enemy Within characters (Shadows Over Bogenhafen) to get painting with.

However, as I was preparing the models lots of questions started rearing their leaden heads. This got me thinking about the oddities that can be learnt from looking at ranges of models as you go about collecting them. So, what can we learn about this little band of mid '80s adventurers? 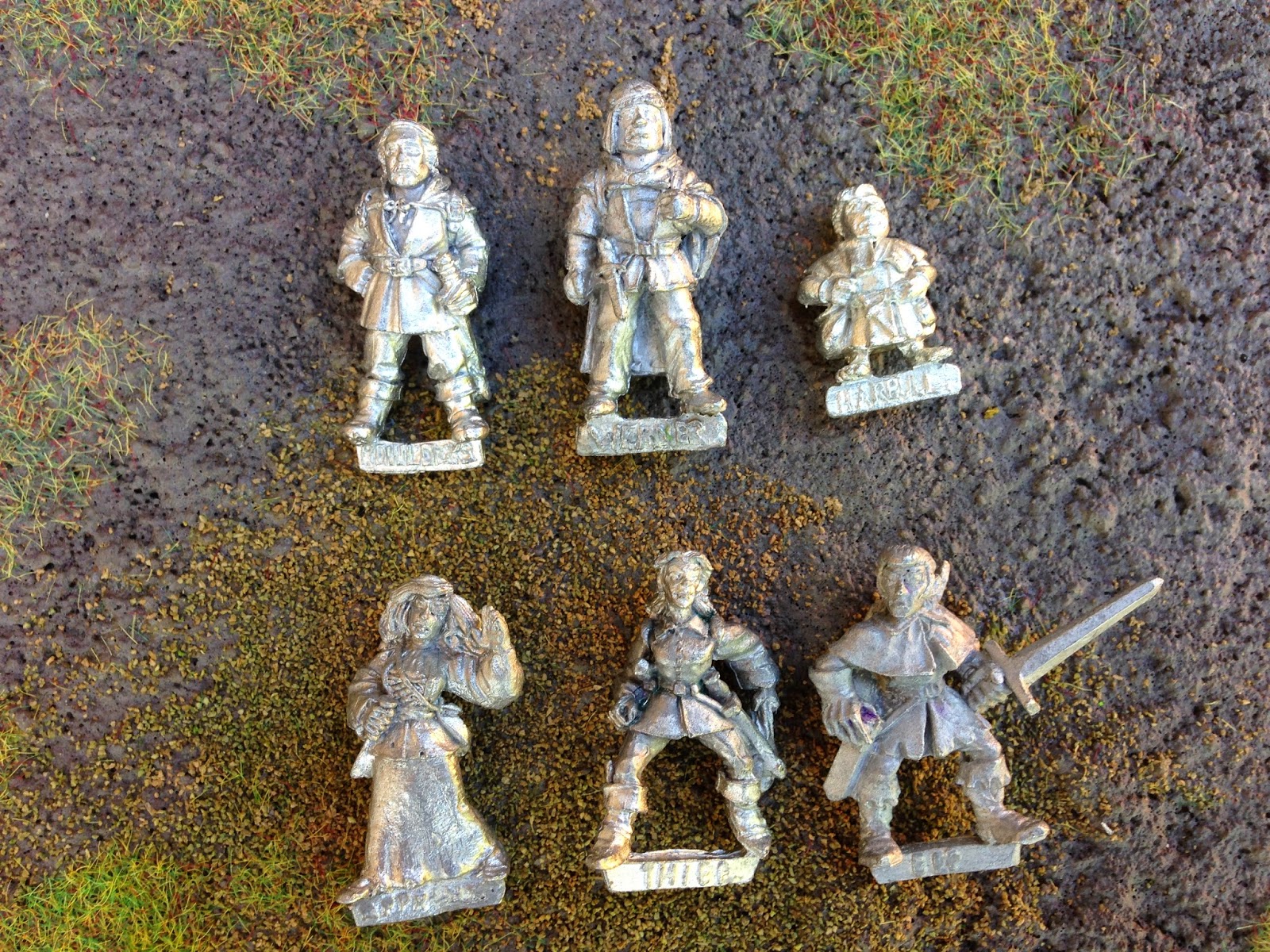 Here they are. Quite an expensive lot if I put them on eBay I suspect. In fact, these models are some of the most expensive I have ever bought. As you will know, I am a £4 man when it comes to the price of the average miniature but it didn't pay any more than £17 for any of these models, and some I got for much, much less. Looking at them here they seem rather unremarkable, but if we look closer things become a little more interesting. 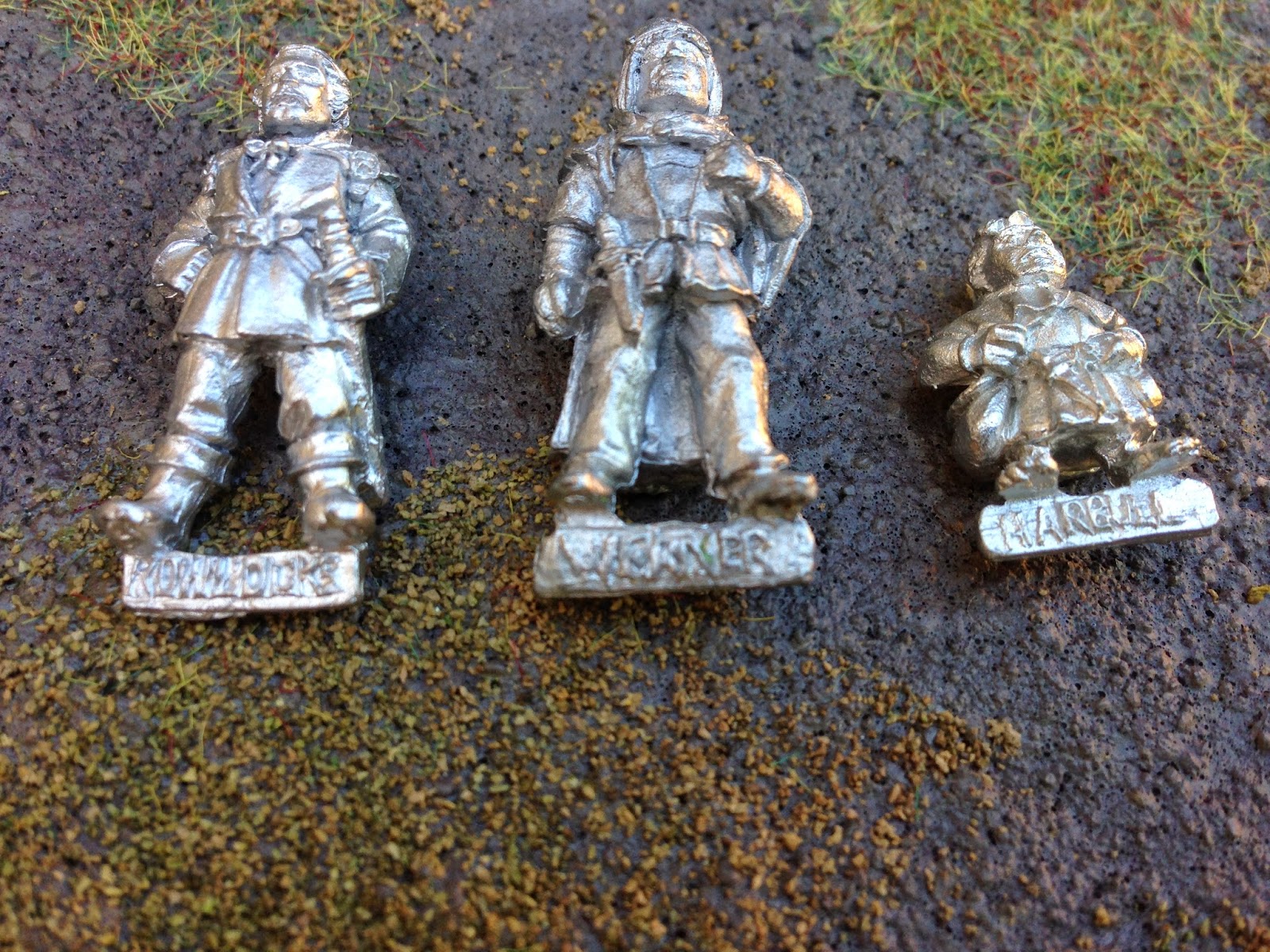 Johann, named 'Rowlocks' on the tab, Weiner and Harbull, to me anyway, all seem to share a design that make me feel that they were produced at the same time by the same person. Of course, I have no proof of this and I maybe wrong but I feel pretty confident that this is the case. 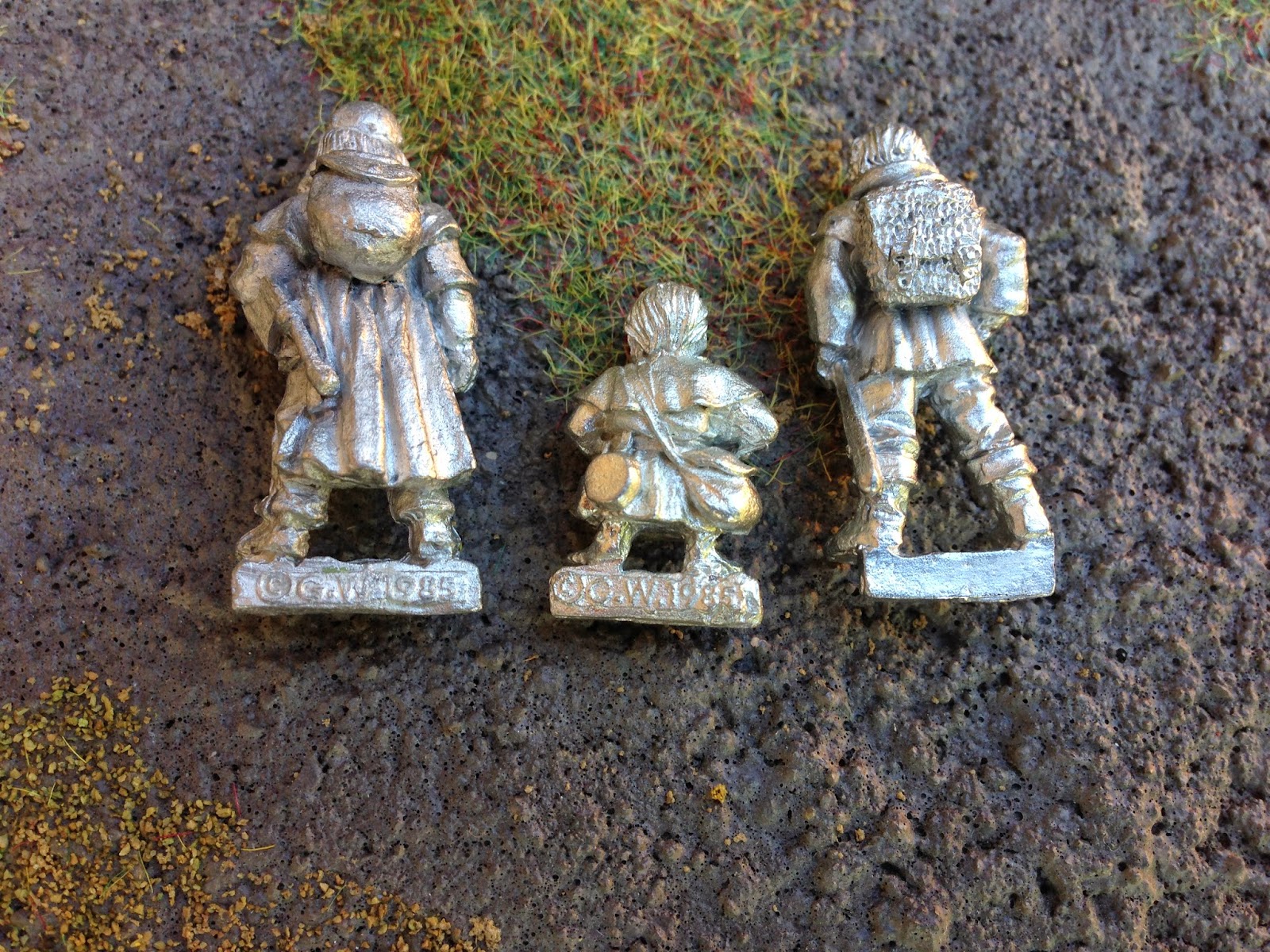 Flipping the miniatures over shows us that two of them were designed in 1985, according to the date stamp on the tab. Though Johann is undated. 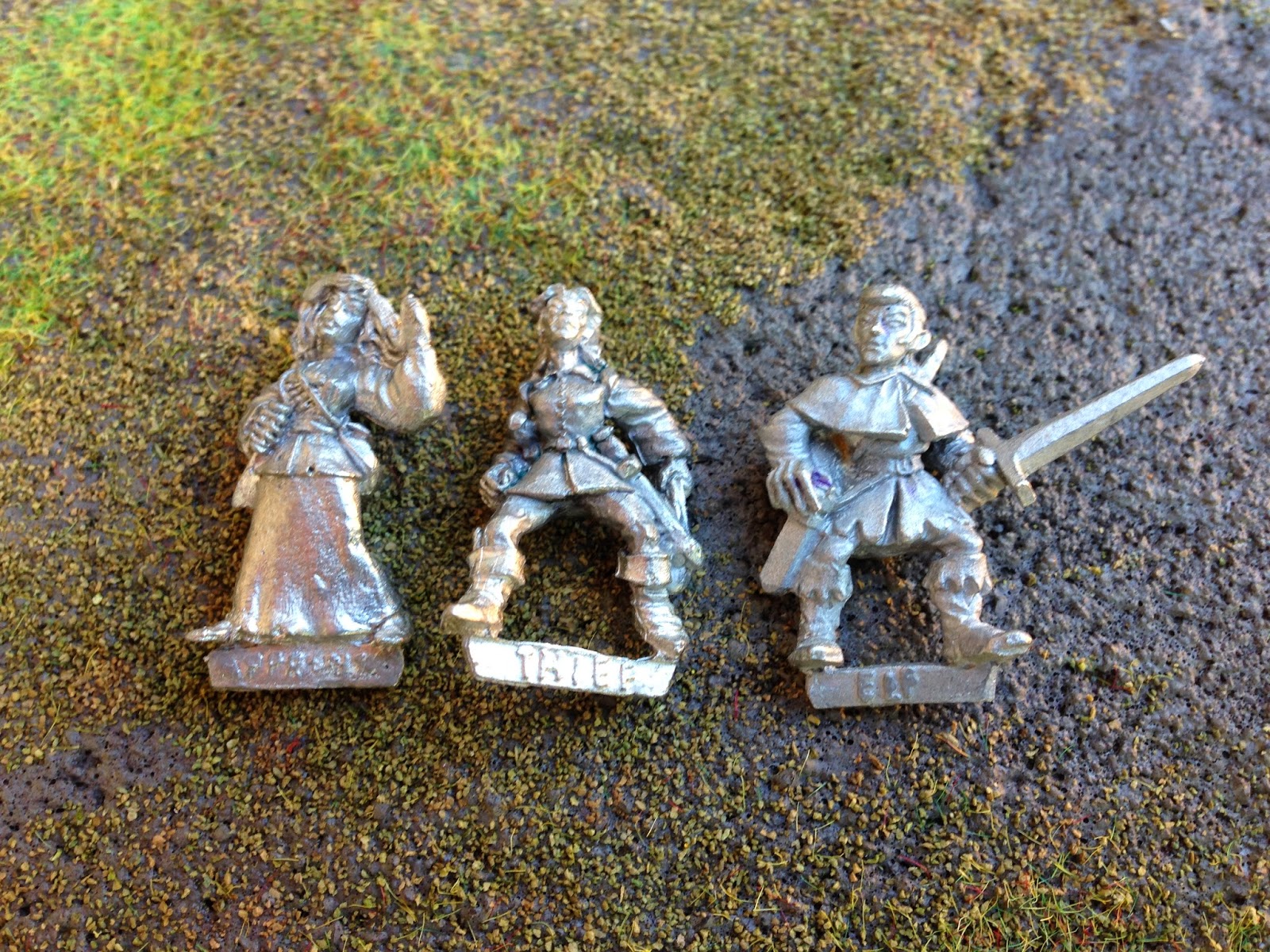 Now you would imagine that the other three models in the range would share a common look wouldn't you? After all, it makes sense that all of the characters would have been put into miniature form at the same time. A quick look at Wanda , Kirsten and Malmir makes me think otherwise. The design 'feel' of these three models is not as consistent as the first three, is it? 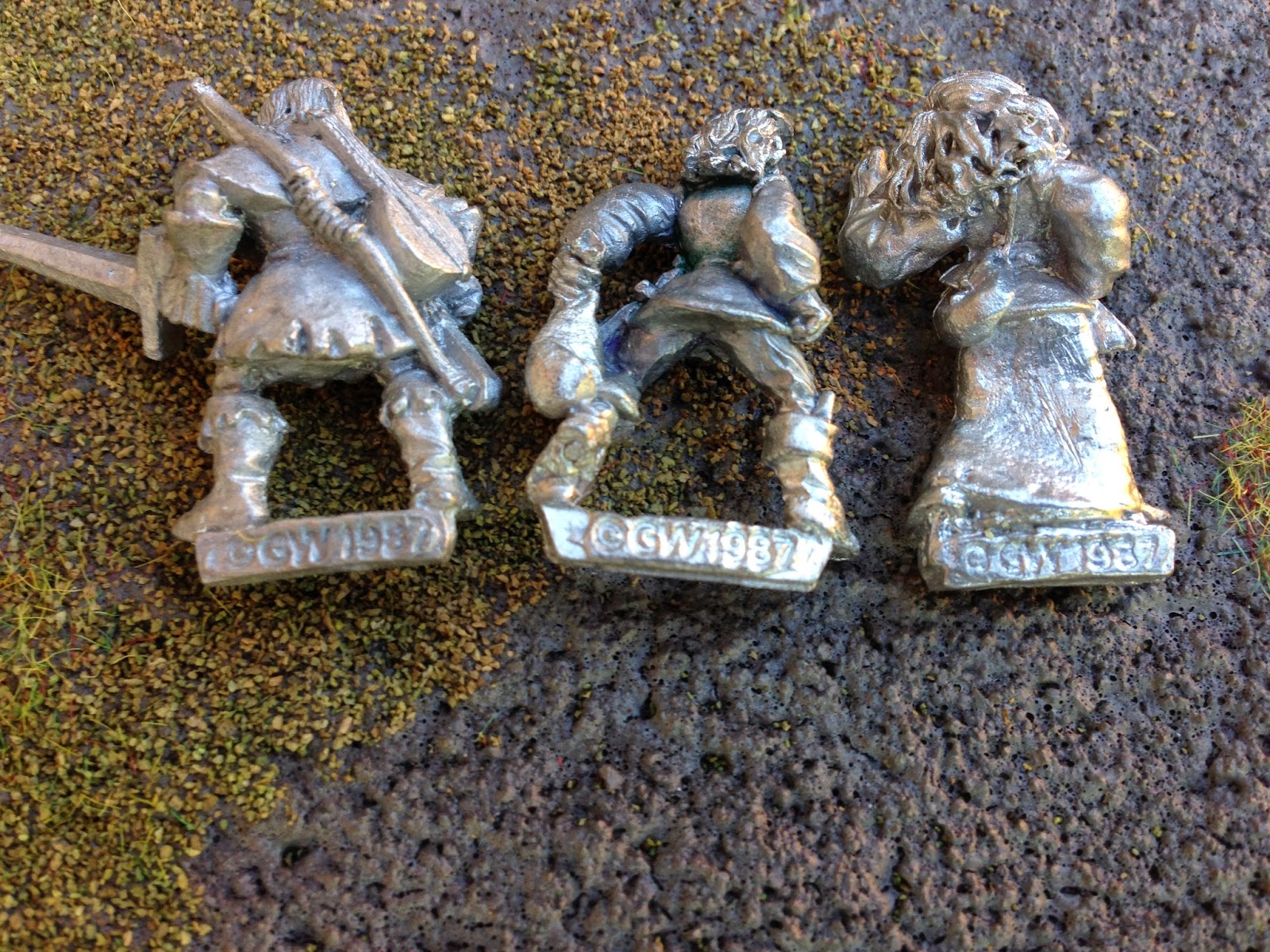 Flipping the miniatures reveals that these three models were designed in 1987. Two years after the the original three! Is it just me that sees this as rather odd? After all, why would you create three models in support of the Enemy Within and then wait another two years to produce the rest? Additionally, Wanda and Kirsten were not originally intended for the Enemy Within, but are part of the Townsfolk/Villagers range of 1987. Malmir appears in the standard Elf range too. 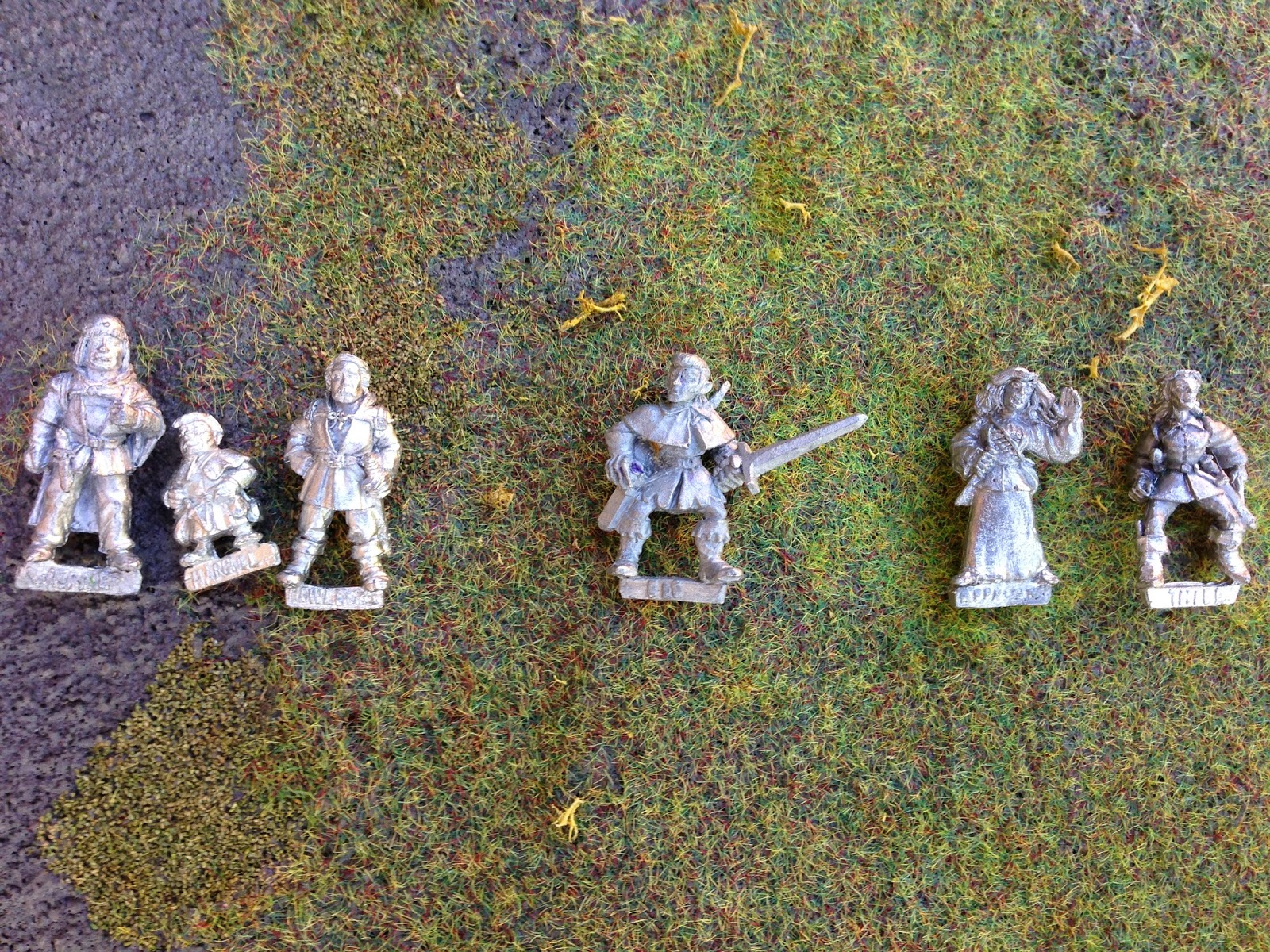 Actually, Malmir is an interesting model when looked at in context. He is a lot more chunky than the other models and has a distinct Marauder feel about him. Hardly the elfin troubadour, more like a bloke who works on the roads! As an aside, Malmir also has a distinct Elvis look about him. I think it might be his sideburns. If you look at the picture above, you can see how I have sorted the models in respect of style. Malmir is very much on his own. 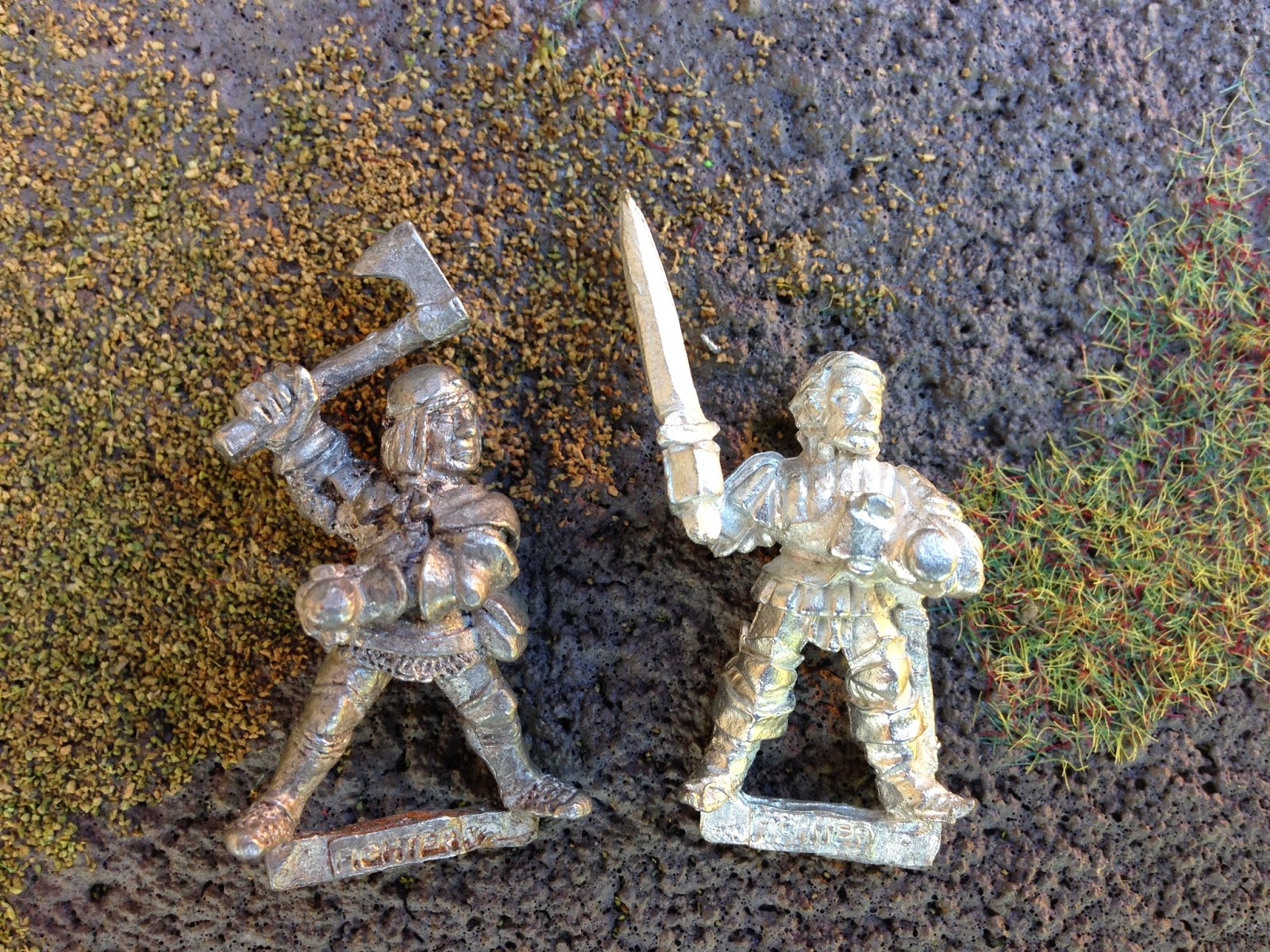 Now, before some of you hardened Citadel Collectors start pointing it out, there was a later, Death on the Reik set of adventurer figures. This range had new sculpts for Weiner and Johann but the models were stamped as part of the Fighters range. Now, I suspect that these were conversions of pre-existing models with a new head, though I have discounted the possibility of that process just being a had swap due to subtle differences on the two models. 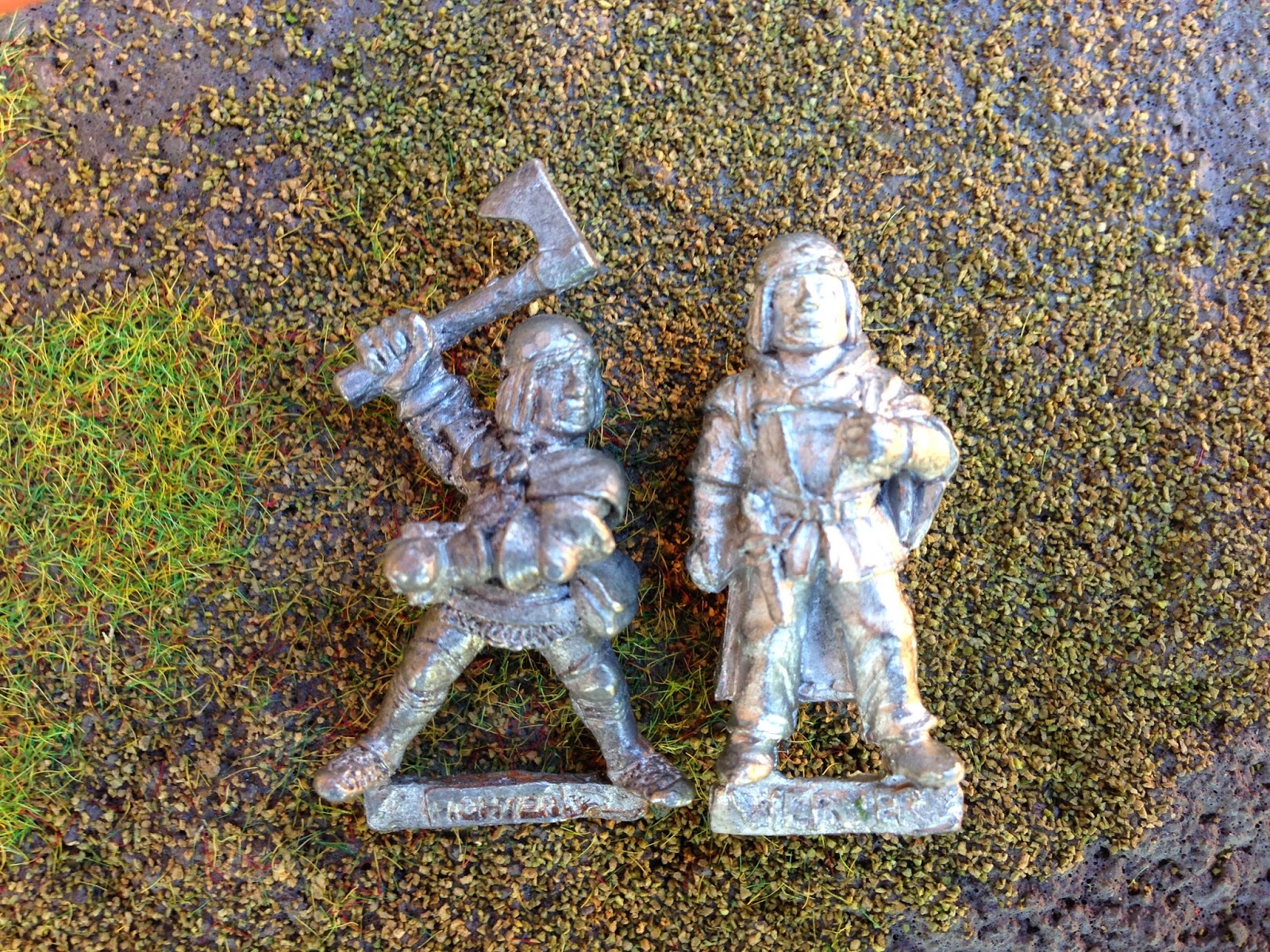 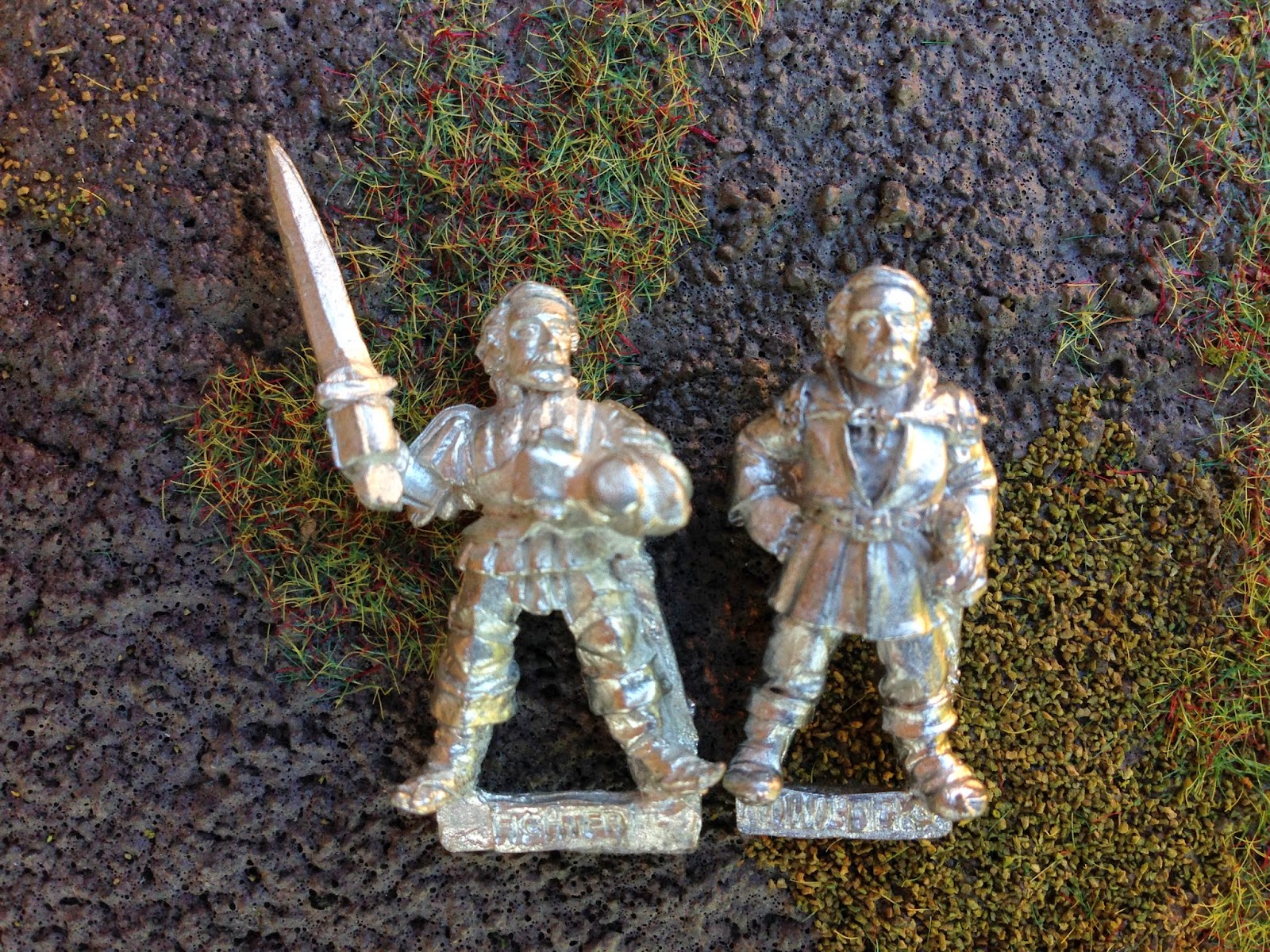 The differences are even more pronounced on the Johann model, as you can see from this picture. Its clearly a resculpted head. 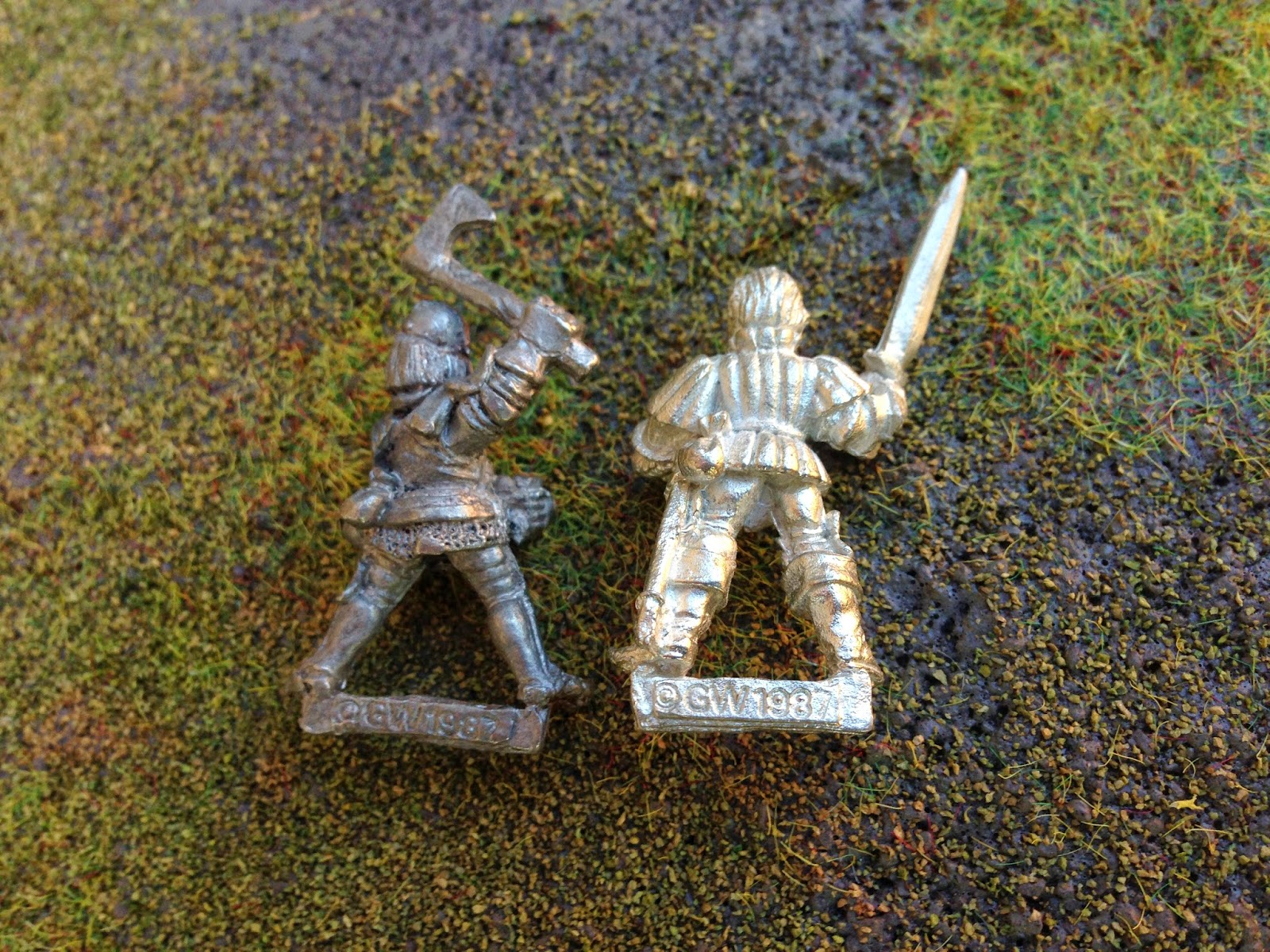 And the dates? Yes you guessed it, 1987! Roughly around the same time that the villagers were made and the original Shadows set was released, not to mention the Death on the Reik set.

This leaves me with one question. Were there originally other models for Malmir, Wanda and Kirsten? Are they waiting to be found by Steve Casey amongst the vast hordes of Bryan Ansell's collection? Could they be part of the 'not good enough to be released' box that the Citadel Collector often tempts us with?

The answer isn't as important as the fact that I will leave you with. Sometimes the actual collecting of a range or set can produce some intriguing puzzles and questions. Have you ever noticed anything strange among your own collections?

If you have, then I would love to hear about what you have discovered!

Email ThisBlogThis!Share to TwitterShare to FacebookShare to Pinterest
Labels: Collecting Miniatures, Enemy Within, Shadows Over Bogenhafen