The Crude, the Mad and the Rusty Ride Again!

I have been busy over the last day or so completing this group of models. Well, I say completing -three of these were already painted before I started and have only seen mild touch ups (steady Chico!) while the remaining three have been painted from scratch. Can you work out which ones?

Skrag the Slaughterer is the oldest painted model here having been completed by me way back in 2012. He has been rebased for this little collection and his armour has seen a tiny sort out here and there too. Oxy and the Tinman were completed quite recently and you might well have read the post I did about them a few months back. The two chaos goblins, Blood and Gore, were finished off today, along with the wonderfully named Spikes Harvey Wotan.

I think I explained then that Oxy and the Tinman, though an '80s Limited Edition blister pack, were also connected with a little known Warhammer scenario published in White Dwarf '88: The Crude, The Mad and the Rusty. 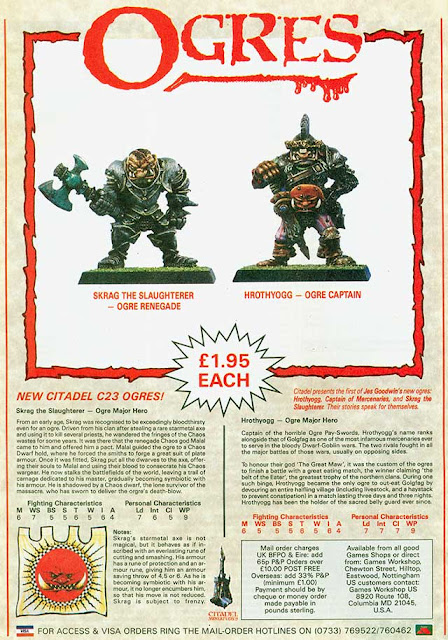 Like a career criminal (which he may well be, incidentally) Skrag the Slaughterer has a fair bit of previous, as can be seen in the advert atop. Here he is advertising his wares in White Dwarf 79 alongside the scrabble friendly Lovecraftian, Hrothyogg. Interestingly, this advertisement is one of the few published references to our old friend Malal and here the renegade god lures Skrag towards a lump of starmetal and encourages his to persuade some dwarfs to forge it into a giant axe. Great fun!

I often wonder if the success of these models lead to Jes Goodwin's incredible range of ogres a little later on, as it seems odd to have an entire range produced and then do a colour ad for just two of them! 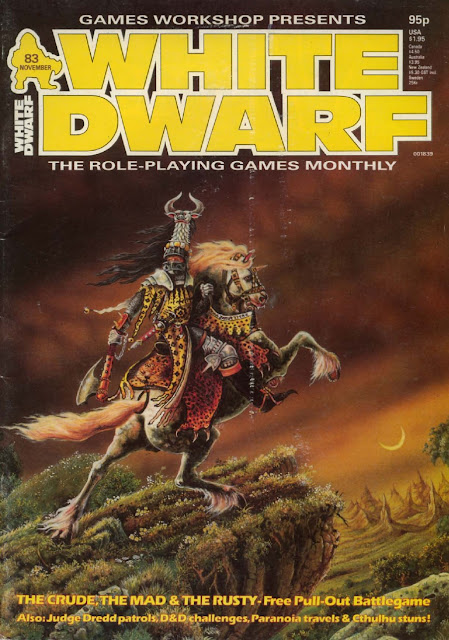 Anyway, back to the plot. White Dwarf 83 boasted a 'Free Pull-Out Battlegame' on it's front cover and the prospect of fighting a Fantasy Battle straight out of the magazine probably sounded very exciting for a large number of readers. However, delving into the pages of White Dwarf that month would lead to a strange disappointment, for this was not a battlegame of massed ranks, brutal charges and the ebb and flow of combat - no - it was a few paper cut outs being manipulated around perhaps the worst full colour poster ever printed anywhere in the 1980s. Jump the bottom of this article if you do not believe me!! 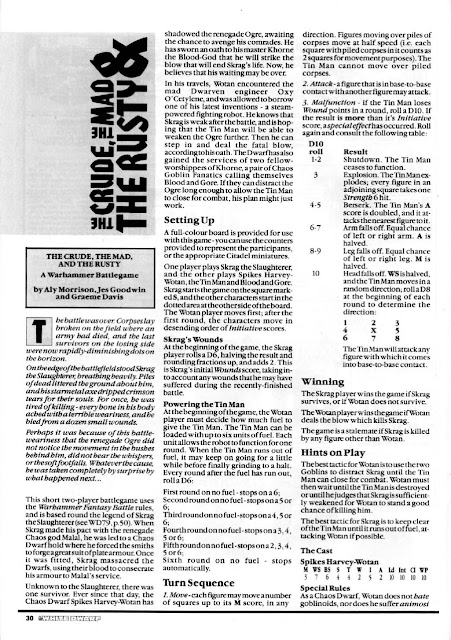 It is a well known fact that you cannot polish a turd. And some have accused the Crude, the Mad and the Rusty of being an absolute clunker of a poo sticking to the toilet bowl of wargaming life. They have lain it upon the altar of poor gaming releases (probably alongside Gary Morley's Nagash) and wished it to the pits of non-existence forever.

I don't agree with them. For there is material enough over the supplement's few pages to polish up a gem of a scenario - if you are prepared to do a little work.

Reading the story helps understand the scenario a little better. After wandering the wastes and being seduced (if that is the right verb for a huge, sweating ogre) by Malal, Skrag locates the starmetal and forces a bunch of dwarfs to craft the ore into his gigantic axe, and make him a huge suit of armour to boot. In thanks for all of their hard work, Skrag promptly slaughters (yes, that is why he is called that) the lot of them and consecrates his new found weapon in their blood. Charming chap!

Unfortunately for Skrag, he leaves a single witness. A solitary Khornate chaos dwarf by the name of Spikes Harvey Wotan (whether this character is inspired by the chap who appears in Judge Dredd's Cursed Earth series, which included Ronald McDonald executing customers for spillages, has yet to be decided) who, rather understandably, swears an oath to track down and kill Skrag in vengeance. During his travels, Spikes meets another crazed dwarf, Oxy O'cetylene, and persuades him to construct a deadly tinman to take on the Slaugheter one on one and picks up two Khorne worshipping chaos goblins named Blood and Gore along the way.

So far so good really. It is wacky, zany stuff just like Warhammer should be. Once you start looking at the rules it all starts to fall to pieces, a bit like if the scenario was written on the back of a fag packet after a particularly boozy lunch one Friday afternoon. Things start well, with a D6 roll to determine Skrag's initial wounds, halving the result and adding 2. This makes sense in several ways, firstly to add a random factor to help vary the way the game is played (it is obviously trying to be one of those quick scenarios you might play through more than once) and secondly to represent the damage done to Skrag during his dwarf rumble earlier on.

However, once the rules for the Tinman are introduced things start to unravel quickly. The table describing what happens to the machine once the fuel runs out is great fun, and introduces a little more random fun to the proceedings. It states that the player needs to decide how much fuel to give the Tinman at the start of the game, up to six units with each unit providing enough energy for one turn, but no reason for this choice is given, nor does it seem to make a difference how many units you choose to use! In that case, every player will always choose 6 units as it is the maximum available and gives you the best chance of killing Skrag. Surely, there should be a penalty for adding more fuel to create a little tactical thought before hand?

So there is work to be done there! 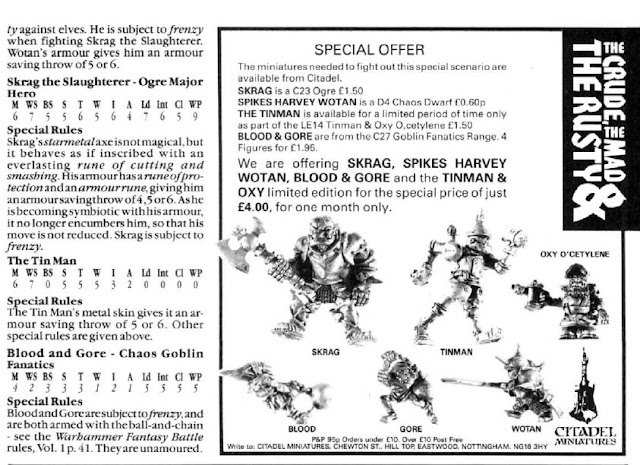 The second issue that raises it's head is the total lack of Oxy in the game. Why include him in the backstory and provide a miniature for him and not include him somehow? This looks to me to be a terrible oversight and one that needs to be corrected.

Casting your eye over the malfunction rules helps restore faith in the scenario. Again, they are zany, fun and suitably random as all '80s roll charts have to be. I also like the character trait of Wotan's, though it isn't very Khornate at all, of using your underlings to soften up Skrag so you can move in for the kill! In fact, that is the ONLY way of winning the game if you are the chaos dwarf player. You have to time your attacks perfectly and kill Skrag yourself if you wish to emerge from the battlefield victorious. Anyone else doing so will put the game into a draw. For Skrag to win, he just has to survive and kill anything that is foolish enough to come at him.

Also, nearly every character is subject to frenzy! Ahhh!

As I said earlier, the 'battlegame' came with a pull-out battlemap and it is certainly 'interesting' on the eyes looking at it now. 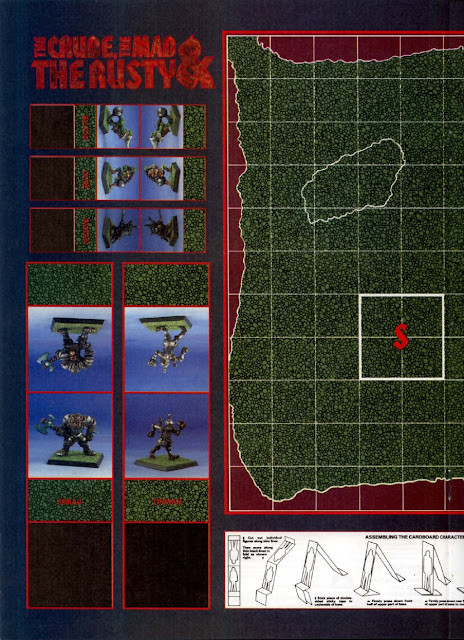 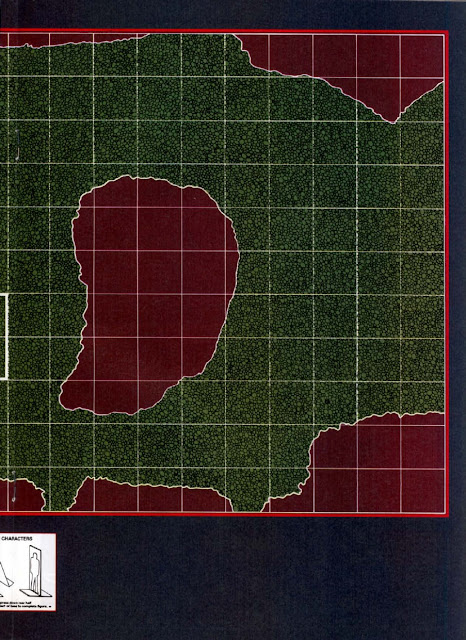 Still, having now collected all of the figures in this small scenario set and got them painted, this scenario offers something quite intriguing to the Oldhammer player. Could the rules be tweaked to produce a more workable game AND somehow include a way of including Oxy O'Cetylene? I like to think so, and it is something I intend of thrash out in the coming weeks. So, hopefully you will see a battle report based on this game coming your way soon.

Does anyone have any advice or ideas to help me on my quest? Or even better, have your actually played this scenario before and can offer some tips on play before I start?

I am ever hopeful.

Email ThisBlogThis!Share to TwitterShare to FacebookShare to Pinterest
Labels: Painted Miniatures, The Crude the Mad and the Rusty, White Dwarf 83