A Tale of Four (Oldhammer) Gamers: Part One

Some of you may well remember with fondness the seminal 'Tale of Four Gamers' series published in White Dwarf some years previously. I cannot quite remember when, and I am sure there are readers out there better informed on this period, exactly these went out, but I do recall some rather poor later attempts to create the same magic, when prices of miniatures were far higher and the word limit in the magazine was far, far lower!

Well, four of us Oldhammer old timers have got together in an attempt to do something similar on the blogosphere, with the intention of meeting up at next year's Oldhammer Weekend for a four way 'clash of the titans' between the forces we create.

My fellow conspirators are: Chico Danks (Oldhammer on a Budget), Steve Casey (Eldritch Epistles) and Warlord Paul (The Black Hole).

Now the rules are very, very simple. They have to be, as I am taking part! The force you build must not exceed 1000pts and you need to write about your endeavours at least ONCE a month, attempting to spend (roughly) one hundred points every 30 odd days. The ruleset we selected was (of course) Warhammer Third Edition and its associated supplements.

Initially, I thought of doing an Orc and Goblin force, as it would tie in quite nicely for the miniatures that I am putting together for Glen Woe, but the idea of being stuck painting the same types of models for weeks on end put me off that track. I need to have variation in my painting life (which is why I have so enjoyed doing McDeath) otherwise things grind to a halt.

My next thought was a Tzeentch force. This blog was born out of my desire to create a large Third Edition army for all four powers, and I have a Khorne and Slaanesh aplenty, so attempting an additional chaos power seemed obvious. After getting hold of the Lost and the Damned and flicking through its blasphemous pages, I realised that my hefty collection of lead better represented the forces of Nurgle. There was also create variation of model types in this list.

So Nurgle it is.

Reading through the armylist led me towards this rather random tool. It's a D1000 chart to create an instant champion of Nurgle, and should provide a quick, and easy, way of creating the leader of my army. As with all things chaotic, some rolls would be far better than others, but I am committed to sticking to what the dice gods allow and doing any necessary conversion work. The cost for each champion is 100pts.

I have included the chart (it's three pages long) below. Right, let's roll... 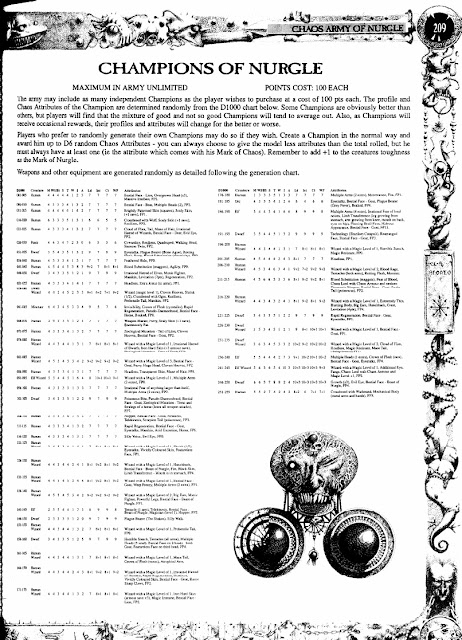 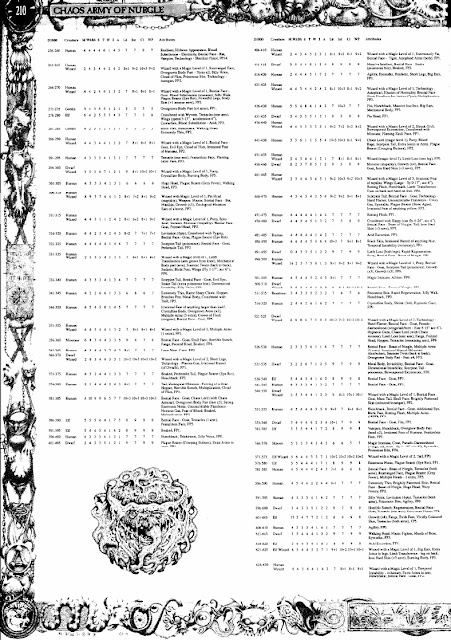 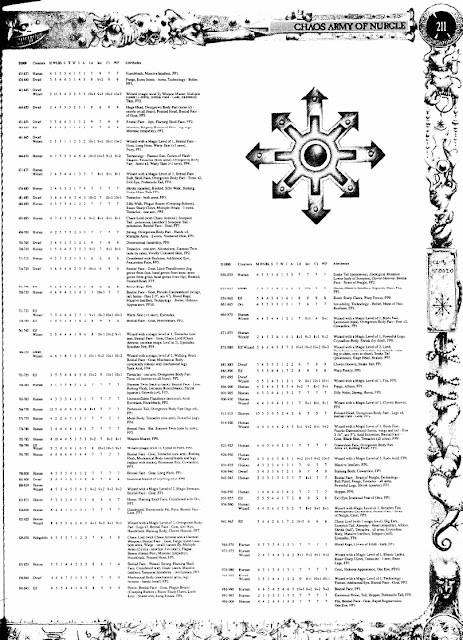 So I rolled 15. Not particularly high considering the possibilities, but there you go. I haven't checked what that means yet and I am feeling curiously nervous as I reach across the table and pick up the book...

Not too bad I suppose, but hardly the stuff of legends is he? But it's a starting point. His two attributes will be fairly simple to paint directly onto the skin too, though I am not sure about applying squares to the skin - but we shall see.

Onto the equipment then. 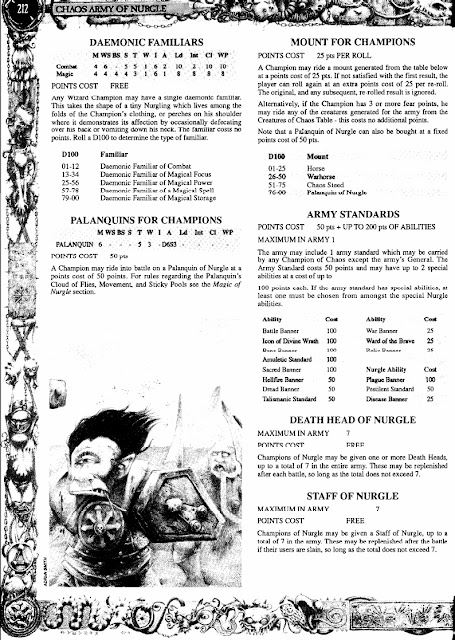 Our Nurgle champion is most definitely NOT a wizard, so no familiar seems justified, nor is he powerful enough to be granted a palanquin surely? Again, I will let the whims of the dice gods decide what his mount is to be by rolling on the chart above. Each roll is going to cost me 25pts.

I get 74. So its a chaos steed. I don't have access to an Army Standard as this character is the general but I shall pick up my FREE Death Head of Nurgle and Staff of Nurgle here. 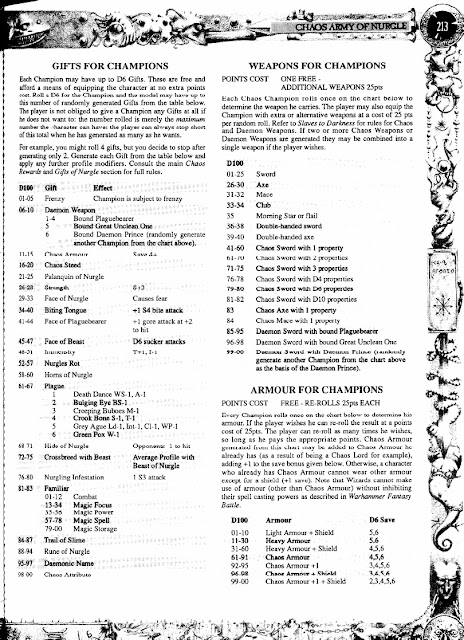 Next up are the gifts, again these are FREE, and I managed a respectable 5 on my D6. So 5 gifts my human shall receive. Again, I am nervous...

A pretty good start, but I am frustrated by the loss of strength and toughness, meaning my stats are even more basic now. Hardly a great champion, eh? But with the addition of the Palanquin, I at least can pass the chaos steed to an underlining who actually can do some serious fighting!

No need for a weapon as he has the daemon blade instead. So on to armour, which costs 25pts a roll. Let's see what he gets on a D100. Well, with a 63 it's chaos armour, which I am pleased about as he only has a single wound and poor fighting skills. So he has a saving throw of a 4+.

Right then, by the end of September I need to have completed this champion model to meet my required output for the month.

I better get started!