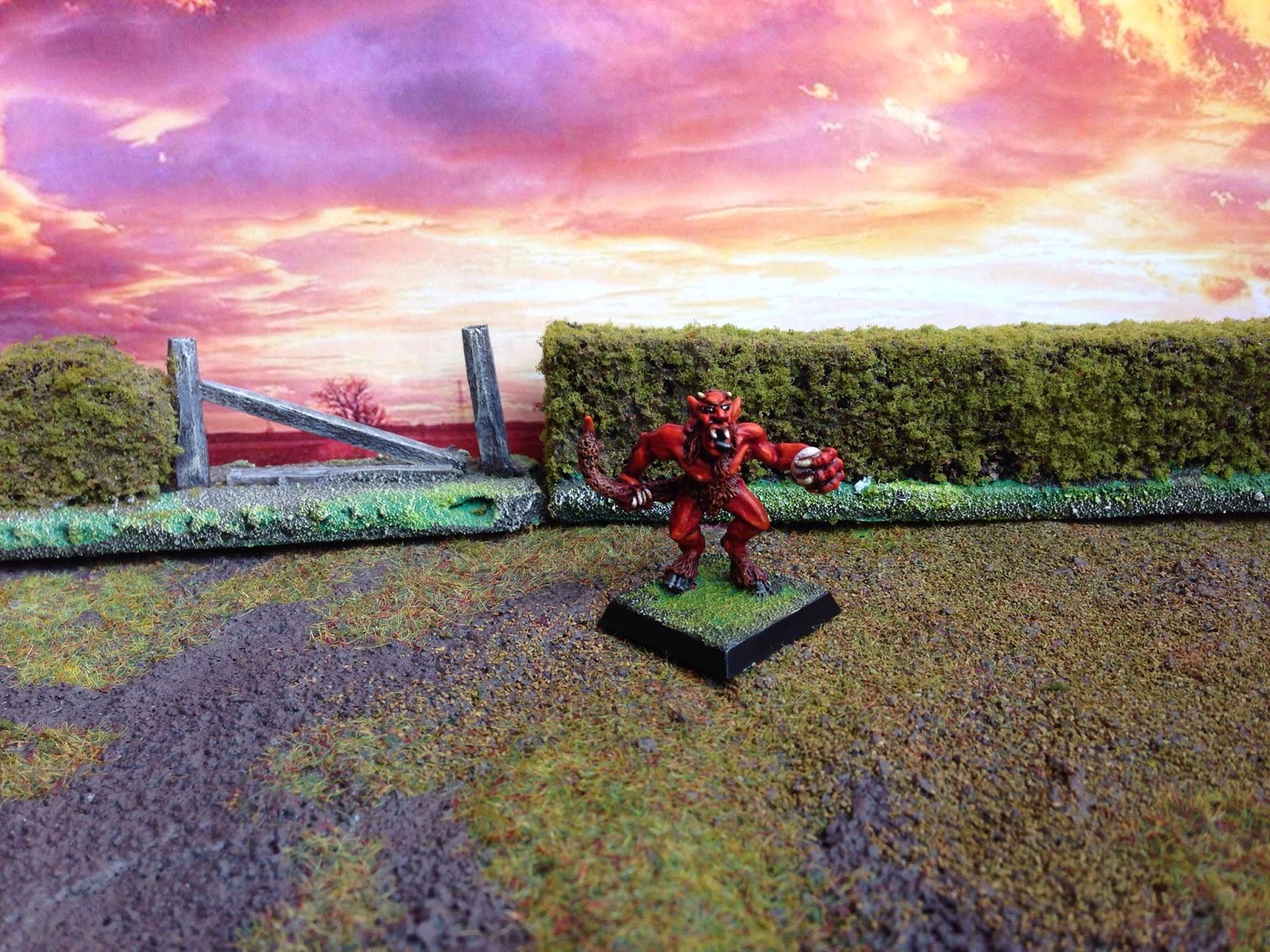 Whatever happened to speed painting? I remember it well as a fascinating (and entertaining) experience that slightly older players then me partook in the late 1980s. The premise was simple. You had one hour to paint a model as well as you could in order to grasp a chance to win a prize, usually a couple of blisters or a box set from the stock wall.

Of course, I never got involved back then. I knew my painting was crap at the best of times (and when I had put in a couple of hours as a minimum to boot!) and I really did wonder why I couldn't achieve a finish like Mike McVey or Tim Prow. The answer was of course a simple one - my method of painting was to undercoat in white, paint in the block colours and wash over with a black wash. Then paint the base green.

It wasn't until much later (after I returned to the hobby in 2004) that I was able to master the techniques I had found so fascinating and produce work that I was pleased with. But speed painting was never far from my thoughts and is one of the major influences on my painting style for Oldhammer. I have a lot of miniatures. I mean A LOT. And call it naive of me, but one far off day I would like to have painted most of them. And actually play games with them. I am no hoarding collector whose McDeath miniatures reside inside a cupboard - only to see the light of the silvery moon once a year, during secret nocturnal visits to 'storage.'

So speed is the key in my technique and I am pleased to say that once I get going I can finish two or three 28mm size miniatures a day or one big thing. Sure, there are exceptions, but it generally takes me a couple of hours to get a mini finished to my satisfaction.

But I have always wondered what I could achieve if I set myself a time limit.

So I did - and the Night Horror Devil you can see above is the result of that challenge. I selected this particular figure because I really enjoy the range, though I am no determined collector. I have a number of models from the series, and from time to time I like painting one up. They are too useful in scenario based games to pass up. They also look great on the painted miniature shelf. 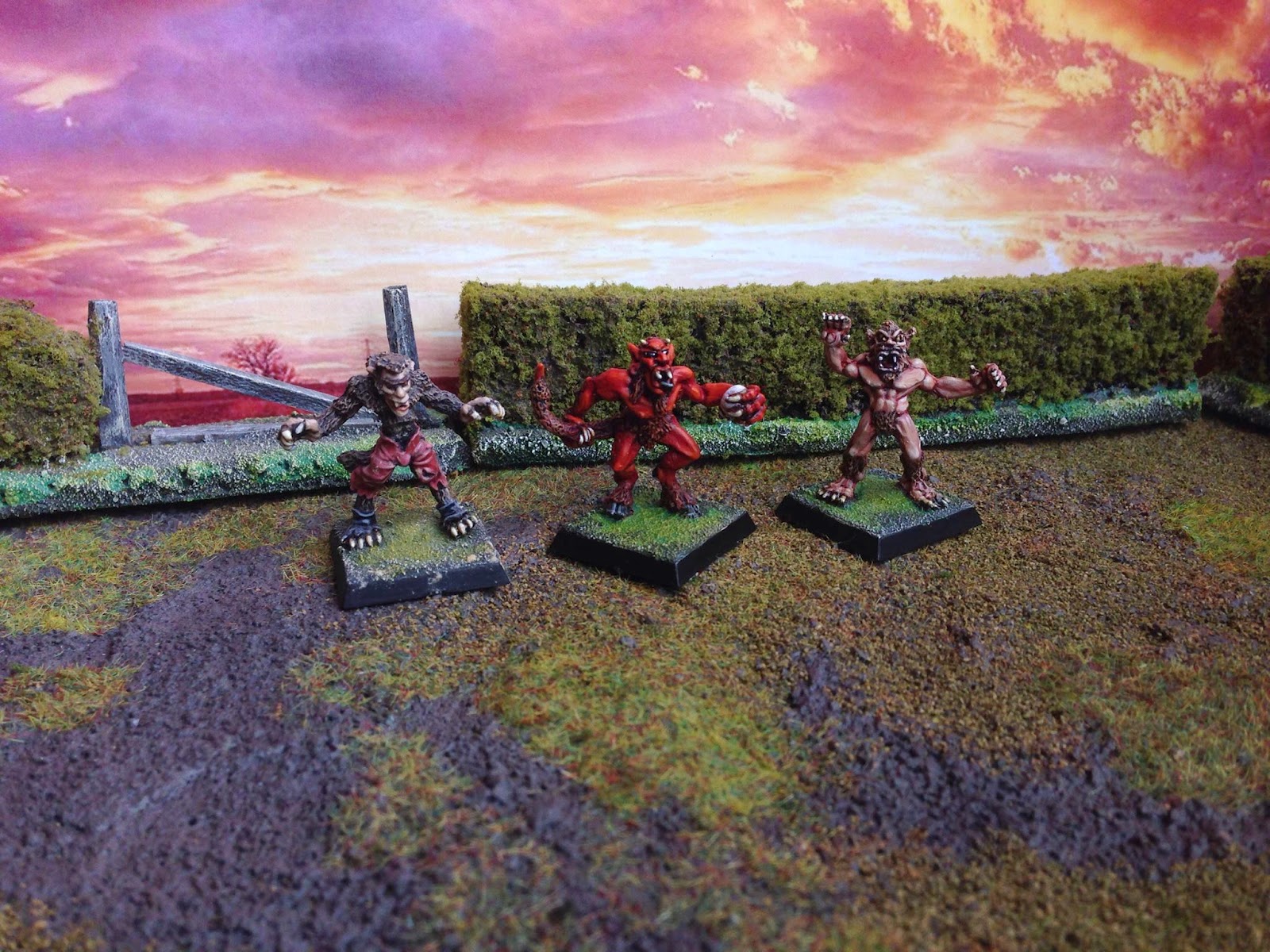 So I scrabbled around for that old chess timer we found in the garage when we first moved in. And gave up after about ten minutes. Remembering that we live in the internet age, I Googled a website that had a timer (which displayed how long you had left brightly on the computer screen as well as the total time that had passed) and set it to one hour.

The Red Devil you can see above was the result of that challenge. Is there some trick to photographing red? As I struggled to capture the finish on the model with the simple set up I use. Namely, set up my models while wife,kids and lack of light threaten to disrupt it all - and snap away frantically. My orange highlights were better defined than the camera suggests - but what the hell, eh?

He was painted very simply. Over the undercoat of white (which can be preapplied in my speed painting rules) I based the whole model with a dark red. Using a far brighter red, I highlighted the limbs in stages (adding orange and finally yellow) to the mix. These layers were accompanied with drybrushing over the furry places on the model's surface. My final highlight was pure orange, watered down considerably. Glancing up at the timer, I noticed that a fair chunk of the time had gone by at 32:12.

Next, I painted the base green and whipped out the black paint, using it to tidy up the hooves, mouth claws and skull. By the time I had finished this, the clock read 37:40. Using the Foundry triad system really helps speed things up, so I reached from my 'bones' triad and painted the teeth, claws and skull quick quickly. The skull took longer, obviously, and I help differentiate it from the white of the claws with a little watered down orange. Once complete, I had just under ten minutes left, and so I mixed in the black with the still wet bone shade and used the grey to highlight the black. Then the base was drybrushed and inked.

All in all, I am happy with the result. Having just the red to paint helped enromously, and I will be intrigued to see how much the 'look' of the final model will different when there is more to achieve. But it was, as I am sure you will agree, a great starting point for pushing my painting envelope with time trials.

Any one else in the Oldhammer Community fancy having a go? I'd love to see your attempts at finishing a model in under one hour. My top tip? Choose your miniature wisely!! Oh, and use a hair dryer to speed up drying!