Acceptable in the '80s: Bretonnian Knights from White Dwarf 136. 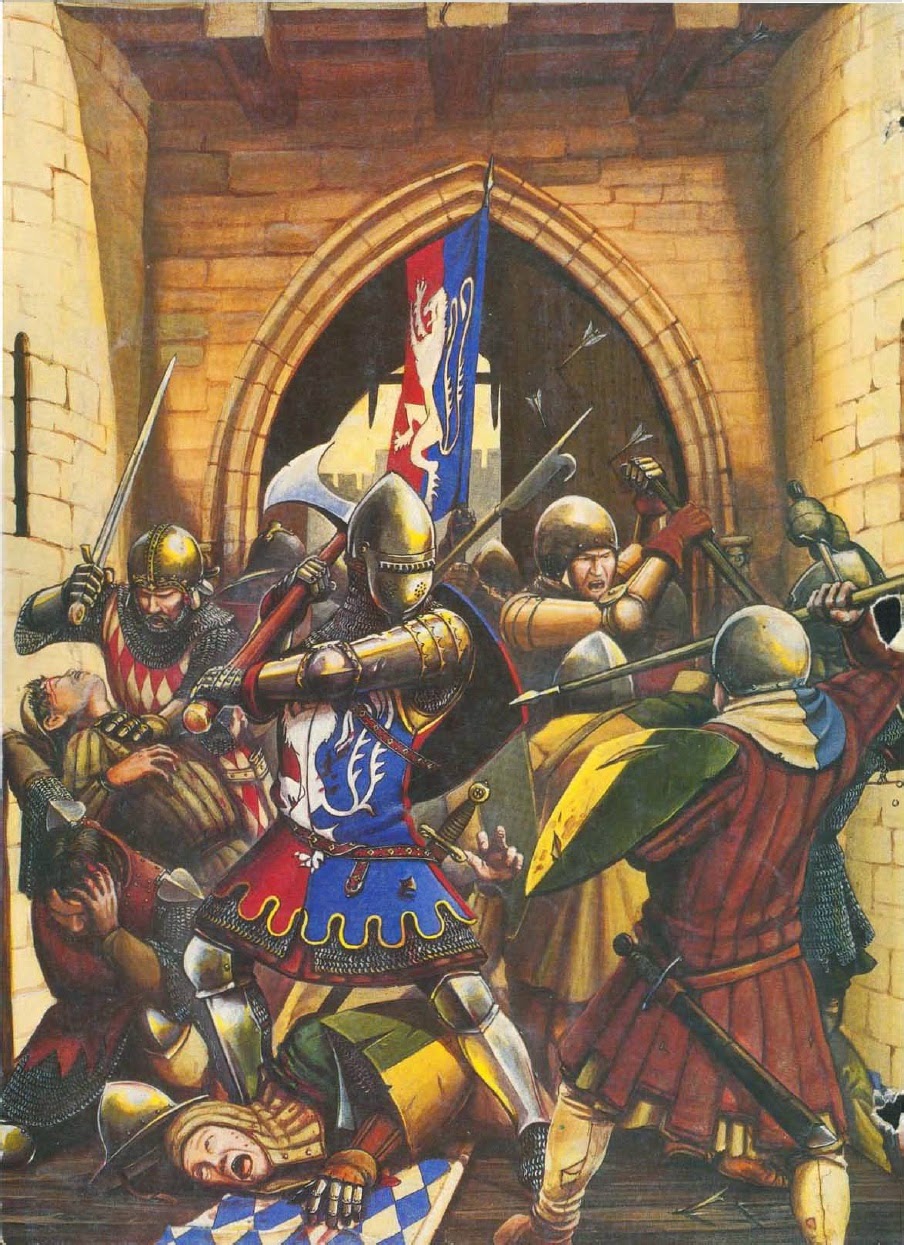 The Perry's Bretonnian range of the early 1990s were the last great release connected to Warhammer Third Edition. If you were anything like me, you immediately feel in love with the sculpts and with the brilliant artwork that appeared in the magazine. I can recall desperately wanting the archer models that were shown for sale in the back of White Dwarf, complete with one chap sticking up two fingers in the historically accurate salute to all Frenchman. The article that follows was my imagination's spur.

Thankfully, a lack of funds meant that I never did lay my hands on those lovely models. Perhaps that was for the best, eh? In order to save the world the need to witness the no doubt hideous attempts I would have made of all those surcoats.

Now I have mentioned before the Medieval Battle Game (that may have been called Chivalry) that was bandied around the Design Studio before. As far as I can tell, it was written by the Perrys and wasn't set in the Warhammer World at all, but in fourteenth century Europe. Nothing else is known about it at this time, beyond that the memorable card game 'Chivalry' served part of the combat mechanic. Look here if you want to read more about this unusual game.

Now, I am am going to go out on a limb now and make a guess. The painting that starts this article was possibly to be the cover of this game. Doesn't it just look perfect? And with all that space above the battling knights, there would be ample space indeed for any titles. I am sure you will agree that its a possibility. The image, by the way, comes from the back of White Dwarf 136. 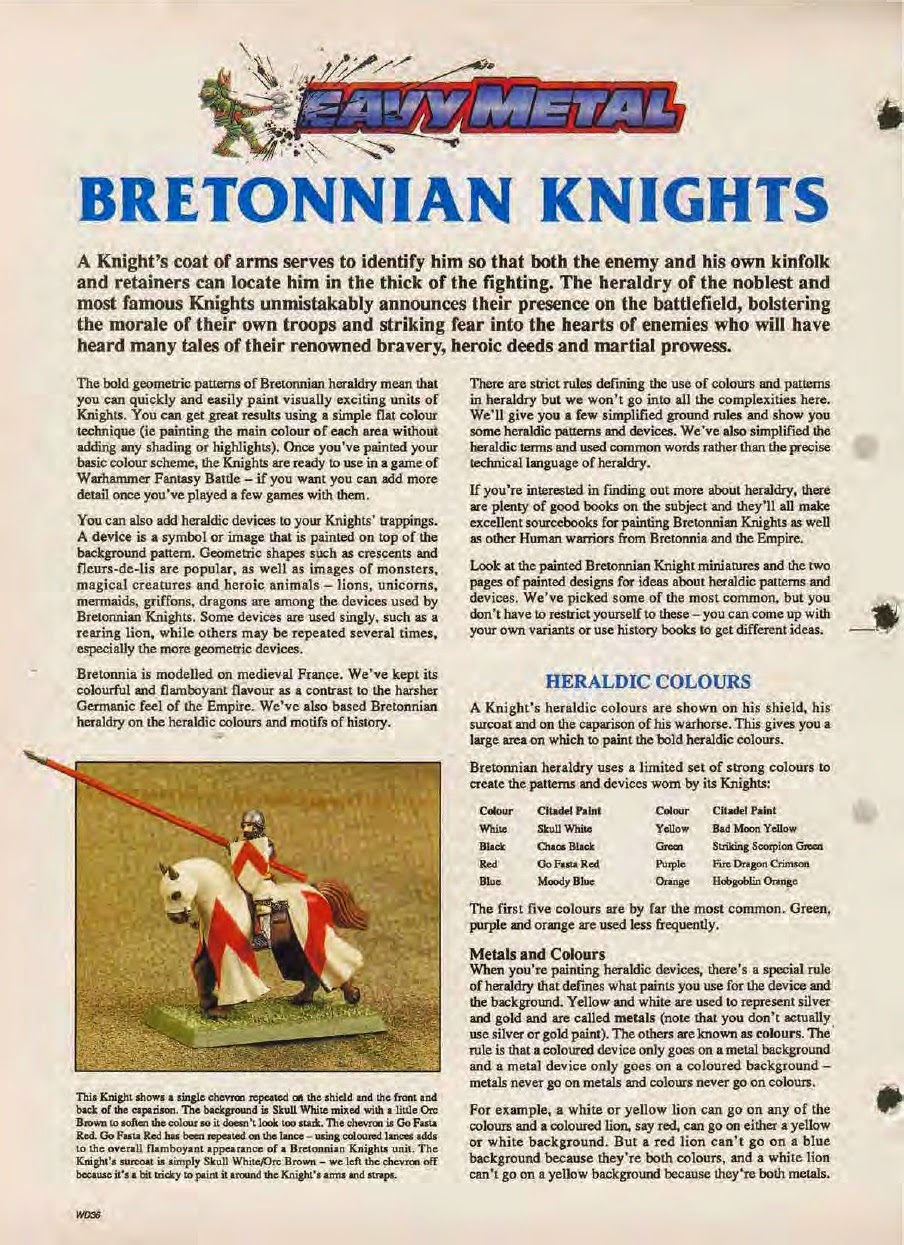 So what does the article contain that would be of interest to the Oldhammerer? Well, in terms of fluff - not a lot. Its clearly not an attempt to expand on the background in any real way but focuses on the artistic approach the Studio took towards designing colour schemes for the Bretonnians. Having a read of the page above will give you a good idea of what was influencing the designers, medieval France, and gives some quite interesting detail about how heraldry was used, and how GW applied this historical theme to its own brand of models.

What I didn't realise is how precise the colours had to be, and what the stylistic devices used as part of the heraldry signified. I have ten painted Bretonnian knights on foot, taken from the Foundry ex-Citadel range, The Barons War, and I had left their paint schemes without symbols for this very reason. Now that I have a clearer idea of what to use, I shall (one day, ha!) be returning to the models to tart them up a bit. Perhaps you are in a similar situation with some of your foot or horse troops too? 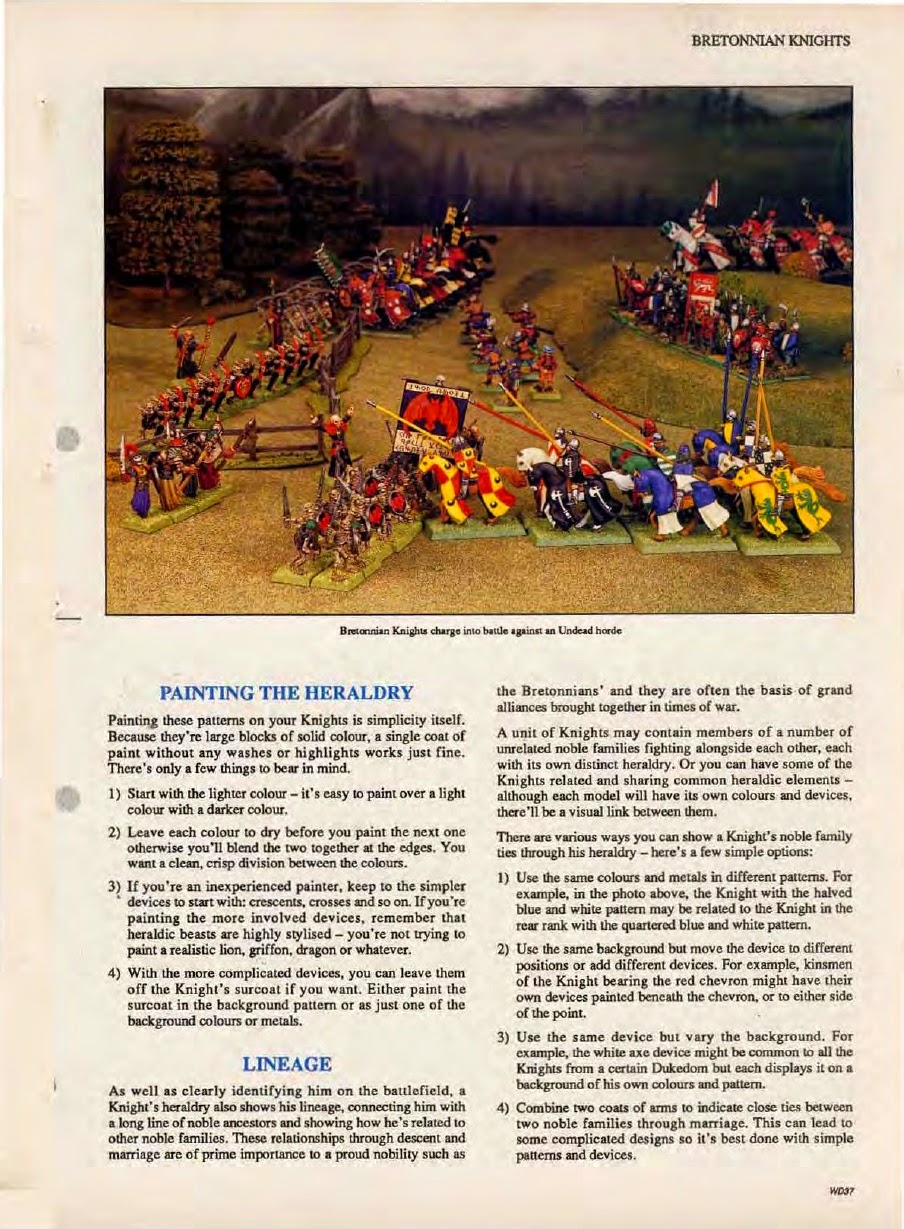 The second page gives further detail about the heraldric devices and how best to use them, complete with a simple, if wordy, painting guide. The information about lineage was very interesting, to me at least, and had me imagining the narrative possibilities to a Bretonnian army and how you could create a whole series of aristocratic families with shared iconography. Sounds perfect for a Warhammer version of Agincourt of something! 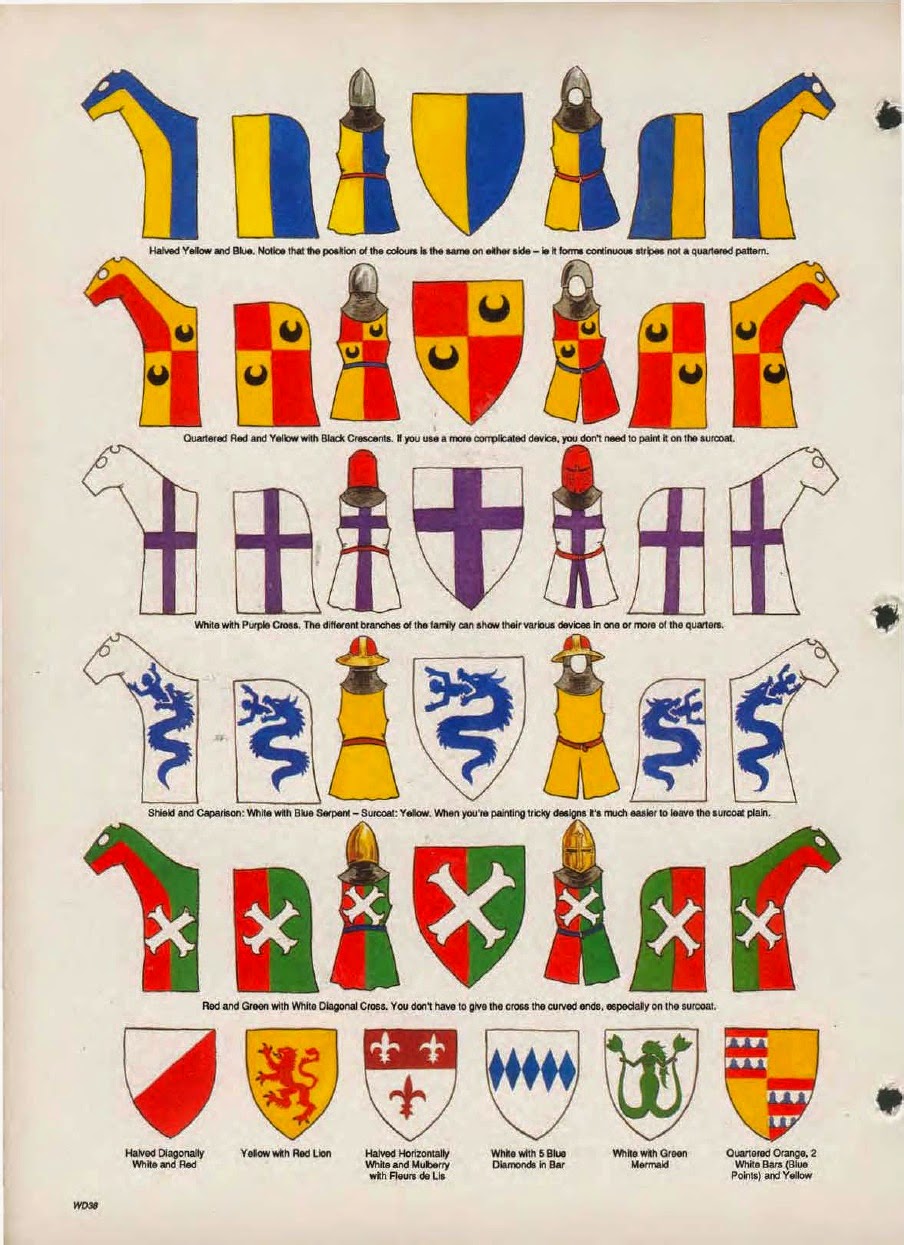 This page is probably the most useful. The suggested designs to paint on your lovely Bretonnian knights. One thing that is perhaps worth mentioning, is the historical (and there for fantastical) potential of painting armour bright colours, especially great helms. If you look in the centre of this page you can see a striking design of a purple and white knight complete with scarlet helm. What a fantastic idea! And certainly one I shall be stealing at some time in the future. 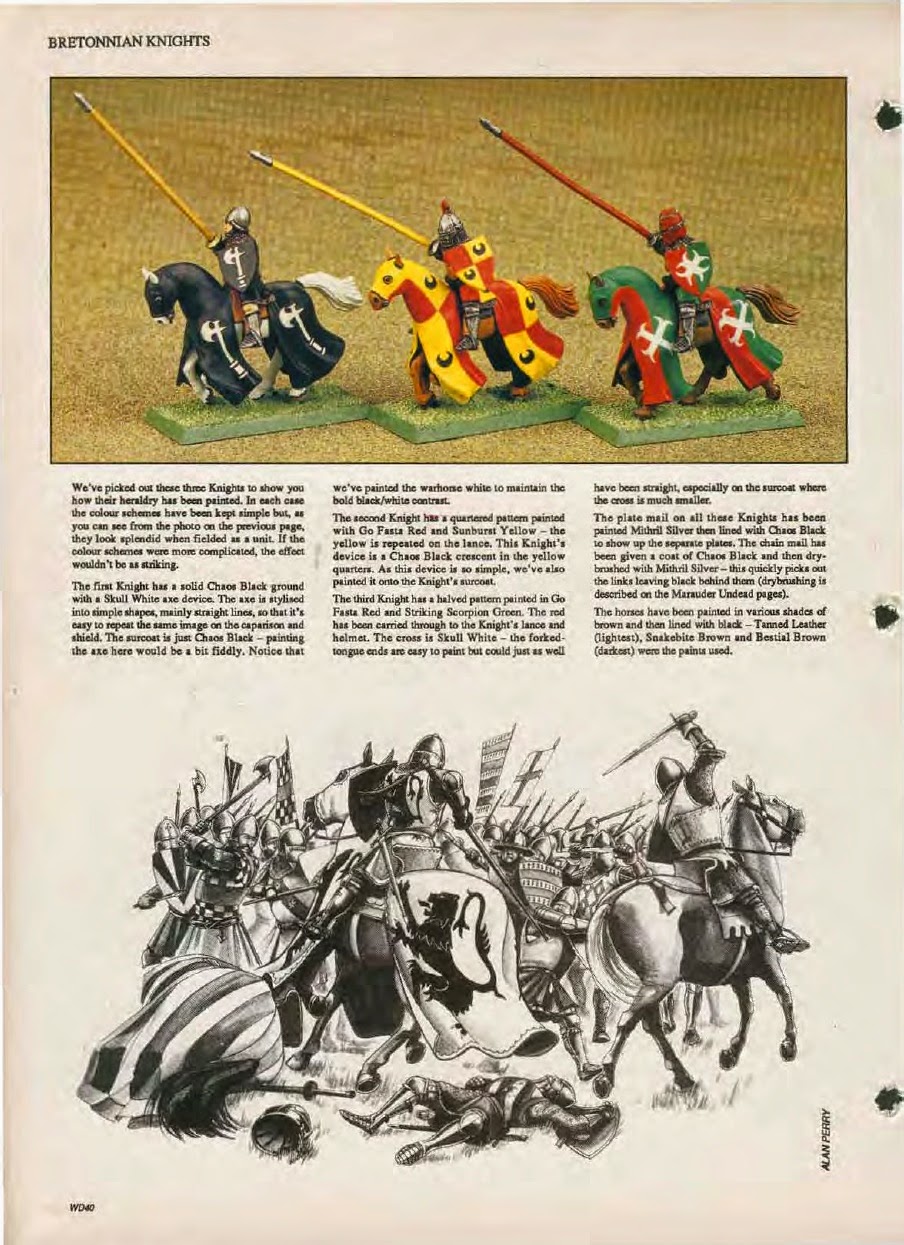 The article ends with some painted examples from the 'Eavy metal team (or perhaps the Perrys?) in which you can get a good look at the schemes on a model. Just as inspiring now as they were all those years ago, don't you think?

Email ThisBlogThis!Share to TwitterShare to FacebookShare to Pinterest
Labels: Acceptable in the '80s, Bretonnians