For Whom the Bell Trolls: Trolls in 2nd and 3rd Edition Warhammer 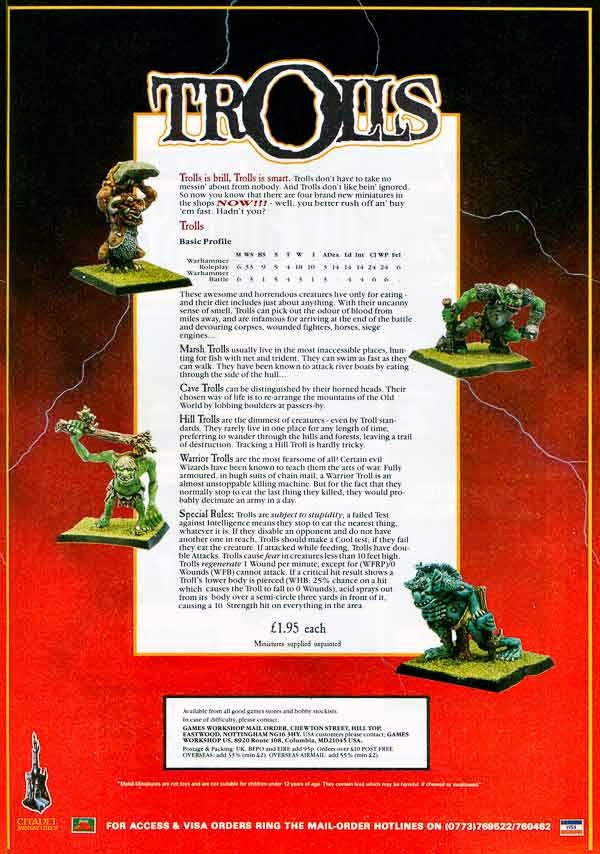 Not the kind who lurk on internet forums the world over, usually hiding behind a pseudonym and a computer screen, that must spout forth how 'correct' their opinion is and how 'foolish' everyone else is. I am sure you will know one or two characters like that by now.

I love the big, ugly and stupid variety (actually, they sound rather similar to the latter, don't you think?) who were uncommonly popular during the 1980s. My interest in them was sparked when I came across the ad for Aly Morrison's C20 Trolls, released in 1985, which I have used to begin this post.

What I didn't realise is that in 2nd and 3rd Edition Warhammer there was more to a troll than being a troll, there were different types, some of which remain in the game twenty-five years or more later. Namely, Marsh Trolls, Cave Trolls, Hill Trolls and Warrior Trolls. Discovering this got me thinking - what type of troll would my troll (Throgg, give a little cheer if you have met him!) be?

Considering that he carries but a stone, is even more stupid that the average troll and wears nothing but a lioncloth that a dwarf with very poor personal hygiene would look at, turn green and ask to leave the room I would say he was a Hill Troll.

Its clear that the four models heralded by the advertisment reflect each of the four types of troll. But what of the others? Which are which and can you decide for you own trolls? Let's have a look at some of the troll miniatures that were put out in the 1980s. Unsurprisingly, trolls had long be popular and models of them have been made since the 1970s. Follow the links below to Solegends if you want to know more about these, I have just selected the miniatures that reflect the 'look' of Warhammer 2 and 3 as I see it.﻿

C20 Trolls by The Perry Twins : From Solegends

These trolls were produced by the Perry Twins as far as I can tell. They are comical and rather gangly but have that brutal stupidity that one would expect from these slow-witted creatures. They are also blessed with some of the best names ever created for trolls (perhaps via Tim 'I make up the names' Pollard?) such as Dovogrod Gutsucker, Shakined Bone Bender, Rattlebones Bowlegs and Grog Stuntycrusher among others.

I love these models and they are my prefered ones to represent these rather dim-witted of monsters. Sadly, I have never been able to lay my hands on any of them for a decent price so I suspect that are very popular with other collectors and old school gamers too! ﻿ 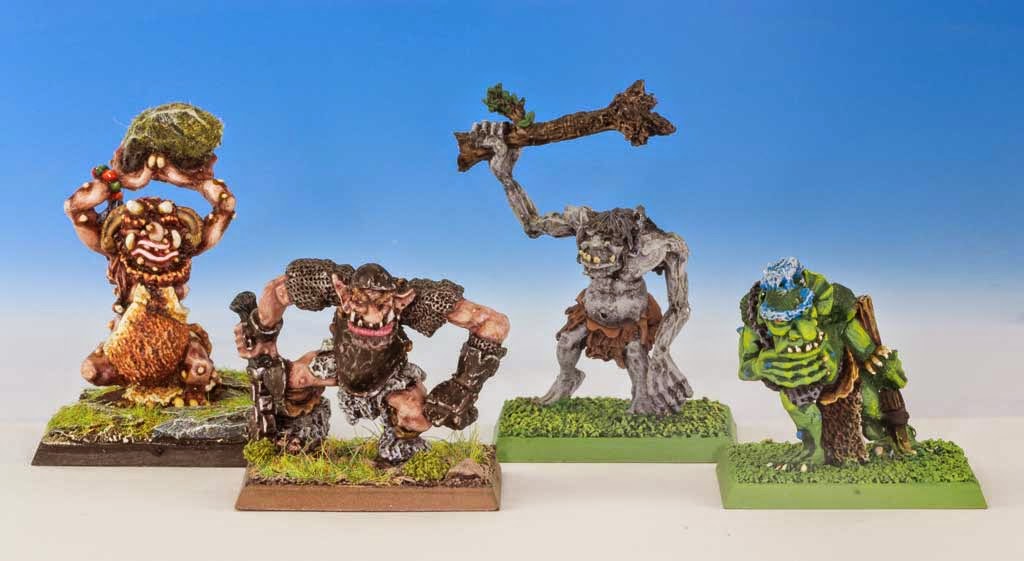 
Here we have slightly different painted versions of the models shown in the advertisment at the top of the page. Until, I spotted the image I was totally unaware of the existance of the 'Warrior Troll' model shown here. Its funny how despite years of research, article writing and months spent trawling eBay, there are new models and ranges to discover!
This range is my second favourite, and are made all the more desirable to me knowing that they represent different types of troll. Chap with the large tree trunk is my favourite of the bunch! ﻿ 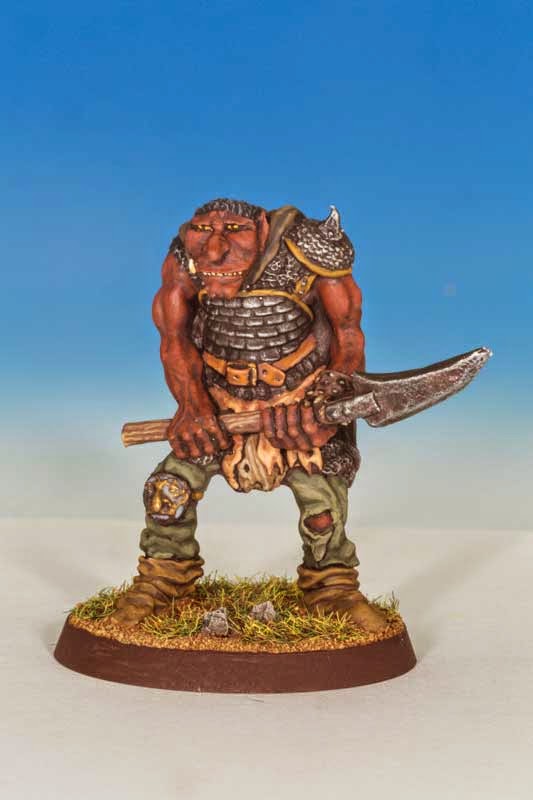 I threw this example in because I love Kev Adam's stuff. If memory serves, this was one of the very first models that was put into production designed by the Goblinmaster. Kev once told me that there was a second version of this model, a variant that he made but was never produced. I am pretty sure he said he still had it somewhere, so hopefully we will get to see it one day!

Again this is a very popular model. Try finding one under £40 and you are on to a good thing! ﻿ 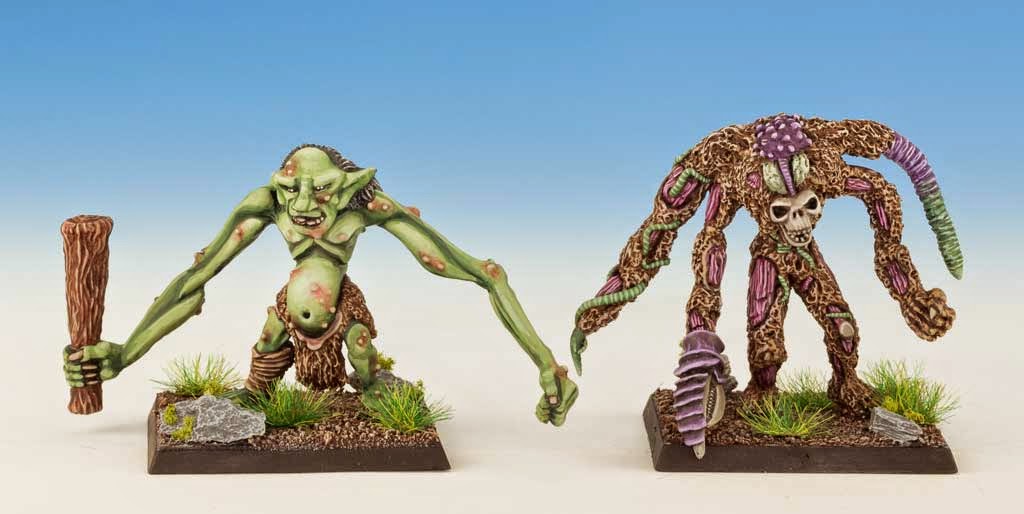 Now these are a real surprise and further echo the fact that despite the years and intensive research there are still plenty of things to discover. For example, these two unreleased trolls were produced by former GW camerawhizz, Phil Lewis, presumably around 1990 and as of yesterday I had no idea that they even existed.

Seeing them makes me wonder if they had any connection with the background book/article about trolls that Graeme Davis told me he once worked on, and that was rejected for no clear reason. Who knows? 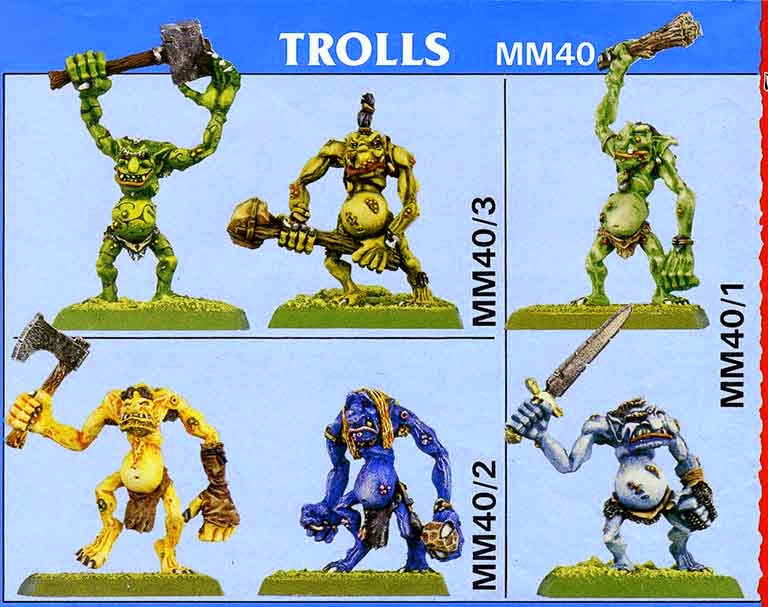 
Finally, we have the Marauder trolls put out in 1989. If you look closely, you can just make out good old Throgg, only with blue skin and no Slaaneshi marking on his beer gut. Like the trolls we have already seen, these are all grotesquely good fun, but seem to be a little more coherent as a group. At this point in Warhammer's history, there seems to have been a drive to standardise the 'look' of many of the creatures and units coming out for the game. This had positive and negative results as we all know, just look at the Big Hat Chaos Dwarfs!
So then, trolls!
Do you love them or loathe them?
And can you work out what type of troll your troll is?
Orlygg
Posted by Orlygg at 02:22

Email ThisBlogThis!Share to TwitterShare to FacebookShare to Pinterest
Labels: Trolls