Fandom is a funny thing. And Warhammer fans have to be some of the funniest. It seems that many of them are seldom happy. Perhaps its because they are locked in a perpetual plastic arms race enforced by products that follow the ever decreasing circle. A dilution of a once mighty concept down the plughole of life.

Or maybe they are just miserable.

Oh, and before you accuse me for targeting Warhammer fans I could point out plenty of other 'cult' groups who make ridiculous and wild statements of opinion (often disguised as fact) about anything 'new' or 'different.' Just look at the furore over that new lightsaber design in the Star Wars community after this week's teaser trailer. Some elements are all complaining that the lightsaber guard points are unrealistic etc despite the fact that there are a great many unrealistic (particularly the spacecraft that fly like aeroplanes) elements in the Star Wars Universe already.

I thought it was a great idea when I first saw it. It raised a smile. It was something that I was not expecting.

Warhammer used to have its surprises too. In the tail end of my regular gaming in Peterborough and Poole in about 2005 the only surprises seemed to be exclamations that the 'new codex' had now 'nerfed' a tried and tested list, optimised to perform well when lining them up and knocking them down. I expect that there will be similar vocal discord about the proposed base-size changes in 40k.

But push back the envelope of time and we rediscover a period in history when White Dwarf and Games Workshop had a sense of humour and they weren't too po-faced to share it. 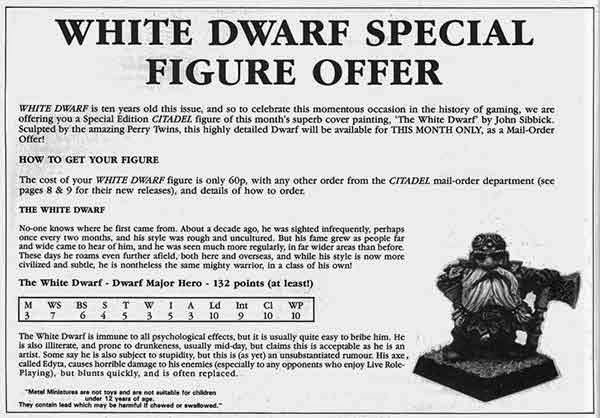 The White Dwarf miniature that was put out as a limited release in 1986 (and was made available to all in about 1991 via the catalogue) is a great example of a more relaxed, self appreciating era. Just look at the flyer advert that was popped inside issues of WD 90 and chuckle to the various in-jokes about White Dwarf staff.

I love the bit about his axe being called the Edyta and is often replaced. A reference, if you were not aware, of WD's trend of burning through editors after Ian Livingstone's ten year tenure as the boss of the magazine. Before researching the history of the miniature to paint it up, I had no idea that this little flyer even existed and reading it inspired me to come up with some suitably light-hearted rules to go with my White Dwarf when I use him in games. Rather than fiddling around with the stats as presented here (what they are) I thought I would create an '80s style random table to establish what power his Edyta axe will be imbibed with.

For each new combat, and by this I mean a fresh opponent or unit, roll a D10 and consult the following table. This will inform you about which of the 10 enchantments contained within the weapon will be activated.

1: Living Stone - The wielder's skin bristles with magical energy and turns an ash grey. Flesh has been transmuted to stone and the White Dwarf's Toughness is increased by 2.
2: Marsh - The area around the wielder becomes boggy and uneven. A foul stench wafts up from beneath the turf. The ground becomes very difficult to remain stable on as the soil turns to marsh under the very feet of the White Dwarf's enemies. All opponents in base to base contact with the White Dwarf suffer -1 Initiative.
3: Cock Burn - A magical aura burns brightly from the pommel of the axe. Suddenly, a distracting sensation can be felt 'below the belt' of the opponent to the front of the White Dwarf. The terrible itch, which may or may not have been caused by a visit to 'Dirty Gerty' in Altdorf, causes the opponent to suffer a -2 Initiative for D6 turns.
4: Blunton - The power of the Edyta affects the weapons of all enemies in base to base contact with the White Dwarf. All models suffer a -1 penalty to WS  due to their blade edges magically becoming dull and blunt.
5: The Master's Son - Extra-ordinary fighting power surges up through the blade of Edyta and empowers the White Dwarf with the terrible skill of his ancestors. He is awarded a +1 to his WS for D6 turns.
6: 'Gallag Her' - A hideous voice, sounding as if it is made by an enraged Yorkshireman, resounds from the blade of the Edyta. It utters the War Cry 'Gallag Her' (which is reported to be dwarfish for a very rude word indeed) which causes an instant fear test for all models or units in contact with the White Dwarf.
7: Forest - The White Dwarf's arms become thickly muscled and as unbending as a tree's bough. The White Dwarf's Strength is increased by 1.
8: Morning Dews - A mystic water soaks the trousers, socks, underpants etc of whatever is to the front of the White Dwarf. This causes the opponent's clothing to stick to his legs and make him walk like a constipated chicken, reducing his movement by 1. This remains in play for the rest of the game.
9:Thorn's Ton - This magical enchantment causes spiky thorns to grow from the handle of whatever weapon the model to the White Dwarf's front is currently holding. The model will need to make an immediate I test. If failed, it drops it current weapon in pain and must fight unarmed for D3 turns.
10: Saw Yeah! - The blade of the Edyta transform into a futuristic chainsaw. All armour saves are ignored (though magical armour and chaos armour retain a 6+ save) for D3 turns.

Did you see what I did there?

If you are playing a game of Warhammer with dwarfs in the near future, why not try them out and let me know how you get on?

Of course, there are have been a great many other White Dwarf models over the years. If you are interesting in having a browse through them then following the link below.