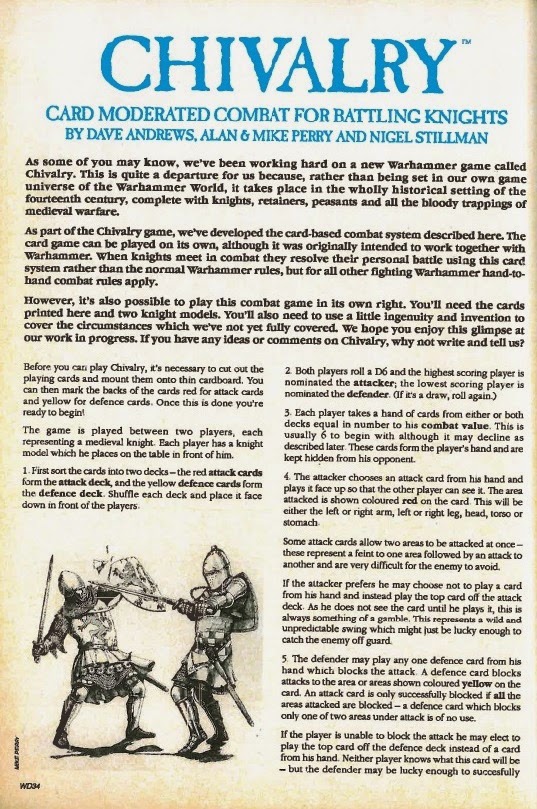 I my last post I made reference to another one of those 'lost' GW games that never quite made it out of the Studio and into gamer's lofts. That game was, of course, Chivalry. A good read of the first page of the article will inform any enthusiast that Chivalry was a game involving battling knights set not in the Warhammer World, but the Fourteenth century and was being developed by Alan & Mike Perry, Dave Andrews and Nigel Stillman.

Now that is quite a design team, is it not?

Sadly, all we got to see of this game is what I present to you here in this post. A card based system for fighting one on one engagements between two knights. Though with a little conjecture, we could easily suppose that the 'Full Tilt' game published in White Dwarf 215 some seven years later may well have its origins in the Chivalry project. 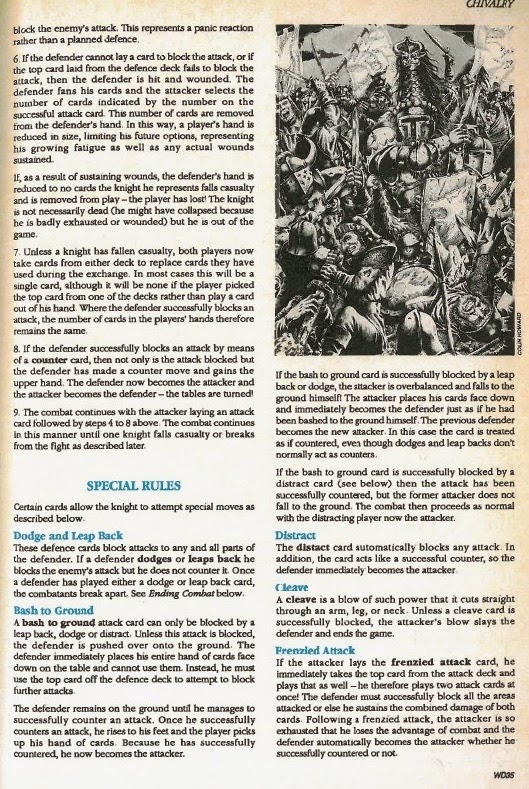 So what do we have here? In truth, its a fairly simple card game that should resolve a combat quite quickly and if played between to players who are familiar with the system, fairly frantic. Thanks to the enduring images of the knights on the cards themselves, many of which display the zany humour of GW at that time, I could imagine it easy to imagine your models leaping, and slashing and blocking away with gusto. The distract cards are particularly amusing, to me anyway, and remain something I have fond memories of, as are the cleave cards, complete with bloodthirsty depictions of limbs being removed.

By favourite card has always been the boot card. Classy! 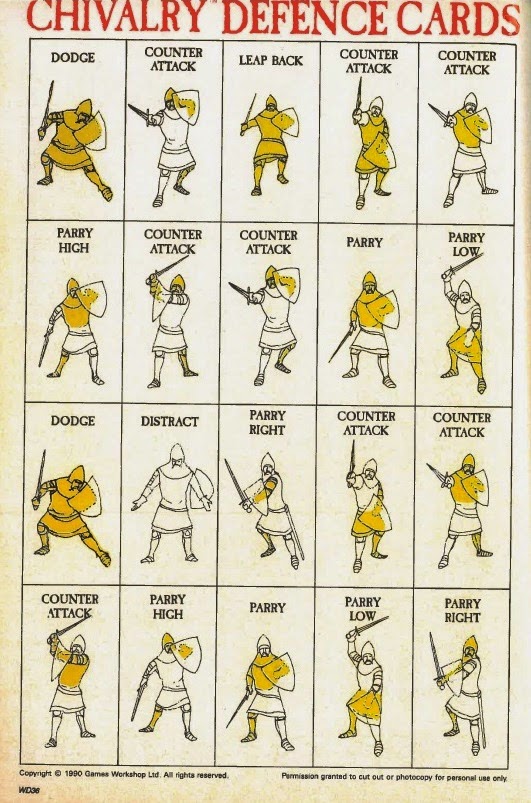 If you don't want to read the article presented in scans I shall give you the quick gist of how the card game works. Players roll a die with the highest scorer being deemed the attacker and the lower, the defender. Each player then selects six cards (attack or defence) from the decks. The attacking player can select one of his cards to represent his first strike, or risk picking the top card on the remaining deck. Once this card has been played its laid down on the table and the defending player checks his cards to find out if he can defend such a strike. If not, the number indicated on the attack card informs the player how many cards he must lose.

Play continues until one player lacks any cards at all. 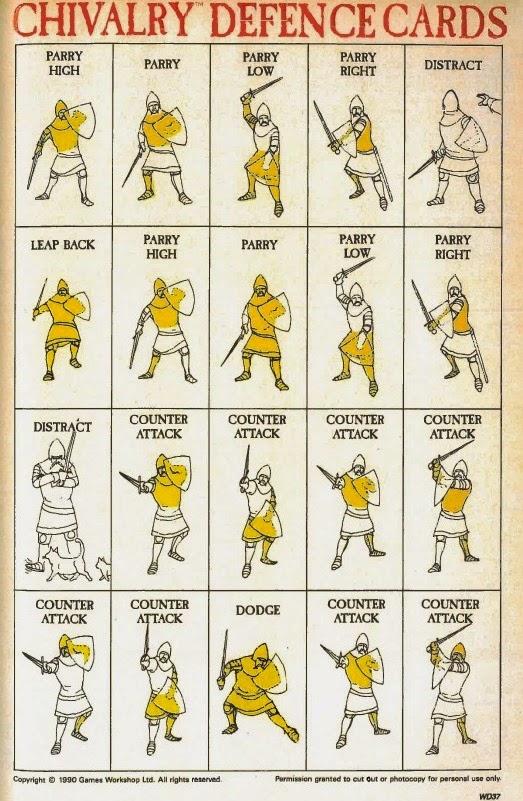 This being GW, there are several other 'special rules' to consider that further vary the game and add a little more depth. These rules are linked to the rarer cards in the deck.

This being White Dwarf, there are suggestions about how the system could be adapted for use in Warhammer. They suggest that the cards are used to help resolve personal challenges on the battlefield and go as far giving you a few pointers how to tweak the system to accommodate it. 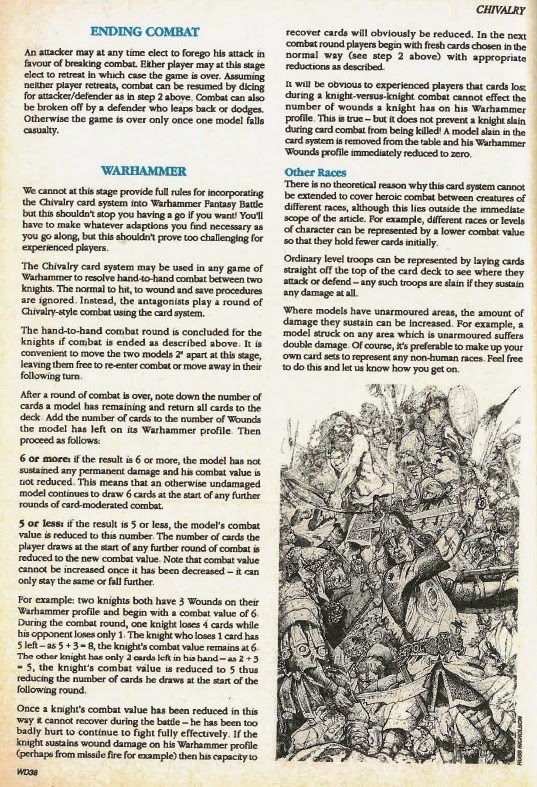 Personally, it looks like a bit of fun and a desire to use it may well encourage players to issue personal challenges just to try out the system. I cannot actually ever remember playing it though, which is a shame, as I played practically everything else GW produced during this era but it is certainly something I hope to try out in the future. 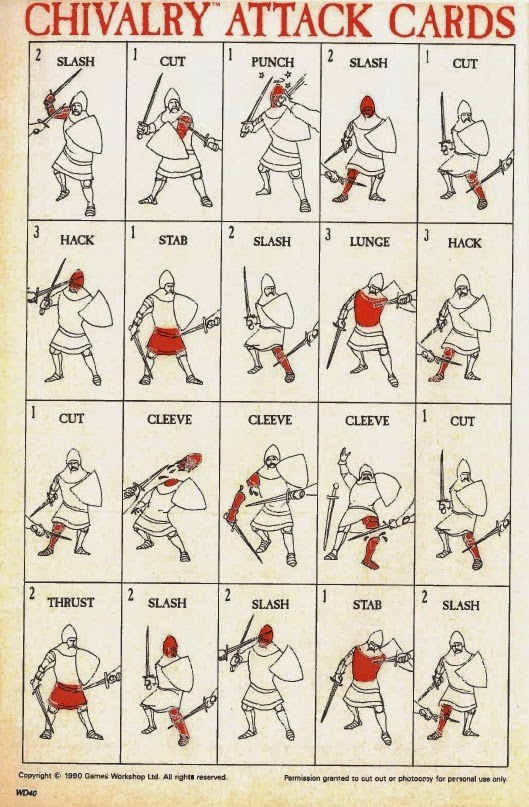 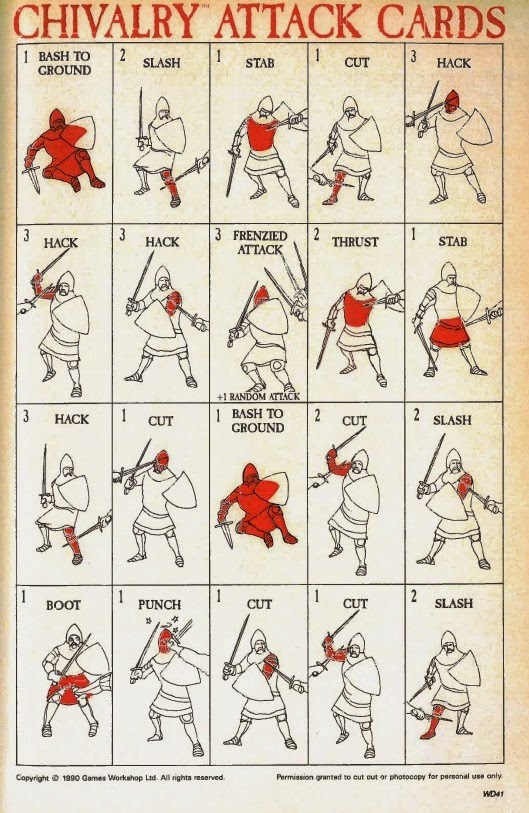 So then? Anyone else remember this card game from way back in 1990? Did any of you readers actually play it? As always, please share your opinions in the comments section below!