Mick Beard is a name that will be familiar to old school 'Eavy Metal enthusiasts like me everywhere and long term readers of '80s white Dwarf will be well aware of his work. White Dwarf 117 kicks off its miniature painting articles with a lovely spread of his models that encompass Warhammer and Rogue Trader. The eye immediately jumps to the dwarf juggernaut that is presented as a diorama above, only here beard has heavily converted the original model to suit his purposes. Somewhat criminally, this model is rather squashed to the bottom of the page, with a few close up photographs hinting at the detailing upon the model, including clever use of the dwarf flame cannon.

Of particular note here is the Life Elemental. In the earlier days of the Oldhammer I remember reading a post either on a blog or a forum about some keen eyed enthusiast who managed to spot this on eBay and snapped the model up for their own collection. Any well travelled folk who may recall who this was (or indeed if the lucky bidder is reading this) please make them known to me as I would love to inquire after some modern photographs of this model. 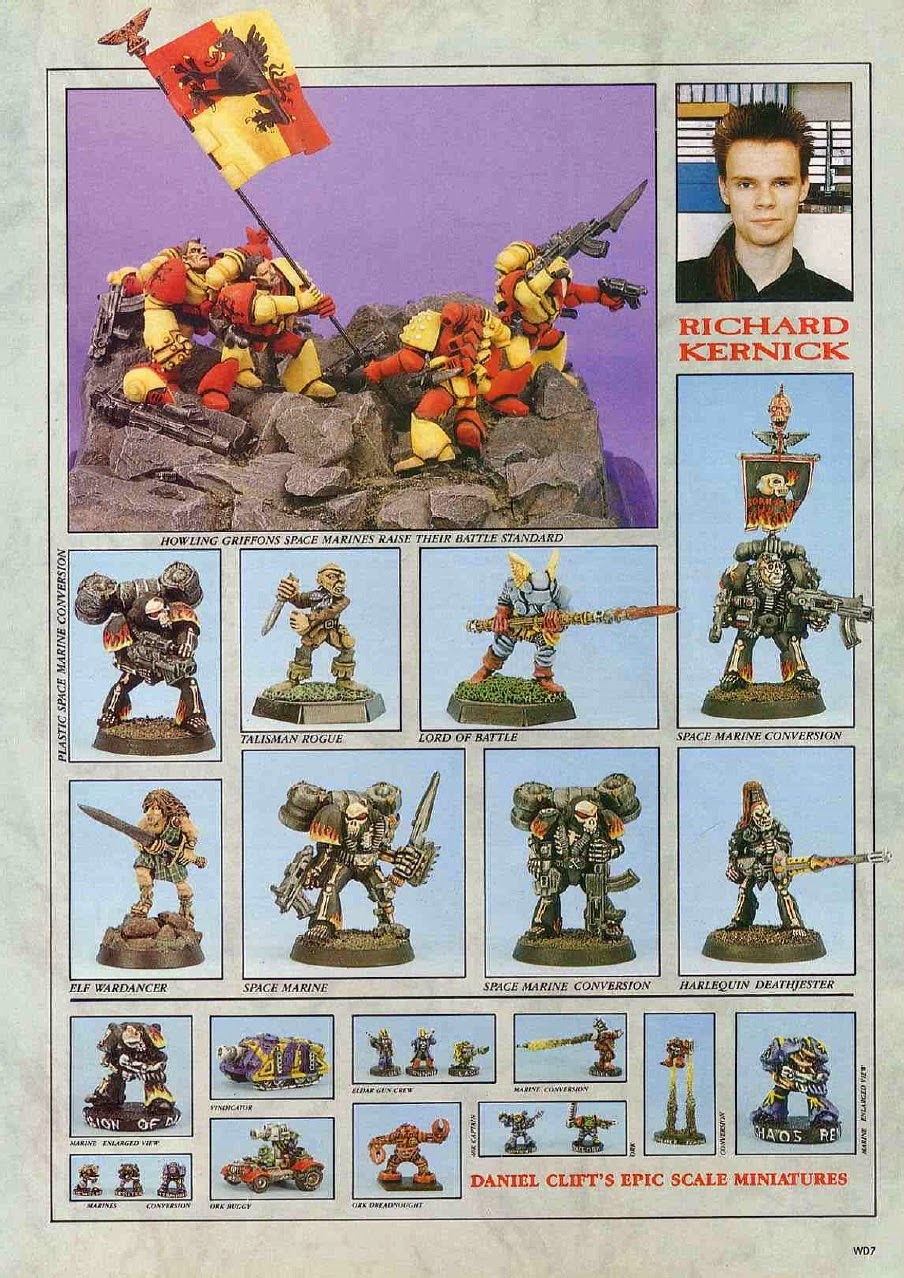 Moving on, we have some work from Richard Kernick, who was completing some work experience in the Design Studio and produced these models during the time he was there. His rugged, earthy style brings out the best in those Rogue Trader and fantasy models though the standout model is the Howling Griffons battle standard at the top of the page.

Strangely, I was only talking about Daniel Cliff's brilliant epic models last weekend to Warlord Paul and the boys over a game of Third Edition in Mansfield. His approach seems to have been to paint these tiny metal models as if they were full sized 28mm, including little conversions like the rocket launching space marine above. Though provoking and inspiring stuff indeed, especially when you note how he has actually written on the bases of those tiny marines! 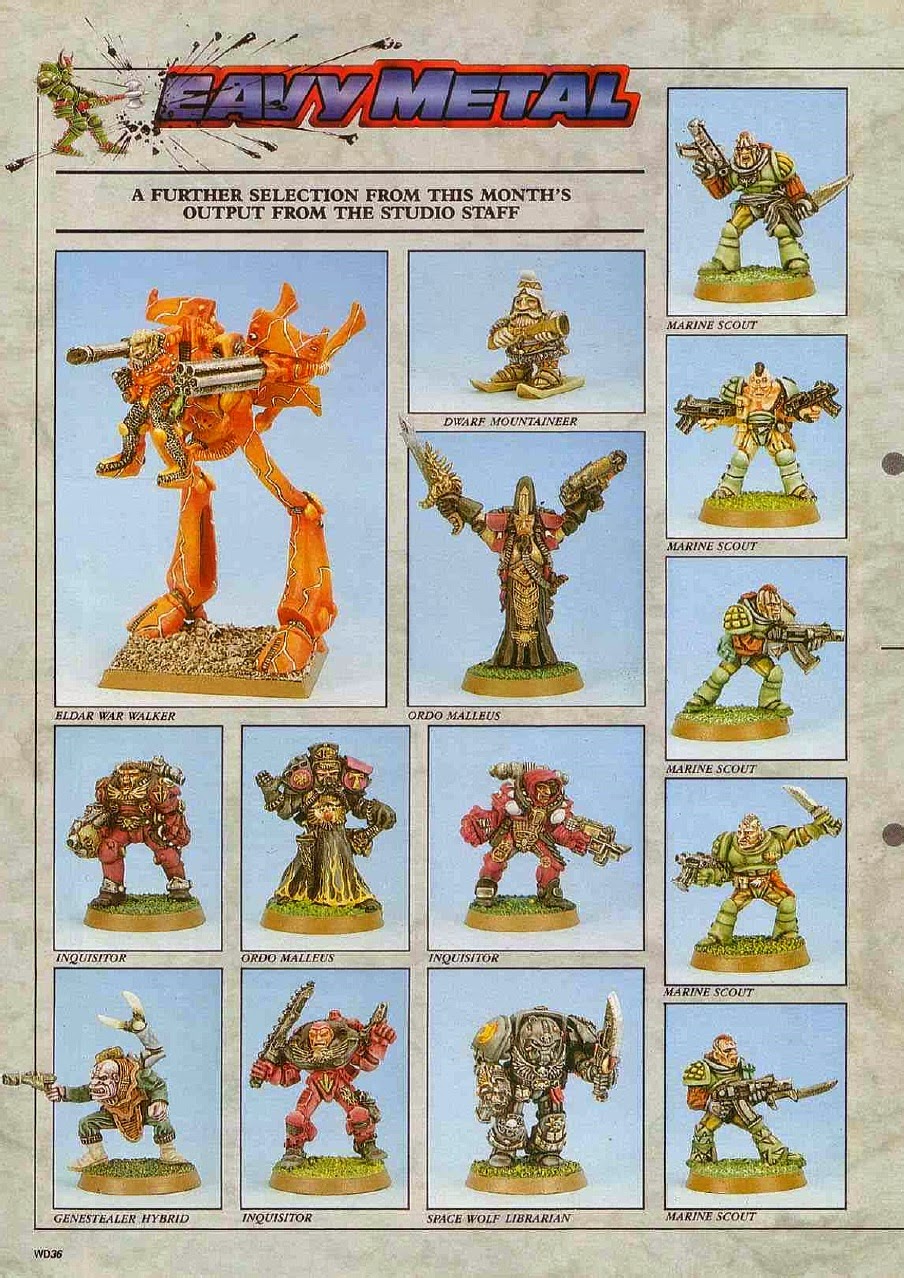 Some fantastic painting on this page with some more unfamiliar Rogue Trader miniatures, like the early space marine scouts and inquisitors. rather randomly a dwarf mountaineer has been chucked in with the 40k stuff! Gorgeous painted titans with the orange and green backgrounds. From recently reading several blogs about attempts to paint these models I have learnt that carrying off a scheme like we can see above is no easy task. Still, there are some useful colour schemes and banner ideas here for those of you who feel up to the challenge of getting a force of titans ready for the battlefields of the far future. 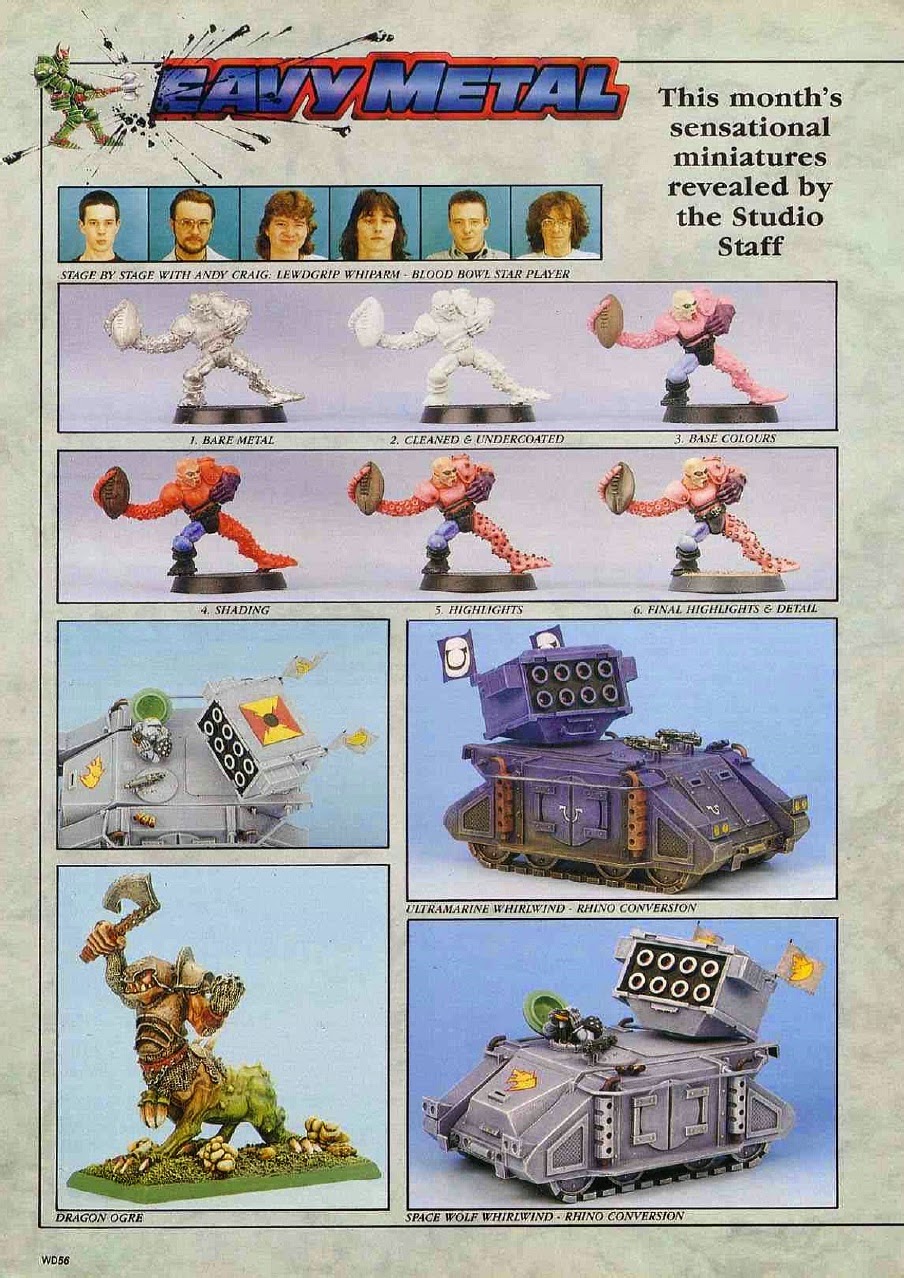 This page starts off with Andy Craig's stage by stage of the Blood Bowl star player, Lewdgrip Whiparm, that many of you will have seen before on this blog. The Rogue Trader vehicles are all conversions based on the original Rhino kit from back in the day when you were expected to build variants like this from scratch. For reasons unknown, much like the dwarf mountainner before it, the Dragon Ogre is squashed down the botto of the page and if memory serves, this was painted by Ivan Bartlett. Oh, and can you spot the ugly mugs of the 'Eavy Metal boys on this page? 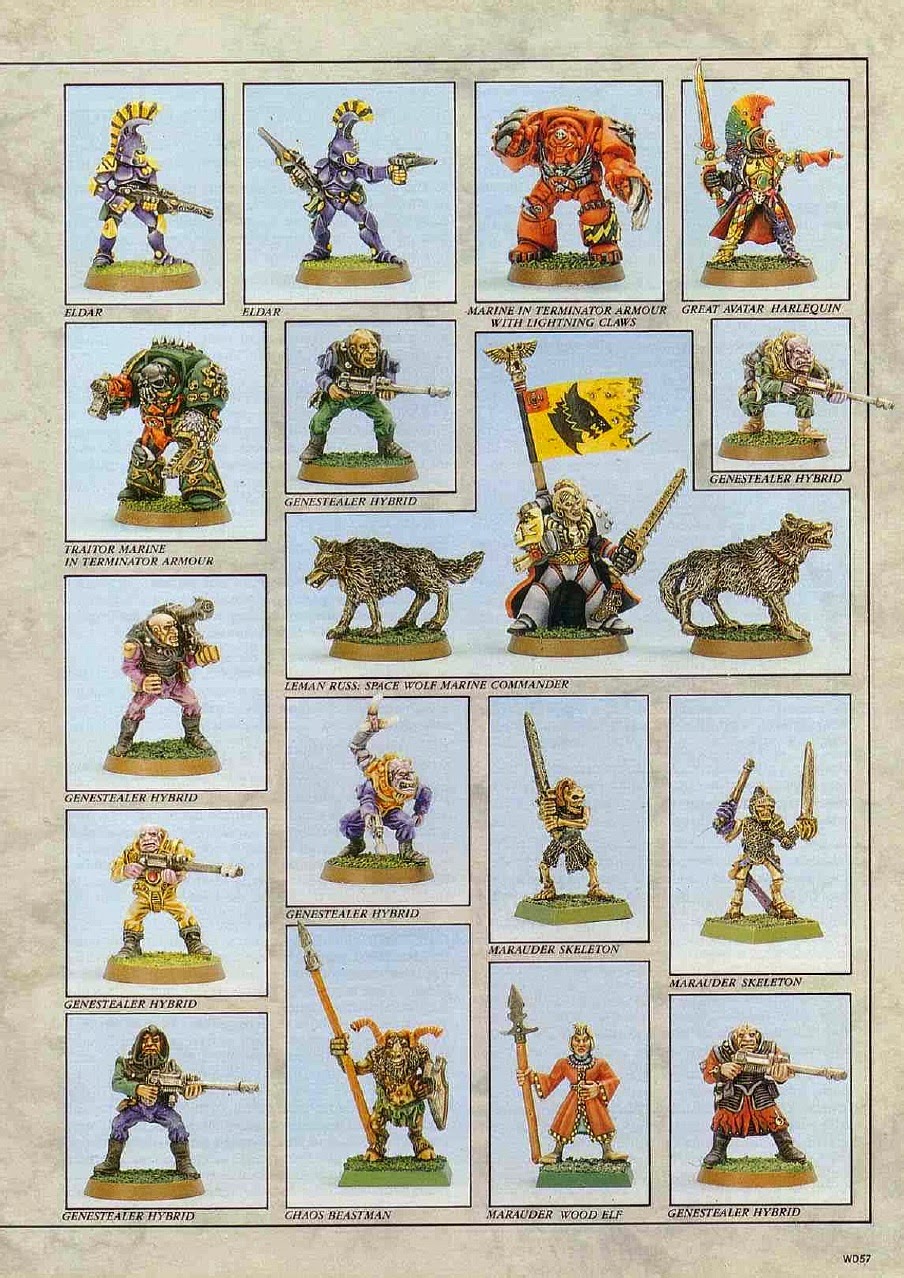 A great page of painted models here, including the Great Avatar Harlequin, a fantastic model and an even better paintjob. Twenty-five years on and you'd be hard pressed to find another Eldar model with the same presence as this one, such is Jes Goodwin's genius with the space elves. Also worthy of note on this page is Leman Russ, when he was but a mere space marine commander, complete with two wolf models. 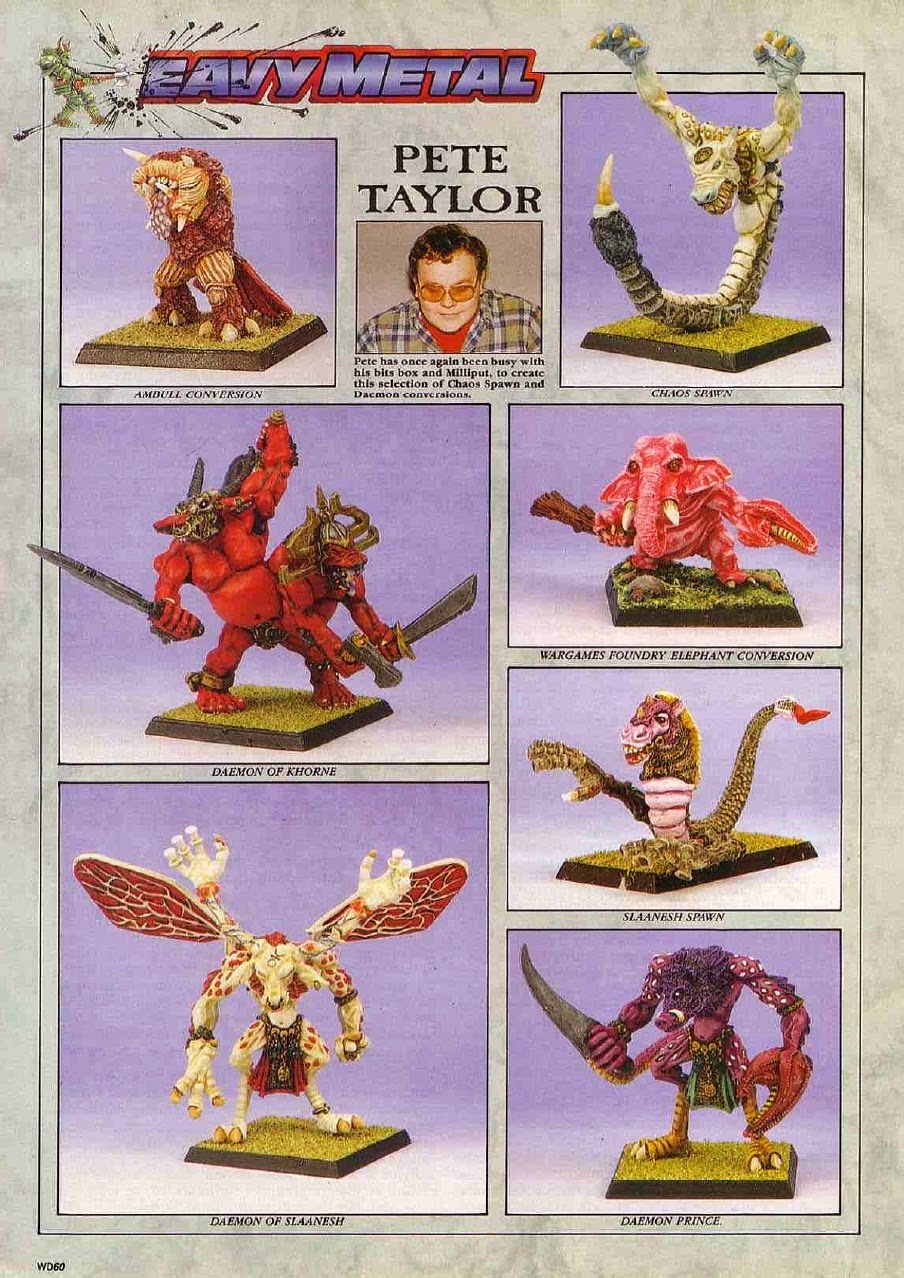 Pete Taylor was a legend in his own time for producing a shed load of chaos models at an incredibly high speed, many of which were conversions. A warped range of his creations can be seen here and really show what can be achieved with a big saw, a load of Realm of Chaos daemons and a lot of Milliput! 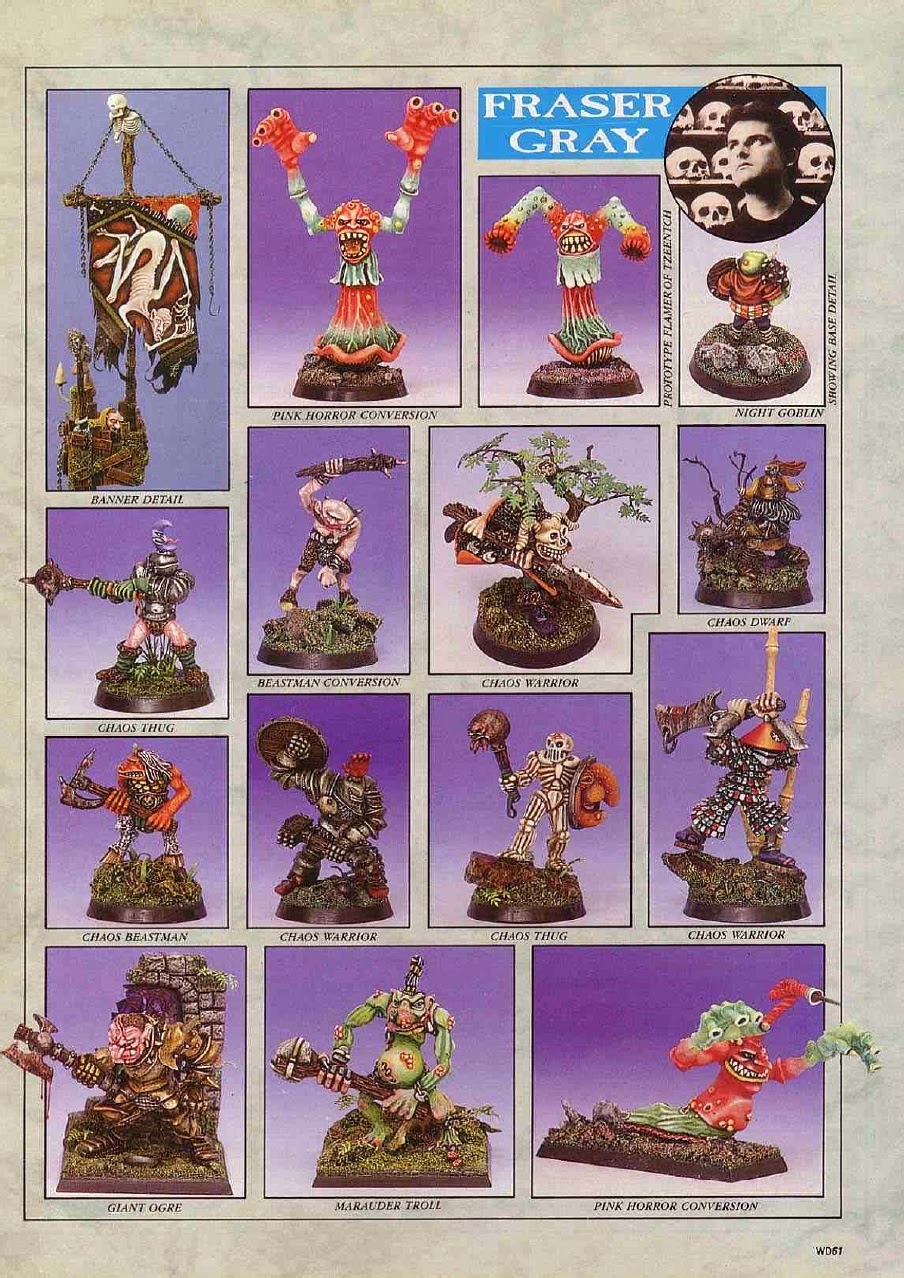 How better to end this stroll back in time with some work by the greatest of them all, Fraser Grey. Unlike all the other painter's whose work we can see here today, his photograph has a eerie crop of real skulls behind him. I remember wondering how such a photograph could be taken as a 'yoof' and have secretly wanted to copy it if I could ever find that many skulls on a shelf!

His incredible work speaks for itself. Enjoy!