Acceptable in the '80s: The Valley of Death : Lost Third Edition Scenario, a slice of history and some miniatures 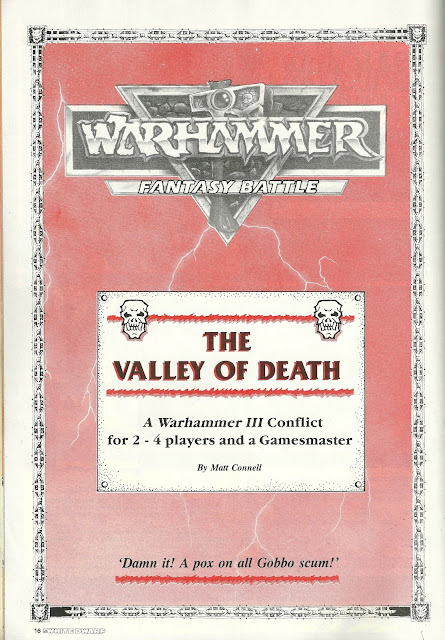 Warhammer II, or Second Edition, was famed for its scenarios. Lichemaster, Orc's Drift, The Magnificent Sven to name but a few, but Third Edition was a different beast that took a different path. With Bryan Ansell's realisation about the amount of money that could be made selling miniatures, the scope would have to shift away from small games, to massive battles with hundreds on hundreds of troops on both sides.

This was certainly possible for some, with individual collectors having gathered a huge number of metal models since the late 70s but was a pipe dream for many other gamers. But there was always hope!

The Valley of Death represents this shift. Gone were the quirky linked games, and in their place, larger and larger battles. The Valley of Death is indeed a large battle, so large that the article suggests that you play the game on the floor as your table may not be large enough.

Now there is no substitute for actually reading something. So for your pleasure, I include the complete scenario below for you to read, download or merely glance through. Once you have had a gander, we can move on to discuss the scenario in a little more detail.

Right, hopefully you have had a look at the article. As was traditional during this period, the scenario begins with one the amusing narratives concerning the major characters in the game. Something that many of us ape today in our own battle reports.

The major factions being the nice (for a Dwarf) Barnok Blatterzarn and the not so nice (for an Orc) Vomitskrag Krusher and his Orc Nasties. According to the background, the goblinoids have been busy raiding through the early summer (the traditional time for such things, apparently) and have begun to squabble and fall out. To energise 'da gitz', Vomitskrag decides to attack a nearby Dwarf stronghold. The Dwarfs, of course, decide to resist.

So the scenario sets us what is, to me anyway, the classic Warhammer scenario. A massive army of greenskins attacking the hardy dwarfs. Just thrown in a few human and elven allies, a whiff of undead and s sprinkling of chaos and you have the perfect recipe.

But the Valley of Death is not perfect. You need a huge amount of models to play it in its presented form. Vomitskrag's forces comprise of 65 models (three characters, 2 trolls and 60 orcs), Gan Greens' force (love the pun) exceeds 140 goblins while the Dwarfs are supposed to field over 120 models to boot. So that would comprise of over 380 models on the field, plus scenery!

Even 'back in the day' that must have been some task! Sure, you could always divide by 2, 3 or 4 etc, but then the game would loose its epic battle feel.

What I do like is the background material that describes each of the units. What is given isn't much, but there is enough to build the forces up, convert and paint them so that each unit is characterful and a little different. No reams of identikit troops here. Some of the background is positively Pythonesque (Slashing Slashers Slashing Slashers, for example) and has that dark humour you'd expect from GW during its heyday.

The first thing your probably noticed is the sheer size of the battlefield. Its certainly of Perry standards and is something that all of us should really aspire to create. Additionally, the range of terrain would pose some interesting tactical points. There are multiple crossing points, bridges and fords, as well as forest, boulderground and rivers. Quite a broad mix compared to the truly random mix in modern Warhammer. This makes for a more realistic battlefield (for a fantasy game anyway) that appears like it could be a real place.

The order of battle is also of interest, with specific units appearing on different parts of the battlefield and detailed rules based on race and terrain type. It seems complex, but you must remember that the scenario was designed to be played with a GM. Also of interest, are the complete lack of points values. The scenario is purely about a narrative, not an army list. Who will live and who will die, which characters will distinguish themselves on the field and which will disgrace themselves?!

One thing that really interests me is the nature of the victory points. I was impressed by the sheer amount of them. Perhaps this too is a factor of 80s Warhammer missing from the modern perspective? It shouldn't really be about the armylists that build the opposing forces, but the conditions for victory that both sides should meet. 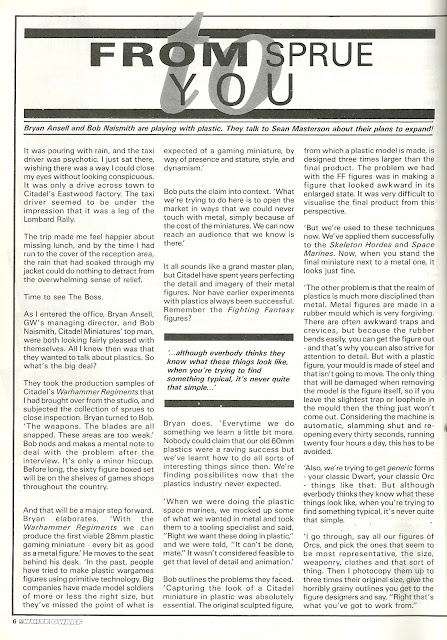 Nest, I would like to discuss this little gem of an article, also culled from issue 97 of WD. Its a report about Ansell's vision towards the then new plastics technology and the views of the engineer behind these plans, Bob Naismith. Not only is it a fascinating piece of history, but it is written in a totally non patronising way and there is no sign of the dubious adjectives of cool and awesome that seems to pepper the pages of modern WD.

From Sprue to You

Dark Future, then called Highway Warrior, even gets a mention! 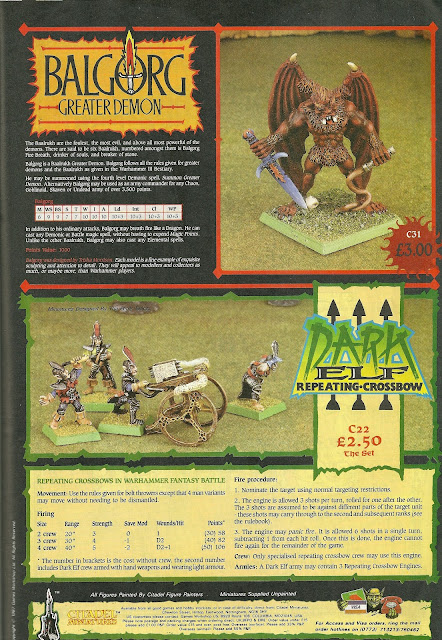 Ah, the Balgorg, or should that be the balrog? Early Warhammer's demon is obviously inspired by Tolkien's famous novel, so much so that these days a C and D letter may have been on the way! Great model though, suitably big and scary. The wings were later used on the Bloodthirsters. The beast shares the page with a Dark Elf repeating crossbow with full rules. I've never seen this on eBay, anyone out there got one?

To end this post I shall include some of the lovely photographs that appeared of painted Citadel, via the skilled brushes of the 'Eavy Metal team.

Well, that is about your lot from issue 97. Next time we will be looking at the next issue's Chaos thug and centaur releases.