Regiments of Renown: A short history and catalogue Part Two

Hello, and welcome back to the second post concerning the Regiments of Renown units released during the lifetime of 80s Warhammer (First, Second and Third Editions). Originally I intended to create a single post that detailed the entire range but as I worked on the research, I realised that I'd have to split it into two posts as the subject matter was extensive - not to mention my tablet groaning under the strain of all that text and images!

So here were are with the second part, and it is my intention to document the second (and far more well known) set of releases that graced the Independent Game Stockists of the late 80s and early 90s.

Thanks are also needed for those readers who have contributed further information about these ranges... You are to numerous to mention, but I intend to edit up these posts in a few days to include all the relevant information out there - so if you have better pics or whatever, please send them in as I hope that these posts become the definite guide for collecting these wonderful ranges.

But I digress... Back on topic then!

Mini Review: Here we have the second edition of the regiment and probably everyone's favourite. The appear in the Third Edition rule book so are well known to us all. The sculpts are classic 80s dwarfs and are lovely. I own one or two of the trooper models and had several of the character models back in the day. Lovely, lovely... And as for the brilliant colour scheme... Just perfect Warhammer goodness really. The force does need Bugman's cart to be totally complete mind!

Availability: Certainly numerous but often highly priced by the 'Buy it now' seller well beyond the actual worth of the troops. Considering my experience, I think a fair price for a box set would be around the £40 mark. I've seen sets sell at auction like this several times. I wouldn't pay more.

Mini Review: As with many of the other models of this range, some of these sculpts had a previous life as part of a different range, and I know of several varients of the command figures. Even so, this is a classic slice of 80s undead, when they were exactly that, and did not have the limitations of more recent ranges. The sculpting is what you would expect from this period and the skeletons have that spindly grace that I love in the undead. Classics, and utterly so!

Availability: Plenty of these about. Pay no more than £30 boxed, though. I own this set and they are one of the few survivors of what I had back in the day. My father bought this set in Wonderworld in 1988 and I have been planning to paint it since then. One day...

Mini Review: I recently acquired these online and I must say they are excellent. Just as you expect from the Goblinmaster, Kevin Adams, these are characterful little models. The command pieces are particularly good, and I view Harboth as one of the best orc sculpts ever produced by GW. If you love orcs, or even have a passing interest, you must own this set.

Availability: I've rarely seen this set sell boxed, but it was fairly straight forwards collecting the models individually. A few pounds per model really. Spend no more than 30-40 pounds in my opinion. 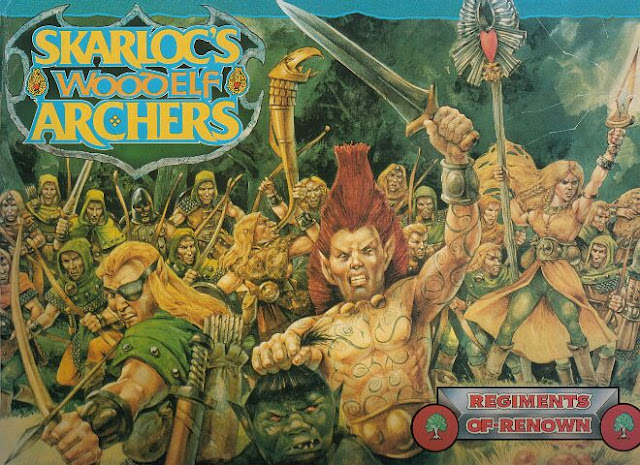 Mini Review: Classic elves in the classic 80s style. Yes they all look like a warped combination of pantomime leads, 80s hair metallers and the cast of Robin of Sherwood, but I guess these were Goodwin's inspiration. A must own.

Availability: In my experience, the most common of the sets. Pay no more than £20. That is how much I paid for the set with the original shields to boot! Mini Review: More classic orcs. What else can be said?

Availability: I've seen these often enough. I was really lucky and got mine for £15 at the Bring and Buy sale at Salute this year but they usually sell around the forty pounds mark. 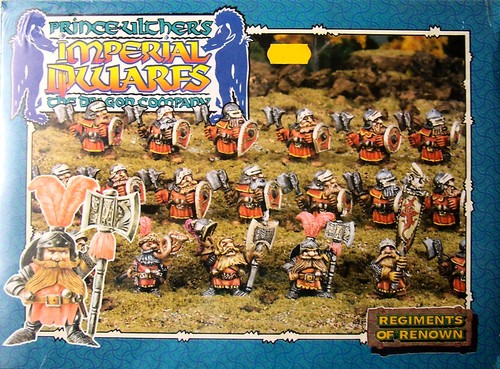 Mini Review: These Dwarfs are typical of the period and exhibit the sense of depth and quality as any of the better 80s dwarfs. The command group is particularly impressive and are probably worth the asking price alone. Lovely, lovely models - just like the rest of the sets from this second set of releases.

Availability: In my experience these are the hardest of the sets to get hold of. Sure, you could pick.up a box for sixty, but part of the fun in collecting is getting stuff cheap, isn't it?

As well as these excellent sets, GW re- released a selection of the earlier sets in clear plastic boxes that hung like a blister pack- and boy did they look good!

Here are the codes and models, see Part One of this post for the details.

And there we are. As before, any better quality information about these would be gratefully received.

Email ThisBlogThis!Share to TwitterShare to FacebookShare to Pinterest
Labels: Regiments of Renown