Warhammer Chic? A look at the Citadel patches of yesteryear

Yesterday, I spent much of my time rooting through my lead mountain in an attempt to get back into serious painting. I have so many miniatures left unsorted that my only option of transporting them was to gently pour them into a deep wooden draw and stagger with them to the boot of my car. I swear that the combined weight of all that Citadel made by car slightly askew as I drove it to my new house!

Anyway, amongst my numerous finds, and it is amazing (or should that be worrying?) how many figures you forget you own after years of collecting, I unearthed these two embroidered patches from 1990. Finding them brought back a recollection of purchasing them in the Southampton Games Workshop on a visit to the place with my parents.

Prior to this, I had completely forgotten that they even existed, let alone that I owned a couple of them. I remember that at that time I considered going out in a blue denim ensemble the height of style and poise. I had a jacket and matching jeans and these bad boys were destined to be sewn upon the shoulders. For whatever reason, that obviously never happened. I cannot recall why, though I expect it was one of two possibilities: one my mother didn't want me defacing my clothes or more likely, the rise of the shellsuit made these distinctly '80s style assessories redundant.

Whatever the reason, finding these two patches has really tempted me to find some suitable jacket and finally adhere them to the shoulders after twenty-six years of waiting. Did any of you dear readers achieve this peak of fashion back in the day? Or are any of your STILL wearing them proudly? I'd love to know!

But the story does not end there. I had a nagging thought that there were additional badges in the range as I have cloudy memories of a glass cabinet near the counter with all manner of bric-a-brac laid out for purchase. Browsing Solegends for a while I stumbled across the collector's page for badges and was delighted to find a full catalogue of the other patches. 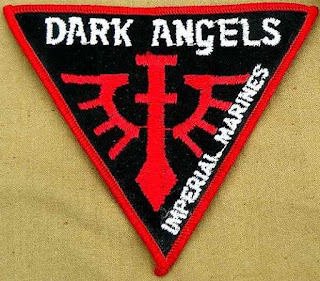 I find this Dark Angels patch quite interesting because of the utter absence of green. That particular shade has become synomynous with the chapter and it is refreshing to see some iconography of theirs not swamped in the colour. The icon itself hasn't changed much either in a quarter of a century, beyond some refinement to the shape of the sword and wings. 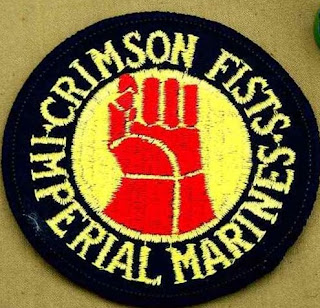 The Imperial Fists' symbol has also seen refinement with the line along the bottom of the gauntlet long removed. The colour use is now different, with a black fist in a white background edged in black much more common. 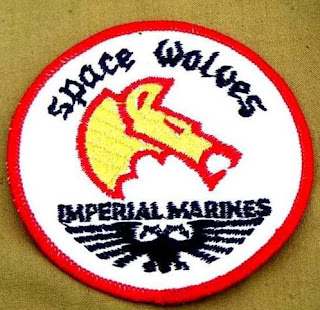 As you can observe, the Space Wolf symbol has seen the most change, not only in shape and size, but also in colour selection. In fact, the wolfshead looks strangely primitive, though this may have been down to the limitations of the embroiding technology at the time rather than a deliberate design choice. The addition of an early Imperial Eagle is also a nice touch.

An additional comment for all of the badges is that each chapter are referred to as Imperial Marines, rather than the more generic Space Marines,  inline with the original Rogue Trader plastic multipart kit.

I love this final badge. The choice of colours, blue and yellow, is most pleasing to my eye and the shape of the patch is striking. The addition of the skull in the centre is also a nice touch. A great design.

I must admit to really enjoying this little research mission and it just proves a point I have made many times. Even after many years collecting and writing about Citadel Miniatures and it's products and publications 1985-92, there are still new things to discover and learn about. Confession time remains though, and I am intrigued to know how many of you dear readers picked this up back in the day and if any of you managed to attach them to your clothing or bags.