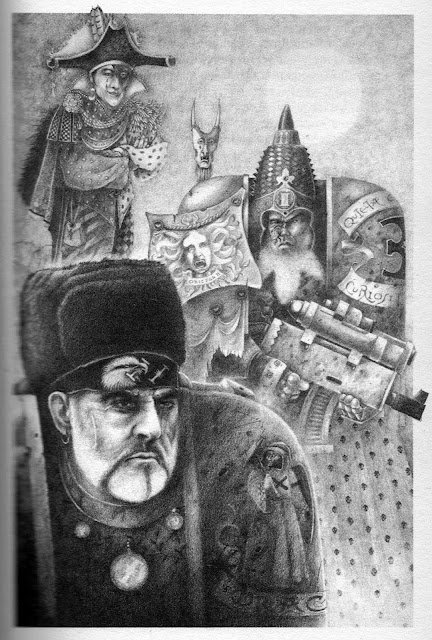 How many of you recognise this illustration? I must admit to not having seen it before, either. It was perched above the sales till at the Wargames Foundry the other weekend and spying it, I took it over to Bryan Ansell and Tony Ackland to ask them about it.

It is, obviously, a piece of art produced by the one and only John Blanche and the characters depicted are from the Inquisitor novel, published in 1990, which was also the first ever Warhammer 40,000 novel incidentally. 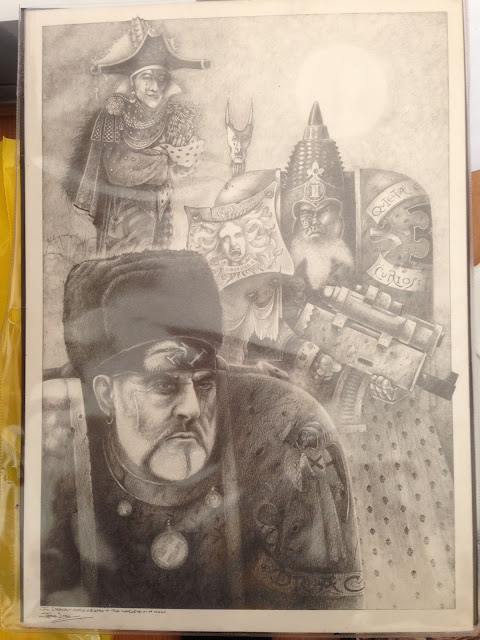 Here is the original work, still sealed inside it's protective plastic sleeve. Studying the picture took me back to that early version of the 40k universe. Nothing was really set in stone and we learnt about the place over the years through short stories, colour text and the reams of reams of illustrations that appeared in White Dwarf and other supplements. The gaps in this world were deliberately vast, and into those vacuums our own imaginations were set free to contrive all manner of dark and dangerous things.

The first thing that strikes is the face of Jaq Draco. It is obviously a take on Sean Connery in Russian garb taken, apparently, from a still from the Hunt For Red October, though Bryan felt that the eyes and eyebrows were closer to Blanche's own.

It was Harlequin Man (top left) that captured the flow of the conversation, as he was based on none other than Mr Robin Hood, Tim Pollard. Bryan went to say that the Harlequin Man figure appears in other John Blanche art. Can anyone else think of any pieces in which he appears?

It's funny what can be learnt buying a few pots of paint at Stoke Hall!