Warhammer Armies: An Acceptable in the '80s Special 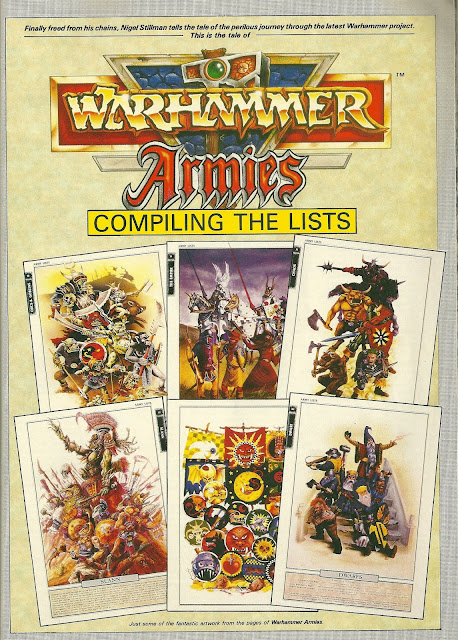 Yes, this is the second version of this post entry. The first one was published, but somehow I managed to delete it shortly after publication. I am not entirely certain how I achieved this feat of foolishness but I did, so there you go! So I find myself in the unenvible position of having to re-write what I have already discussed, something that I am not really that sparking with enthusiasm to do, so I have decided to write a completely different post instead. I am sure that some of the waffle my first post contained will be reproduced, but if you were one of the few people who got to read the original, I am sure that some of the old waffle will return too.

So where are we in this history? Issue 106 of White Dwarf actually. It contained a short article by Nigel Stillman (who I would love to interview, if anyone knows of his whereabouts these days) in which he discussed the 'why' and the 'why nots' of Warhammer Armies, the penultimate hardback supplement for Warhammer Fantasy Battle Third Edition. By this point, WFB3 was about a year old. The rulebook had been launched in the style of GW's output in the mid '80s; a large, hardbacked book with an impressive cover painting and loads of high quality (and varied art) in both black and white and full colour. This had been followed by Warhammer Siege and later, Realm of Chaos: Slaves to Darkness which both followed the same pattern. Warhammer Armies was to be no different, only this book would contain not only army lists but actual images of GW stalwarts and their armies.

I will resist the temptation to publish them all. It will spoil the retro delight readers will experience when they first purchase this book and flick through its musty pages. So let these few pages serve as an appetite wetter for the future (for those who do not yet own this book) and a nice reminder for those who do.

Now, for those of you who are in the former camp, you don't own the book, let me explain what you would be getting yourself in for should you decide to pick Warhammer Armies up. Firstly, you get the armylists themselves; and these can be split into major and minor lists. Forces like the Wood Elves, Dwarfs and so on get large lists and additional rules, while smaller forces (or contingents) like Zoats, Nipponese and Pygmy forces get a mention. There are plenty of others that I have not mentioned too. Another excuse to buy the book really, to find out what is in there!

There are also further rules for extra monsters missing from the Bestiary in the Main Rulebook itself; with the unicorn and Temple Dog being two of these intriguing beasts. There are also lots of magic item generation tables for weapons, banners and amulets and so forth. These really are excellent and are full of brilliant ideas.

Right, back to Nigel's article then. Its well worth a read, so I'll include it all below. It contains several (to me, anyway) vital quotes because, with the growth of Oldhammer, Warhammer Armies has become rather controversial. The concept of having 'one book to rule them all' is relatively unknown to many younger gamers, who have grown up in an age of army books, but it really is possible to play Warhammer Third Edition with just the main rulebook. All the races are described, special rules provided and associate posts costs included. Warhammer Armies provides a framework with which to construct armies in more detail, as well as including different types of troops not mentioned before. It is not a 'legal' document that must be adhered to rigorously.

I am starting to see people interested in Third Editon writing things like (and I paraphrase) 'I only need five more models to have a legal Third Edition Dark Elf army' and 'I am not sure I can field my army yet, Warhammer Armies states that I have to have 20 skeletons as a minimum to field Undead'. These views are quite un-necessary when playing Warhammer Third Edition, and agreement on forces is largely down to your opponent, or even better, the GM who will create the game that you are going to take part it. 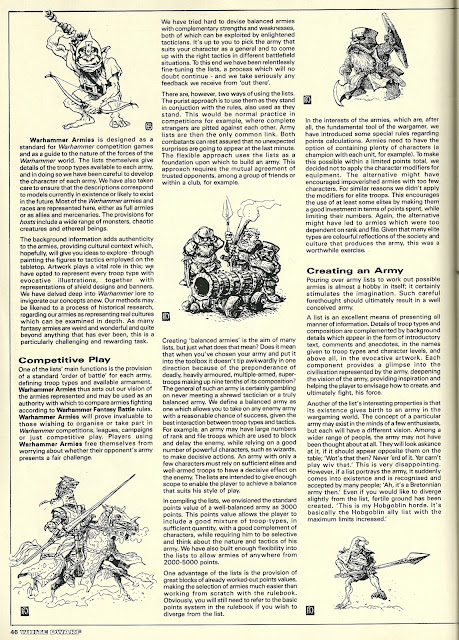 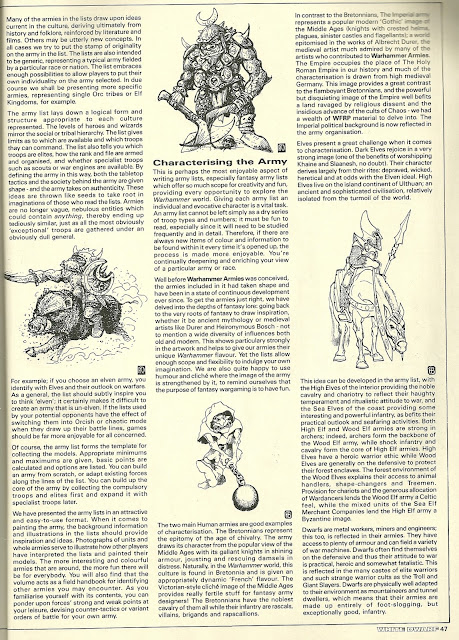 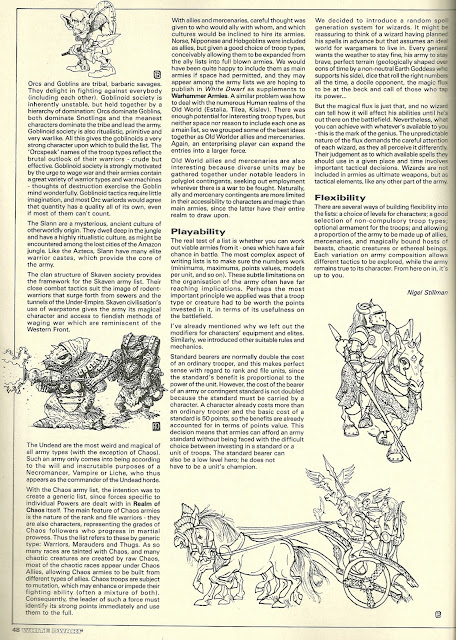 Now, there are two quotes worth discussion from the article about in my view. I will present them for you below along with my views why they are important in the rise of Warhammer Third Edition gaming, perhaps you will agree or perhaps you will disagree. You may even have another quote that you think is equally, if not more so, of importance to those that I have selected! If this is the case, then please share your view with us, either by emailing me at realmofchaos80s@yahoo.co.uk or using the comments box below.

Its up to you to pick an army that suits your character as a general and come up with right tactics in different battlefield situations.

That's right, it is up to you! There are no flavours of the month in Third Edition. No army that has just been released to clamour around. Nor will your list suddenly be withdrawn, changed or updated. Its static. This should allow the gamer and collector as many years as they would wish to spend creating and perfecting their force without any concerns that things will change. The term 'obsolete' often springs up to describe particular units and so on, on sites like Warseer. How can something suddenly become obsolete if there are gamers willing to play with particular models or rule sets? The same goes with terms like 'broken'. As all the lists for Third Edition (apart from the later chaos ones in Lost and the Damned) were written by the same few people at roughly the same time, the forces on offer to the Oldhammer general are, as far as I have experienced, fairly balanced. Sure, a daemonic army or a beastman horde are extremely powerful, and rightfully so, in Third Edition, but they are not unbeatable and daemonic legions cannot really be maintained outside the Realm of Chaos anyway, so are unlikely to be turning up very often. Now if you are building an army for narrative play, and quite frankly, most of us are, your forces need to be able to deal with more than just a set of given scenarios published in a book, the most likely one being a straight forwards fight across a table.

There are two ways in which to use the lists... the purists approach... and the flexible approach.

Yes, you read that correctly. You can choose to use the lists in Warhammer Armies as they are written, or you can use them more flexibly (or even not at all). This is something that some gamers find difficult to get their heads around, particularly those coming from a more tournament based scene. Quite why this is, is open to debate, because as others have said, there is nothing stopping a gamer being flexible with any army list published on any date. Its just curious that some many people (and to me it seems the majority) are obsessed with the official rules rather than just getting on with the job of having an entertaining and mutually enjoyable experience.

So if you are new to Oldhammer, or are interested in having a go at an older ruleset, I hope that this little article has helped clear a little of the muddy waters that seem to be swirling around what many of us are doing with Third Edition. Of course, if you have anything to add please do. You know how!