Nestled away among the pages of WD 101 is this rather short article. Its only two pages long in fact, and with a lack of pretty photographs or fancy graphics it is easy to miss it. What we have here is a short piece written by Peter M Haines concerning how best to win at Warhammer Third Edition.

Yes, that's win. Not take part in a structured, narrative led campaign where winning and losing is an arbritary notion unheeded by the players. Could this article be the first sign of what was to come? A harbringer of the tournament mentality (and by this I mean the mindset, not tournament gaming as a concept) that would blight GW games from the mid 90s onwards?

Also, as many of you will be aware, I am building up a Khorne army for WFB3. What advice on its construction could I gleam from these two short pages?

Well, let's investigate and found out, shall we? 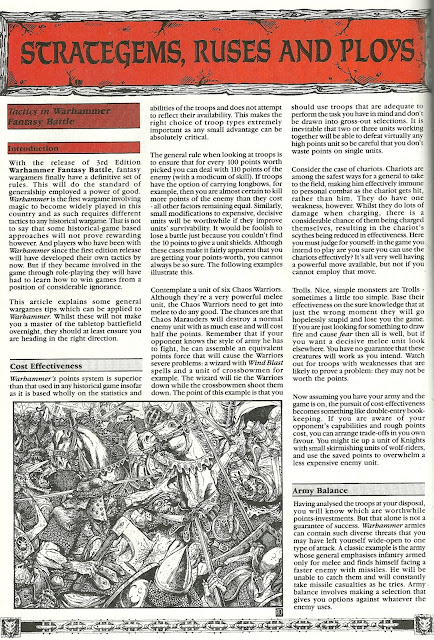 "With the release of 3rd Edition of Warhammer Fantasy Battle, fantasy wargamers finally have a definitive set of rules." This is certainly a strong sentiment. And one that I agree with, for my fantasy wargaming needs that is. WFB 3rd is so ingrained in my soul as a fantasy battle system (and background) that no other will do... Its a personal thing, so please don't condemn me for it. I've tried other systems and just don't enjoy them as much. After all, WFB 3rd has a 25 year head start and I own thousands of Citadel miniatures from the period that are just screaming out to be played with. Now I am now foolish enough to use the quote above as a lumphammer with which to beat other systems, or even later editions of WFB, with; I know that Haines was preaching to the converted, not to mention writing from GW's house magazine.

But he does go on to make some interesting points and share some old school tactical advice which may well be of some use for us Oldhammer Generals - especially with many of us heading to The Foundry this summer to play games of Third. The first thing Haines talks about is as relevant then as it is today, certainly in the minds of uber-armylist authors: cost effectiveness! He states that for every 100 points you spend on your army, you should hope (with a little luck and skill) be able to deal with 110 points of enemy action. This certainly makes sense. Haines uses the example of Chaos Warriors and Chaos Marauders, two very similar units but ones that vary wildly in points cost. Remember, Chaos Warriors were rock hard in 3rd Edition, they were (as they still should be) the elite of the chaos mortal warriors, not mere cannon fodder to be fielded. Marauders don't quite pack the punch of Chaos Warriors, but they are indeed far, far cheaper. This got me thinking about my chaos army I am working on at the moment. My plans for building the force are based on the armylists in Slaves to Darkness and Warhammer Armies, and too be honest, I am working through the lists in an attempt to field each of the list units. This drives my painting and collecting, but if I was to ever look at creating an army to play an extremely tactical game, those chaos warriors may well find themselves busted down to marauder level.

Chariots also get a discussion. Now I have two painted examples of these. An undead one and my Khorne Chaos Chariot. Now I have yet to field either in a game, so I am largely unfamiliar with the rules as they stand in the WFB3 rulebook. Haines gives a good point though, for these units will be super expensive and would have no doubt created in my mind a sense of them being invulnerable. Then comes the trolls. Now this is something that I do have experience with. Good old Throgg, the troll in the Throng of Exquisite Pleasure, has been field in many skirmishes but insists on failing his stupidity test every time. It has happened so often that it has become a running joke between Dan and I. However, Throgg once managed to stay on task long enough for vomit the contents of his stomach over Dan's warhounds (killing one and severely wounding another, before causing half his warband to flee in terror of his sheer size. Stupidity is a curse, and a damn fine rule too. It brings a real sense of uncertainty to battles, which of course, makes the playing of a conflict more realistic, as throughout history there are examples of units not doing what they are told, with mixed outcomes. But for a more serious game of WFB3? Are they really worth their points?

Next, the article moves on to discuss Army Balance. "Warhammer Armies can contain such diverse threats where you have left yourself open to one type of attack." Well, this is certainly true of my Khorne army. Its slow and relies on close combat. Fast moving troops and missile troops could well be a problem for it, though I have a chariot to counter such things, and of course my Chaos Dwarf artillery. 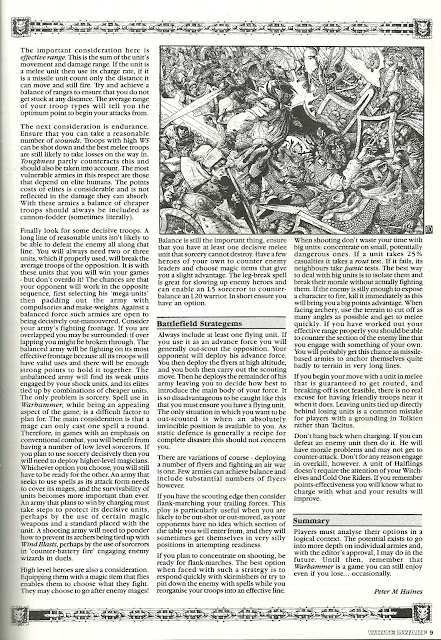 "The important consideration here is effective range. This is the sum of the unit's movement and damage range. If the unit is a melee unit then use its charge rate, if it is a missile unit count only the distance it can move and still fire. Try and achieve a balance of ranges to ensure that you do not get stuck at any distance . The average range of your troop types will tell you the optimum point to begin your attacks from." Hey, this a a great idea and not one that I have had before. Is it mathhammer? Or just clever gaming? Hmm, I am not so sure... He makes another interesting point about armies that rely on elite humans, as they are expensive troops but lack the ability to soak up damage with low toughness and wound scores. Better keep an eye on those thugs then!

When talking about character models, he gives an interesting piece of advice. "High level heroes are also a consideration. Equipping them with a magic weapon that flies enables them to choose what they fight. They may even choose to go after enemy mages!" Hmm, the generic magic items in the back of Warhammer Armies need careful perusal it seems, not something that I had thought about doing before! The use of magic items seems very important in Haines view of WFB3, after all you must 'ensure that you have one melee unit that sorcery cannot destroy.' As far as I can tell, magical support via items or standards is the only way to do this.

The section on battlefield strategies is also of great interest. Here, Haines states that you should always have at least one flying unit. Well, this is going to be easy to do if you field a dragon or some other flying beastie, but magical items will do the same for characters as will spells for sorcerers. As well as going on about the standard strategies that can be used on the field of battle.

To conclude, what can we draw from this article? Certainly the 'to win' ethos existed in the later '80s and Warhammer Armies was created to support competitive gaming, though the word tournament is curious by its absence. What can we Oldhammerers draw from this? Well, I am going to go out on a limb and say this. When approaching battle, with our painted forces before us, we should make every endeavour to take the role of the commander of that army. He'd want to crush his foe, wouldn't he? So we should embrace the narrative slice of gaming goodness that we are taking part of, but we should never skimp on the character driven need to 'win' in the context of the story we are acting out.

As always, this article is open for discussion. Have you anything to add to my incoherent ramblings? What did you think of Haines' article?