Welcome back to our nostalgic dip into WD 96. The December issue of White Dwarf was packed full of Citadel releases with most of the sculpts appearing in full colour. Soon this was to become fairly standard, with new models appearing in painted form before a black and white version was shown in the back of the magazine. 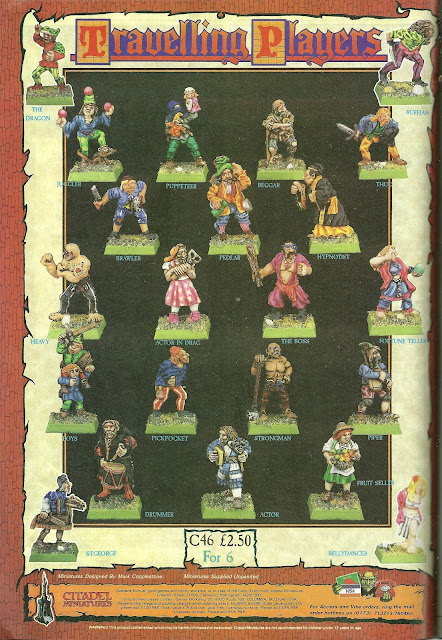 We've hit one of the BIG BOYS of collecting with this set. The Travelling Players make up part of one of the most sought after sets of Citadel miniatures on the scene today. Often described with the umbrella term of 'Warhammer Townsfolk' (though some sets were advertised with that header) these everyday folk of the Warhammer World are hot property on eBay with LARGE prices regularly cropping up. When you look at the models on offer you can see why. Each one is different with many sculpts being humorous mockeries of British stereotypes - just look for the Punch and Judy man, St George and his dragon and the rather fetching actor in drag. Gamewise, there is little these models can really contribute in a battle game (other than window dressing for town based games) though I can imagine that these models would be useful for Warhammer Fantasy Roleplay.

Over the years I have been tempted to start collecting these figures but always hold back. I know that as soon as I start I will be spending the twilight hours (and considerable ££££) searching from these illusive beauties. Lovely paint jobs of these examples; nice and bright and wonderfully shaded with the 80s Citadel inks.

I have discussed these models before and you can see what I had to say by following this link... drastic-plastic-warhammer-fantasy. I included the ad as it had some nice colour photographs that some of you may not have seen before.


Of particular interest to me are the command teams that were released alongside the boxset. These pictures show off what can be achieved with a couple of boxes of these models and four command figures. 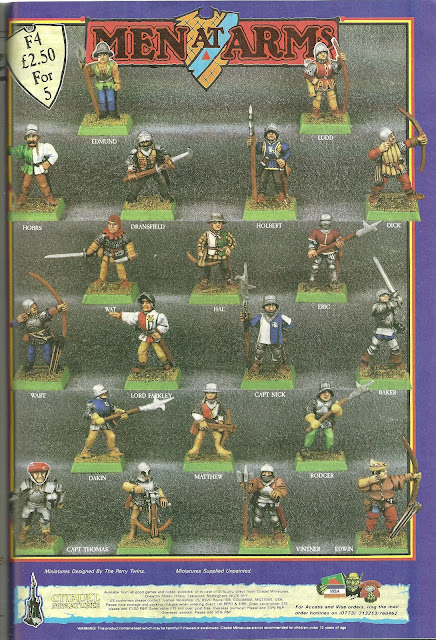 More proto-historical Perry goodness. This time we have some Feudal men at arms equipped with a wide range of different weapon types. As you would expect from Michael and Alan, we have a great deal of realistic armour and clothing. Looking through the set my mind calls out 'Wars of the Roses' every time I browse through the models. Obviously, for fantasy purposes these models would be useful for any Bretonnian general but are a little too boring for my fantastic tastes. 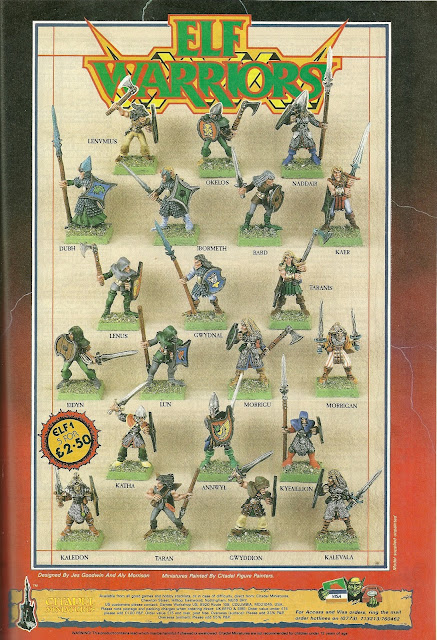 Well here we have the elves. I love this ad as it has such a range of design motiefs. Firstly, you have the classic 80s elf, high boots, hoods, long hair and a celtic whiff. Then come the forebears of the current range, particularly Dubh, with the long mailcoats and conical helms and the flowing haired waifs that wouldn't look out of place among the Wardancers.

This set has some new sculpts among many older ones, including models that were produced for GW's 80s Lord of the Rings range. I am glad to say that I own quite a few of these models but I have yet to paint a single one! This is unlikely to change as Elves are a long, long way off in my order of priorities. 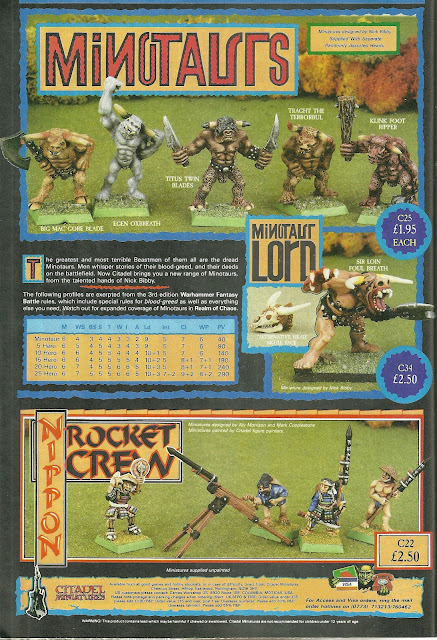 Nick Bibby's minotaurs were clearly a popular range as they turn up on eBay quite often. Here we have the examples that fit on a 25mm base. Regular readers of this blog may notice that three of this particular set have been painted and posted by me since I began this blog. I can speak from experience when I say that painting these lead lovelies is a joy and with all the little details sculpted on them they can be an engrossing little project. Yes, the names of the models are rather naff and the minotaur lord is a bit toothy but they are mean in game terms and every third edition player should have at least one of these monsters to push around a table.

On to Nippon and one of the few official releases from GW for this mysterious eastern state. Here they are in all their rare glory. I've seen this set quite often on eBay and have lost out several times to other bidders. I don't know why, but something draws me towards this set and makes me think 'buy me'! Perhaps its the relatively rarity of Nippon models or just the characterful 80s sculpts!