WFRP'd: The View from the Design Studio 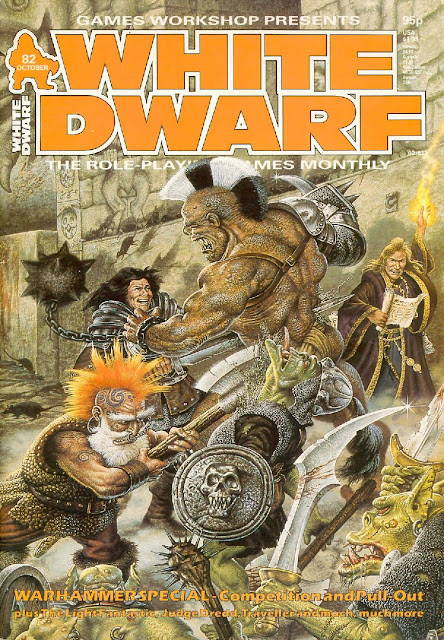 In my last post I began to chronicle the 30th anniversary of Warhammer Fantasy Roleplay and judging by your response this looks to be a popular series of blog posts. Today, I want to delve into a curious little article published in late '86 in our beloved White Dwarf of old. Now, for those of you unfamiliar with the magazine in the dark days of the last century, it ran a series of semi-regular columns called 'Open Box' in which new RPG releases were scrutinised by members of the editoral team.

If you got into Games Workshop in the later part of the 1980s this may seem curious to you, as the magazine I discovered in 1988 ran only in house adverts (mostly). Before Bryan Ansell decided to just focus on GW products, the magazine served as the voice of roleplaying in the UK, and had done so for over ten years by the time this article was published.

Of course, the cynic will no doubt point out that the authors of the Open Box columns were in fact employees of Games Workshop LTD, and this was indeed true, but judging by the Open Box columns I have flicked through, other manufacturer's items seem to have been reviewed quite fairly and the GW bias is slight. Looking back, the influence of GW's first decade as a retailer of fantasy games is still evident in it's waning years.

Anyway, onwards and upwards. This particular issue of Open Box concentrates in 'reviewing' (if such a verb is appropriate) our beloved RPG, Warhammer Fantasy Roleplay. Unlike the material we looked at last post, which set to advertise the product to us screaming fans, this piece seeks to explain a little about the development of the game and contains some interesting nuggets of information the Citadel historian would find interesting.

It is well worth reading. Take a look! 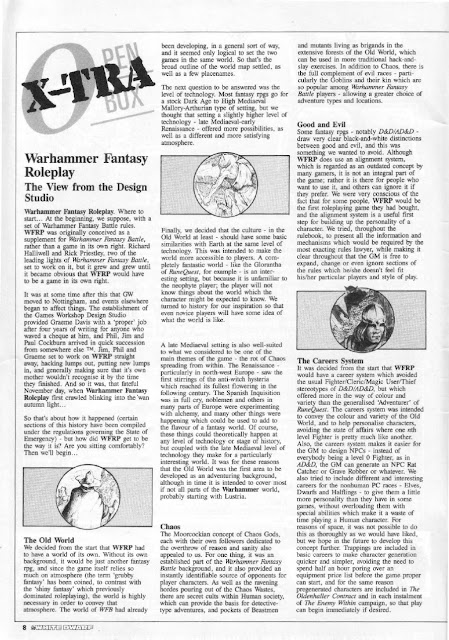 The first paragraph contains an interesting remark and I paraphrase when I state that WFRP was originally intended as a supplement for Warhammer Fantasy Battle. Well, I didn't know that it had it's origins there, and always assumed it was begun later. Of course, I know that lots of different hands shaped the game and different projects were merged or adapted to ease it's creation.

The second paragraph goes on to make light of the demise of TSR UK and the establishment of the famous '80s Design Studio. The BIG NAMES of WFRP are ticked off here too. If you are curious about this period of GW's history, then Paul Cockburn's interview we us is well worth reading. The link is here.

In an age before GrimDark the term 'grubby fantasy' seems to have described the background to the game and reference is made to the 'shiny, heroic' style of roleplaying prevalent in many D&D supplements and imitators. If you read on, the link between the 'rot of chaos' and the religious turmoil in Renaissance Europe is made explicit and is one that is now frankly blooming obvious, but has always alluded me. Another reference to the Lustria campaign is made here, and that it would be one of the first releases for WFRP. We all know how that one turned out.

Under the 'Chaos' subheading is evidence enough to trouble GW's lawyers in later years. Frank, unclouded admittance that Chaos and all its terrifying glory is directly inspired by the work of Michael Moorcock. Both Realms of Chaos (which saw release in two volumes) and Realms of Sorcery (which never saw release, at least until Hogshead did a version years later) get a mention on the second page. It is easy to laugh now at the admission that Realms of Sorcery would see print in 1988 but it is obvious now that a great many projects were planned, even developed but ultimately never saw the light of day.

Where they all are now is a mystery.