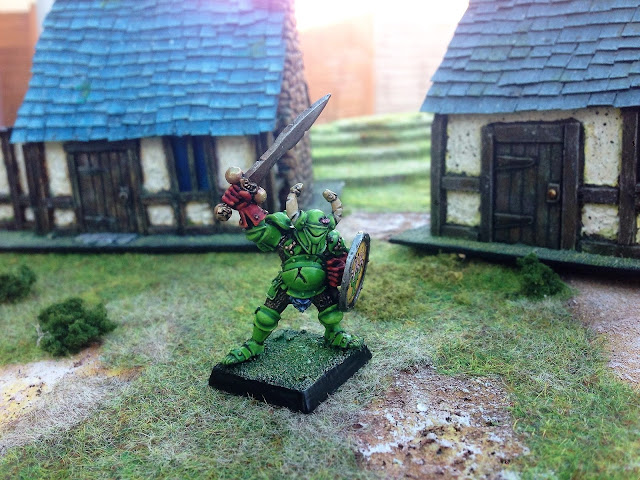 Published just time time to make my fellow gamer (Warlord Paul's) blog post out of date, points wise at least, I have returned to the business of A Tale of Four Oldhammer Gamers after a long absence. Sadly, we have had quite a bit to deal with family and work wise and hobby time has been seriously reduced. My mojo has also been seriously drained by the bleak winter light, but inspired by the glorious output of many a Oldhammerer I have picked up the brush once again and set to work.

The chaos warrior you see before you is the second model in my new Nurgle army, after the Palanquin of Nurgle I completed last time. If truth be told, I began work on this model in late October, and started work a proper in November. It has taken me just under two months to finish it. No wonder I am languishing at the bottom of our league table!

As with the palanquin model, I used the randomly generated charts in the Lost and the Damned to create the background to this model. There is a handy champion chart on p.209 and I rolled a d1000 to determine what my second character would have in terms of attributes. The dice came in with a lowly 44, so I hastily flicked through the book to find out what fate had in store.

Well, my second character would be a human and have Blood Substitution (maggots) and Agility as their attributes, along with chaos armour. You can field an infinite number of champions as part of your army, each costing 100 points at a base rate, so reaching the target each month shouldn't be too difficult, as if I am in a fix I can just roll off and create a new champion. The trouble is, some of them can turn out to be pretty weak and feeble, a bit like my leader, so there is always a risk. 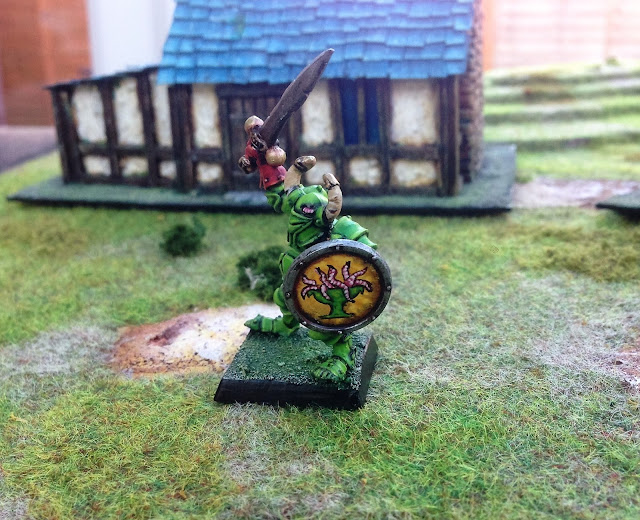 The model was pretty straightforwards to paint, if time consuming. As you might have guessed, I have painted A LOT of chaos armour of a variety of hues in my time, so finishing this was no real struggle. I used Foundry's bright green as a base before mixing in a little yellow and bleached bone to achieve the highlights. The shading was added using the same base colour I created with the addition of plenty of black and green ink.

I quite like using red alongside green, so chose a fairly dark shade to pick out the gloves. I opted for a cheeky blue spot colour too, on the fiendishly faced codpiece! Gold, again Foundry, was used to pick out a few details here and there and silver drubrushing brought out the detail on the chainmail and sword. I used a series of glazes to cut back the brightness of the silver paint and make the figure look a little more dirty.

The Lost and the Damned has some great ideas for iconography and I wanted to do something a little different on his shield. I chose the plague chalice design and painted it up on a yellow background (chosen to contrast with the green) but used a very similar green for the cup - to help tie the shield back in with the rest of the model.

If you look at the chaos warrior model, you might notice that it has several maggots or worms wriggling from within. I painted these up using a nice pink created by mixing a dark red with pure white. I repeated the maggot idea on the shield - again to tie the two together. 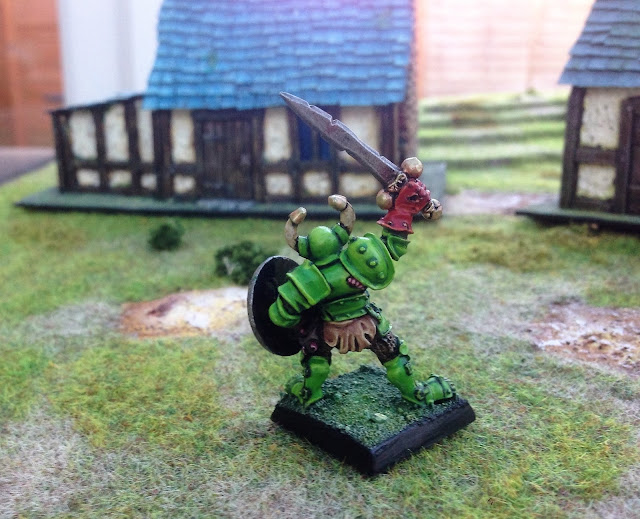 Having now completed two character models I am going to opt for a proper unit for January. As I love the old plastic GW skeletons, I am going to do a unit of them. In the Nurgle list, they are known as plague skeletons - and will need an undead hero or chaos champion to lead them. If I plan to paint 14 models - this will take me up to 140 points for the skellies plus whatever the leader of the unit will cost. Of course, If I upgrade the unit further I can probably reach 200 points, which would make up for the month of November that I missed.

Right, I am off to finish a couple of other painting projects.