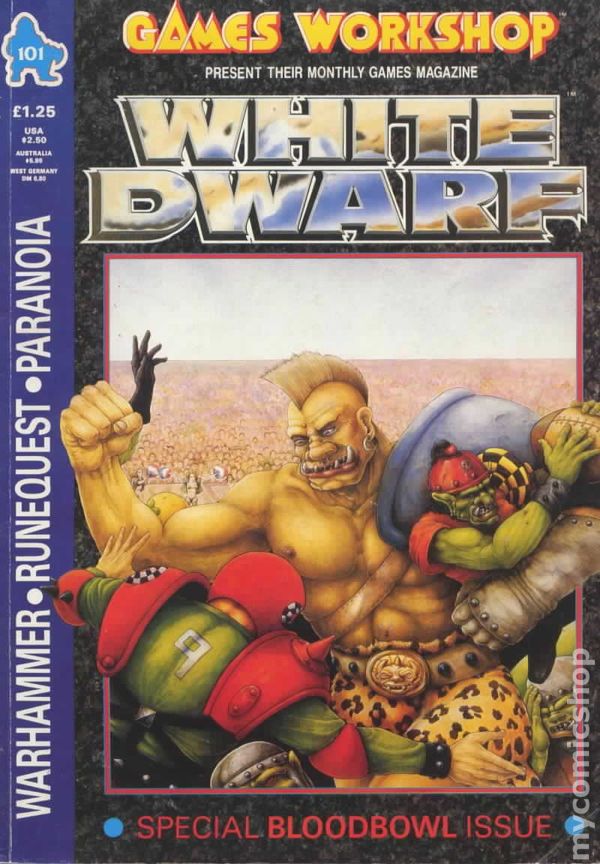 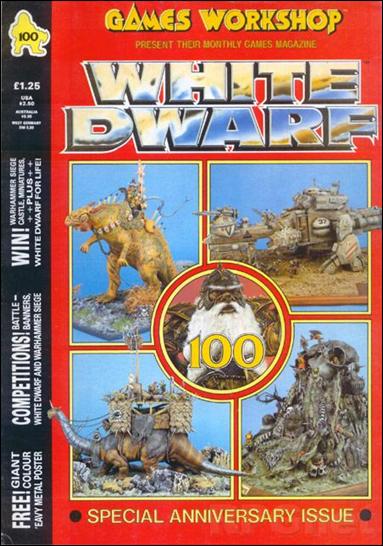 Introduction
After all the interviews and articles concerning Slaves to Darkness and life at GW in the 80s, its exciting to return to the pages of Old School White Dwarf in search of more Warhammer Third Edition material. Today, its the Warhammer content from issues 100 and 101.

The times are clearly a-changing, a fact not missed in the letter pages of these mighty magazine, with readers commenting that WD has rapidly become a 'house magazine' focusing on GW and Citadel products rather than pure roleplaying. But as we know now, sales of roleplaying games were in serious decline while sales of fantasy, and science fiction, wargames were rapidly on the rise.

Issue 100 is, largely, a celebration of this past without actually providing much content dealing with traditional roleplaying. However, its does focus on fantasy modelling in a big way, and for the first time, miniatures appear on the front cover. Issue 101 sees the launch of 2nd edition Bloodbowl, with a great deal of pretty pictures and miniatures on show. The changes are increasingly clear by now, with no out of studio material at all, save the soon to be culled classifieds in the back of the magazine. The pattern of Warhammer releases follows its current downwards trend, with only a single advert (the wonderful Elf cavalry below) in 100 but major developments were just around the corner. Issue 101 sees more WFB content and details the iconic release of the Mighty Fortress, Citadel's polystyrene castle and makes reference to the first supplement to WFB3, the complex Warhammer Siege.

Elven Cavalry
I much prefer the '80s look of the elves than the overblown po-faced designs of the 21st century. Here we have a series of mounted figures and a few spearmen. The models themselves are well proportioned and varied, with a mix between spear, sword and bow, providing the gamer with an opportunity to field units of each if they so desired. The tall helms and long chainmail coats have a faint middle eastern whiff about them and an effort has been made to sculpt horses that look different than the standard human one. These mounts are smaller and more graceful, much like their riders, though they are limited to two poses. This does effect the overall look of the models when seen together, as the advert above shows, as with skillful painting each horse can be made to look quite different.

The Mighty Fortress
I always appreciated the fact that the Mighty Fortress was peddled to us as an accessory for both Warhammer and  Rogue Trader. I loved the idea of Medieval Worlds, where a few aliens could manipulate the masses and take power, only for some off world rivals to arrive and recruit local allies. The mix between RT and WFB rules was always exciting and varied. Best suited for skirmish games, narratives based on this simple premise are brilliant fun and were sadly missing from later editions.
So what did you get? A quick glance at the image below can provide more detail than I can express here, but basically, you got four towers, four wall sections and two gateway sections as well as loads of plastic doors, hatches and gateways. I'd always wanted one of these but lacked the funds back in the day, so a decent copy of the castle was one of the first purchases I made after I 'went retro' about two years ago. I remember the enormous package arriving in the back of a Royal Mail van and tearing the brown paper off with great excitement. The castle is very tactile. It feels light but solid and has the polystyrene familiarity that takes you straight back to toys and Christmases of old. Sure, there is better detailing today among plastic and resin castles, but the simple charm of this set compliments '80s models perfectly. The downside is, of course, the fragility of the castle itself. A hefty knock and the straight, even lines are characteristically, for polystyrene, damaged. However, this does make any conversions very simple to achieve.

Dwarf Gyrocopter
Zany inventions and crazy ideas were, and are, one of the major attractions for WFB3 era models and rulesets. If someone had a good idea for a model, it was usually made and some rules published alongside the release. The Gyrocopter is a lovely example of this. Sculpted by Mark Copplestone, the model is detailed and fantastic, but shares enough of real design to be believable. Its not a piece I know much about, not having and example in my own collection but I is certainly a model I'd be keen to own at the right price. 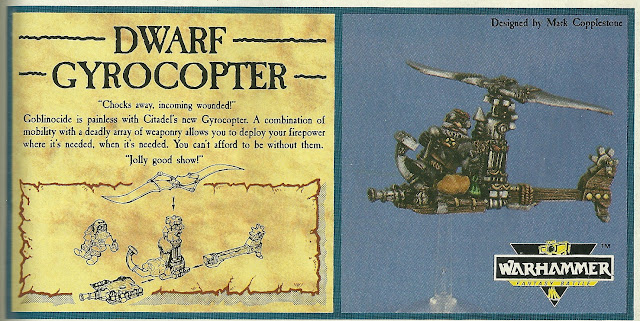 The rules for this model were published in WD101 and are presented to you below along with a bit of background. They were written by Richard Halliwell and illustrated by Pete Knifton. One aspect of the models use in games is the fact that you can use a single model as a mount for a high level character. Fancy putting your dwarf general in one of these? I would if I had one. 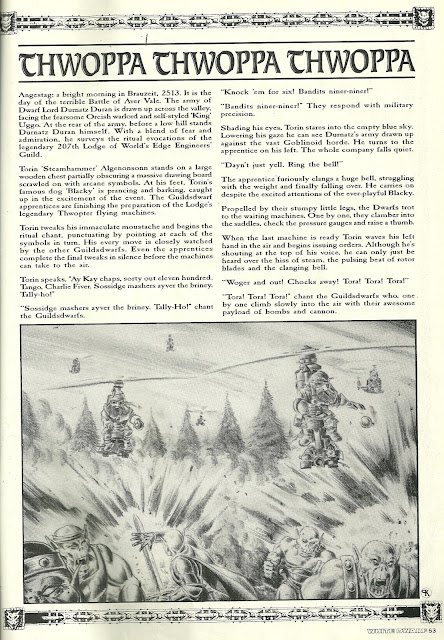 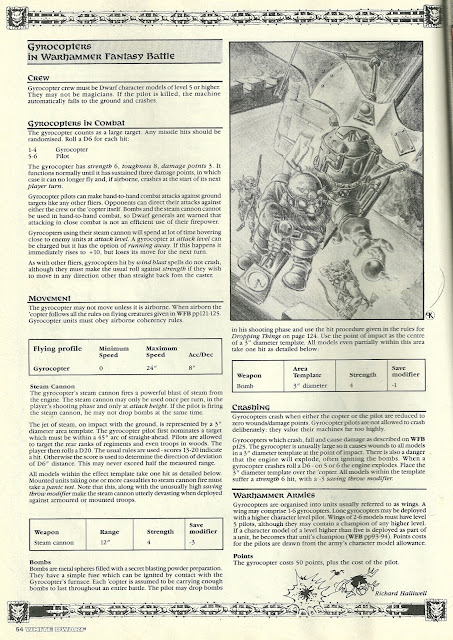 So, we have moved from issue 93 to 101 and seen Warhammer: The Game of Fantasy Battles released and seen an abundance of new models, and re-released sculpts appear in the pages of White Dwarf. The game was about to see its first supplement release, Warhammer Siege, which would expand the gameplay of both WFB3 and Rogue Trader, as well as provided a reason for dropping your Mighty Fortress into your games.

We will discuss the book at length in our next discussion of what was 'Acceptable in the '80s.'

Email ThisBlogThis!Share to TwitterShare to FacebookShare to Pinterest
Labels: Acceptable in the '80s, Dwarf Gyrocopter, Dwarfs, The Mighty Fortress